Share All sharing options for: Dolphins Safety Battle - The Position Battle That Wasn't

Leading up to the start of the Miami Dolphins 2012 training camp, safety was seen as one of the biggest holes on the team. It was a position in which Reshad Jones had claimed one starting position, while Chris Clemons, Jimmy Wilson, and Tyrone Culver were thought to be in a three-way battle for the other starting job. Apparently, we were all wrong on that one.

The Dolphins have not wavered from Jones on one side, and Clemons seems entrenched on the other. Culver has been permanently behind Jones, while Wilson, who is switching from cornerback in his rookie year to safety this season, has been behind Clemons.

The only time any of this has changed was when Clemons was rehabbing an injury early in camp, leading to Wilson to work as the starter next to Jones for three straight practices. Once Clemons returned, Wilson was once again regulated to a backup role.

Wilson also had the one notable safety play of the first preseason game. 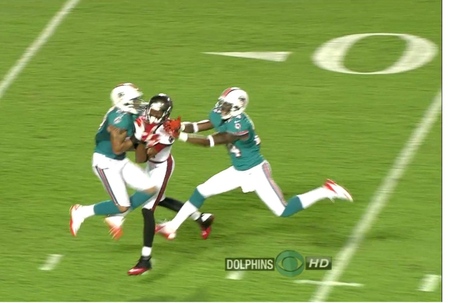 Wilson had a clear play on the ball, and should have come down with the interception. However, he tried to cradle the ball, rather than attacking it at its highest point, ultimately his effort essentially headed the 44-yard completion to Buccaneers wide receiver Tiquan Underwood.

A play like that will not add pressure to Clemons' hold on the starting role.

Ultimately, it seems like the safety position is set, despite expectations that this would be one of the biggest competitions in camp this year. Now, if only Jones and Clemons can solidify the position against opposing offenses, the Dolphins may have a better start to the 2012 season than they had in 2011.