Share All sharing options for: A Phinsider Look At Training Camp: Day 5

It was another excruciatingly cold day in Davie; the scarfs were out, the mittens were on, and absolutely no one could see the players through all the snow…yea…I wish. The blistering heat from the field was not going to stop head coach Joe Philbin from making these players have the fastest paced practice in the NFL. Let’s see how well these 53 men performed on Wednesday morning.

Players came ready to compete right off the bat today as both sides of the ball made it their mission to catch the applause from the stands. Vontae Davis started out the drill with a lunging swat at a ball intended for Marlon Moore. However, it was Davone Bess that would avenge Moore as he made a leaping catch that had the defense a bit star struck. After David Garrard did his work on the 2 min drill going 7/9 for 54 yards, it was Matt Moore’s turn to take the field. Moore went 4/6 with a 40-yard touchdown bomb to Roberto Wallace along with a 5-yard slat route TD to Wallace as well.

Story of the Afternoon: Ryan Tannehill—Tannehill performed excellent on this 2 minute drill; looked like he might give David Garrard a run for his starting spot. He threw three perfect passes to Chris Hogan and two nice 7-yarders to B.J. Cunningham (who finally made an impact on the field today). Could he keep it up though?

Right after the 7 on 7 drill, Joe Philbin called out Ryan Tannehill and Pat Devlin, along with Chad Johnson, Vontae Davis, and Marlon Moore to the closer side of field for some 1 on 1 WR:DB action, while Matt Moore and David Garrard worked against the line backers on the far field.

I decided to keep an eye on Tannehill, just to see what he was really made of. In a span of about of 5 minutes, Ryan Tannehill made Pat Devlin look like what he dropped on his toilet before practice. Tannehill was precise on all of his passes connecting with Marlon Moore on a 35-yard beauty of a throw, and minutes later with Rishard Mathews on a 40-yard pass. (Mathews burned Vontae Davis on that deep pass) Overall, Tannehill showed me that his deep and short-field accuracy is excellent, however that was without pressure.

On this 11 on 11 drill, most of the plays called were runs, unfortunately they were not all runs

David Garrard: The little action that Garrard had throwing on the drill was all I needed to see. Garrard went 0/1 with a sack -___-

Matt Moore: If anyone could do worse that Garrard on the drill, it was Moore. Moore went 1/4 on the drill with two swatted passes. However he did have a nice 25-yard pass to Legedu Naanee close to the corner of the endzone.

Ryan Tannehill: Sadly, Ryan Tannehill showed us why he’s a rookie during this drill. He had no sense of urgency and once he finally noticed the pressure, it was too late too react, which in turn lead to many passes to the ground or the sideline. RT went 2/6 on the drill, including one swatted pass by Jamal Westerman, but also a drop by Charles Clay.

The defense was on point throughout the day. They knew it was the first practice with live tackling and they decided to make it known which side of the ball is truly better. As we know, Jamal Westerman had a wonderful smack at a bullet thrown by Ryan Tannehil on the drill, others who contributed were: Russel Anderson who caused a fumble, and Richard Marshall who broke up a well-thrown pass from Matt Moore.

On this drill, David Garrard separated himself from the pack as to whom is in the lead for that starting role.

Matt Moore: Saying Moore had a mediocre drill is an understatement. MM went 2/3 for 18 yards, sacked once, along with a would-be-pick-6 to Reshad Jones.

Ryan Tannehill: Since Tannehill was still being pressured by the defense on the drill; he came out a little flustered and threw an embarrassing 0/4 (none of the passes were even close to the receiver)

David Garrard: Although he only threw the ball three times, David Garrard connected twice with Davone Bess for two very nice touchdowns; both going for about 10 yards each.

Reshad Jones: Picked off Matt Moore for what would have been an easy pick 6.

Tony McDaniel: McDaniel leaped into the air and smacked one of the many underthrown balls that Matt Moore threw today.

Davone Bess: "Ima let you finish, but Davone Bess is having the best training camp of all time." Seriously though, Davone Bess is having a ridiculous week at camp. Sean Smith keeps talking and talking about how no one can get passed him, however, in this case Davone Bess decided to leap over him on a fade route and bring it down for a touchdown. Sad Omar Kelly is sad.

There were two things I was specifically looking for during this drill 1) Ryan Tannehill’s consistency without pressure 2) If Matt Moore can get out of his funk.

David Garrard: Garrard had a pretty good outing going 2/4 for 32 yards including a dropped pass by Chad Johnson.

Matt Moore: Matt Moore came back with a fierce vengeance on this drill...going 0/4. Matt Moore is one of those guys that never truly excels at practice, however this was a bit too much on the disappointing scale even for his standards. Two days ago Moore said he was somewhat in the middle as to how he wants to be; this outing today proved that he’s a bit farther back than "the middle."

Ryan Tannehill: Tannehill kept his composure and had an excellent outing on the only 7 on 7 drill of the day. Tanny went 5/7 and threw for 41 yards, including big time plays to Marlon Moore & Lamar Miller, who seems to be a favorite target of his.

Philbin seems to be ending all of his practices with a nice 2-minute drill just to see who ends on a high note. David Garrard and Matt Moore were the only QB’s to compete.

First Quarterback up was Matt Moore. Moore needed something to brighten up his day, because obviously the skin burning sun wasn’t doing its job. Moore started out the drill with a nice checkdown pass to Reggie Bush for 6 yards. He followed up with a 10-yard strike to Marlon Moore and and beautiful 15-yard pitch and catch to Chad Johnson, who laid out his whole body for the catch. As Matt Moore geared up to what was about to be the last play of his day, he noticed a wide-open Charles Clay for a sure-thing touchdown. As the ball hit the hands of Clay, Moore was already celebrating, however it was all for nothing as Chuck 42 dropped his second pass of the day.

Now it was David Garrard’s turn to outshine the gloomy Moore. Sadly, Garrard was frustrated after the first four snaps. He was frustrated not with himself, but with others. The first 4 snaps resulted in {false start, false start, Charles Clay drop, holding} Now you understand his frustration? Luckily, Garrard shrugged that dirt off his shoulder and threw an 80-yard touchdown MONSTER to my Cinderella player, Roberto Wallace.

EXTRA NOTES: My players of the day are obviously Roberto Wallace, who had a phenomenal day today racking up over 125 yards and 3 touchdowns, Reshad Jones, who was all over the field, and David Garrard, who continues to impress fans.

My dissapointing players of the day are Jeff Fuller and Charles Clay. Chuck 42 dropped 3 major passes today, which is very uncanny for a player of his caliber, and Jeff Fuller dropped two balls and fumbled another (very disappointing to say the least) 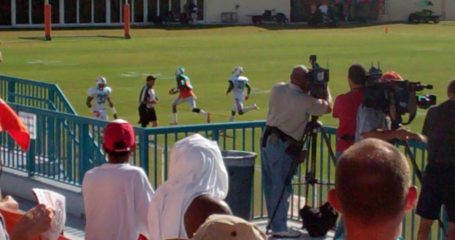 Rishard Mathews showing off his burners to Vontae Davis 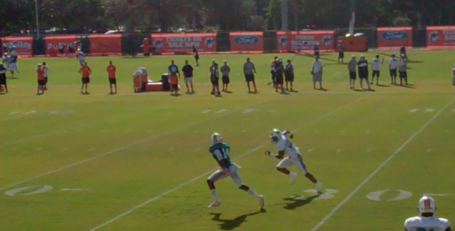 Marlon Moore shaking away his defender to get wide open.

Ryan Tannehill showing off his arm to the fans. 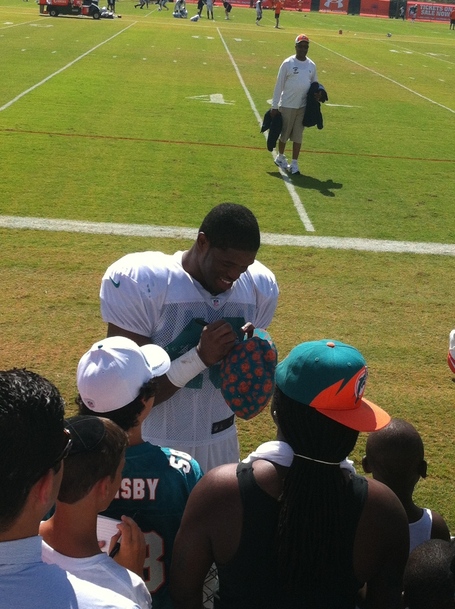