Share All sharing options for: A Phinsider Look At Training Camp: Day 2

After a long, arduous, and very tiresome year, I’m excited to say that football is officially back in session. As the clouds loomed & circled around the Dolphins training facility in Davie, it was the sun that shined down on the field as it waited for the 53 competitors to make their mark on this team. Yesterday it seemed as if David Garrard outshined Matt Moore in almost every category. Now with the majority of the first team reps, Garrard sought out to truly identify himself as the starting quarterback for your Miami Dolphins. Let’s take a look at how the players performed on an excruciatingly hot day 2 of camp.

NOTE: I got to the practice a little late due to car problems and missed one of the 7 on 7 drills, so bear with me.

Both the first and second teams had their backs facing each other on separate 40-yard lines; both trying to gain the full attention of an anxious crowd.

David Garrard: Garrard slowly got the tempo going by connecting on a quick strike to Brian Hartline (who was limited) right on the sideline. Immediately after, Garrard got his fullback in the action as he and Charles Clay connected on a beautifully thrown 20-yard pass. He’d finish off the drill going 1/4 with one drop by Chad Johnson.

Matt Moore: Like Garrard, Moore also set the tempo at the beginning of the drill connecting with Roberto Wallace for a nice 10-yard completion. Moore ended the drill going 2/3 for 19 yards.

Charles Clay: Caught a 20-yard pass and a 6-yard pass from David Garrard.

Roberto Wallace: Caught a 10-yard pass and 6-yard pass on a cut from Matt Moore

Michael Egnew: Dropped a high pass from Pat Devlin leading to an int. Also caught a 6-yard strike from Moore.

Lamar Miller: Miller cut down the middle of the field for a 13-yard pass from Moore.

Chad Johnson: Dropped an easy pass from Garrard as he fell to the floor.

This time Matt Moore was given all the 1st team reps as Garrard looked from the sideline. Pat Devlin was given a chance with the second team. However this drill was more run focused.

Matt Moore: Moore had a very respectable showing on the drill going 2/4 for 35 yards and an 8-yard run.

Reggie Bush: Reggie got a piece of the action with a nice 8-yard run down the middle.

Lamar Miller: Miller keeps impressing us with his quick feet by busting through the outside for a solid 15-yard gain.

Daniel Thomas: Thomas got the majority of the carries on the drill going 3 carries for 26 yards.

Jerome Messam: Messam had a nice bounce back 11-yard run on the left side.

Charles Clay: Clay once again had a good drill by getting open for a 20-yard strike from Matt Moore.

Nolan Carroll: What seemed to be a perfectly positioned throw by Matt Moore was really an opportunity for Nolan Carroll to show his hops as he deflected what would have been a 25-yard catch by Legedu Naanee.

Josh Kadu: The Oregon Duck showed his athleticism as he spread his body out to deflect a pass intended for Lamar Miller.

As I mentioned earlier, I was not around for the first 7 on 7, where Julius Pruitt leaped over Vontae Davis for a spectacular touchdown catch, but let’s look at how the second drill went.

David Garrard: Garrard had an outstanding 7 on 7 with the first team going 7/8 for 52 yards. Every pass was a quick delivery; rarely looked deep.

Matt Moore: Matt Moore needed to somehow step up his game in order to match Garrard’s previous drill, and he did. Moore went 4/4 for 47 yards.

Pat Devlin: It’s not like he has that much of a realistic chance to make the team, but Pat Devlin gave us a nice little show on the 7 on 7 drill as he went 4/4 for 67 yards and a touchdown.

Anthony Fasano: Fasano made what seemed to be his only reception of the day during this drill, catching a 10-yard pass on a short-out.

Clyde Gates: Clyde Gates finally made an appearance as he caught a 15-yard bullet from Matt Moore on a post route.

Chad Johnson: Ochocinco had a couple catches on the drill; all from short cut routes. (About 12 yards total)

Marlon Moore: One of the more interesting players in the WR battle, Marlon Moore, came to play on the 7 on 7 as he snatched away a 13-yard throw from Matt Moore into double coverage.

I would call this "11 on 11 #3," because after all, at the pace that Philbin is pushing these players, it seems as if every drill is a 2-minute drill.

David Garrard: Garrard finished his day off with the first team. He went 1/3 for 10 yards…yea… they ran the ball most of the time. One thing I noticed on this drill was that Garrard failed to see a completely wide-open Chad Johnson twice; three times throughout the day.

Matt Moore: Unlike Garrard, Matt Moore finished his day on a high note going 4/5 for 50 yards.

Pat Devlin: Devlin went 4/4 for 44 yards to end his day. Overall, Devlin had one of his best days at camp as a Dolphin so far.

Jeff Fuller: Fuller caught the last pass of the day as he received a 20-yard throw from Devlin on a wheel route.

Rishard Mathews: Mathews joined in on the fun on Saturday as well by catching a 6-yard pass from Devlin.

Marlon Moore: There was another sighting of Marlon Moore, as he caught a nice 13-yard pass from Matt Moore on a comeback #MooreToMoore.

Julius Pruitt: Pruitt had a good 10-yard gain off a slant route.

Roberto Wallace: Wallace caught a pass from Matt Moore that went for 7 yards.

Charles Clay: One catcht from Pat Devlin for 5 yards.

Lamar Miller: One carry for 6 yards.

Daniel Thomas: Two carries for a total of 8 yards.

Player of the Day: No one player had an eye opening performance on the field today, however the "player of the day" has to be handed out to somebody, and that somebody is Charles Clay. Clay caught 4 passes for 60 yards total and showed us once again how versatile of a player he truly is. 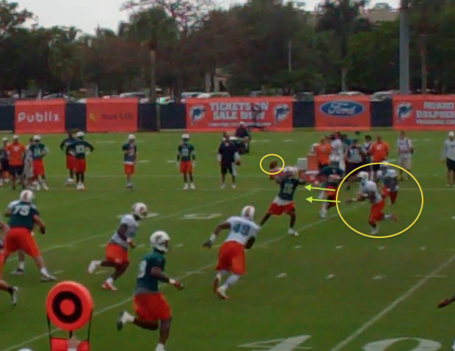 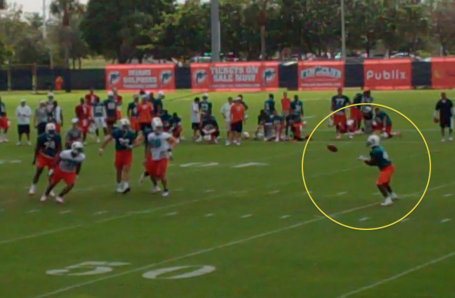 Lamar Miller completely open for the check down. 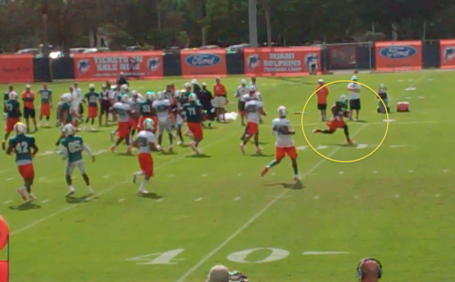 Daniel thomas busting through the defense for a big gain.