After a two week break, it's time to bring back The Phinsider Caption This contest. During the season, we took a look at the best pictures from each MIami Dolphins game, and tried to caption that. But, now, during the offseason, anything and everything are open to submission.

This week's contest brings us Indianapolis Colts owner Jim Irsay and quarterback Peyton Manning. What are the two really thinking as they talk to each other?

But, before we get to your submissions, we take a look back at the last Caption This contest. 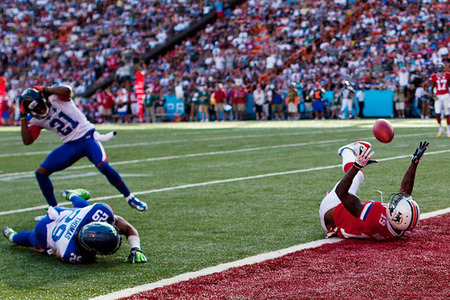 Our last winner was kabvorka, with:

The NFC players try to hide in terror, after catching a glimpse of The Monster!

Now, back to this week. If this week's picture strikes that creative nerve, leave your caption below in the comments. If you find a caption entry that you really like, click on "actions" then "Rec" at the end of the comment. That's it.