Continuing with our new offseason, ever-other-week schedule, the Caption This photo captioning contest returns this week, with a look at the Pro Bowl. And, when looking at the 2012 Pro Bowl, where else should you look but to Brandon Marshall. And, this week's picture give you two options for your captioning creativity.

Do you go with what Marshall was thinking as the ball bounces off his foot and up to his hands, while laying on the ground in the endzone?

Or, do you take a shot at the Chicago Bears' Corey Graham (NFC's #21) as he tries to figure out what just happened?

But, before you get on to this week's contest, we have to take a look back at the contest from two weeks ago. 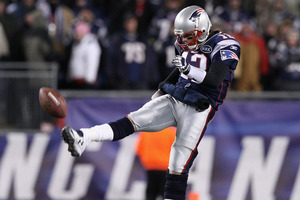 Taking a look at Tom Brady randomly punting the ball on third down against the Denver Broncos. The winner this week had the most recs every in one of these posts (I think - I'm too lazy to actually go back and check it out, but I think it's right). With 27 recs, Finhead83 clearly won, with a caption of:

Punters everywhere held their breath. They knew if Brady pulled a hammy, punts would be outlawed in the NFL.

Now, back to this week. If this week's picture strikes that creative nerve, leave your caption below in the comments. If you find a caption entry that you really like, click on "actions" then "Rec" at the end of the comment. That's it.