Dolphins at 49ers: Where to Watch, How to Watch, and What to Watch

After last week's loss to the New England Patriots, the Miami Dolphins head west to face the San Francisco 49ers later today. Here's all the television and radio information, plus more to get you ready for the game.

Share All sharing options for: Dolphins at 49ers: Where to Watch, How to Watch, and What to Watch

The Miami Dolphins dropped their first meeting with the New England Patriots last week. The contest this week is not any easier as Miami heads across the country to face the San Francisco 49ers. How can you watch the game? Of course, we have all the information you need.

Time: 4:05 pm Eastern
TV - CBS
Announcers - Greg Gumbel, Dan Dierdorf
Related: Looking for Miami Dolphins Tickets?
The Dolphins at 49ers game is the late game on CBS this week. CBS does not have the doubleheader this week, so wherever the Dolphins game is aired, there will be no early game for CBS. And this game is seen in markets all across the country. Obviously, all of northern California will see the game, through Oregon, across northern Nevada and all of Utah. It will also air in the Minneapolis market, including most of Minnesota and parts of North Dakota, as well as in Dallas, St. Louis, Chicago, Cincinnati, Buffalo, Philadelphia, Charlotte, and Atlanta. As for Florida, all of the state except the Jacksonville, Gainesville, and Tallahassee markets will get the game. 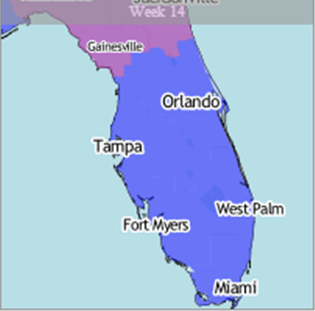 Obviously, CBS is going to be the place to watch this week in most places, but if you are lucky enough to live in the Texans market, or some other market, DirecTV's NFL Sunday Ticket package will air the game on channel 714.

1. Jonathan Martin vs. Aldon Smith - The Dolphins' second round draft pick makes his first start at left tackle this week, after playing right tackle all season. Replacing four time Pro Bowl tackle Jake Long is no easy task, and doing it for the first time against the league's sack leader, Smith, will make life rough for Martin today. He has to play up to his draft position if Ryan Tannehill is not going to get killed today.

2. Dolphins Containment - The Miami run defense, typically the strong point of the defense, will be tested today. They will face Frank Gore, who is having a great season, but it's not Gore that should be the concern. Miami will have to maintain containment of quarterback Colin Kaepernick and force him to become a pocket passer. Kaepernick actually has less NFL experience than Miami rookie Tannehill, so if the Dolphins can keep him uncomfortable, they could force him into some mistakes. That all starts with keeping him contained.