The Miami Dolphins lost to the New England Patriots on Sunday, dropping the game 23-16. During the game, the Dolphins returned to a play we broke down last week, adding a fourth variation to the three from the Seattle Seahawks game.

Two weeks ago, the Miami Dolphins utilized one basic play, with three different variations, to pick up big gains against the Seattle Seahawks. Lining up with two wide receivers, a tight end, a fullback, and a half back, the Dolphins started the play with an end around. Quarterback Ryan Tannehill could then either hand the ball to the half back, the wide receiver on the end around, or look to pass to the fullback leaking out of the backfield. In fact, the Dolphins did all three of those, with the end around gaining 9-yards, the half back run gaining 22-yards, and the pass to the fullback going for a 29-yard touchdown.

This past weekend, against the New England Patriots, the Dolphins returned to the play, but showed a fourth variation. Obviously, the team lined up in the same formation as the previous iterations. However, this time, Davone Bess, split wide left, would be the primary target on the play. 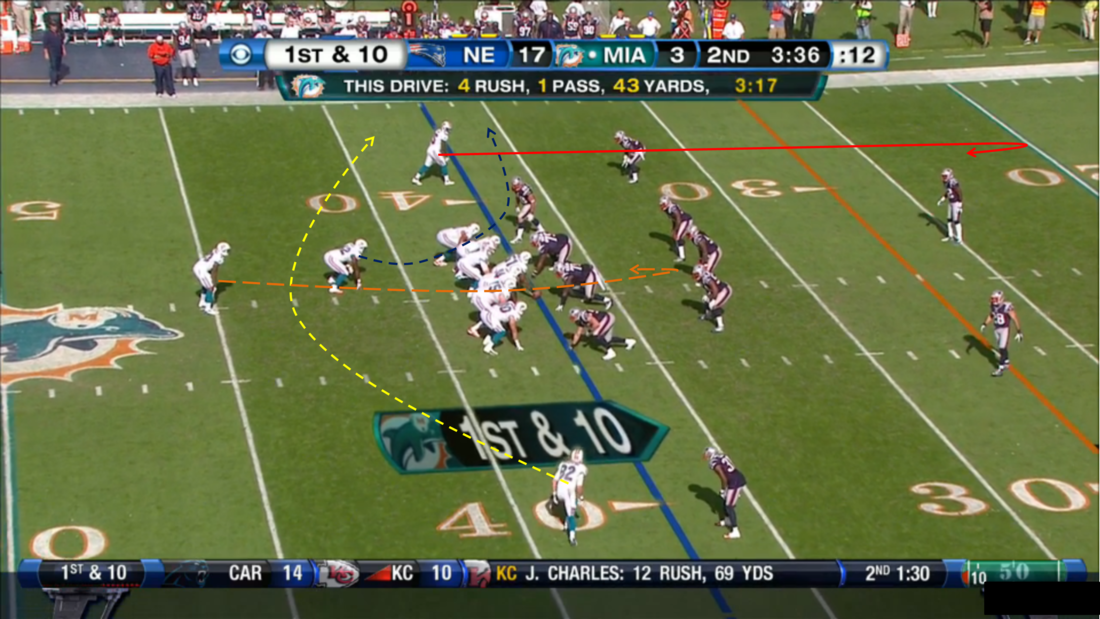 Switching from the broadcast angle to the All-22 Coaches' Film shows exactly what the Dolphins are trying to do with the play. Bess is going to run a comeback route 20 yards down field, while Charles Clay is running underneath and Daniel Thomas looking to sit down in the middle of the field. Brian Hartline is running the decoy end around. 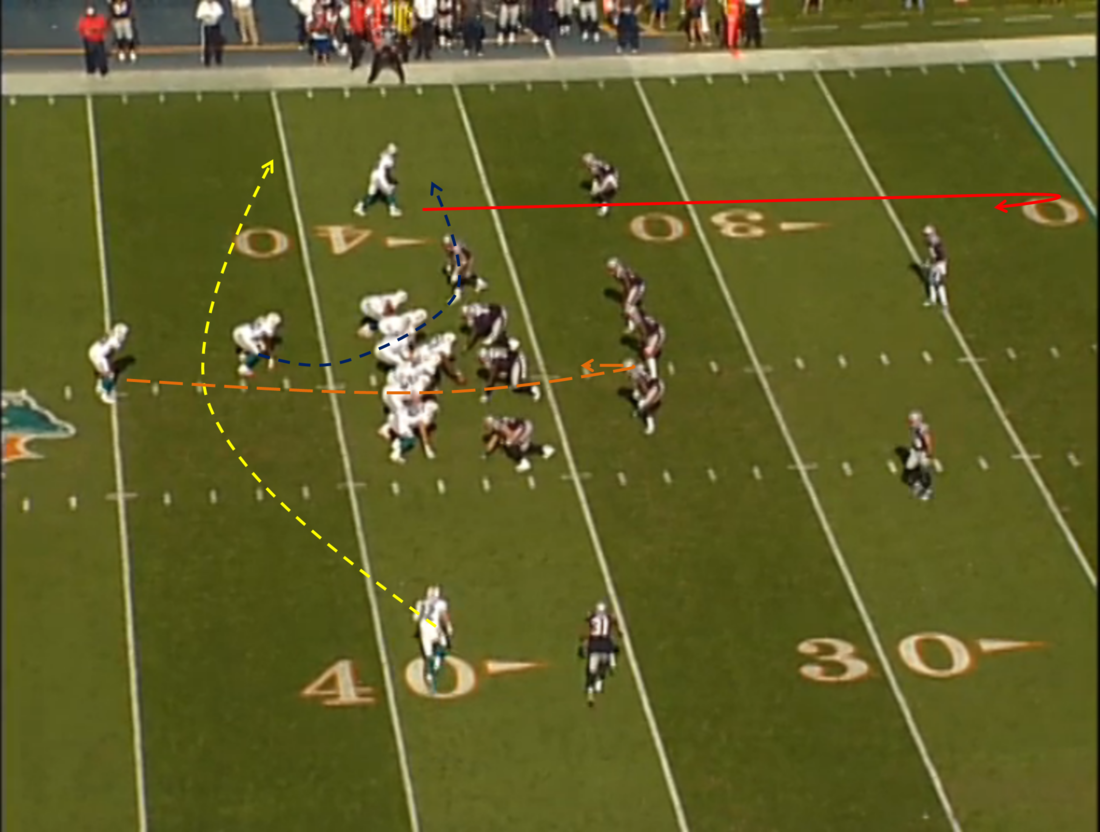 From the same shot, we can look at what the Patriots' defense is going to initially do on the play. The three down lineman, along with the defensive end standing over Jonathan Martin at left tackle will all rush Tannehill. The two outside linebackers are initially going to move to their left, clearly trying to stop a Thomas run. The two cornerbacks are in man coverage, with the one covering Hartline moving with him on the motion before breaking off to keep Thomas from bouncing outside. One safety is going to begin the play moving into the area vacated by the cornerback following Hartline, while the other safety will move to the deep middle of the field before breaking toward Bess. 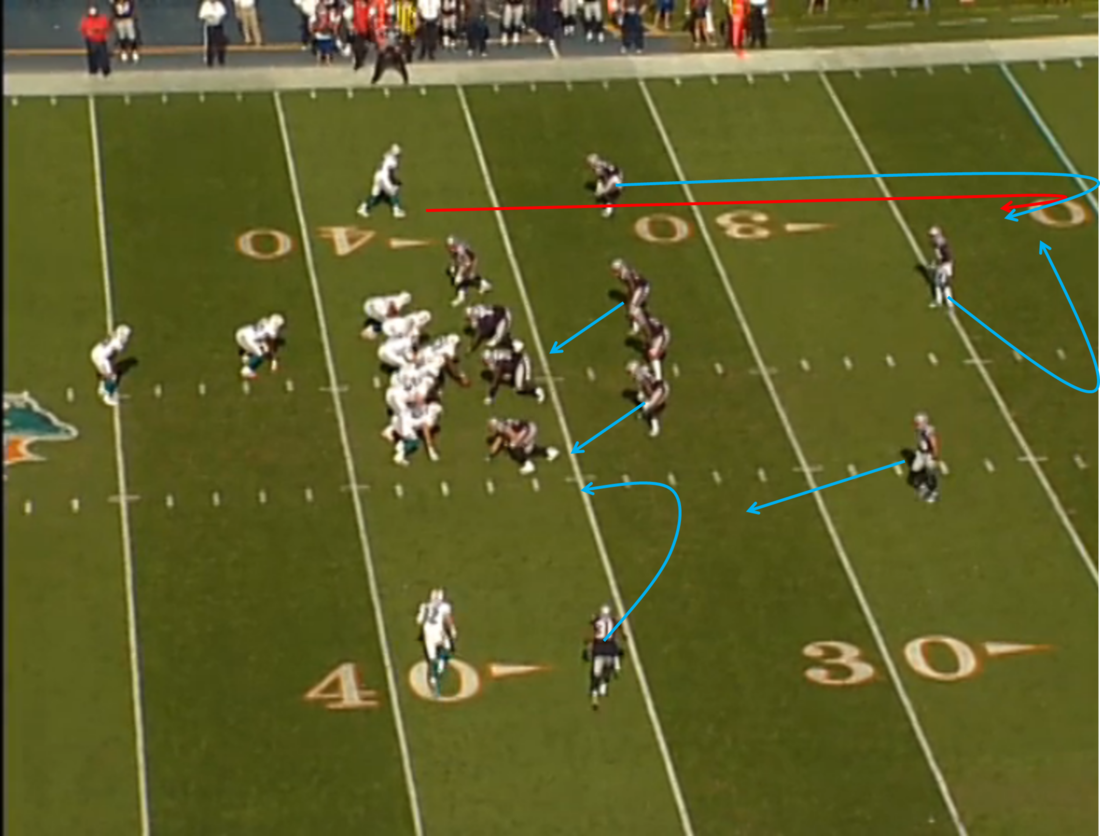 As the play develops, Thomas is the initial focus for the defense. 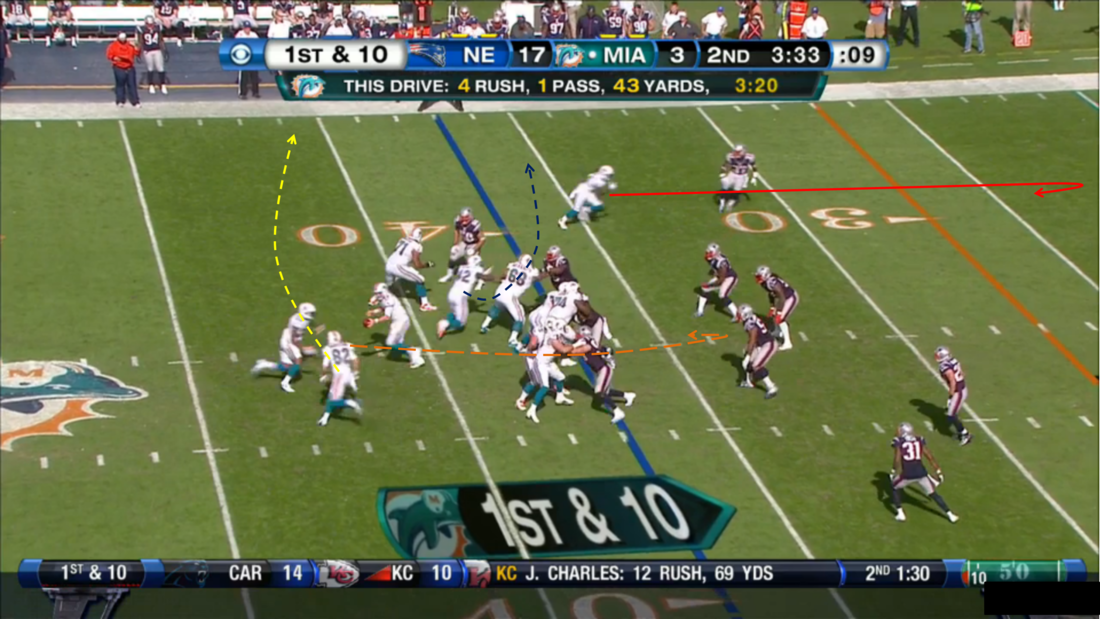 However, the Patriots quickly recover, with the linebackers moving back to their right. 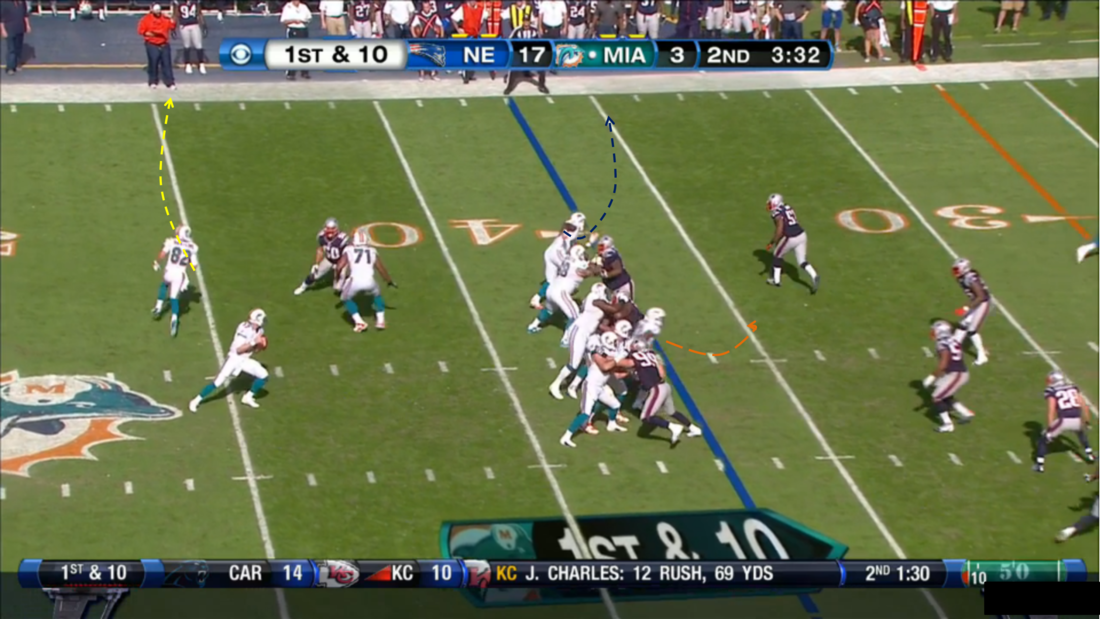 In the Coaches' Film angle, Tannehill is looking at his first option on the play, Bess. Meanwhile, the linebackers are moving into positions which will take away Clay in the flat and Thomas in the middle. 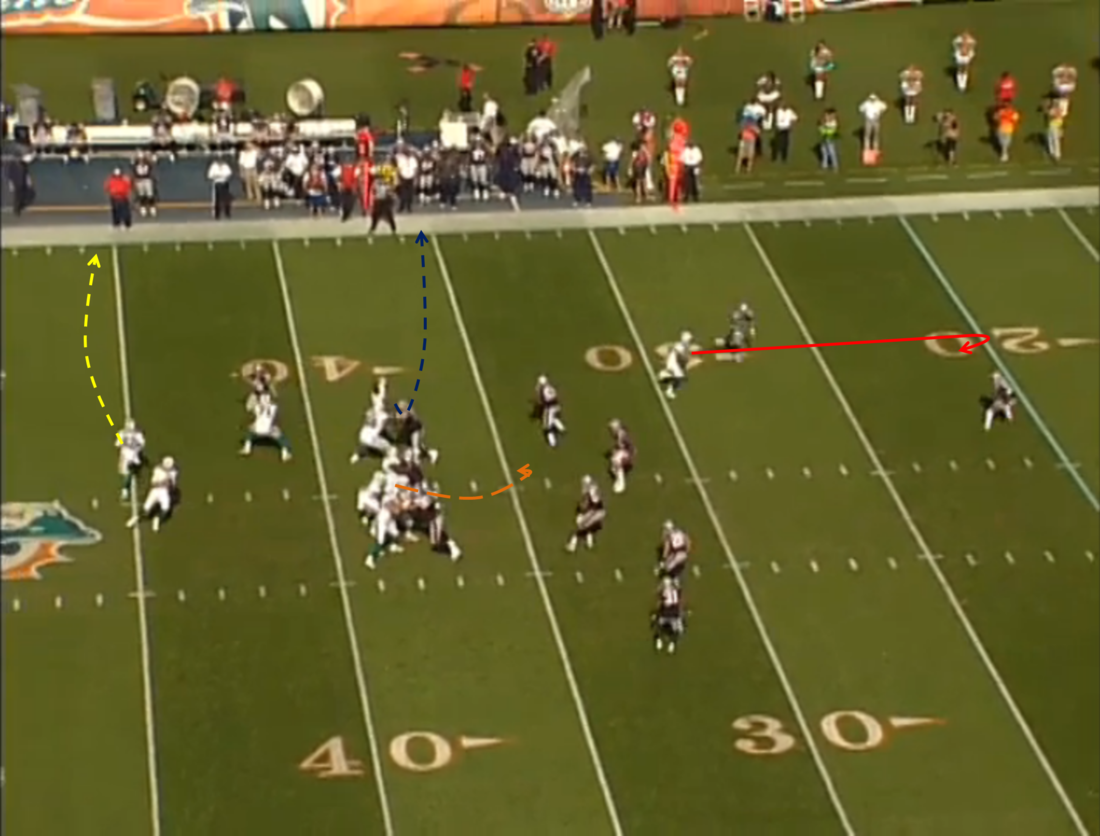 Just as he reaches the 20 yards down field mark, Bess stutters and comes back for the pass. He is turning to his right, toward the center of the field, shielding the cornerback from the ball. The move also turns the safety, who has inside help on the play, begins to move to cover a potential post route from Bess. Tannehill is beginning his delivery as Bess is beginning to turn around. 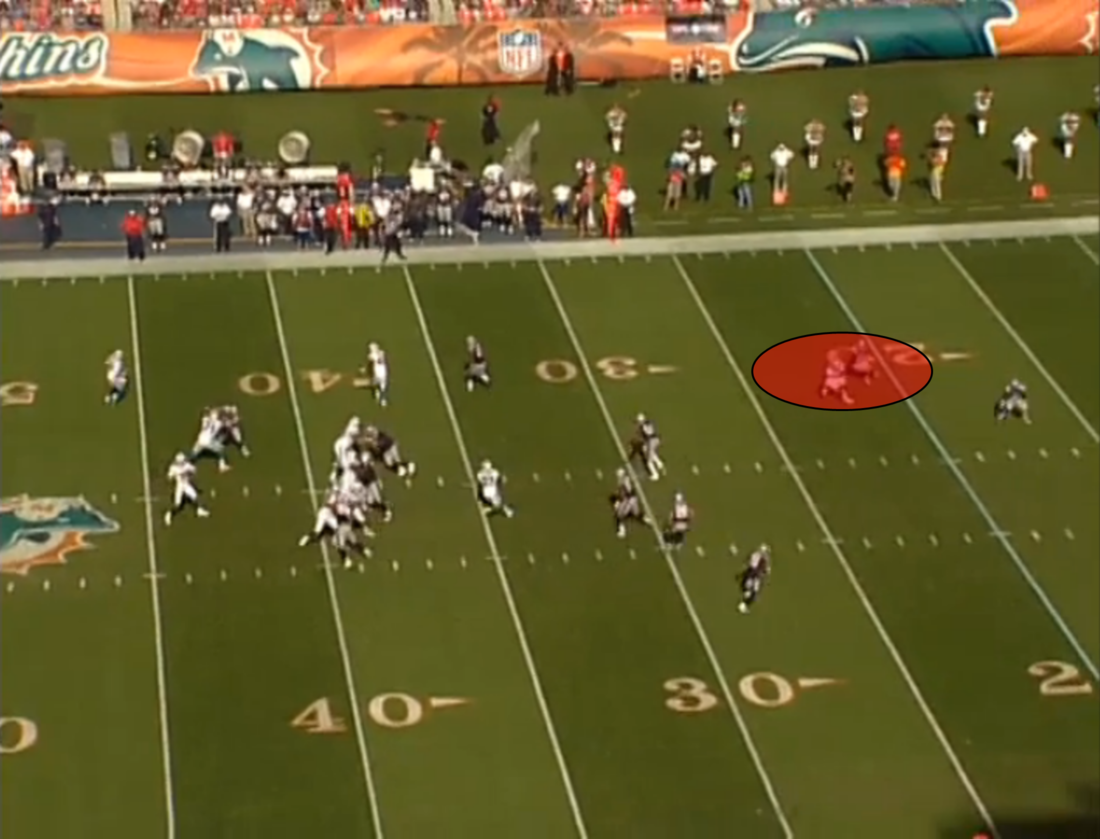 Tannehill places the ball high and to the sideline side of Bess. During the game, it appeared that Tannehill inaccurately placed the ball where Bess was unable to come down with the pass, but the more I've watched the tape, the more I think Tannehill placed the ball exactly where it had to go. The cornerback looped around Bess, and would have had a play on the ball if it were to the center of the field. Instead, Tannehill looked for Bess to be able to adjust to the ball. Bess would be able to get his hands on the ball. 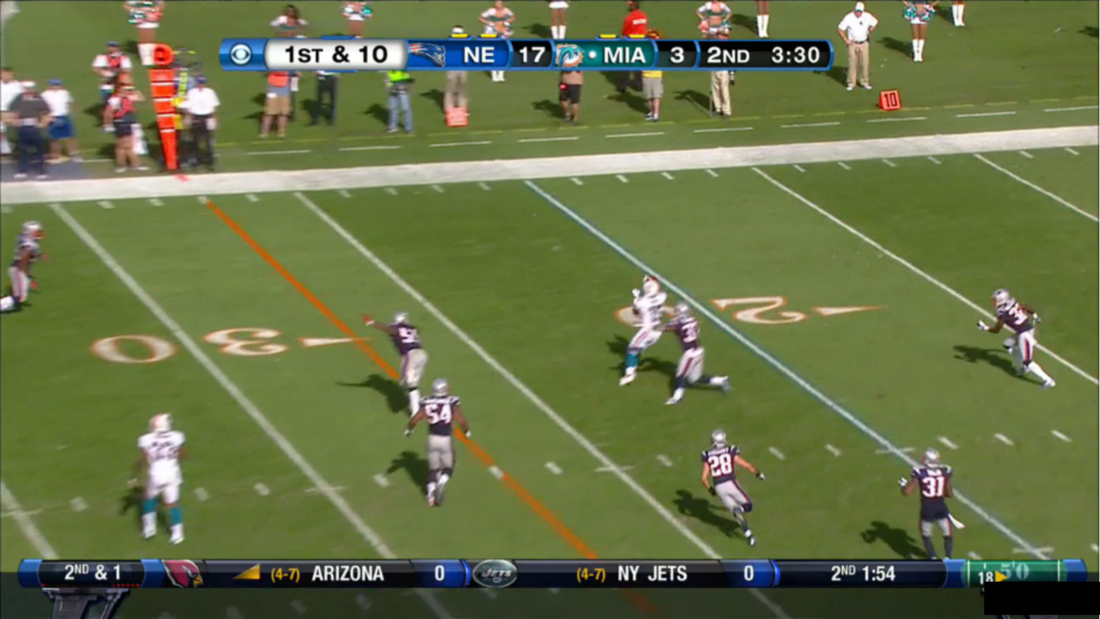 Unfortunately, what would have been another 20-yard gain for the end around play fell to the ground as Bess was unable to make the catch. 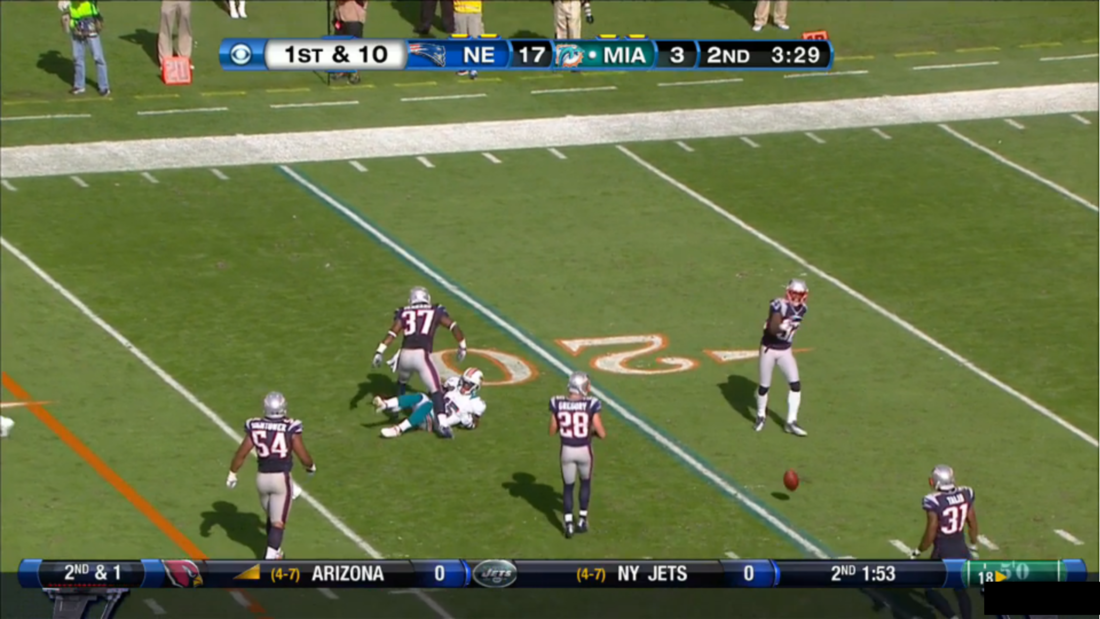