The Miami Dolphins took a 7-0 lead on the Buffalo Bills with 2:54 remaining in the first quarter. The score came on a 17-yard pass from quarterback Ryan Tannehill to running back Reggie Bush. Here's a closer look at the play.

The Miami Dolphins beat the Buffalo Bills this past weekend to split the season series with their AFC East rivals. Miami took a 7-0 lead late in the first quarter on a 17-yard pass from rookie quarterback Ryan Tannehill to running back Reggie Bush.

Miami lined up in a big set, with tight ends Jeron Mastrud and Anthony Fasano on the right side of the offensive line. Spread wide right was Brian Hartline, while to the left of the offense was Rishard Matthews, while Bush was set as the lone running back behind Tannehill. At the snap, Hartline would run a go route to the end zone, while Matthews will cross across the middle. Tannehill will fake a handoff to Bush, while will slide out into the flat while Tannehill bootlegs to the offense's right.

The offensive line has the most important part of the play. The entire line blocks left, which pulls the linebackers to their right, and clears the area just past the line of scrimmage for Bush. 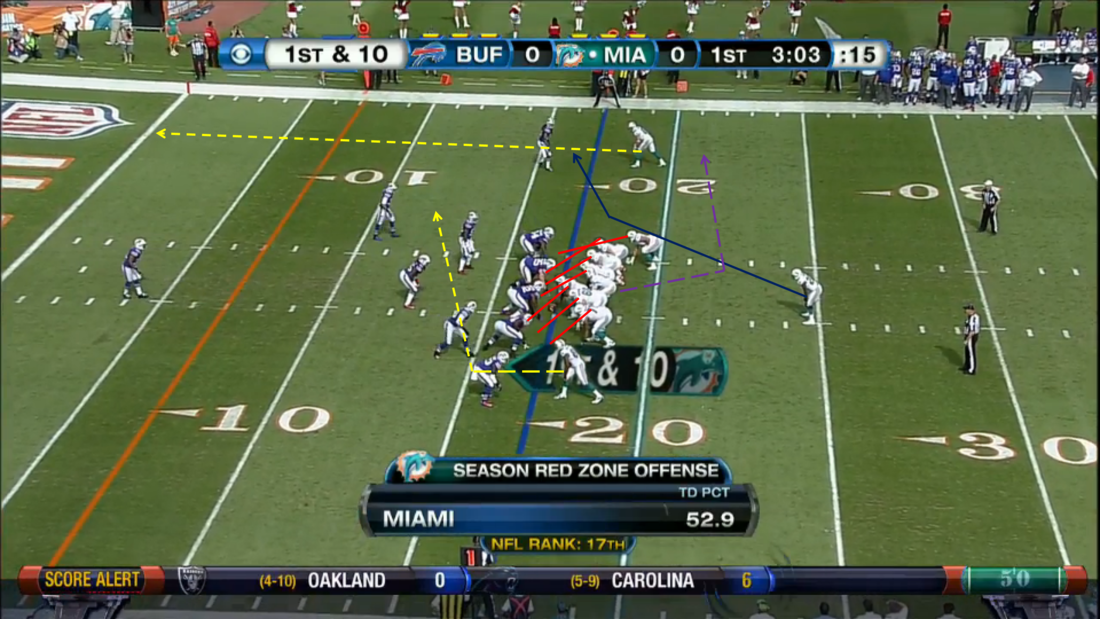 The offensive line has the most important part of the play. The entire line blocks left, which pulls the linebackers to their right, and clears the area just past the line of scrimmage for Bush. 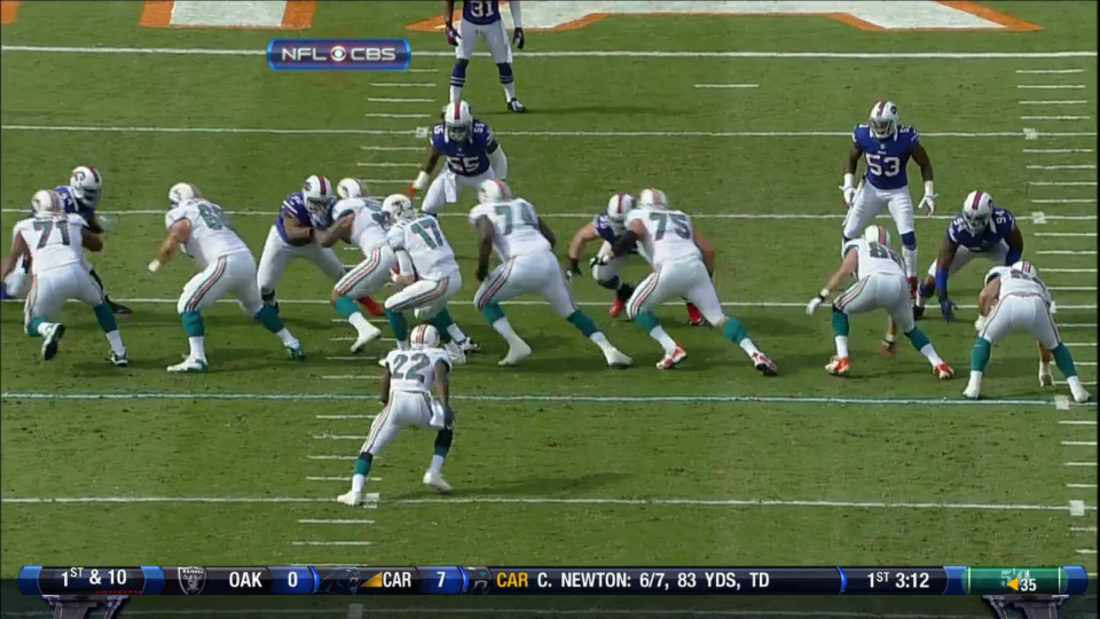 As Tannehill fakes the handoff, rookie linebacker Nigel Bradham (53) and safety George Wilson (37), who has moved down into the box to stop a Miami running play, both move to their right, away from the area where Bush will catch the pass. Linebacker Kelvin Sheppard (55) is the only defensive player who is moving to his left, trying to cover Bush. 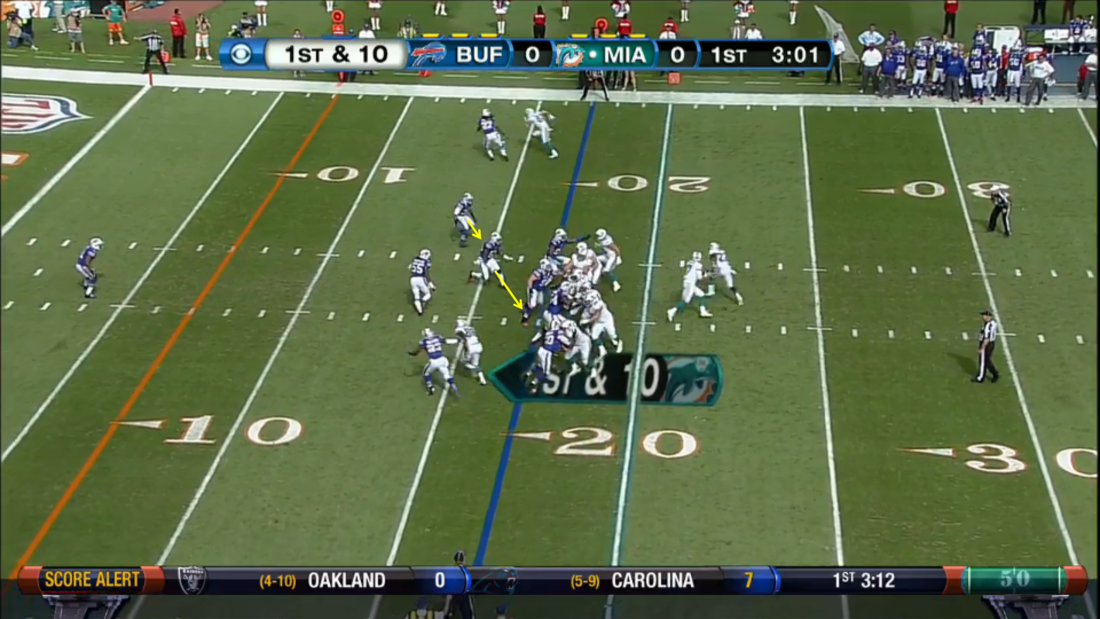 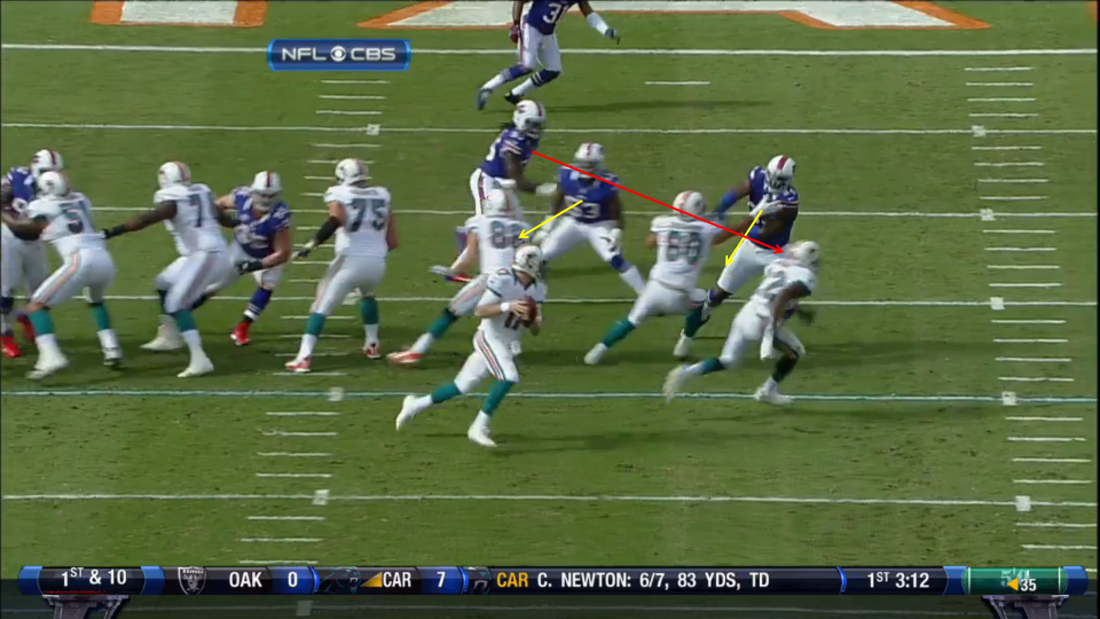 Tannehill rolls out to the offense's right, while Bush clears the offensive line and settles into the open area. Sheppard is still the only player moving to cover Bush, but he is already starting to move into an angle to cut off Bush after the catch. 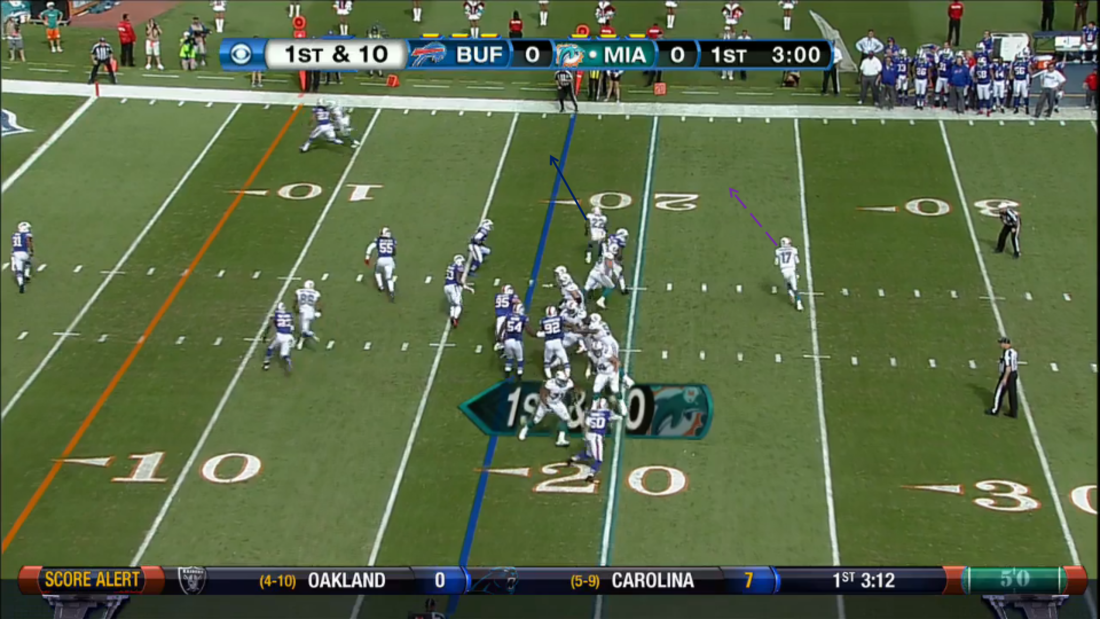 Everyone on the defense, except Sheppard, is focused on either Tannehill and the bootleg, or on the wide receiver they are covering. 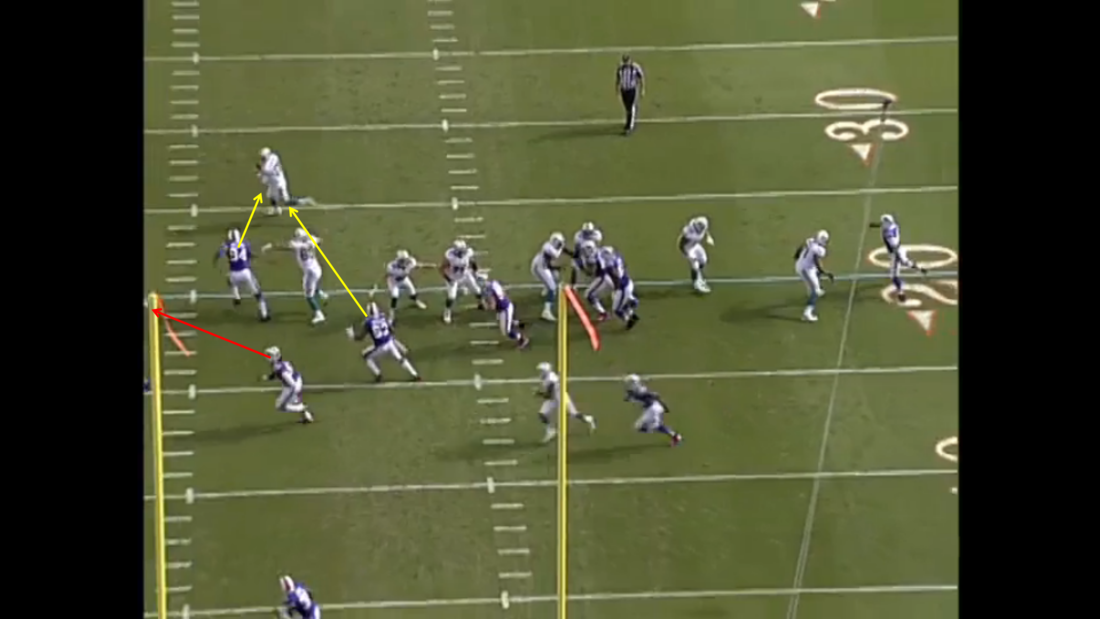 As Tannehill begins his delivery, Wilson is near Bush, but is completely ignoring the running back, more concerned about Tannehill's running ability than any pass to Bush. 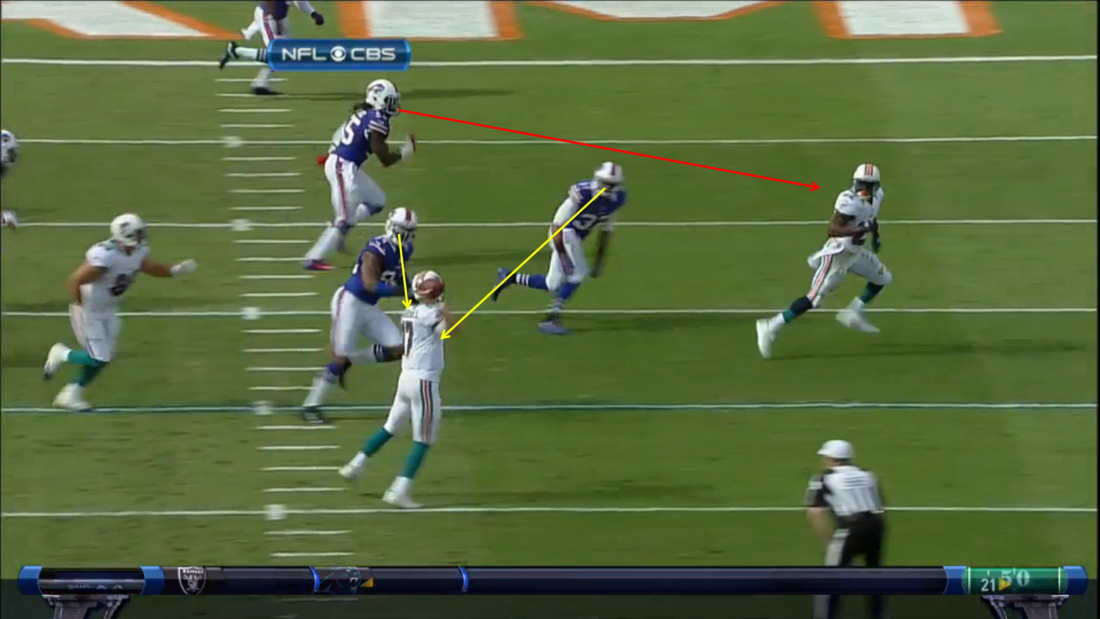 With the ball in the air, Wilson has realized his mistake, and begins moving to try to cutt off any gain Bush can make. Further up field, Sheppard is still working his pursuit angle, and will eventually close on Bush near the five yard line. 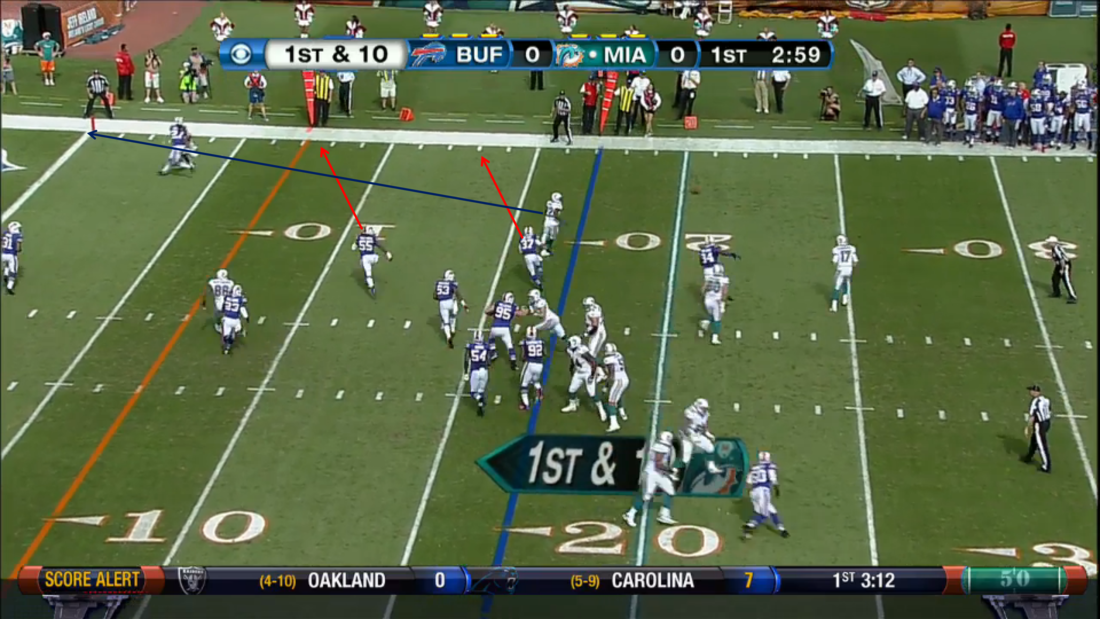 Bush catches the ball two yards beyond the line of scrimmage, and immediately turns up field. Brian Hartline is down field blocking rookie cornerback Stephon Gilmore, taking him out of any chance to make a play on Bush. 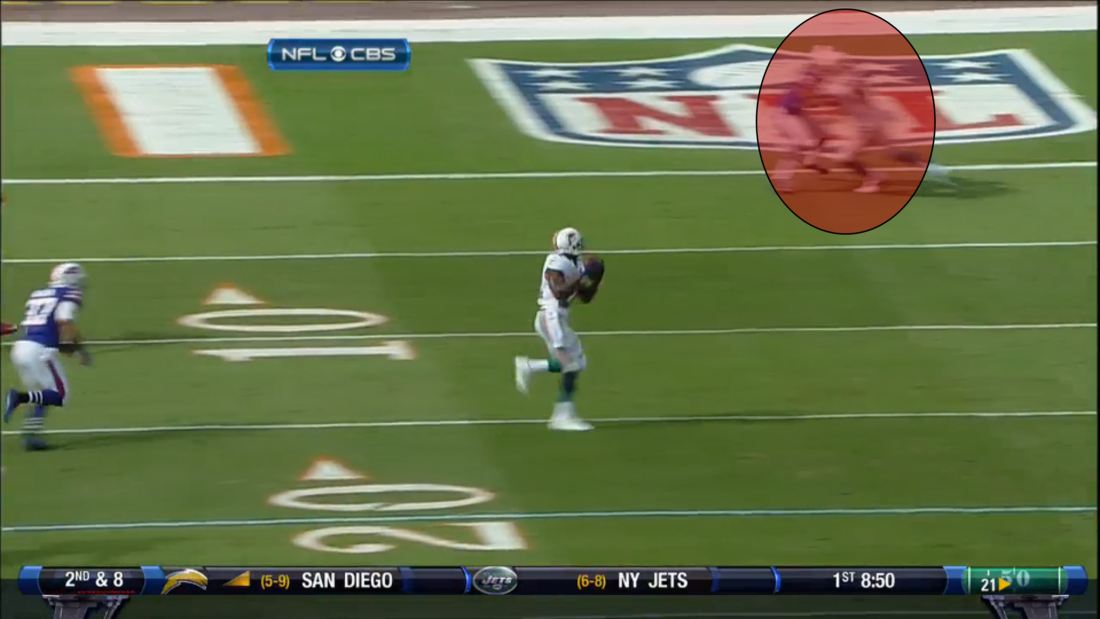 Bush takes the ball upfield, with Wilson and Sheppard still trying to get into position. Hartline, recognizing Sheppard's pursuit of Bush, is breaking off his block and coming back toward the play. 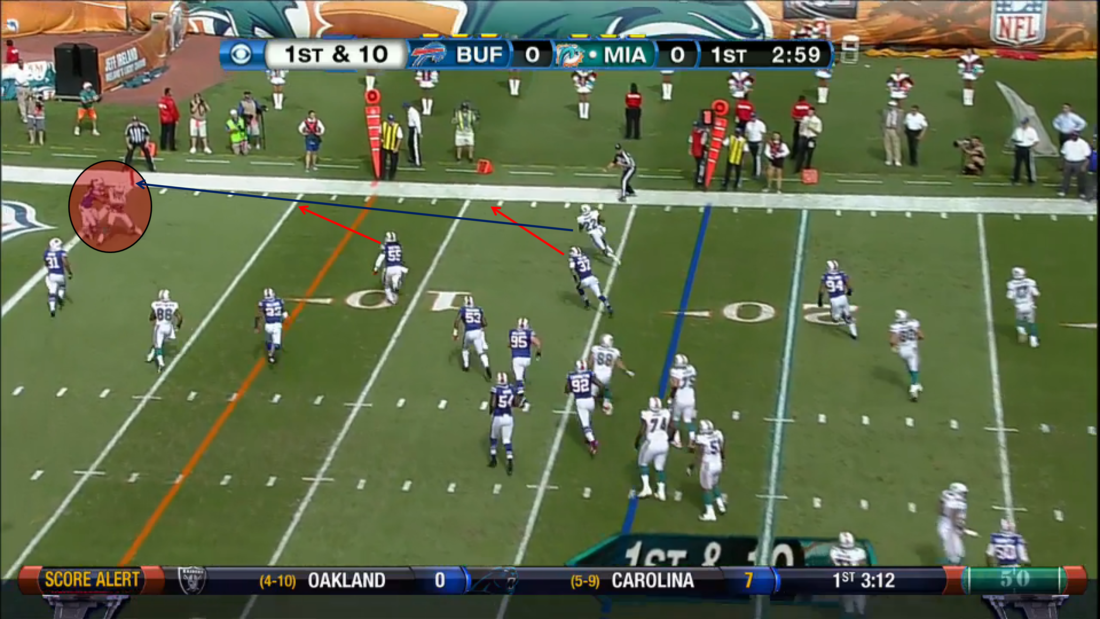 Sheppard catches up to Bush at about the four yard line, just as Bush dives for the end zone. The play would be reviewed, focusing on Bush's right foot as he dives. Somehow, the call that the play resulted in a touchdown would stand, despite it really looking like Bush stepped out at the four yard line. 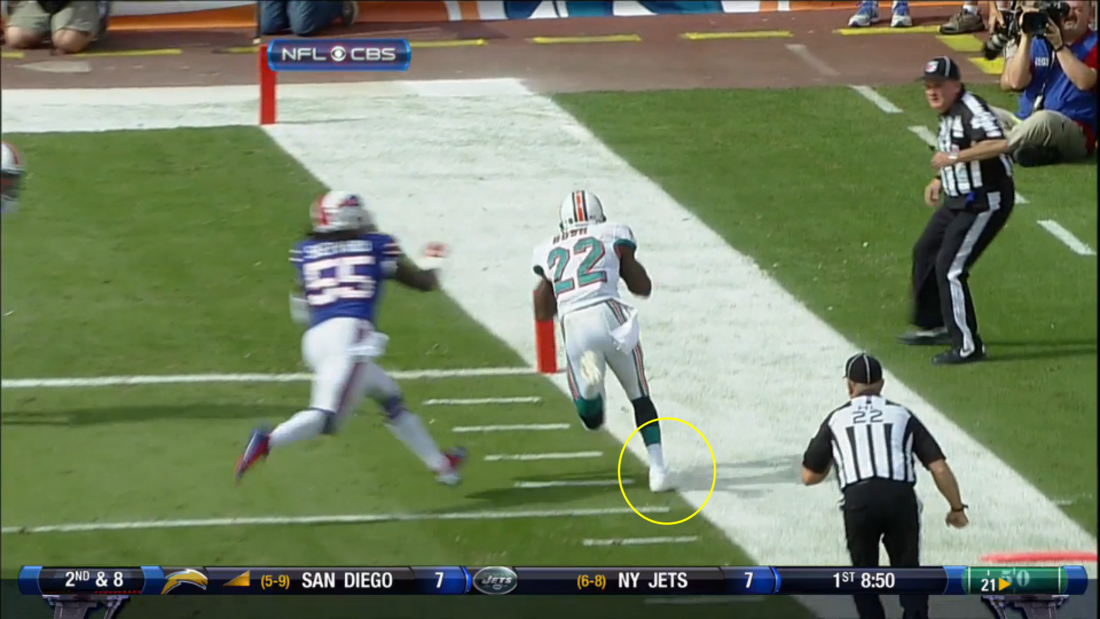 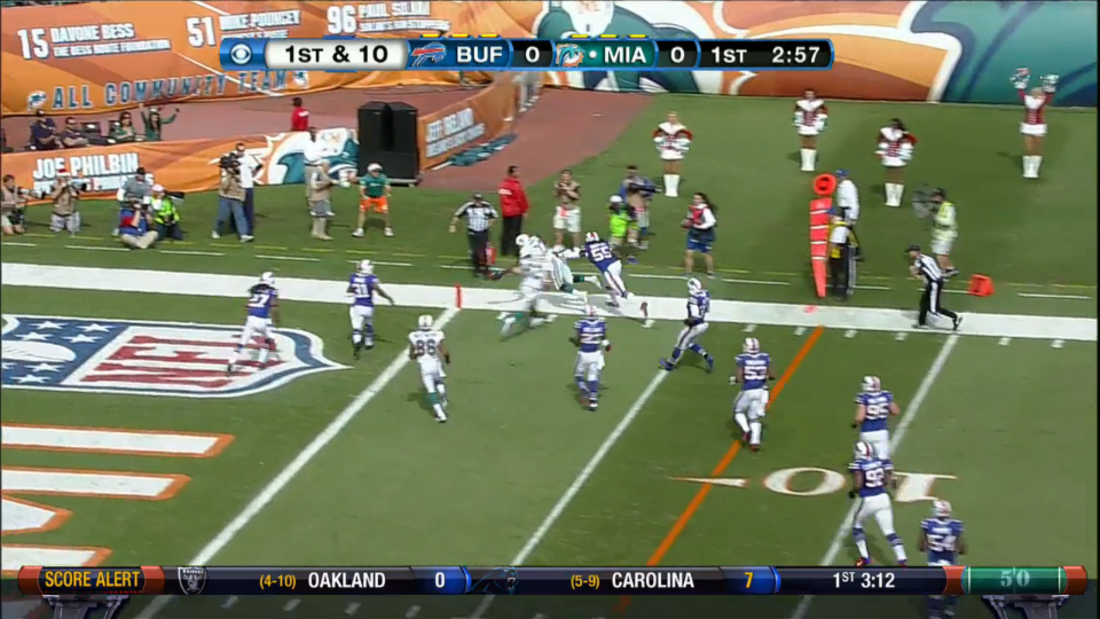 Finally, Bush stretches for the pylon, clipping the inside of it as he falls out of bounds. The call on the field is a touchdown, and the review confirmed the call. 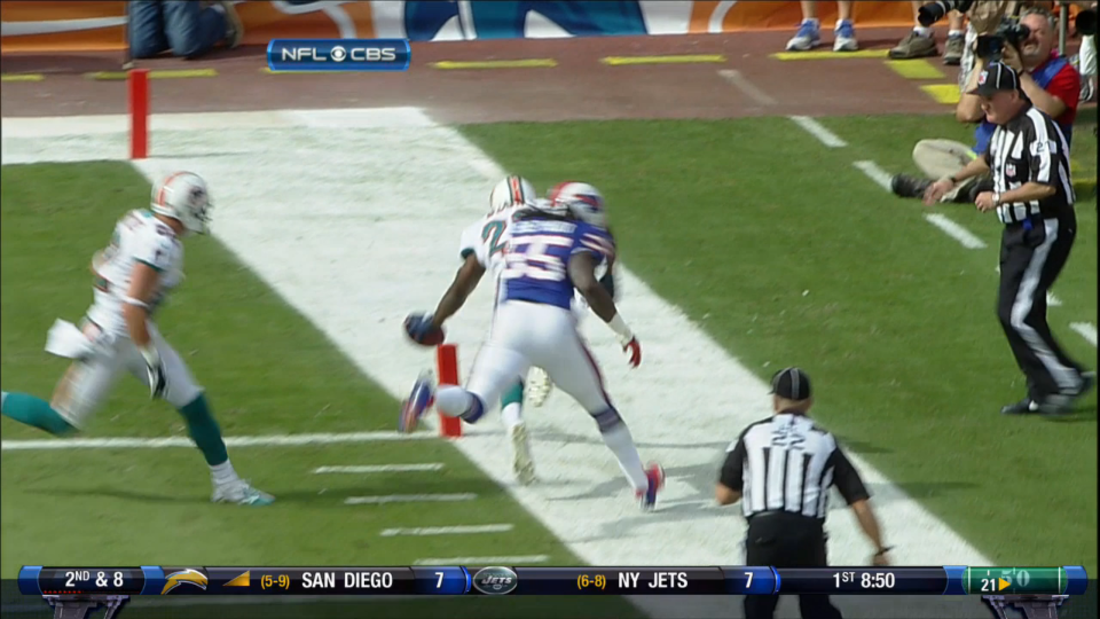 Bush would go on to score two more touchdowns on the day, scoring 18 of the team's points as Miami would defeat the Bills 24-10.