Bills at Dolphins: Where to Watch, How to Watch, and What to Watch

Looking to keep their slim playoff chances alive for one more week, the Miami Dolphins welcome the Buffalo Bills to Sun Life Stadium today. Here's all the television and radio information, plus more to get you ready for the game.

Share All sharing options for: Bills at Dolphins: Where to Watch, How to Watch, and What to Watch

The Miami Dolphins beat the Jacksonville Jaguars last week to keep their infinitely slim playoff chances alive. To do their part, the Dolphins will have to win against the Buffalo Bills today, a team that has already beaten Miami this season. How can you watch the AFC East divisional match up? Of course, we have all the information you need.

Time: 1:00 pm Eastern
TV - CBS
Announcers - Don Criqui, Randy Cross
Related: Looking for Miami Dolphins Tickets?
There are eleven early games this week, with the full map of the country looking like a psychedelic mess. For the Dolphins game, only the Miami/South Florida area and the western New York area will get the game today. 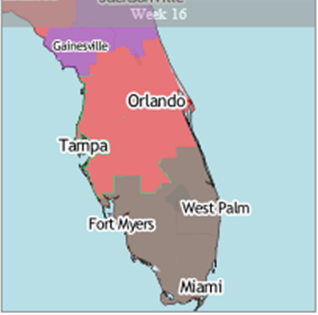 The NFL Sunday Ticket will be on DirecTV channel 713.

1. Reggie Bush vs. Bills - Last season, Bush ran wild on the Bills in their second contest, totalling 203 yards and a touchdown. In the first game this season, the Bills held Bush to just 20 yards, despite the Bills being the 30th ranked rush defense in the league. Bush has to get going early today to get the Dolphins offense established and to take some of the pressure off of rookie quarterback Ryan Tannehill.

2. Dolphins Playoffs - The Dolphins need a ton of help to make the playoffs. Besides having to win today, the Dolphins need the Pittsburgh Steelers to beat the Cincinnati Bengals. Next week, Miami has to have both the Bengals and Steelers lose, and the Jets need to lose one of their last two games. It's unlikely, but it's fun to be able to have a playoff scenario this late in the season.