Patriots at Dolphins: Where to Watch, How to Watch, and What to Watch

Coming off a big win against the Seattle Seahawks, the Miami Dolphins host the New England Patriots later today. Here's all the television and radio information, plus more to get you ready for the game.

Share All sharing options for: Patriots at Dolphins: Where to Watch, How to Watch, and What to Watch

The Miami Dolphins welcome the New England Patriots to South Florida today. Miami is coming off a big win over the Seattle Seahawks, keeping them in the playoff hunt and snapping a three game losing streak. Now, they face the AFC East division leaders for the first of two games this year. How can you watch the game? Of course, we have all the information you need.

Time: 1:00 pm Eastern
TV - CBS
Announcers - Greg Gumbel, Dan Dierdorf
Related: Looking for Miami Dolphins Tickets?
The Patriots at Dolphins game takes the marquee position on CBS' coverage of the NFL today. This is the main game that will be seen throughout the country, unless you live in another team's market (like all of Texas getting the Houston Texans game instead). Other than all of Texas, the Great Lakes region down through Missouri and over into North Dakota, parts of New York, and all of Tennesse, the game should be able to be seen on your CBS station. As for Florida, the Jacksonville market, ranging from Savannah, Georgia down through Orlando and Brevard County, as well as over to Gainesville, will be getting the Jaguars instead of the Dolphins. 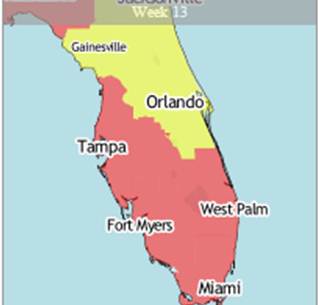 Obviously, CBS is going to be the place to watch this week in most places, but if you are lucky enough to live in the Texans market, or some other market, DirecTV's NFL Sunday Ticket package will air the game on channel 711.

1. Miami Pass Rush vs. Tom Brady - Patriots' quarterback Tom Brady is a master of getting rid of the ball just before the pressure gets to him. The Dolphins have to change that stat, and get to the future Hall of Famer. The key is going to be the pressure up the middle, with Paul Soliai and Randy Starks needing to shove the center of the Patriots line back into Brady's face. Cameron Wake, Jared Odrick, and Olivier Vernon have to get around the edge.

2. Reggie Bush - Bush seemed to bounce back last week, and had a game closer to what we expect from a 1,000 yard runner. Last season, against the Patriots, Bush average 116.5 yards per game. He has to continue that dominance to take the pressure off of rookie quarterback Ryan Tannehill, who Bill Belichick will be looking to force into bad situations. Watch for Bush to get the ball early and often this afternoon.

3. Fans - This is the first true sellout of Sun Life Stadium in....well....seemingly forever. Stephen Ross and his friends did not have to come in and buy the tickets this week to make sure the game ends up on TV. But, will those fans actually show up to the game? We shall see later today, but whatever fans are there, they need to be loud and give the team support. Being loud and making it difficult on Brady can aid in disrupting the Patriots' star. Plus, the Patriots have a chance to claim the AFC East Division Championship with a win this week - the fans need to help the Dolphins make sure that doesn't happen in Sun Life Stadium.

"He's a dynamic player. I think you have to know wherever he is when he's on the field. He could be in the backfield, they could hand him the ball, they could throw him the ball and he can get it in a lot of different ways. He has good strength for his size. I'm not saying he's a fullback, but he runs with good power for his size. He has great quickness. He's got great speed. He can run through tackles, he can run around people. It's similar to [C.J.] Spiller, that type of player: very hard to match up with in coverage. He's a tough guy to defend. You have to know where he is. There's no question, you can't line up out there and not know whether he's in the backfield or offset or out of the backfield. You have to have an awareness of him. He can take the ball on any ball and be a check-down or a handoff or a screen or anything and go 60, 70 yards. You make a mistake on him, he'll make you pay for it. " - New England Patriots Head Coach Bill Belichick on Reggie Bush, 11/28/12

"I like the consistency, obviously. The productivity; the results are excellent. (There have) been a lot of signs of good coaching. The turnover margin, I always think, is an excellent sign of the discipline of a football team. Again, I don't know this for certain, but I would guess (that) from 2000-2012, they're probably as good as it gets in the NFL. Because I know the five years that I was a coordinator in this league, we were second, but I know who was first; it was the New England Patriots in those five years, but I can't speak to the other four. Those guys, their players play well on film. They don't make a lot of mistakes, and that's a credit to their players and their staff. They win a bunch of games, and they don't beat themselves. We've got to earn everything against those guys. I think those are real positive traits. They seem to have players that represent the organization in the right way, that's another credit to coaching to." - Miami Dolphins Head Coach Joe Philbin on his impression of New England Head Coach Bill Belichick's coaching career, 11/30/12

"I think there's no doubt that they're a West Coast based system, that's clear. But, I'd say that really over the years, that offense has evolved to being unique to whoever is running it, whether it's Mike Holmgren or Andy Reid or Jon Gruden or [Mike] Shanahan or whoever it happens to be - Mike Sherman or [Mike] McCarthy. They all kind of have their own - they've adapted it, especially in the running game. Some of the elements of the passing game are the same but as it's gone to more of a one-back league, that's changed some of the passing game that was a lot of two-back passing in the old West Coast Offense. That's been modified. Certainly there's carryover from what Mike did at Texas A&M; certainly there's carryover from what Joe [Philbin] did at Green Bay. How exactly that breaks down, I don't know. You probably have to talk to them but I would say there are elements of both. There's a lot more ‘check with me' or audibling or changing the play or whatever you want to call it. That was really never a part of, like Bill Walsh's offense. They would maybe audible once a game, maybe, against a blitz look that wasn't their system. That's different now. Green Bay does it, these guys do it. Again, it's evolved. I think each one is a little bit different. " - New England Patriots Head Coach Bill Belichick on if a lot of Mike Sherman's offense from Green Bay is evident in Miami's play calling, 11/28/12