Jaguars at Dolphins: Where to Watch, How to Watch, and What to Watch

Looking to snap a two game losing streak, the Miami Dolphins welcome the Jacksonville Jaguars to Sun Life Stadium today. Here's all the television and radio information, plus more to get you ready for the game.

Share All sharing options for: Jaguars at Dolphins: Where to Watch, How to Watch, and What to Watch

After tough losses to the New England Patriots and the San Francisco 49ers, the Miami Dolphins look to end their two game losing streak this week against the Jacksonville Jaguars. How can you watch the all Florida match up? Of course, we have all the information you need.

Time: 1:00 pm Eastern
TV - CBS
Announcers - Marv Albert, Rich Gannon
Related: Looking for Miami Dolphins Tickets?
The all AFC-Florida matchup this week will be seen, well, in Florida. All of Eastern time zone Florida, minus the Tampa market, will get the game, with the Dothan, Alabama and Albany and Savannah, Georgia markets joining in. For the rest of the country, it's NFL Sunday Ticket this week. 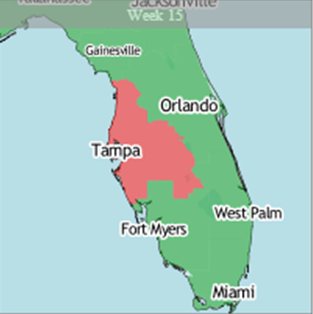 The NFL Sunday Ticket will be on DirecTV channel 711.

1. Chad Henne Returns to Miami - The last high visibility former Miami Dolphin to return to Sun Life Stadium with a new team ended up running around the field after the game celebrating the New York Jets win over the Dolphins. Will quarterback Chad Henne be looking for that same vindication and follow in Tony Sparano's footsteps? How "The Robot" handles the emotions of playing the team the drafted him back in 2008 could go a long way to deciding the game.

2. Dolphins Pass Rush - Cameron Wake outplayed the NFL's sacks leader Aldon Smith last week in the Dolphins' loss to the 49ers. Will Wake have an even bigger day against a Jacksonville team that has allowed 40 sacks on the year, fourth most in the league? Will Jared Odrick, Olivier Vernon, Derrick Shelby, Randy Starks, and Paul Soliai get in on the act as well? The Miami secondary knows what to expect from Henne, especially if he has time to rocket some passes into small windows. It's going to be up to the pass rush to make sure he doesn't have time to make those passes.