Tonight we see the 3 and 4 Dallas Cowboys travel to take on the 7 and 0 Atlanta Falcons. The Cowboys are of course led by head coach Opie...um I mean Jason Garrett. Garrett of course spends most of his day's contemplating how much he hates his life due to his quarterback Tony Oh-No aka Romo, the fact that he works for one of the Sith Lords aka Jerry Jones and the fact that Skip Bayless calls him his favorite Ginger. Jones in recent year's has also somehow managed to rebuild the Death Star but who would have thought that it would be built in Arlington Texas of all places? On the other side of the coin we have the Falcons who are led by one time NFL head coach of the year Mike Smith who narrowly beat out the Miami Dolphins Tony Sparano for the award that year. Think about that for a minute Dolphins fans, he was almost head coach of the year at one point. They are also led on the field by the QB that many Dolphins wanted him to select that same year, Matt Ryan. Ryan in many years would be in the drivers seat for MVP of the league given the year he is having if it were not for the amazing comeback of Peyton Manning in Denver. I for one find myself somehow rooting for the hated Cowboys only to see the Falcons finally loose a game, thus preserving the unmatched record of the 72 Dolphins. 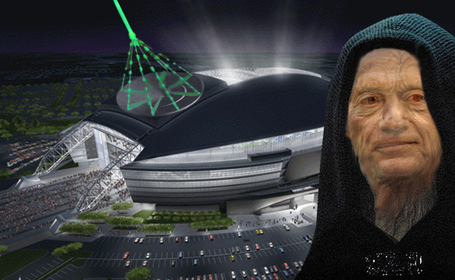 Jerry Jones and Jerry World aka the Death Star