Dolphins at Colts: Where to Watch, How to Watch, and What to Watch

Share All sharing options for: Dolphins at Colts: Where to Watch, How to Watch, and What to Watch

The Miami Dolphins head north today to face their one time AFC East division rivals, the Indianapolis Colts. The game will mark the first time two top ten pick rookie quarterbacks will face each other while both teams hold on to winning records. Of course, after the game, only one will still have an above .500 record. The Dolphins could come out of this contest tied atop the division with the New England Patriots, who are on their bye this week. How can you watch the game? Of course, we have all the information you need. 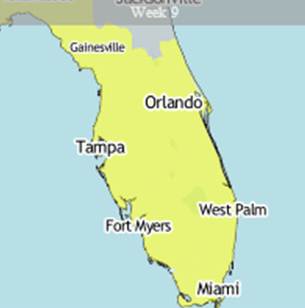 Despite the fact that this game is just one of two on the NFL schedule featuring two teams above .500, and that this game features Andrew Luck and Ryan Tannehill, the game will be seen in limited areas around the country. Almost all of Indiana will get the game, except in the Chicago market area, and in some of the bleed over from the Cincinnati market. The game will also be shown through central Illinois, through the Champaign, Peoria, and Springfield region, as well as through Louisville, Kentucky down to Bowling Green. In Florida, the entire state will get the game, except in the immediate Jacksonville market. The game will also reach fans in the Albany, Georgia market and around the Dothan and Mobile markets in Alabama.

Obviously, CBS is going to be the place to watch this week in the markets, but, outside of the green portions of Florida, or every where else in the country, DirectTV's NFL Sunday Ticket package will air the game on channel 711.

United Kingdom (Daylight Savings Time ended in the US this morning - make sure you adjust accordingly):

Germany (Daylight Savings Time ended in the US this morning - make sure you adjust accordingly):

Australia (Daylight Savings Time ended in the US this morning - make sure you adjust accordingly):

AFN (Daylight Savings Time ended in the US this morning - make sure you adjust accordingly):

1. Miami Cornerback Sean Smith vs. Indianapolis Wide Receiver Reggie Wayne - Wayne is currently the NFL leader in receiving yards, with 757. The Dolphins have really started using Smith as a top cornerback, allowing him to follow a team's top receiver, no matter where he lines up on the field. That means Smith should be covering Wayne just about every snap this week, and it should make for a great match up. Smith is looking to prove he is among the elite corners in the league, and shutting down Wayne could help that cause.

2. Colts Rushing Game vs. Dolphins Run Defense - The Colts' running game has awakened over the last two weeks, and the Colts have won both of those games. Over their past four games, the team is 3-1, winning the three games in which they ran for more than 100 yards. The loss, against the New York Jets in Week 6 saw Indy only gain 41 yards on the ground. Against the Cleveland Browns and Tennessee Titans in Weeks 7 and 8, the Colts averaged 160 yards on the ground per game. Meanwhile, the Dolphins are second in the league in rushing yards allowed, averaging just 82 yards per game - but they allowed 105 yards last week to the Jets and 162 yards to the St. Louis Rams back in Week 6. The Colts clearly are going to be looking to continue their success running the football, and the Dolphins have to get back into stuffing the run.