The 4-3 Miami Dolphins battle the 4-3 Indianapolis Colts in a PRIMETIME match-up with SERIOUS playoff implications.

RT @jameswalkerespn: Entering November last year, #Dolphins were 0-7 and #Colts were 0-8. This year both are 4-3 and in playoff contention.

Believe it or not, the Miami Dolphins look to win back-to-back road games for the first time since 2010, when they opened the season by beating Buffalo and Minnesota on the road.

This game will probably be more important than last week's, even if a win won't feel as sweet; Miami looks to keep the momentum going; a win Sunday would propel the 5-3 Dolphins right into the middle of the AFC playoff picture.

On paper Miami matches up pretty well... Our defense looks to stifle them and our offense should be able to move the ball on their defense pretty well. This all is in part to Miami's stellar line play on both sides of the ball. This is most of the reason why we are 4-3 and in the playoff race to begin with.

However the Colts have some playmakers of their own, starting at the QB position, and the atmosphere in Lucas Oil Stadium will give the Colts an advantage at times.

Miami is favored, but don't look for this to be an easy challenge... they must play smart fundamental football and it is important that they are able to do these three keys to victory...

Miami has looked not so Miami lately on offense, meaning that the ground attack that is the staple of our team has been mostly bottled up over the last month. Luckily for us, the defense and special teams have played LIGHTS OUT, and that is the reason Miami made the month of October their bitch. However, as the Dolphins play better opponents they had better figure out their rushing attack sooner than later and get back to destroying teams on the ground.

Reggie Bush has played well, but has not regained his full form since his knee injury in Week 3 versus the Jets. In his defense, he has played against the Rams, Bengals and Cardinals in this time, who were pretty stout against the running game. While Miami is ranked second in rushing defense (to Chicago), Indianapolis is all the way down at 25. Developing a rushing attack will help Miami to control the clock and keep Andrew Luck off the field.

Reggie Bush should get help from Daniel Thomas, who played well last week. Lamar Miller might even join in the fun as well. Miami's line has struggled lately in run protection, so they need to get back on track this week, and they should fare well against a below-average Indy defense. Keeping the ball rolling on the ground will open up the passing games including screens and dump-offs out of the backfield (let's see if we hear Clay or Lane's name this week) and lessens the pressure on our QB to have to make plays.

Whoever starts at QB, especially if it's Ryan Tannehill will have the most success the less they have to make plays. I like our chances if our QB has less than 30 passing attempts this week, meaning more than likely we're moving the ball well on the ground.

A big day from Reggie & Co. is exactly what this team needs this week. 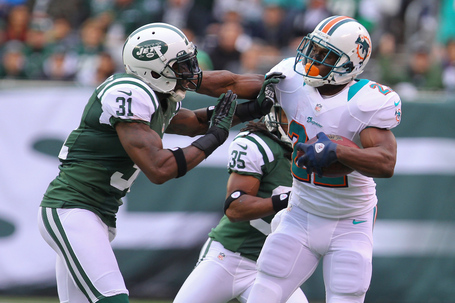 Bad News... This is no average rookie.

Luck will be at home and looking to show Ryan Tannehill why HE was selected at number 1 overall. Pair that with the fact that Vick Ballard and Donald Brown will be about as effective against Miami's defense as fighting a wildfire with a squirt gun. Luck will get plenty of opportunities to find his receivers and attempt to make it rain on Miami. Will Miami continue to answer and show the world that their defense is no joke?

The best way to do that is to continue to "outcoach" opposing offenses by providing pressure in unique blitz packages. For example, last week, half of Miami's four sacks came from defensive backs (Carroll & Wilson) and plenty more provided pressure. Our D-Line should completely decimate the Colts line and crush Luck all day. THIS will be Miami's best chance of winning. Luck is mobile and has fared well against the blitz, but collapsing his pocket will make it easier to force fourth downs AND hopefully a few turnovers. 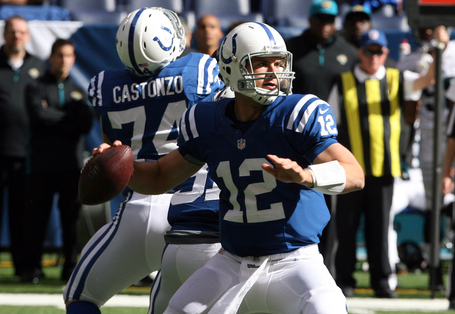 Miami's "bend, but not break" mentality has been extremely beneficial for the defense as of late. Miami has allowed a few big plays the last few weeks, but none that changed the game on the score since Roberts long TD in Arizona or Goodson's long screen TD against Oakland. Miami needs to eliminate that big play which can dictate a dramatic momentum swing.

Miami's 3rd down offense and defense is along the best in the league, meaning on defense, if Miami can force third down's they usually fare well in forcing punts and or FG's. Andrew Luck will be looking to NFL leading receiver Reggie Wayne, early and often, meaning Sean Smith will yet again have a busy day with an elite receiver. Look for Sean to try and play aggressive, and get safety help to make sure Wayne can't get behind him for a long score. My concern would be to look out for speedster rookie T.Y. Hilton. Hilton has wheels and might find himself matched up with CB Nolan Carroll. As great as Carroll has looked lately, he definitely has struggled with elite speed in the past.

As of late, it has been the Dolphins making the big momentum changing plays (especially on special teams) instead of vice versa. This will be a huge task to make sure that Miami does not give up a momentum-changing big play to fire up the Indianapolis crowd; it could make the difference in the game. Establishing a solid run game on offense will allow Miami to open up playaction and hopefully strike first with a big play. I hope to see our defense continue to bring the heat, however they need to make sure their coverage is solid, because Andrew Luck is definitely capable of beating a team with a big play using his pinpoint accuracy. 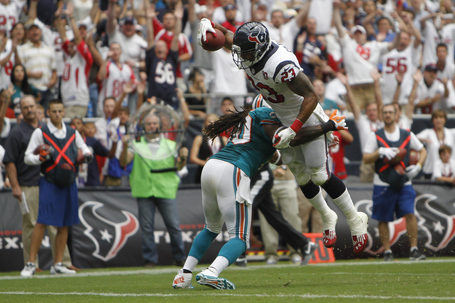 In conclusion, this very well could be the game of the week and I expect it to come down to a score, or two at most. Miami fares well against Indianapolis on paper, but will need to continue to play smart fundamental football, as they have been. Final prediction: Miami 27, Indy 20.