Dolphins Give Up 2nd Quarter Touchdown to Seahawks

On Sunday, the Miami Dolphins beat the Seattle Seahawks 24-21. With just 40 second remaining in the first half, the Seahawks had driven down the field and were looking to tie the score at 7. Seattle would find the endzone on a three yard touchdown pass to tight end Anthony McCoy.

Share All sharing options for: Dolphins Give Up 2nd Quarter Touchdown to Seahawks

The Miami Dolphins were leading the Seattle Seahawks 7-0 late in the first half when Russell Wilson and the Seattle offense were finally able to break through the Dolphins defense, driving 77 yards in eight plays, down to MIami's three yard line. On second in goal, the Seahawks lined up with two wide receivers, a running back, and two tight ends. 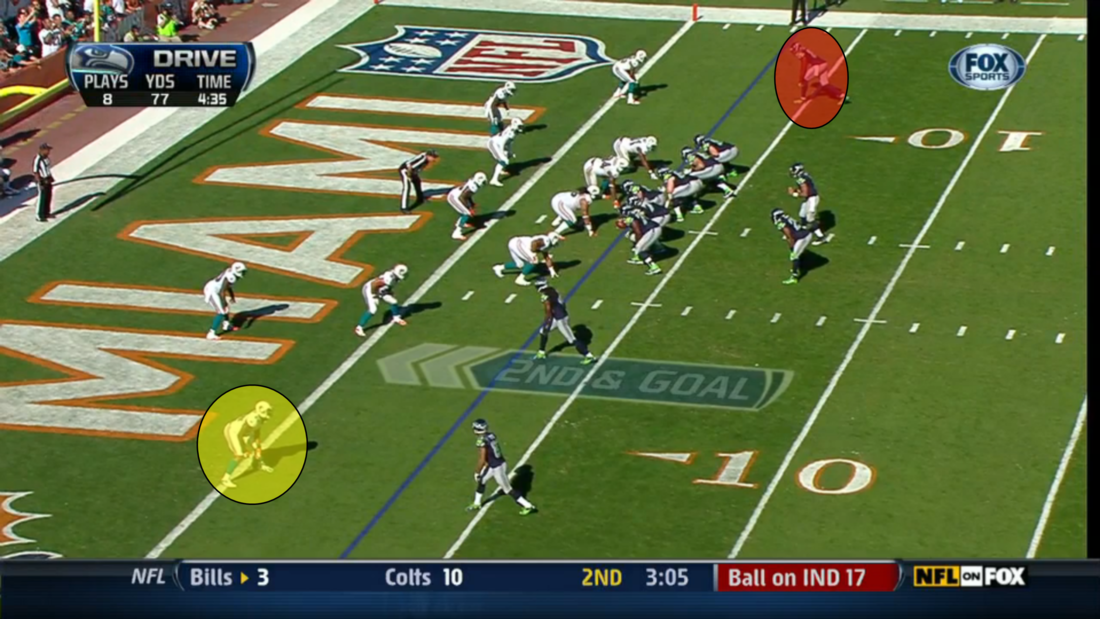 As the play begins, McCoy comes in on a crossing route, while Tate does the same thing from the other side. 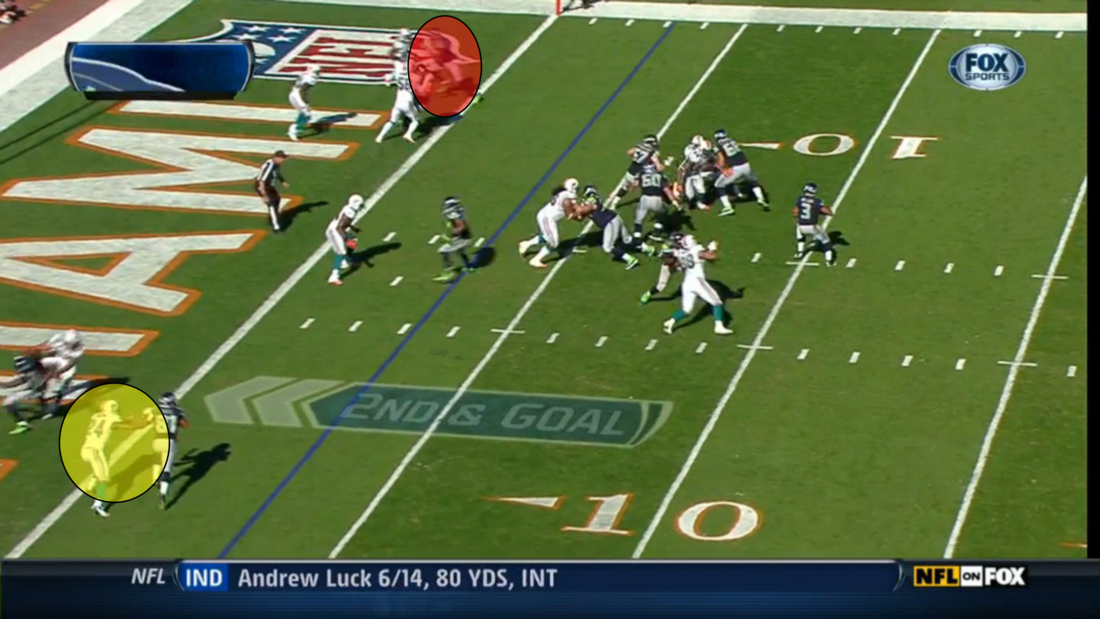 Suddenly, the Miami pass rush gets to Russell Wilson, with Jared Odrick leading the way. 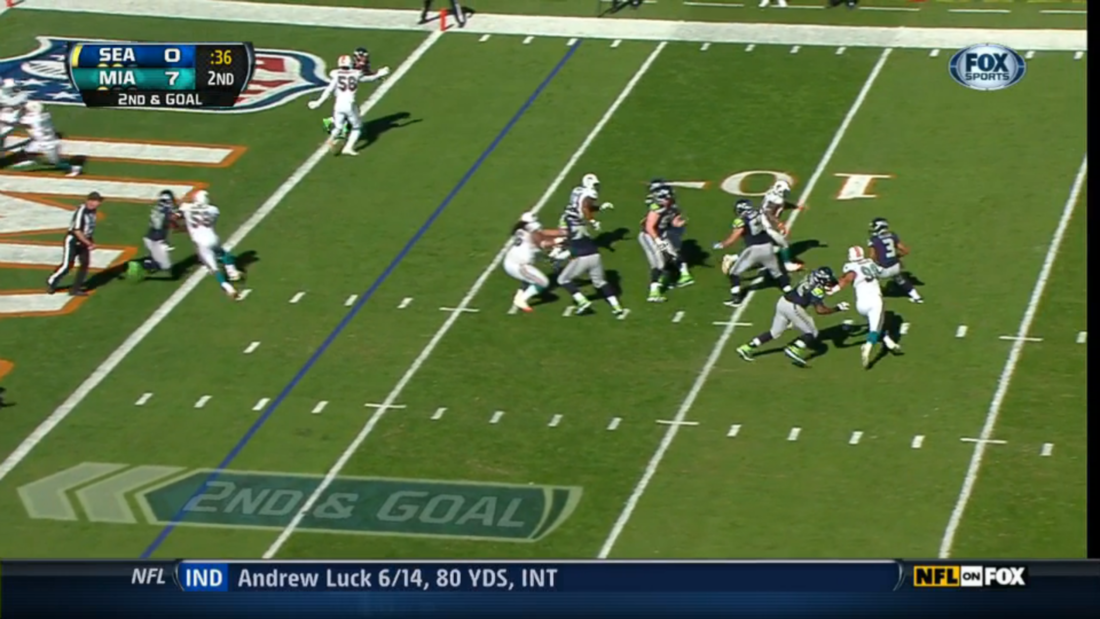 Switching to the All-22 film, Smith is locked up on Tate, while McCoy is now doubled by Stanford and, who I think is Chris Clemons, though I'm not 100% on that. 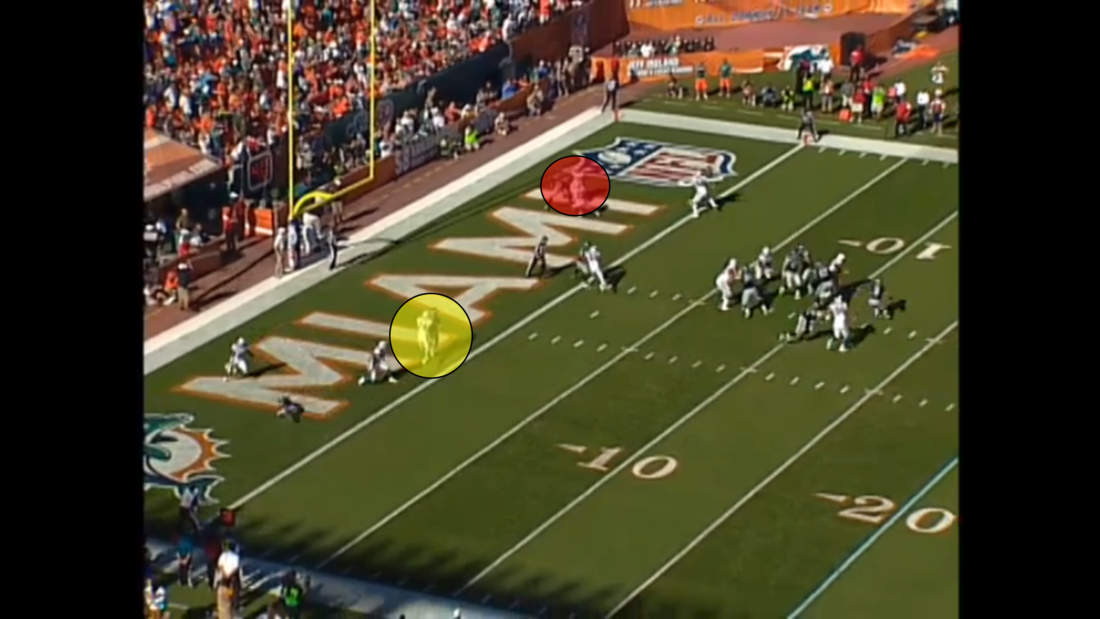 The Dolphins collapse on Wilson, who somehow steps under everyone and comes out ready to throw. 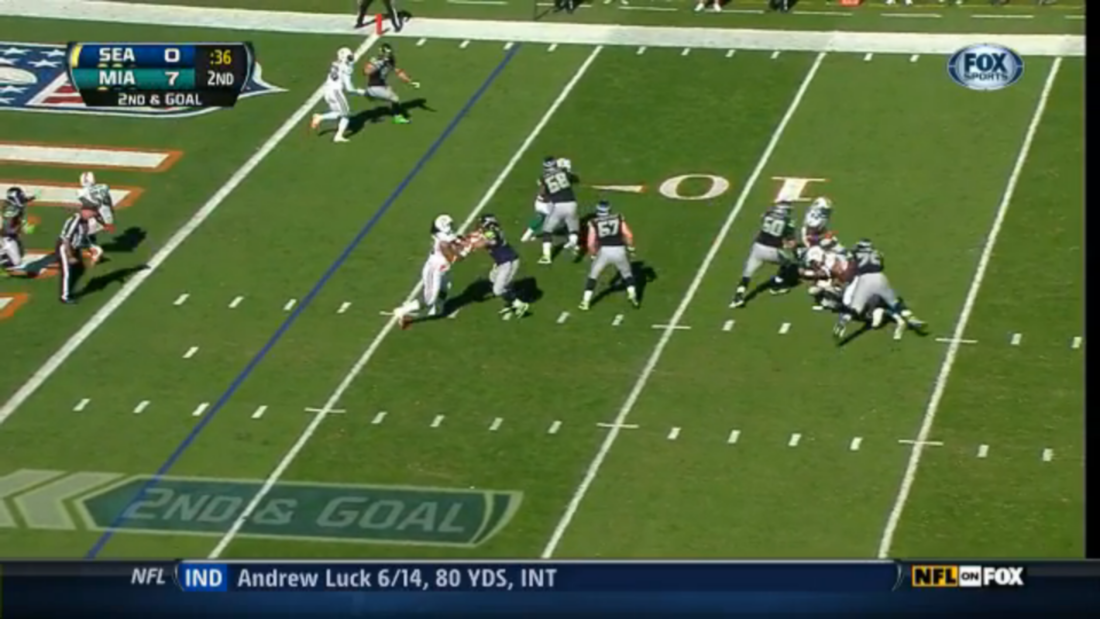 At the point where it looks like Wilson is going to be sacked, everyone on the field seems to stop, except for Smith who is still locking down Tate right in the middle of the end zone. McCoy, at the back of the end zone slows, with both defenders seeming to give up on the coverage at this point. 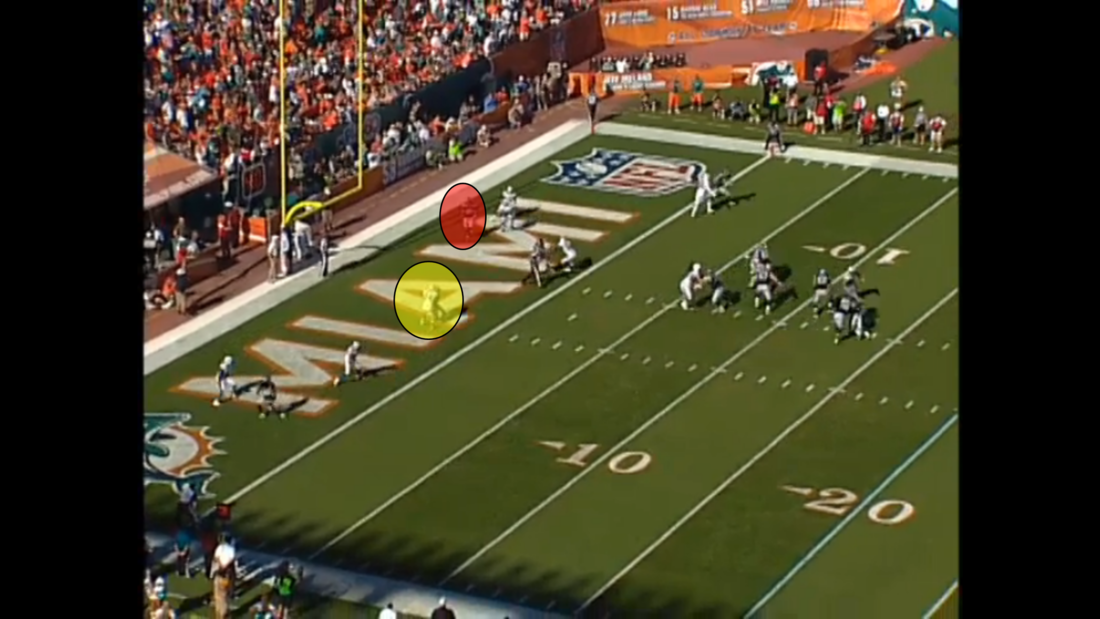 Wilson comes out of the pile looking at the end zone. McCoy has continued to move across the back of the end zone, with no one covering him any more. The safety has stopped in the middle of the end zone, and Smith is now the only one who recognizes that the team just allowed McCoy the space to score. 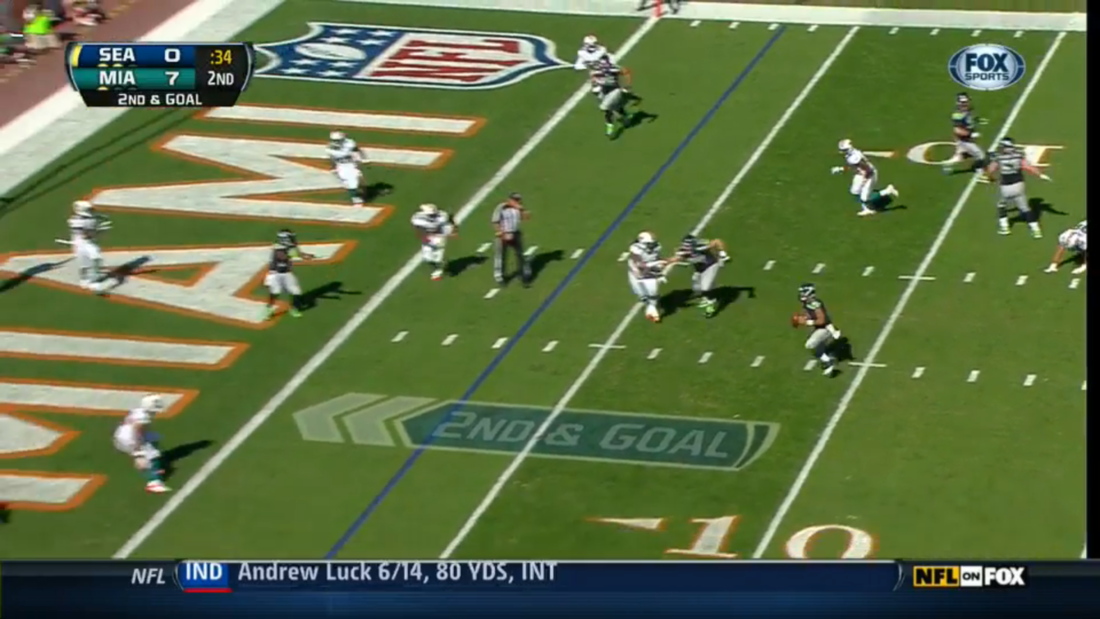 Breaking off his own responsibility, Smith tries to chase down McCoy, but it's too late. Wilson has seen the wide open tight end, and lofted a ball for the back corner of the end zone. At this point, before the ball has even crossed the goal line on its way to McCoy, Tate is signaling the touchdown. 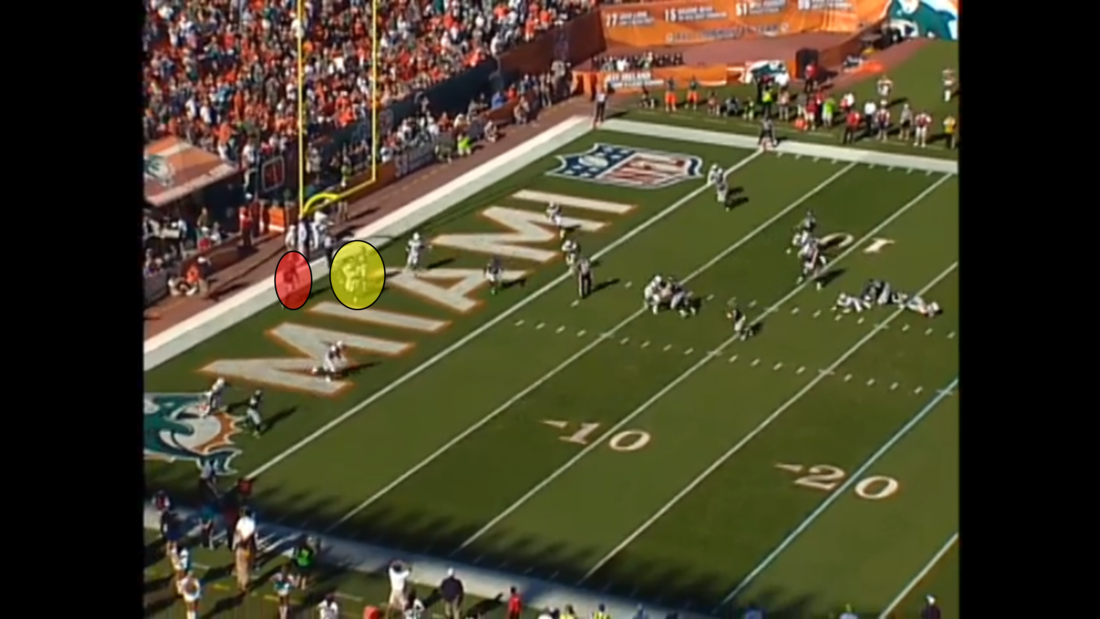 McCoy catches the ball in the corner, with Smith still trying to get there. 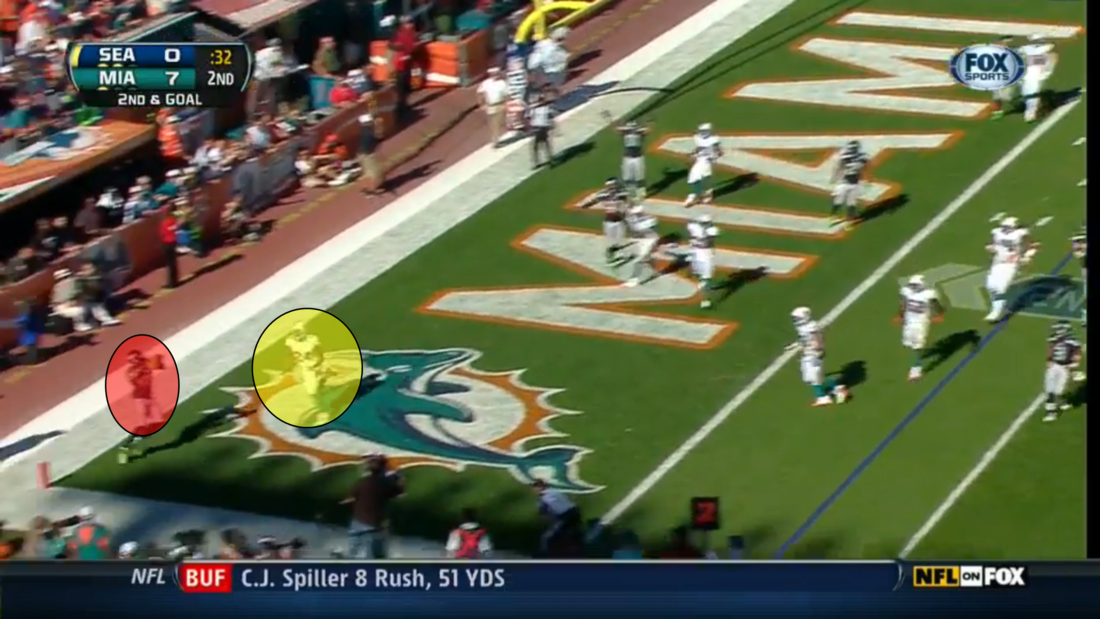 After the play, Smith looks back at the rest of the defense, trying to figure out what happened on the play. Fans immediately thought it was Smith's fault that McCoy was so wide open, but looking back at the film, it's clear that Smith did his job. The rest of the secondary broke down, and Smith was the only one who saw it and tried to make a play. 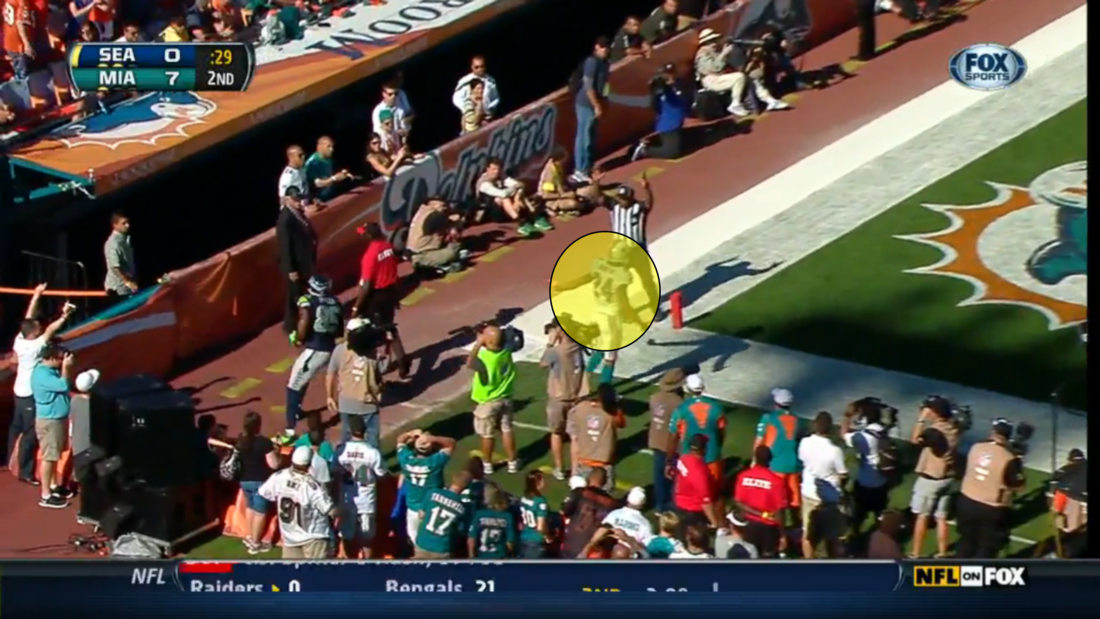 Ultimately, the Dolphins would win the game, so this breakdown would not come back to haunt the defense. But, it's something they will have to fix quickly if they want to be able to stop other teams from taking advantage of similar situations.