The Miami Dolphins beat the Seattle Seahawks 24-21, winning with a last second field goal from Dan Carpenter. During the first two of the team's three scoring drives in the fourth quarter, the Dolphins attacked the Seahawks three times from the same basic play, gaining chunks of yards on each variation.

The Miami Dolphins improved to 5-6 on the season after a 24-21 win over the Seattle Seahawks. The Dolphins entered the fourth quarter down 14-7 before three straight scoring drives pushed Miami to the win. During the first two of those three scoring drives, the Dolphins would execute the same basic play, with three different variations, to gain big yards three times.

The first time, the Dolphins ran this play, the team had the ball at the Seattle 18 yard line with 10:45 left in the game. The score was still 14-7, and the Dolphins had been effectively driving against Seattle. They lined up with Marlon Moore wide right, Davone Bess wide left, Antony Fasano on the right side of the line, and Daniel Thomas in the backfield behind Charles Clay. I've highlighted the three key positions in the formation, as will become apparent as we look at the three plays; they are the half back, the fullback, and the right wide receiver. 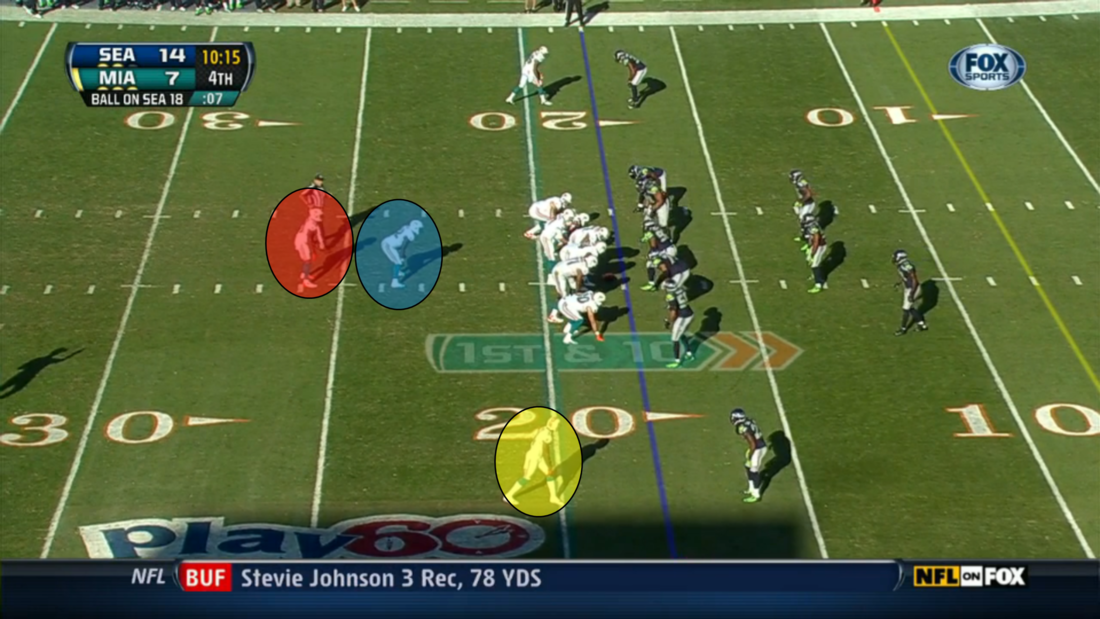 The play starts with Moore going in motion, and quarterback Ryan Tannehill faking a hand off to Thomas up the middle. Moore ends up with the ball on the end around, With both Thomas and Clay selling the fake, before they continue their paths through the lines and into the second level, looking to help Moore on the play. 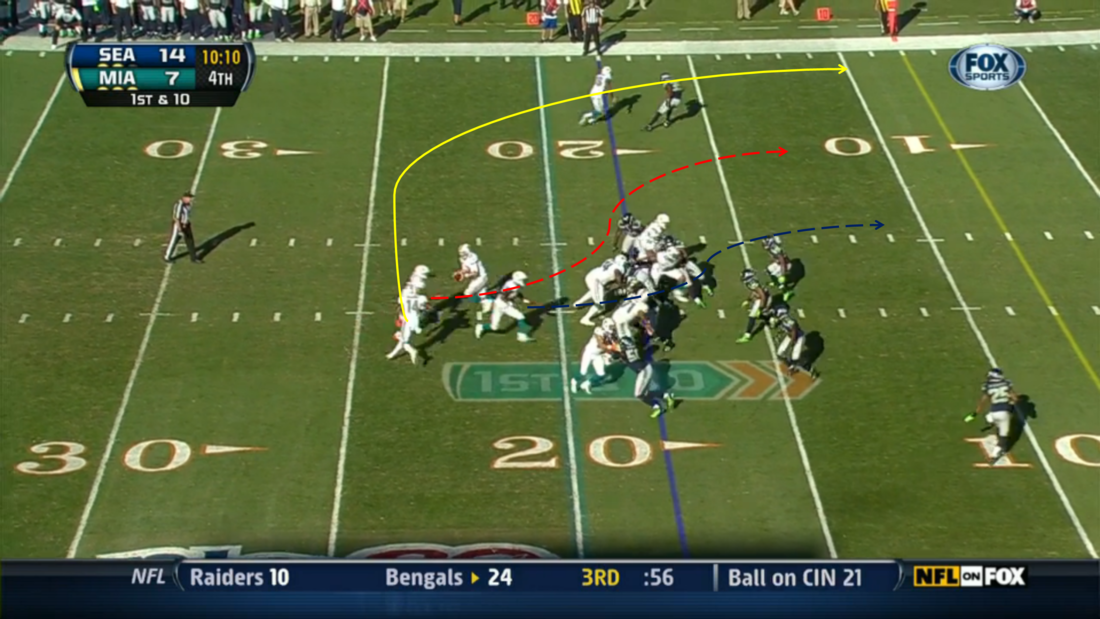 You can follow all three players throughout the play, with all of them looking like they could have been the ball carrier. 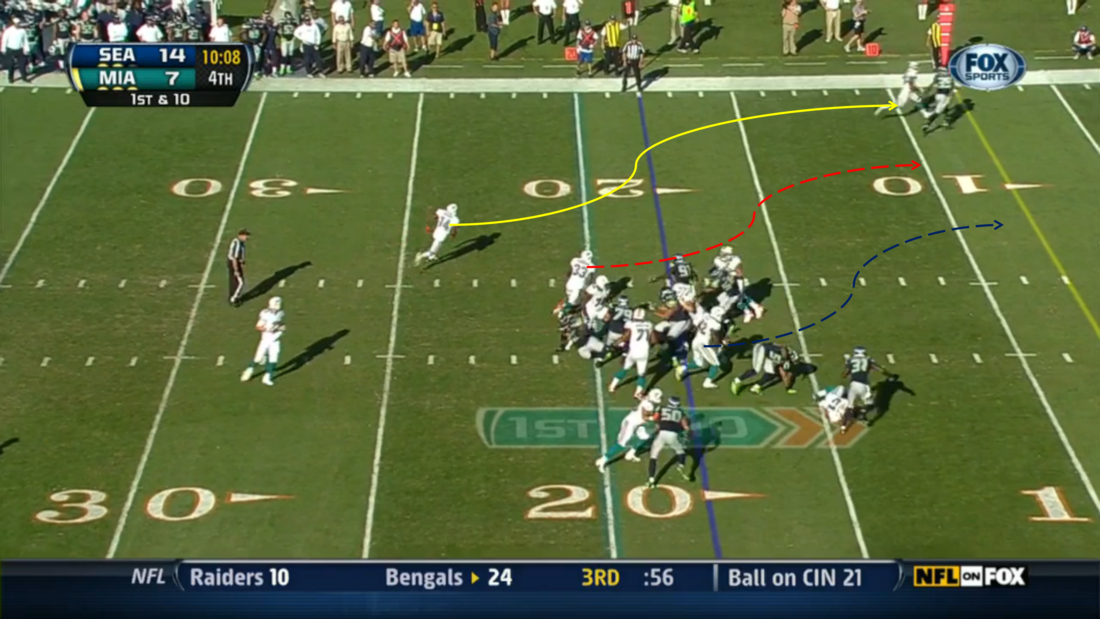 On the coach's film, you can see exactly where Moore is heading, as well as the Seattle's defense trying to recover after they bought the initial fake to Thomas. 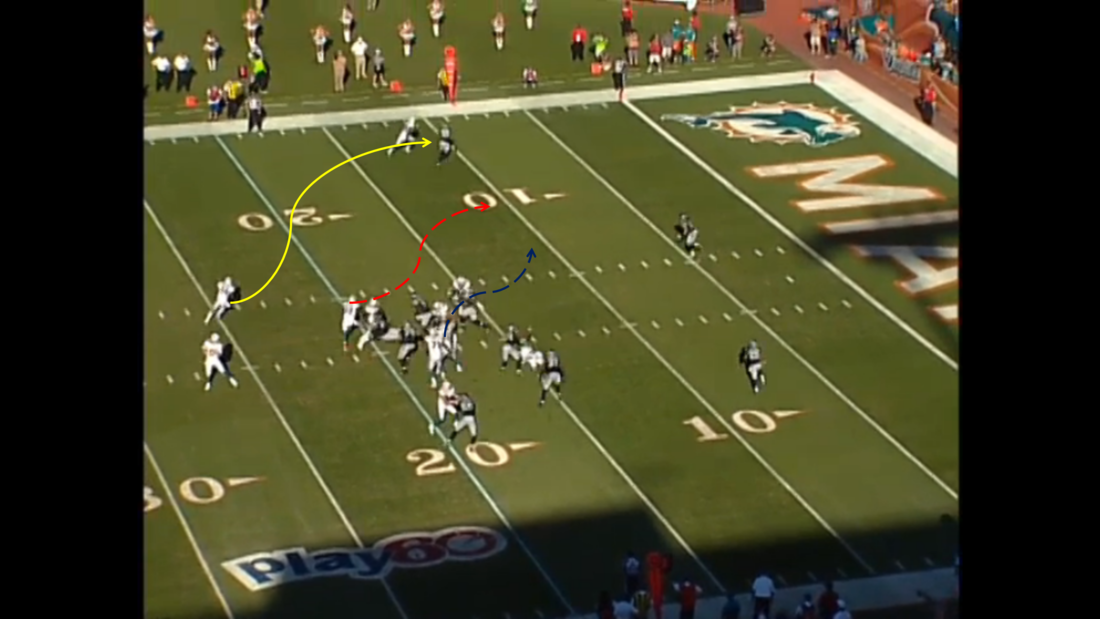 Moore clearly has the edge, and is going to get a big gain. How big is the only question left. Thomas and Clay at this point both have their targets to try to spring Moore the rest of the way. 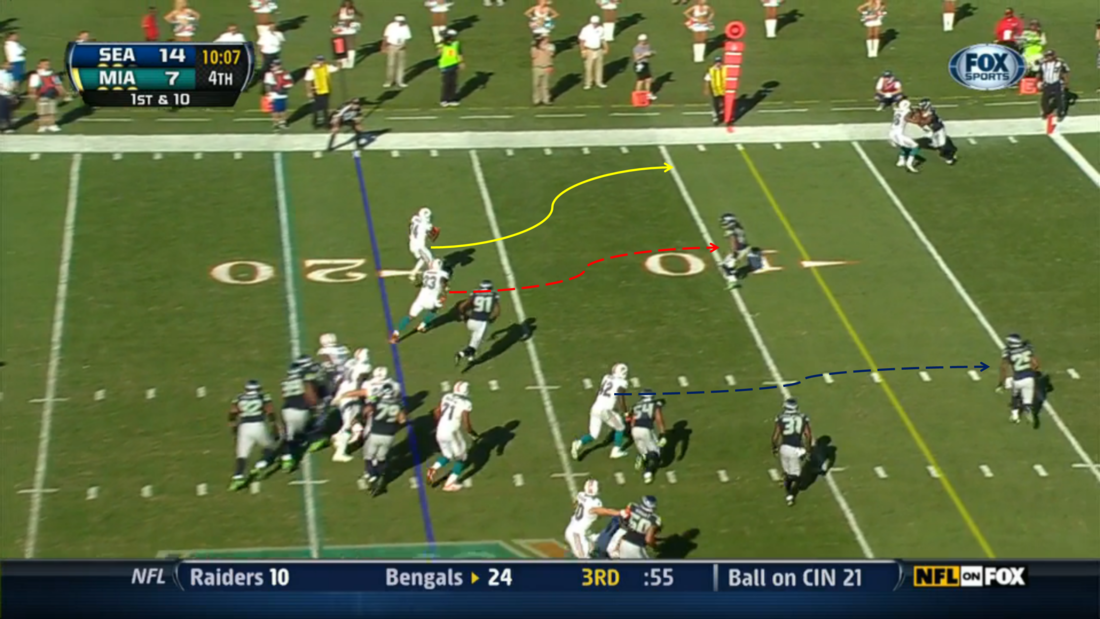 As the play ends, Moore is brought down after a nine yard gain, bringing the ball to the Seattle nine yard line. All three of our key positions are still in the picture, and, even bigger than the gain Moore had on the play, was the fact that this play set up the Dolphins for two even larger plays later in the game. 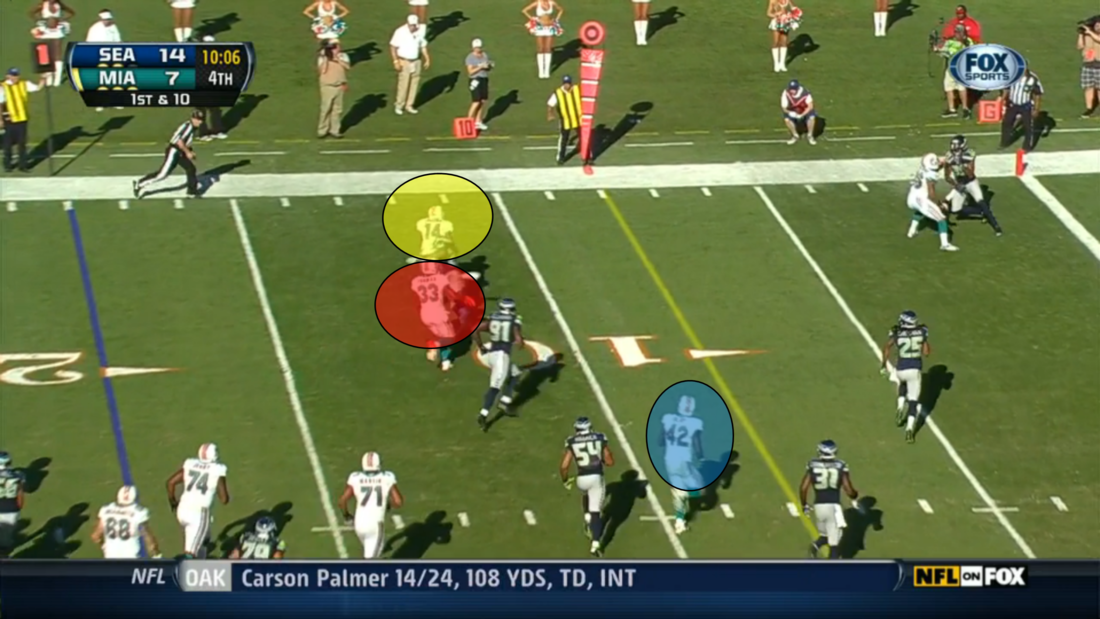 Miami would score a few plays later, bringing the ball game to a 14-14 tie. However, Seattle would immediately respond by returning the kickoff for a touchdown. As the Dolphins line up for their first play after the kick, once again down by seven, they again like up with two wide receivers split to either side, Fasano on the right side of the line, and two backs in the I-formation. This time, however, Brian Hartline plays the role of Moore, Reggie Bush is in for Daniel Thomas, and Jorvorskie Lane is the fullback. 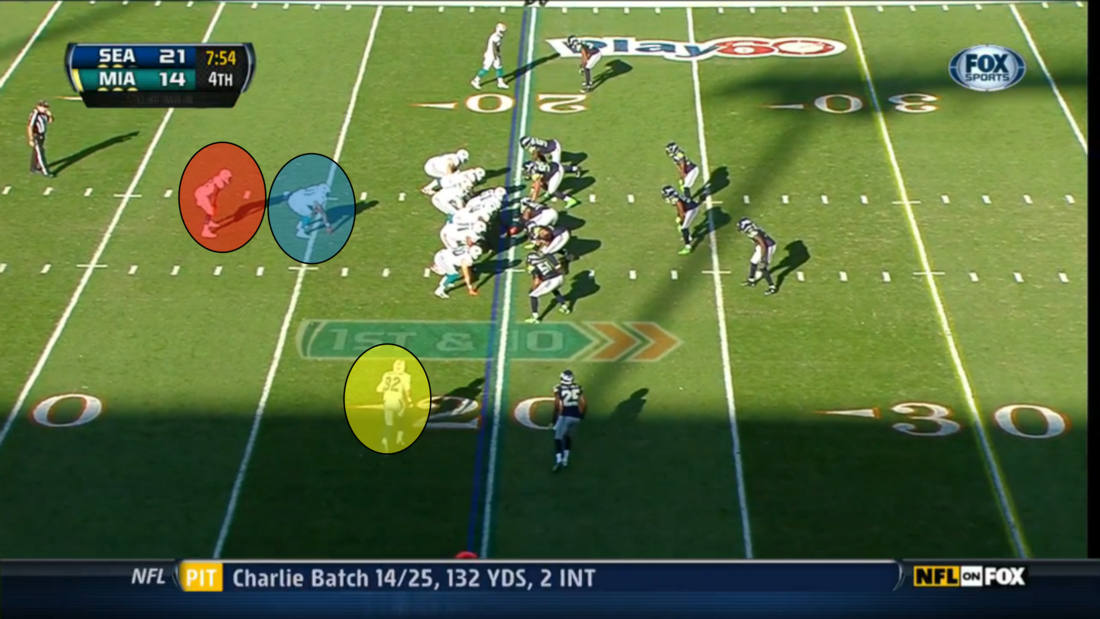 The Dolphins come back with the same play, except this time they hand the ball to the tailback, Bush, rather than the end around to Hartline. Everything looks to be set up for Bush to go left, and find that same hole in the field that Moore ran to earlier. 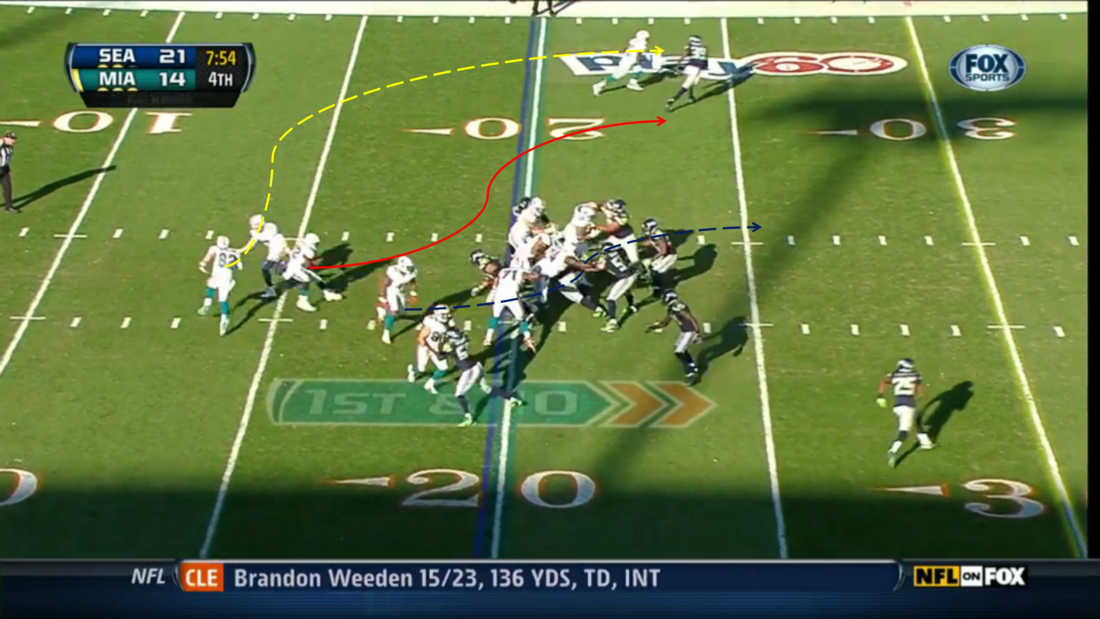 Instead, Bush comes back right, looking to follow Lane through the hole. However, there are more Seahawks in the hole than Lane can block, so Bush continues to the outside. At this point, Hartline's fake has run its course, and he is stopping. 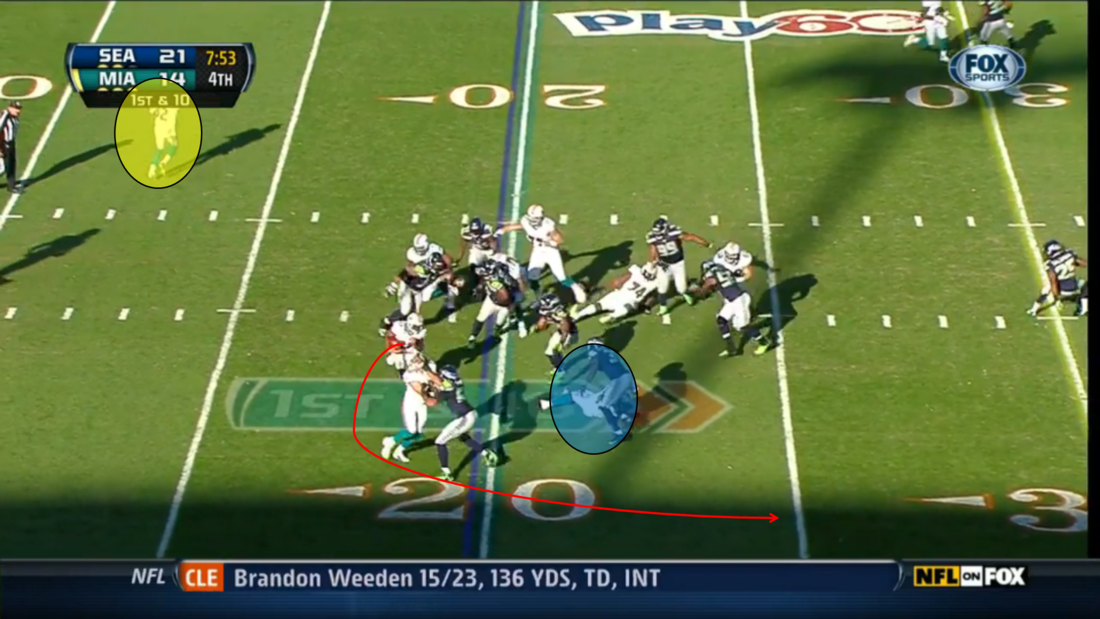 Switching to the All-22 footage, the Seahawks are clearly not going to let that end around fool them twice, with both the safety and the cornerback making a move toward the open gap where Hartline could be running. That frees up Bush if he can get to the edge. 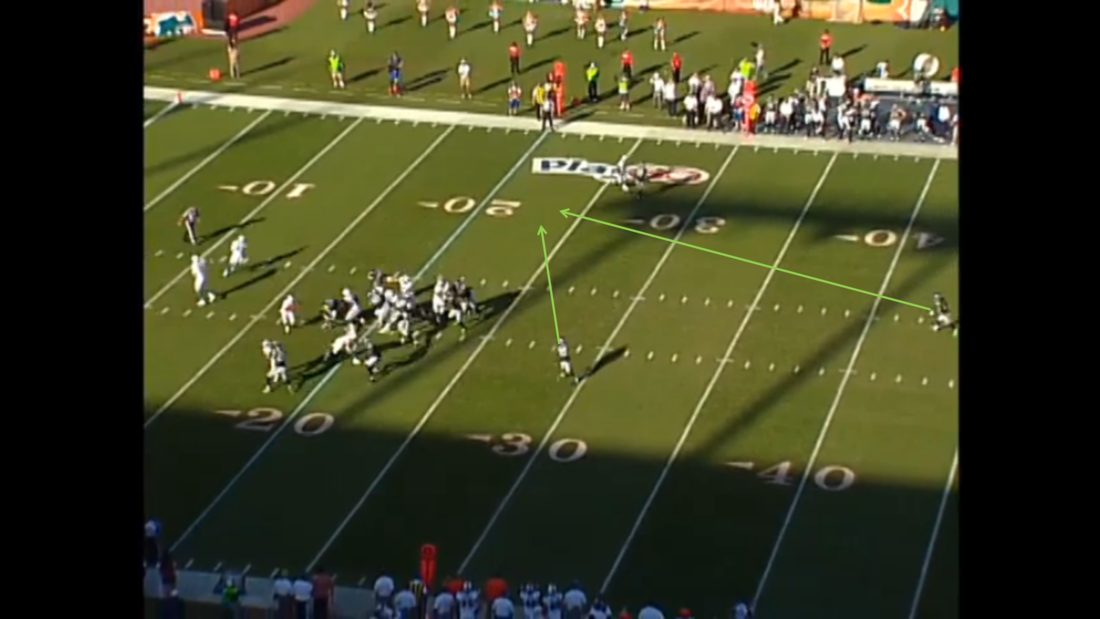 Once Bush has the edge, it's pretty much over except for the chase. 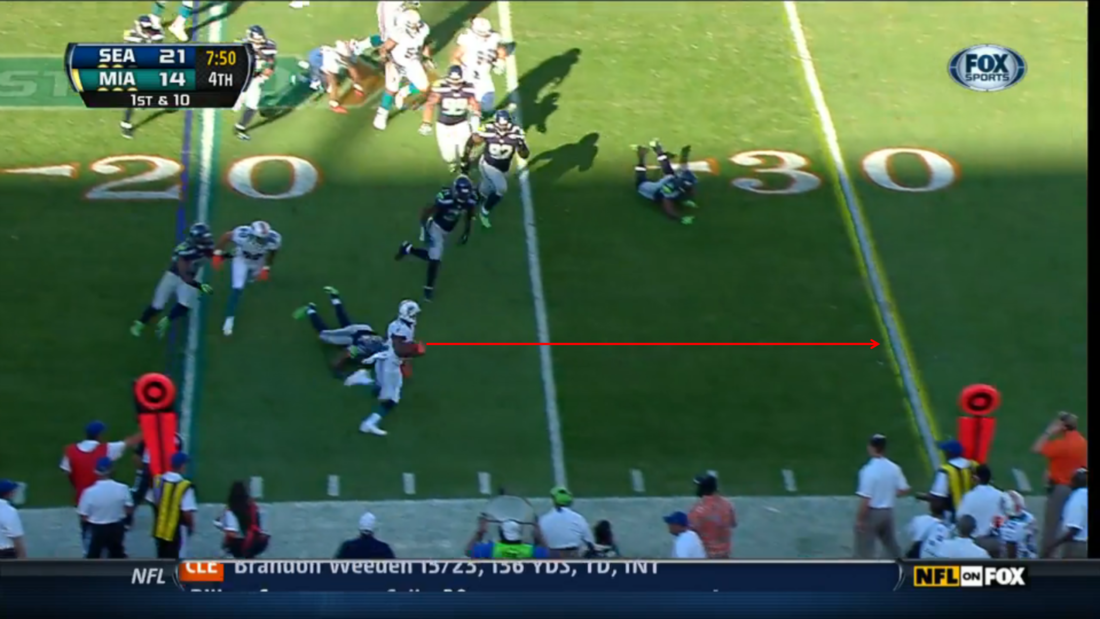 Eventually, the Seahawks are able to push the running back out of bounds after a 22 yard gain. 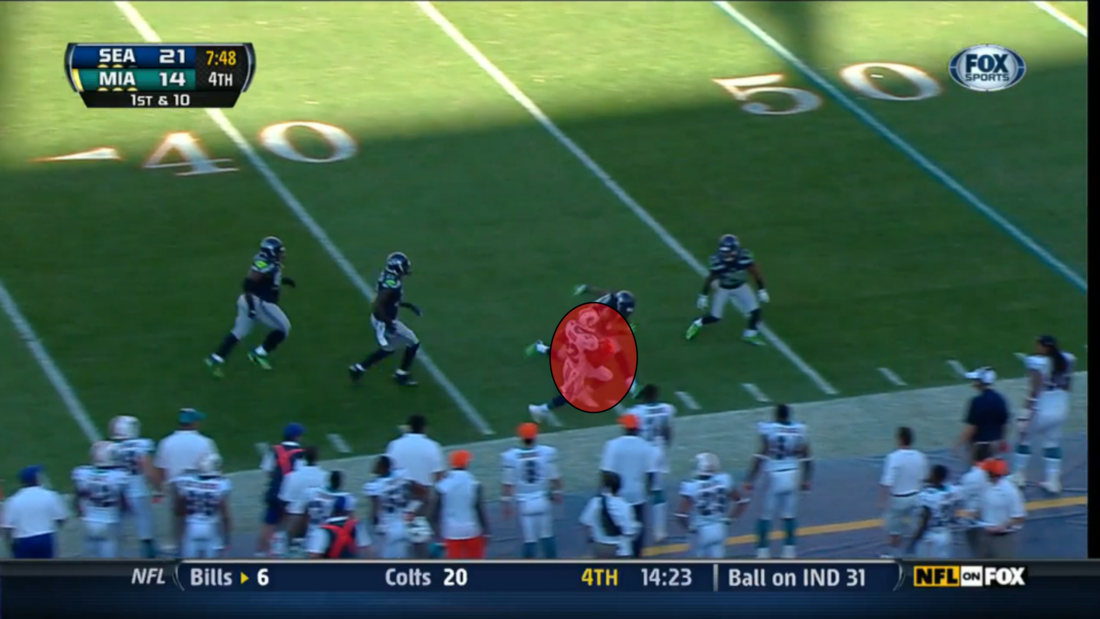 The Dolphins would return to the same play one more time, just over two minutes later. This time, they line up with both wide receivers (Moore and Bess) to the right, with Fasano on the left of the line. Bush is once again in the backfield, with Clay offset to the right. 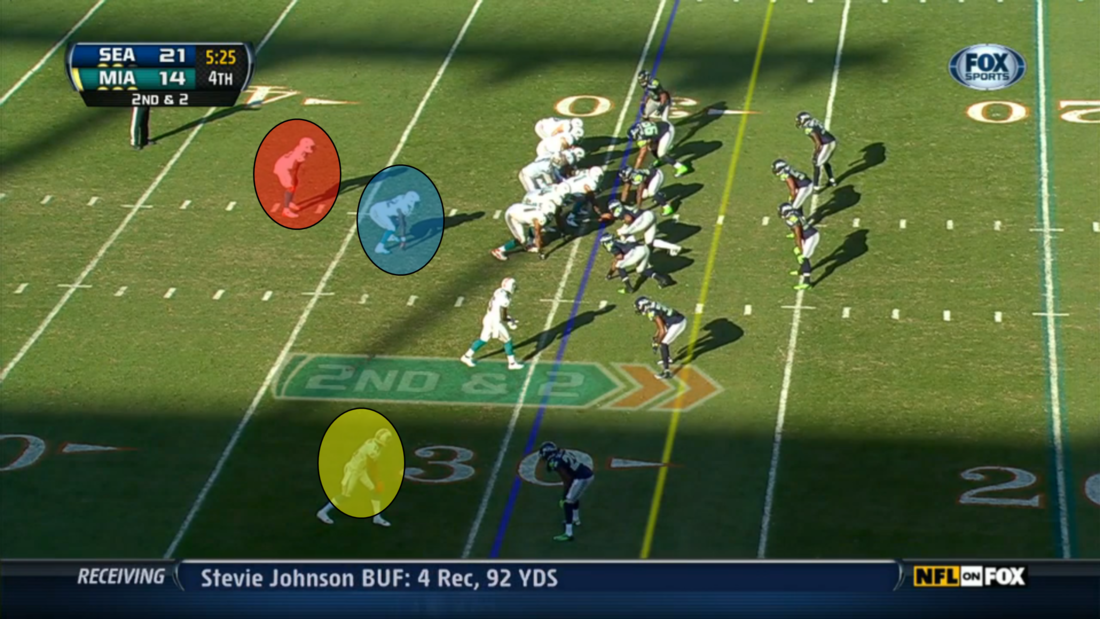 Again, Moore starts in motion, and he actually has to hesitate just as he passes Bess awaiting the snap. Otherwise, the play looks almost exactly like the other two versions. Moore is coming on the end around, with Bush looking to follow Clay if he gets the ball. 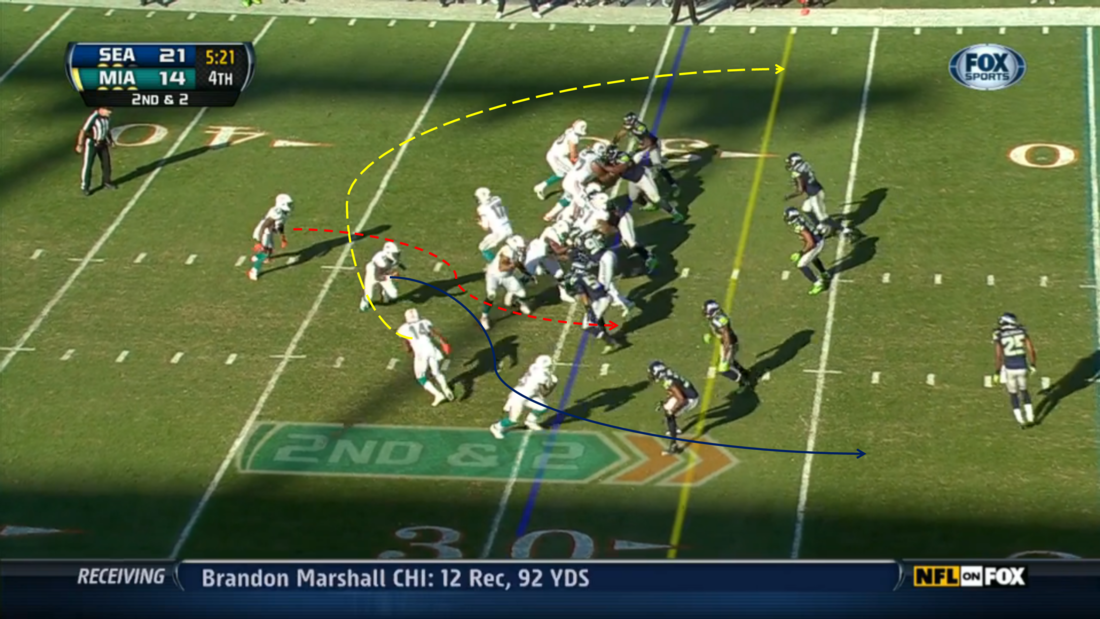 Except, this time, Tannehill fakes both handoffs, and Clay is the primary target. As soon as he sets his feet, Tannehill is looking directly at Clay, who is matched up on linebacker Leroy Hill. 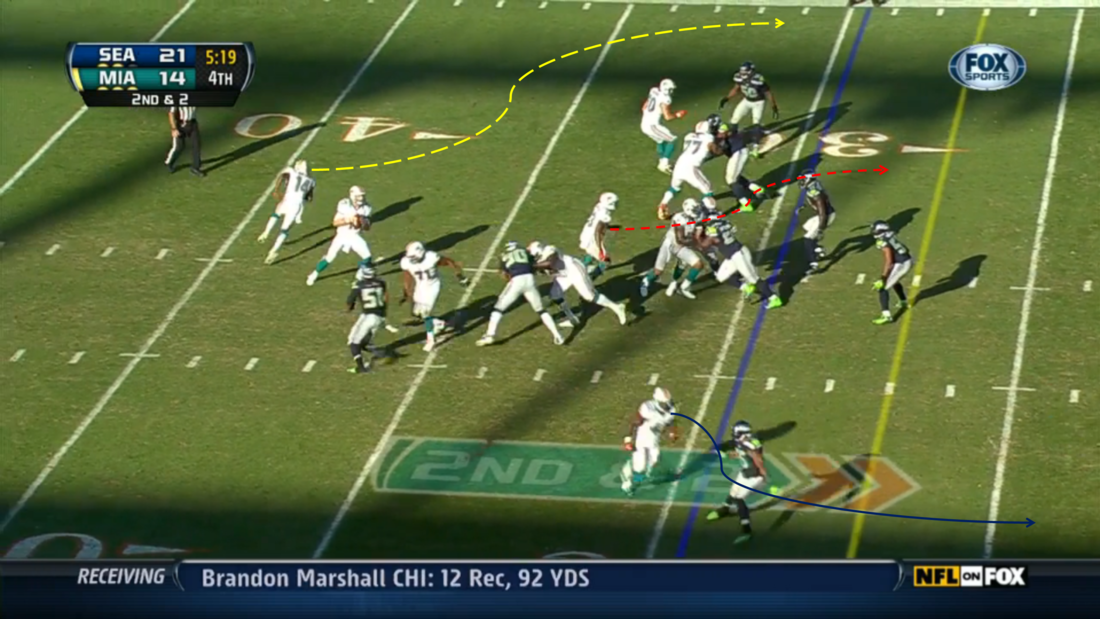 From the All-22 view, you can see the defense flowing with the end around, while Davone Bess (highlighted in orange) is attacking the safety and pulling his cornerback out of the way. Clay, meanwhile, is about to blast past Hill and into a completely empty area deep down the right side. 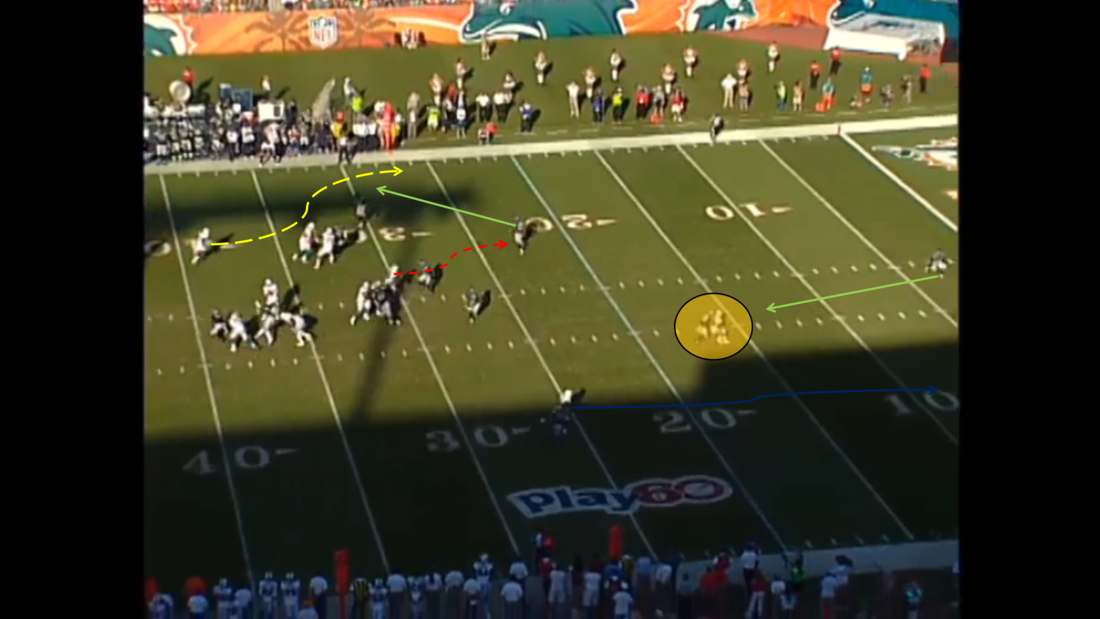 As Clay passes Hill and gets open, Tannehill (highlighted in gray) is already delivering the pass. Bess, meanwhile, has run a comeback route, which freezes his cornerback, but also pulls the safety toward him for another second, giving Clay all the room he needs to bring in the pass. 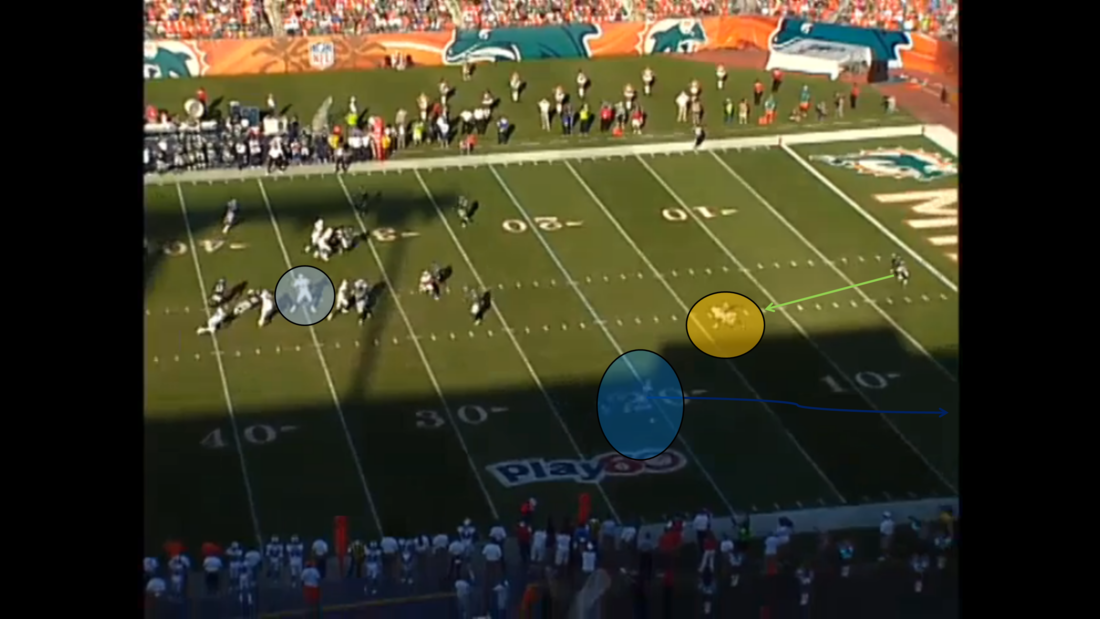 With the ball in the air, and no one anywhere near Clay, all that's really left to chance is Clay bringing in the ball. But, the tight end caught all six passes thrown his way on Sunday, so this one s going to be completed. You can see Bess and the cornerback both stopping to see what happens, while the safety has realized he is breaking on the wrong guy and tries to turn his line to meet Clay at the endzone. 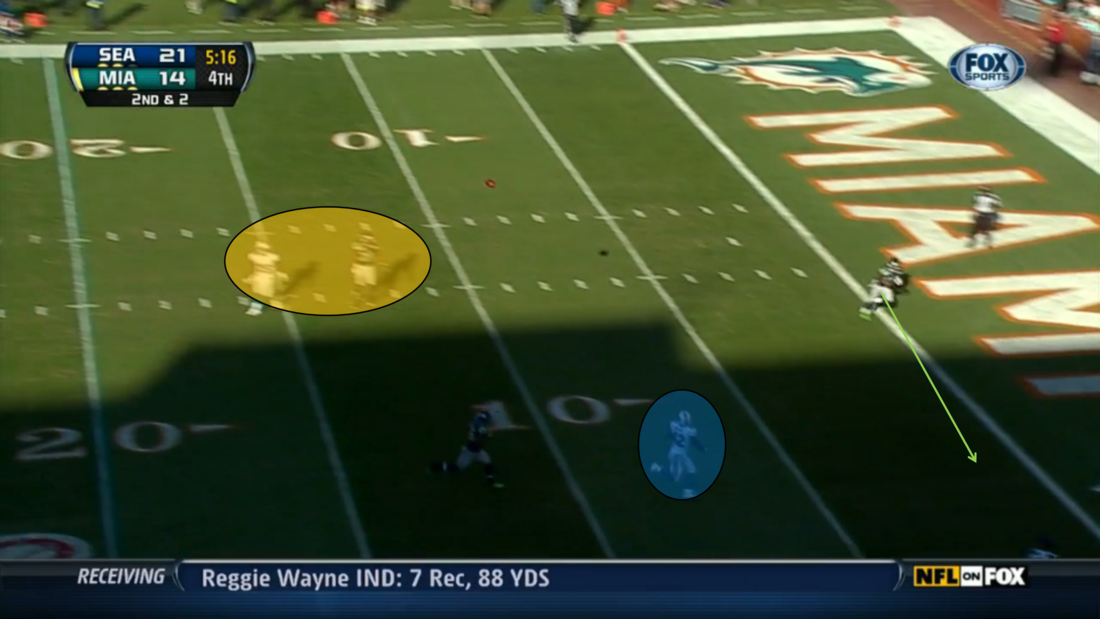 And, that's not going to happen, as Clay catches the ball in stride at about the half yard line, and walks in for the 29-yard score. 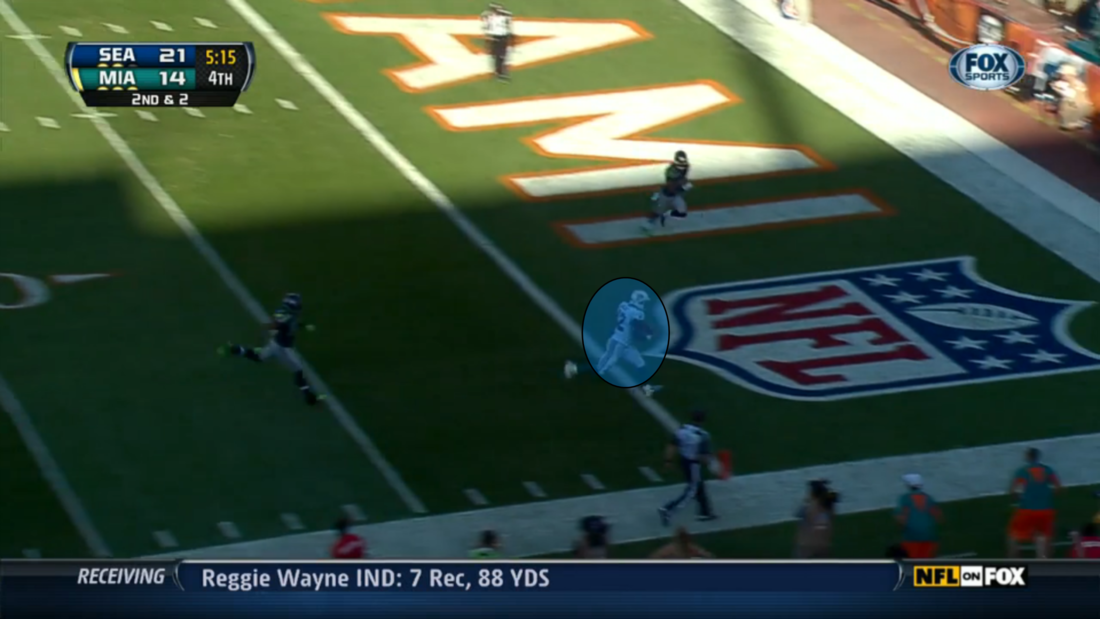 The Dolphins answer the Seahawks kickoff touchdown with another seven points of their own. With the game tied 21 all, Miami would stop Seattle's next drive, and come back down the field, moving 65 yards in 1:32 to kick the game winning field goal as time expired.

This season, offensive coordinator Mike Sherman has been criticized for conservative play calling, without much variation. However, on Sunday, he showed that variation. Three different variations of the same play, led to three big gains for Miami, and ultimately, the Dolphins would end up winning the game because of gains, and plays, like these.