Seahawks at Dolphins: Where to Watch, How to Watch, and What to Watch

The Miami Dolphins look to end their three game losing streak today as they host the Seattle Seahawks. Here's all the television and radio information, plus more to get you ready for the game.

Share All sharing options for: Seahawks at Dolphins: Where to Watch, How to Watch, and What to Watch

For the second time this season, the Miami Dolphins will play in a game featuring two rookie starting quarterbacks. The first of those contests featured the Dolphins taking on Andrew Luck and the Indianapolis Colts, with Miami losing and spinning from there into a three game losing streak. Can Miami end that losing streak by beating the Seattle Seahawks and rookie Russell Wilson? How can you watch the game? Of course, we have all the information you need.

Time: 1:00 pm Eastern
TV - Fox
Announcers - Chris Myers, Tim Ryan
Related: Looking for Miami Dolphins Tickets?
According to The506.com, today's game's television coverage is pretty easy to describe. All of the Pacific Northwest will get the game, from northern California and northwestern Nevada through all of Oregon and Washington, then over through almost all of IDaho and into Montana and Wyoming. In Florida, the game will be seen along the eastern coast of the state, from Miami up to the edge of the Jacksonville market, and will include Orlando in central Florida. 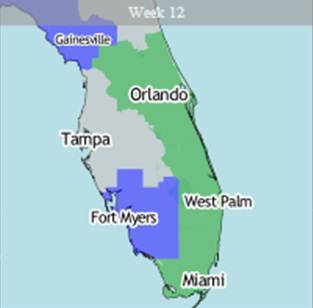 Obviously, CBS is going to be the place to watch this week in the markets, but every where else in the country, DirecTV's NFL Sunday Ticket package will air the game on channel 705.

1. Miami Rush Defense vs. Marshawn Lynch - Lynch has been going crazy lately, already topping 1,000 yards on the season. He has rushed for over 100 yards in each of the Seahawks' last four games. Meanwhile, the once formidable Miami rush defense has fallen off the past two weeks, allowing Chris Johnson (126 yards) and C.J. Spiller (91 yards) to run wild on them. If Miami wants to stay in this game, they are going to have to contain Lynch and force Wilson to throw.

2. Dolphins Offense vs. Seahawks Defense - Okay, this may seem obvious, given it's exactly what we are watching on TV (or in the stadium), but this is extremely true. Miami's offense was anemic last week against the Buffalo Bills, only gaining 184 total yards. The Seahawks come into this game with the third ranked passing defense and the eleventh ranked rush defense. If the Dolphins cannot find some way to attack the Seattle defense, it will be a long day in Sun Life Stadium.

3. Special Teams - If any part of the Dolphins has been playing to a high level lately, it's the special teams. From field goal blocks, to kick or punt returns, the special teams have kept Miami in games. Other than allowing a punt return touchdown last week, Miami's special teams have been, well, special lately. Brandon Field is kicking the air out of the ball every time he punts, and the rest of the players are looking to make a difference every time they are on the field. With the success the Seahawks have been having this year, the Miami special teams may be called again to keep them in the game.

"I think we told the guys the first day we got together in April that the NFL is a competitive business. It's a tough business and none of us have insured lifetime deals and contracts and those types of things. Our longevity is based on performance; coaches have to perform, players have to perform. Again, where you fall on the spectrum... we use the analogy that whether you have had 135 games like Karlos Dansby or you're playing you're 11th game like a rookie might be playing this week, it doesn't matter. Your job is to perform." - Miami Dolphins head coach Joe Philbin on trying to get the "win now" mentality into the younger players like it is in the veterans, 11/23/12

"I'm looking forward to getting the win. That's what I'm looking forward to. I'm not so worried about who's on the other side of the field. This game is really going to come down to our ability to execute and just finding a way to win this game, getting better as a team, running the ball better, passing the ball better, just executing in all phases of the game." - Miami Dolphins running back Reggie Bush on playing against his old coach Pete Carroll, 11/23/12