The Miami Dolphins lost to the Buffalo Bills Thursday night. As we look back at the game, there are several "what if" moments that could have led to a different result at the end of the game. One of those was a third quarter incomplete pass from Ryan Tannehill intended for a wide open Charles Clay - if Tannehill was accurate on the pass, the team had a big gain at worst, and a touchdown at best.

The Miami Dolphins have the day off, thanks to playing a Thursday night game against their division rival Buffalo Bills. Miami lost that game 19-14, and looking back, there are several moments that could have changed the outcome. One of those came late in the third quarter, with the Dolphins down 19-7 and driving, for the first time, into Buffalo territory.

With 2:48 left in the quarter, Ryan Tannehill lined up in the shotgun on second and ten. 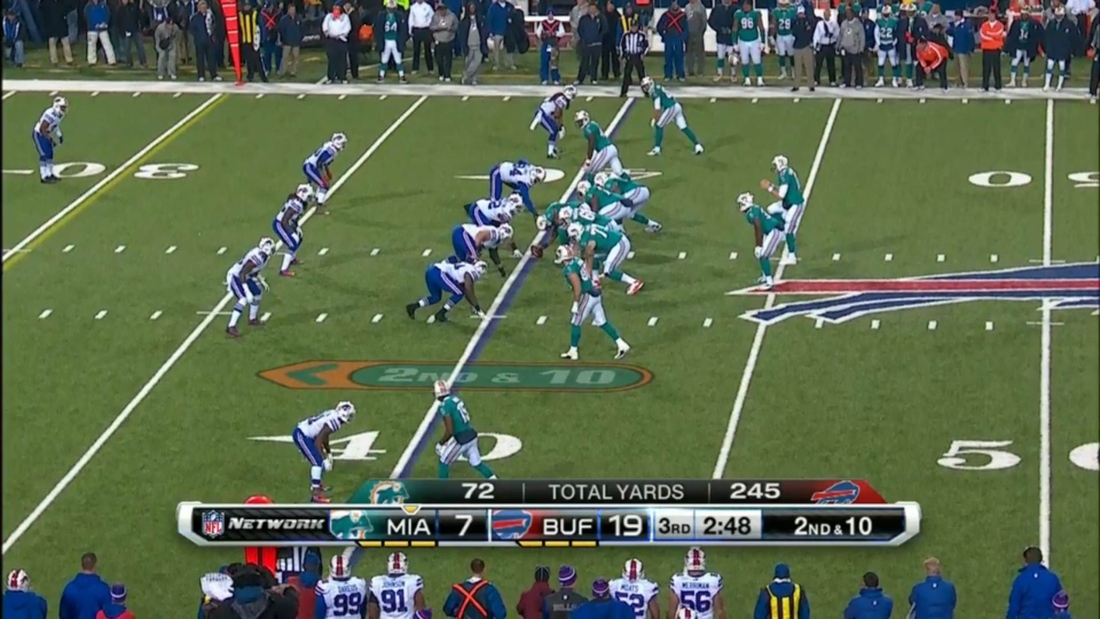 As Tannehill prepares to snap the ball, the middle of the field appears to be wide open. Charles Clay, who ultimately will be targeted on the play, is lined up in the slot to the offense's right. 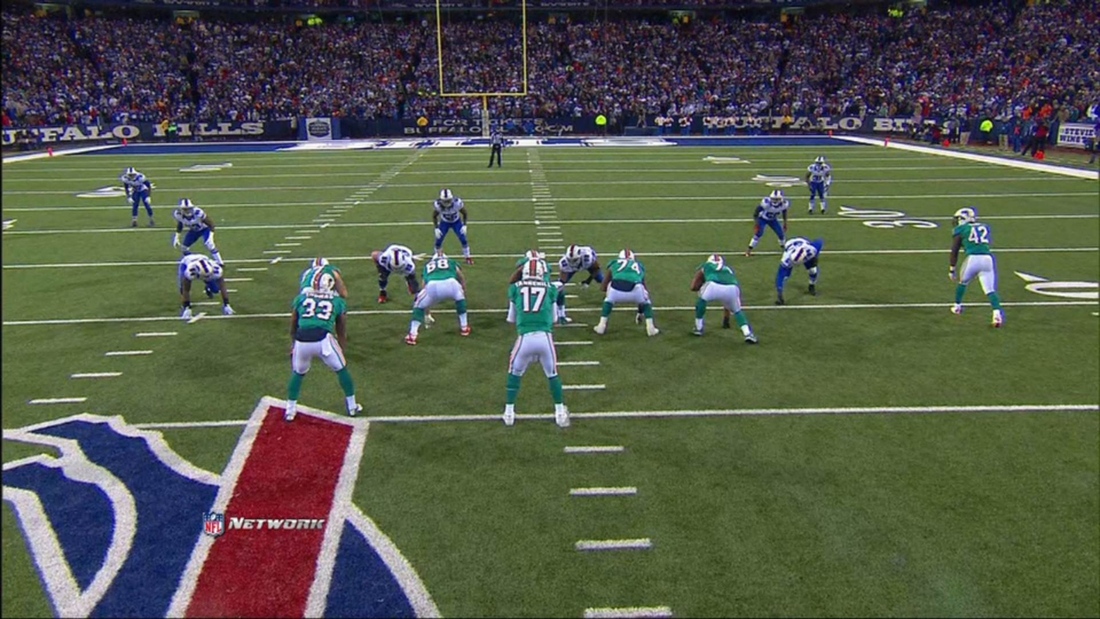 The Bills are playing a man-to-man coverage scheme, with the safeties dropping into a zone coverage. The Dolphins run a play action pass, with Tannehill faking the hand off to running back Daniel Thomas, who will then attempt to move into the flat, giving Tannehill five possible targets on the play. 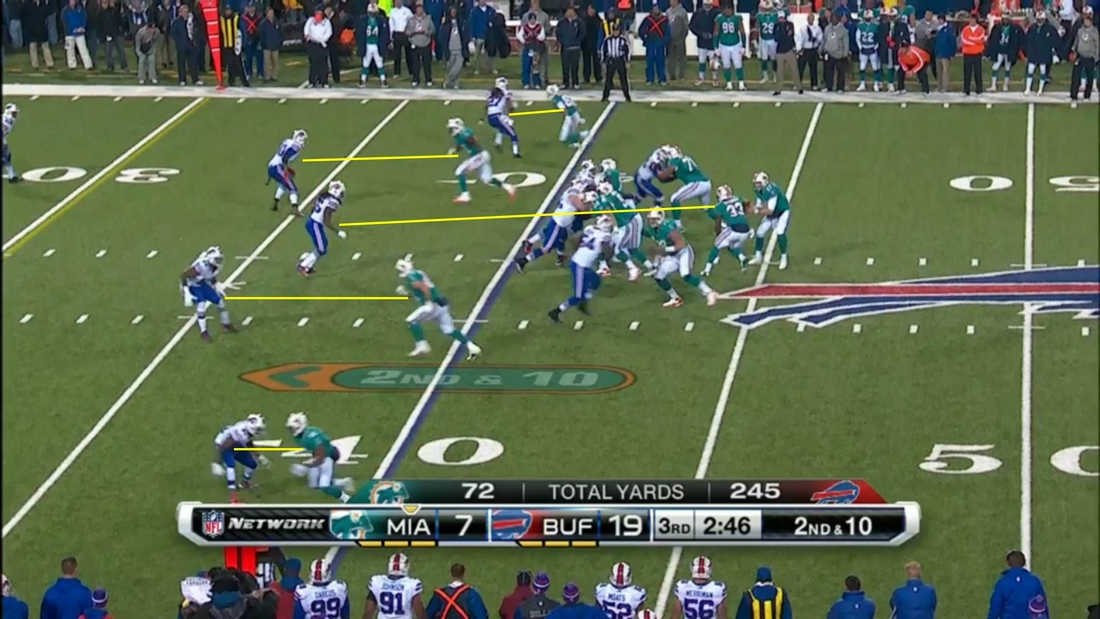 Getting a better look at the field, using the All-22 coach's film, the Bills' defensive scheme is clear. Buffalo is dropping into a conventional cover two, with the two safeties splitting the field in half. 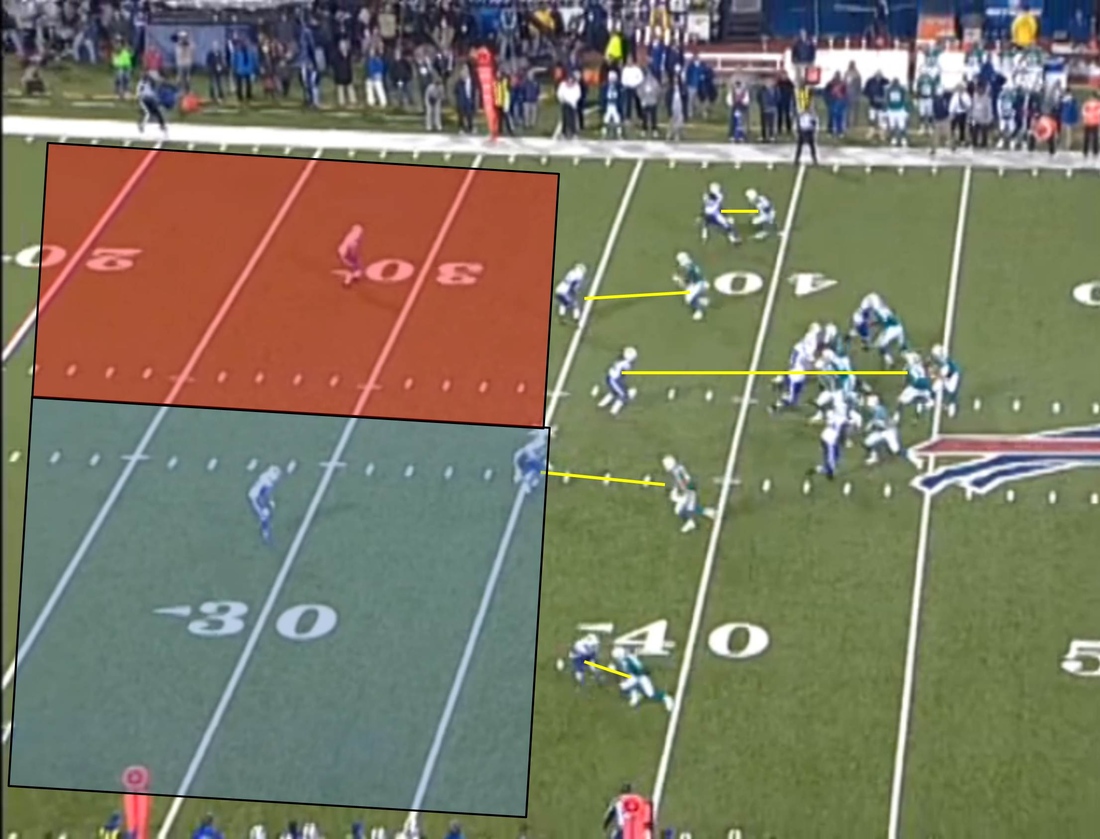 After the fake, Tannehill starts looking to his left. He has tight end Anthony Fasano running a short out route here, but sees that it is covered. Meanwhile, Clay is cutting into his post pattern down the seam, and the linebacker covering him has mis-played the route, not expecting Clay to go deep. 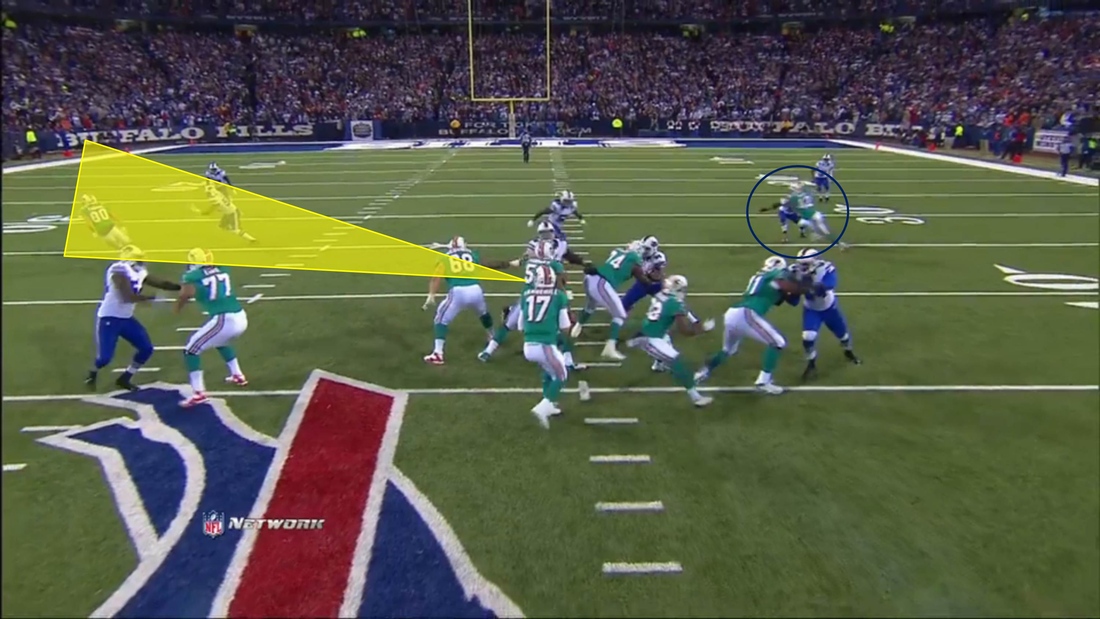 Turning to look at the offensive line, they are doing an exceptional job on the Bills pass rush on this play. Jake Long is left alone, and is able to handle it fine. Richie Incognito, Mike Pouncey, and John Jerry are able to triple team two blockers, while Jonathan Martin does well alone on the right side of the line. The only issue at this point, and it really has zero bearing on the play, is Thomas does not get a clean release into the flat, with Martin blocking his initial path. 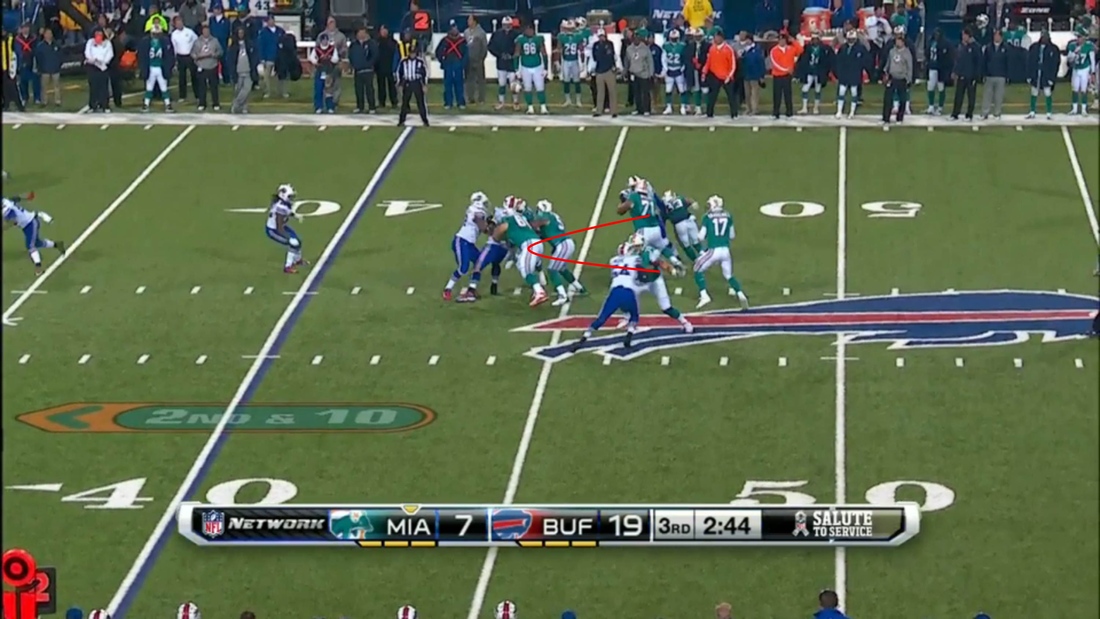 Moving back behind the line of scrimmage, the pocket the offensive line has formed is even more evident. Tannehill has now turned his attention to the empty middle of the field, with Clay breaking out of his coverage. The two safeties are still in the middle of their respective zones, with neither realizing Clay is about to be wide open. 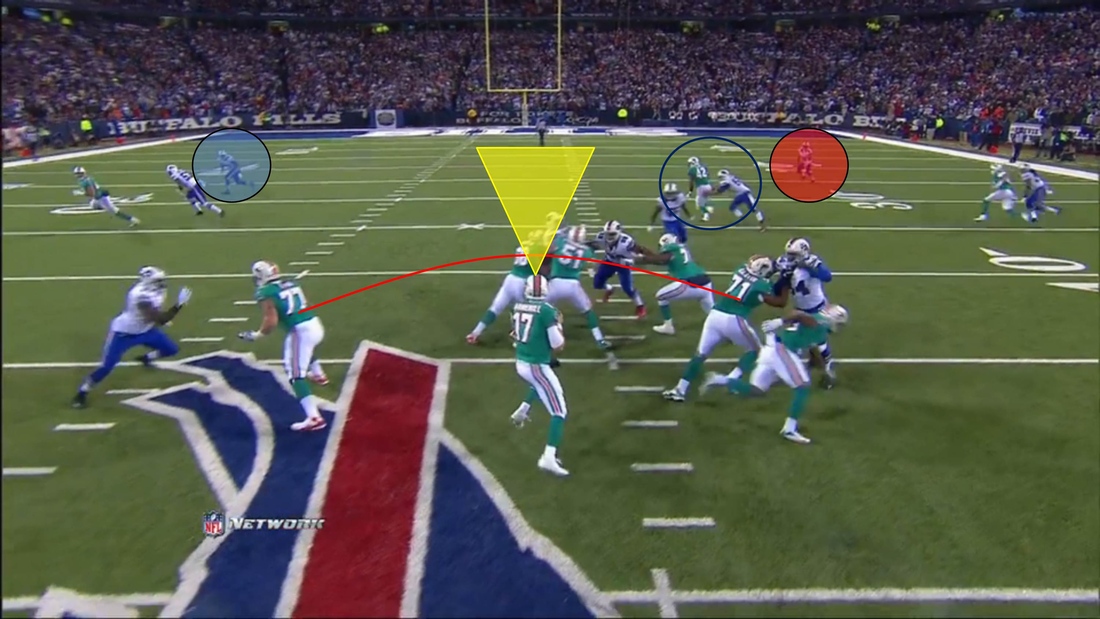 As Tannehill throws the pass, Clay has beaten his man, linebacker Nick Barnett, and the safeties are still out of position. The safety on the offense's left, strong safety George Wilson, is still playing the deep boundary route in his zone, while free safety Jarius Byrd has recognized the danger and is starting to move toward Clay. 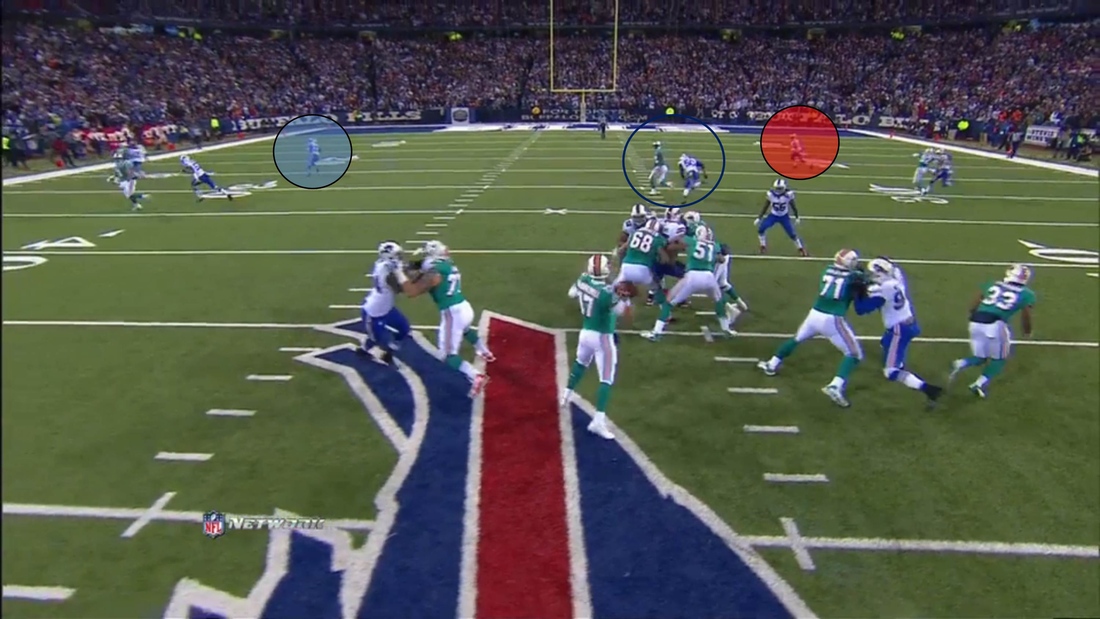 Changing back to the All-22 film, the safeties are far enough away from the play that Tannehill just needs to lead Clay down the center of the field, and the team will have a large gain, if not a touchdown. However, Tannehill is inaccurate with the throw, either in an effort to keep the ball away from Byrd or just from a bad throw, and the ball, as shown by the dotted line below, will be placed outside the left hashmarks, too far away from Clay for a completion. 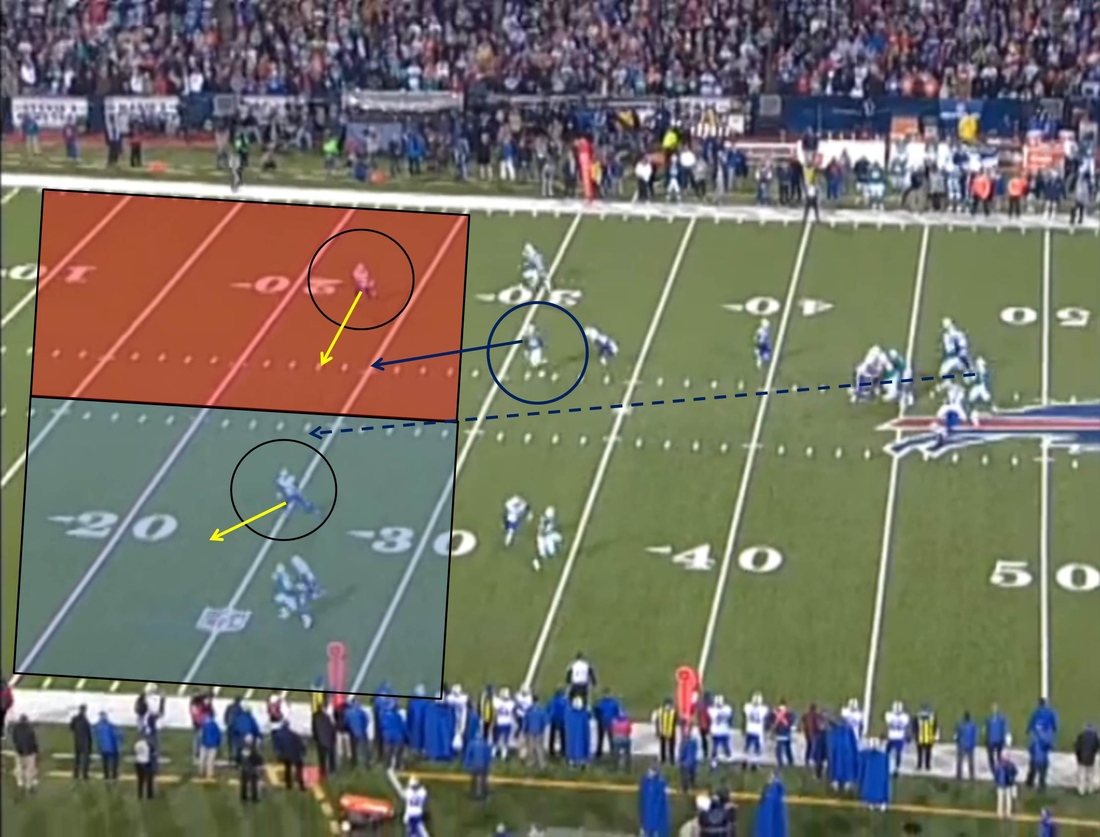 The ball, highlighted in the yellow circle below, is just out of reach of Clay, and ends up falling to the turf. With the field as open as it is for Clay, Miami may have missed a chance to put seven points on the board with this incompletion. 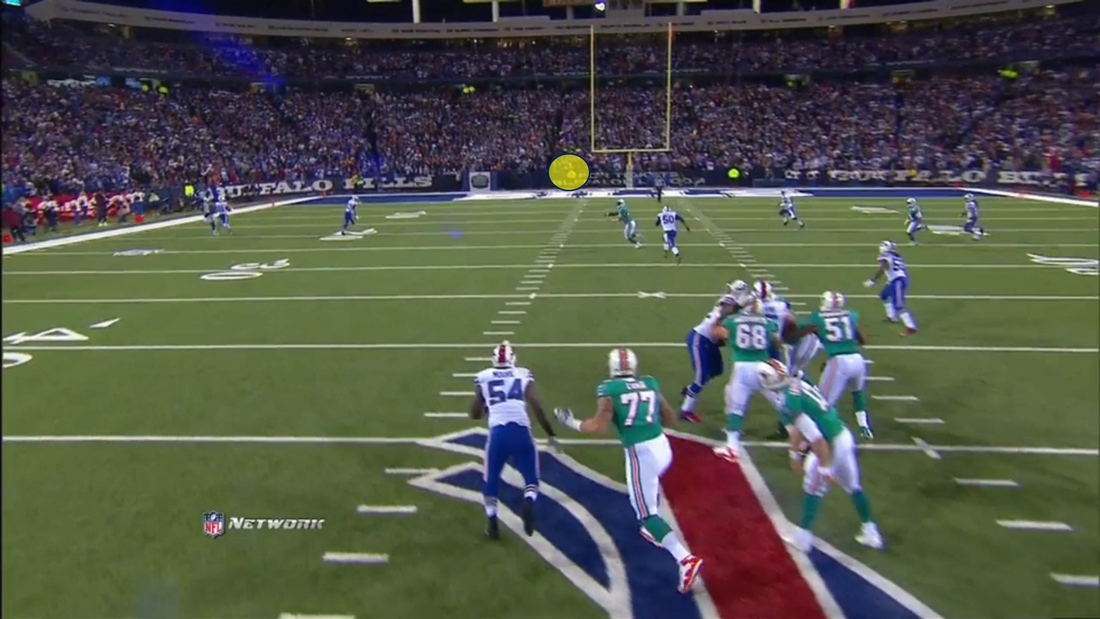 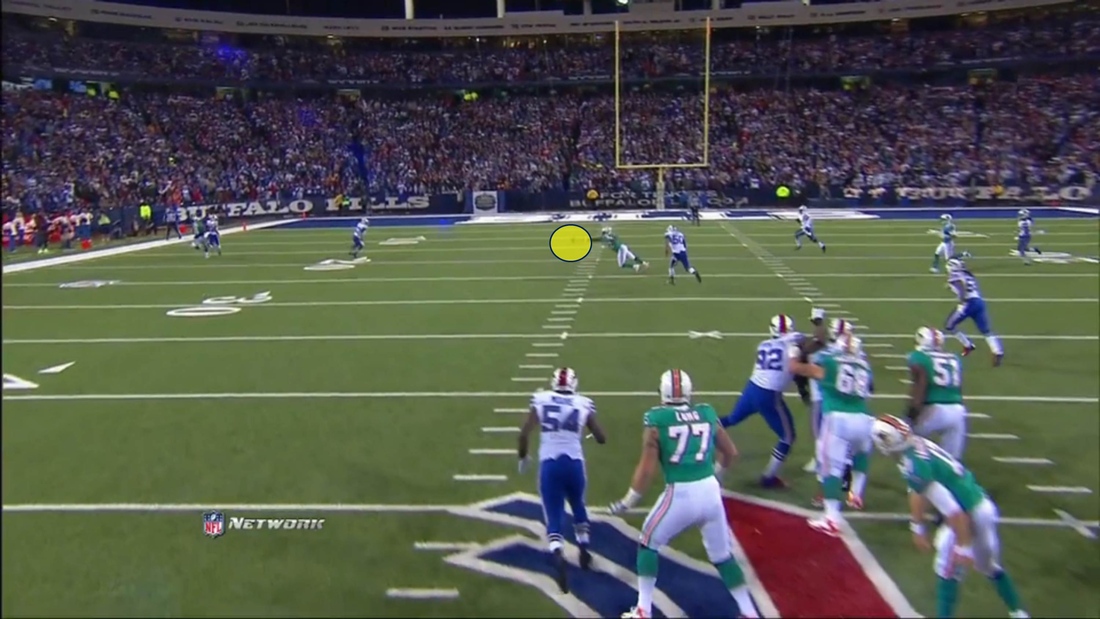 The Dolphins would get a first down on the next play, thanks to a Bills penalty, but the drive would stall and the team would settle for a 50-yard field goal attempt from Dan Carpenter. The kick would hit the right upright and the Dolphins would lose a chance to pull closer to the Bills.

In this instance, the play call was perfect for the Dolphins. They took advantage of Clay's athletic ability to beat the linebacker, and had the deep boundary routes drawing the safeties away from the middle of the field. Clay is able to beat his man, and Tannehill makes the correct read, coming back to Clay for what should have been a big play. Unfortunately, as Richie Incognito said via Twitter this week, the team was unable to execute the play correctly and capitalize on the advantage they had on the play.