The Miami Dolphins lost to the Buffalo Bills Thursday night, dropping to 4-6 on the season. They only allowed one touchdown to their AFC East division rivals, a punt return from Leodis McKelvin.

The Miami Dolphins lost their third straight game Thursday night, dropping an AFC East division game to the Buffalo Bills. The Miami defense epitomized the "bend-don't-break" mentality known of them under Tony Sparano's regime, allowing a team to move down field but holding them to a field goal in the end. The Bills' only touchdown came on a first quarter punt return from Leodis McKelvin.

Just over a minute into the game, the Dolphins had been held to a three and out after gaining seven yards. The Dolphins lined up to punt: 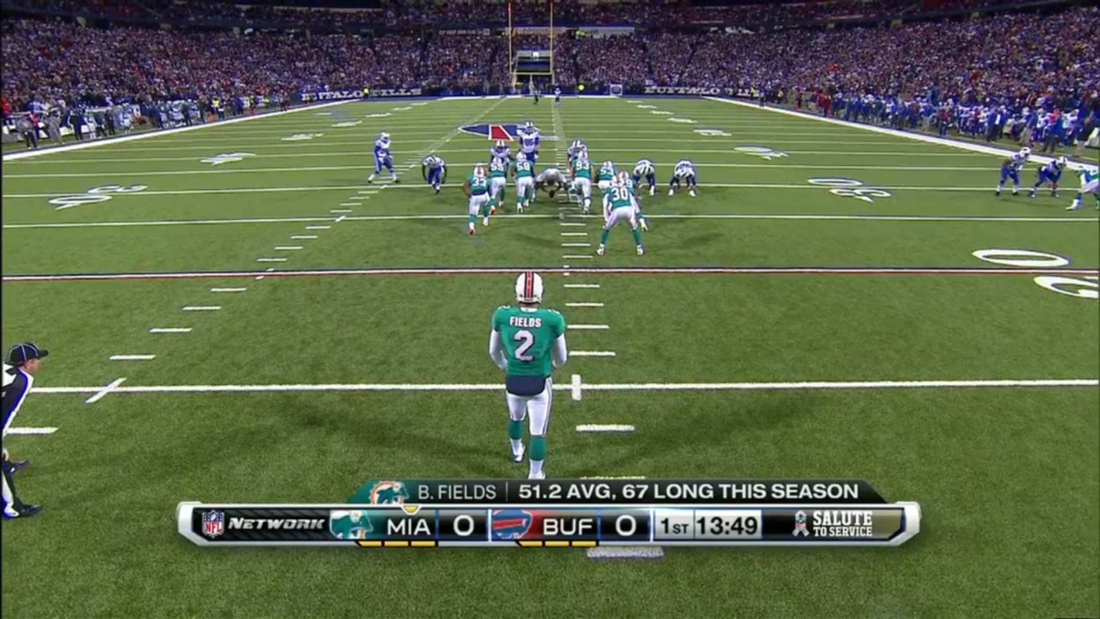 As Brandon Fields punted the ball, he is run into by the Bills' Brad Smith. However, the referee, rightly, did not throw the flag because Daniel Thomas blocked Smith into Fields. 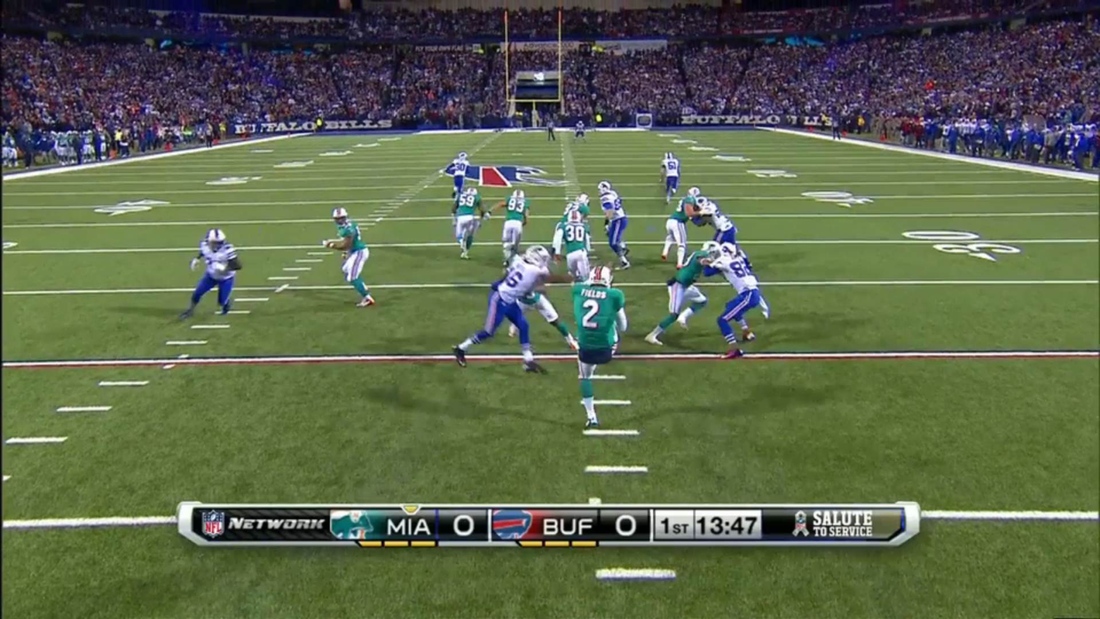 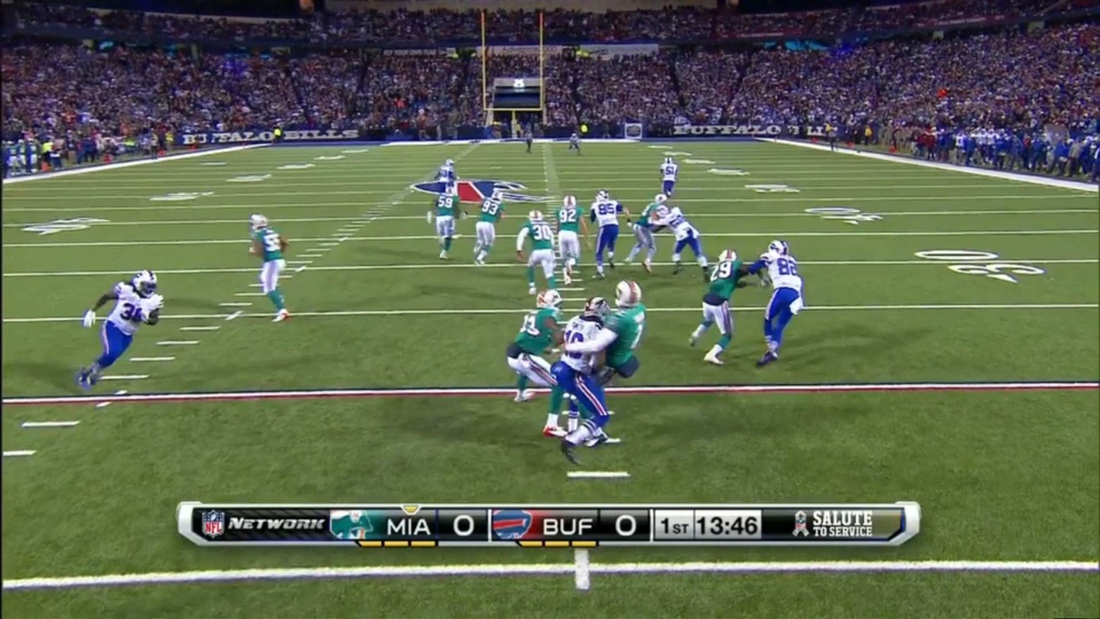 As McKelvin fields the punt, Jimmy Wilson, the gunner coming down the Dolphins' right side of the field, is knocked to the ground by the defenders. He will quickly recover, but with the two defenders covering him, he will not be a factor in the play. 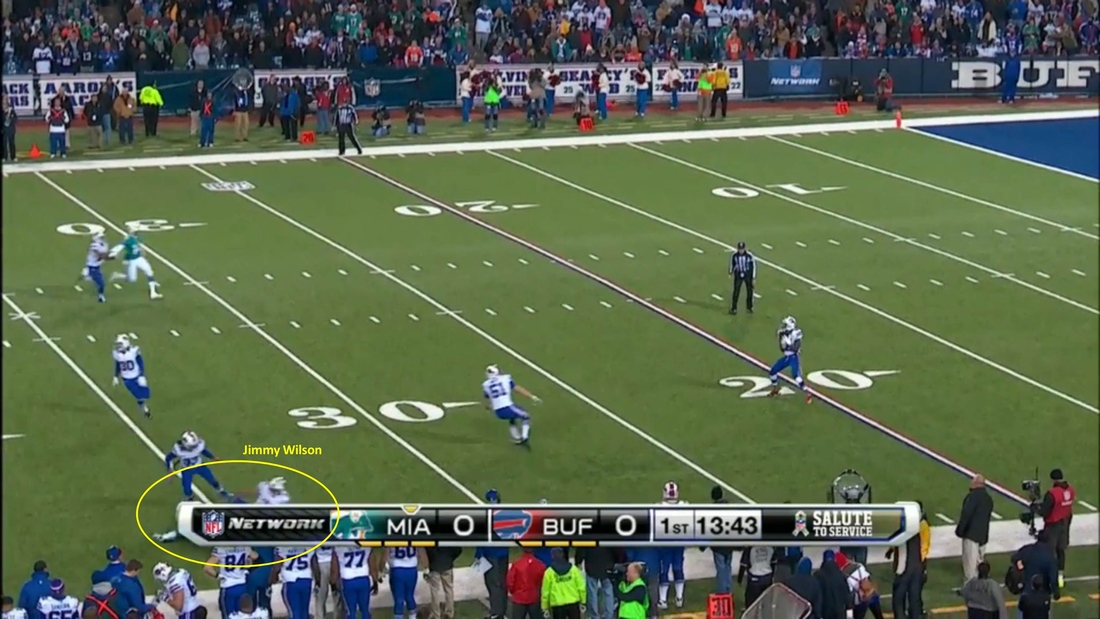 As the rest of the Dolphins' coverage team gets down field, they clearly wall off McKelvin, forcing him to his left, and should be set up to tackle him after a short gain. 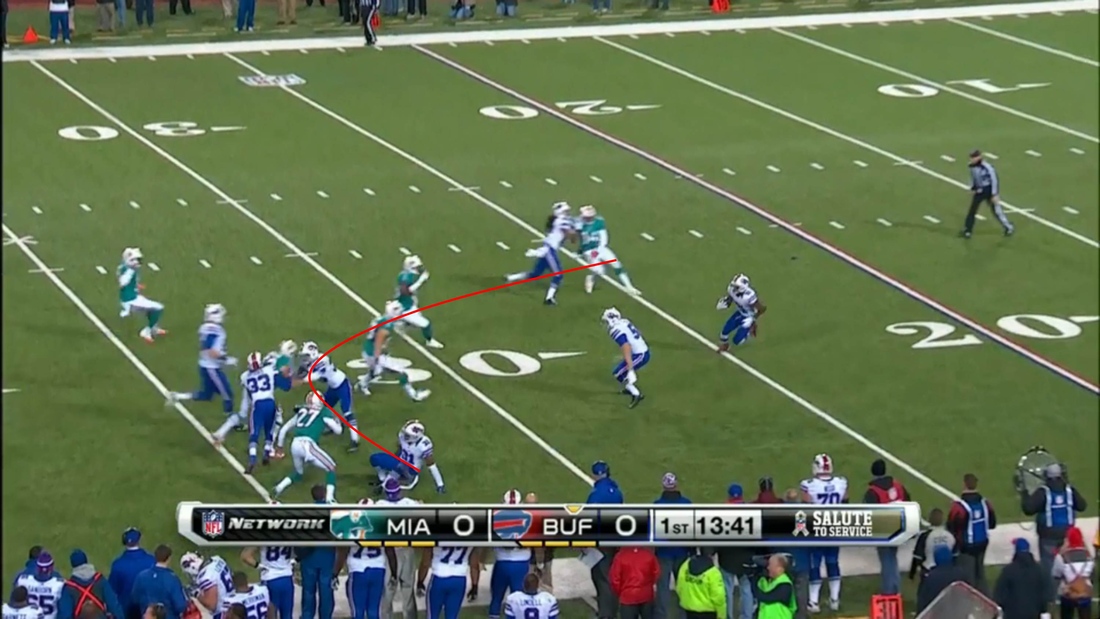 Advance the film another couple of frames, and the wall becomes even more impressive. McKelvin seemingly has no where to go. 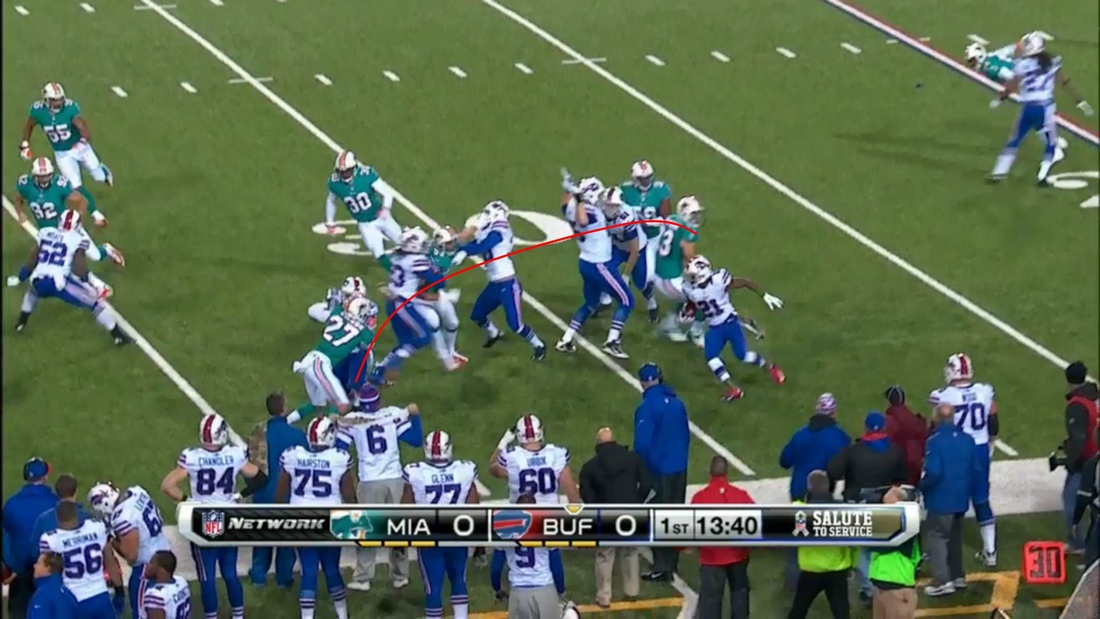 However, McKelvin is able to spot the one crease he has, to Wilson's left. Wilson and Chris Clemons (30) should both have a play on McKelvin as he moves into that crease. 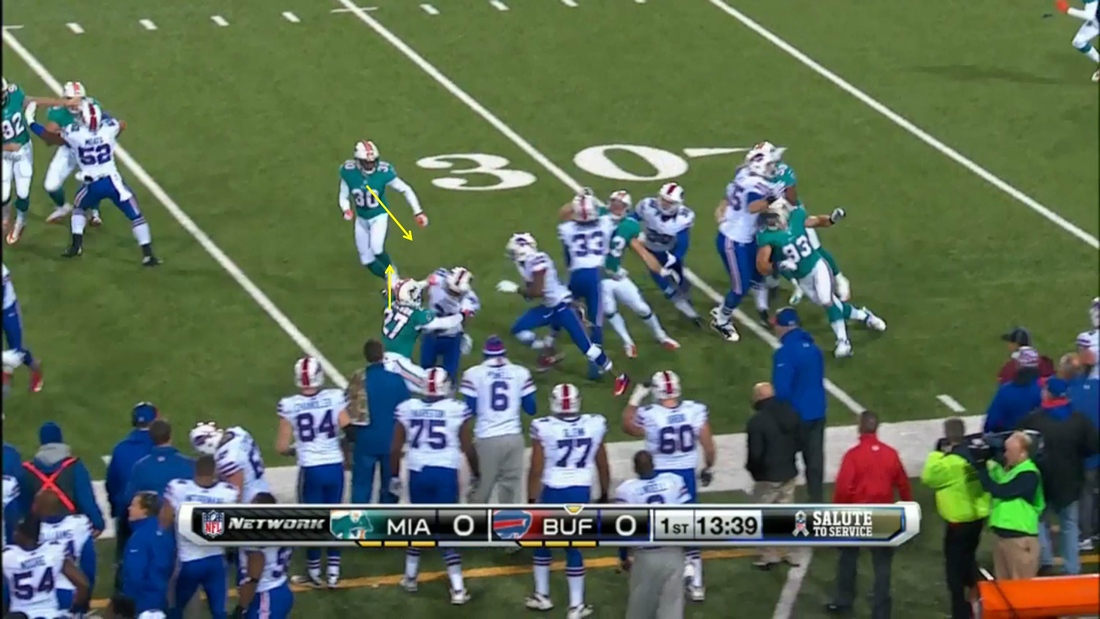 McKelvin is able to run right between Clemons and Wilson, and from there, the only player who will really have a chance at him is Fields. 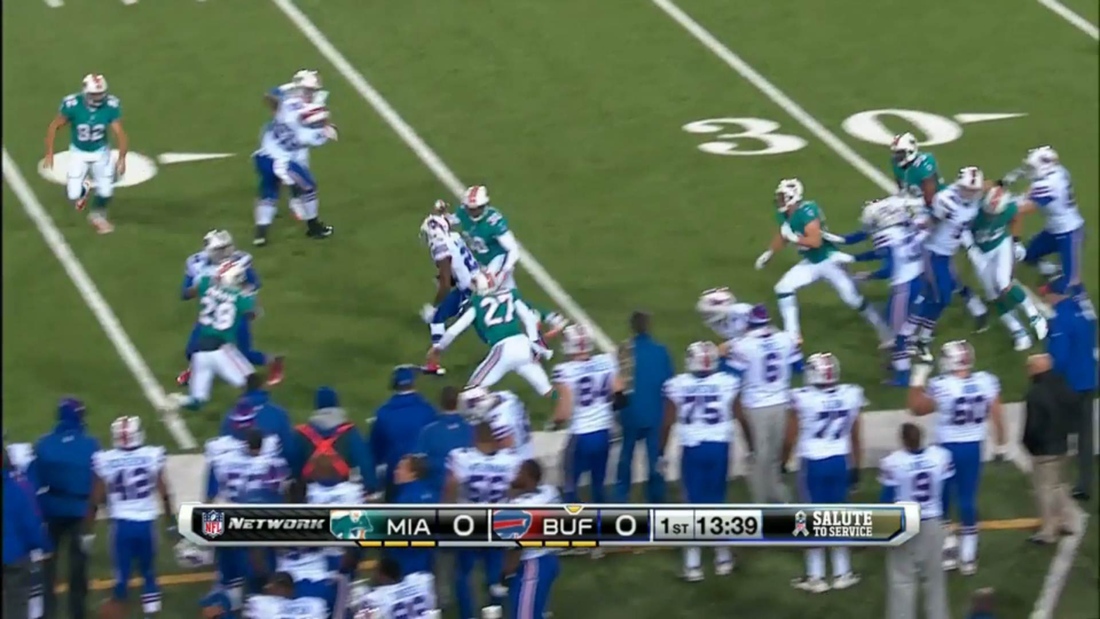 But the Bills do a great job of blocking Fields. 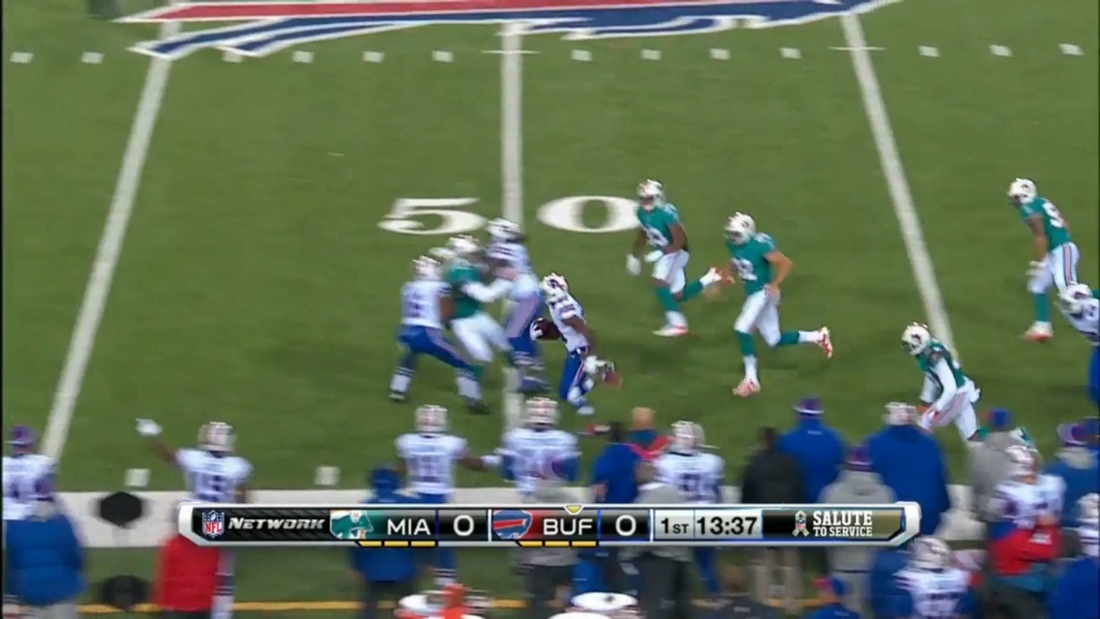 And from there, it's just a matter of McKelvin getting to the end zone. 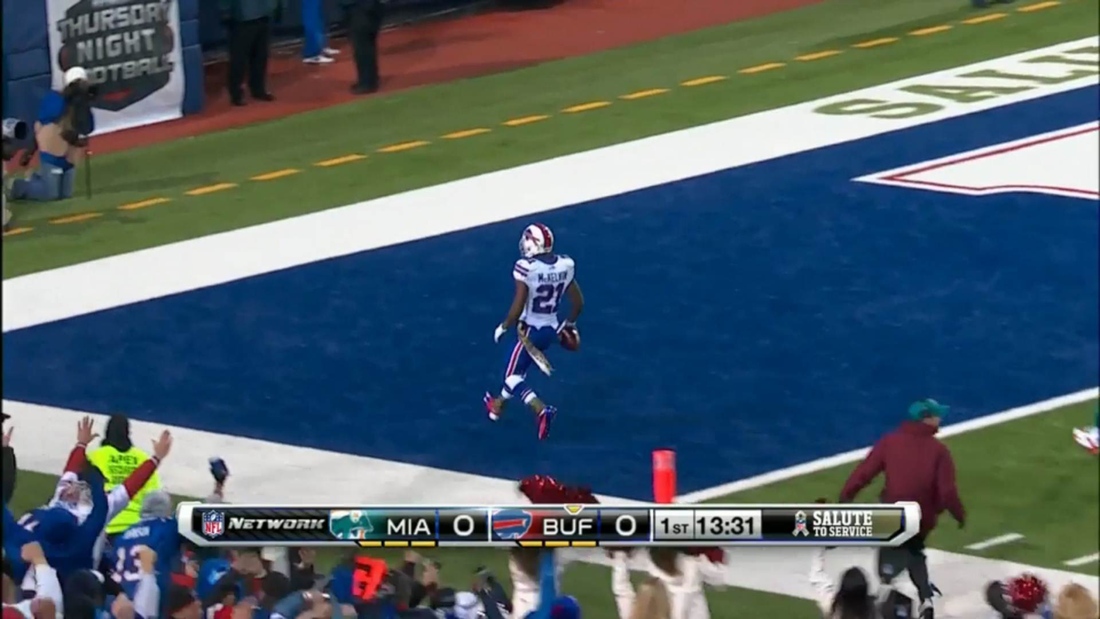 The Miami special teams have been impressive during the season, blocking kicks and covering well through out the year. However, in this case, two players simply being unable to complete the play opened up the field for a 79 yard punt return. Luckily for Miami, a short while later, Marcus Thigpen would return a kickoff for a touchdown, evening out the special teams scoreline - although the bend-don't-break defense would allow too many field goals as the Bills come away with the 19-14 victory.