Titans at Dolphins: Where to Watch, How to Watch, and What to Watch

The Miami Dolphins are looking to climb back onto the winning side of .500 today as they host the Tennessee Titans. Tennessee, meanwhile, should see their starting quarterback, Jake Locker, return to the field after missing time due to a non-throwing shoulder injury. Here's all the television and radio information, plus more to get you ready for the game.

Share All sharing options for: Titans at Dolphins: Where to Watch, How to Watch, and What to Watch

The Miami Dolphins have a chance to climb back to a winning record today, which would mark the second time this year that the team moved to the positive side of .500. Standing between them and that positive record are the Tennessee Titans, who will be welcoming back their second year quarterback, Jake Locker. How can you watch the game? Of course, we have all the information you need.

According to The506.com, today's game will be seen throughout Tennessee, with some bleed over into Virginia, Kentucky, Illinois, Missouri, Arkansas, Mississippi, Alabama, and Georgia. As for Florida, I think this is the first time I've been able to say this all season - if you live in Florida, you will get the Miami Dolphins game! The game will extend to the Mobile and Dothan, Alabama markets, as well as the Albany, Georgia area as well. 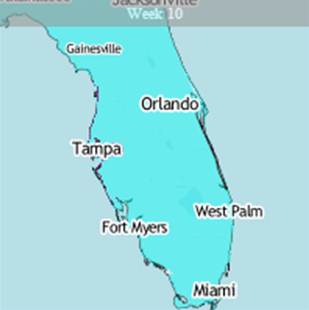 Obviously, CBS is going to be the place to watch this week in the markets, but every where else in the country, DirectTV's NFL Sunday Ticket package will air the game on channel 709.

1. Miami Rushing Offense vs. Tennessee Defense - The Titans are the 30th ranked rush defense in the league. The Dolphins have struggled to get their running game going the past few weeks, and have relied on Ryan Tannehill's right arm. Will Reggie Bush and Daniel Thomas be able to find space this week?

2. Miami Pass Rush - The Dolphins struggled last week to effectively put pressure on Andrew Luck. They would be able to get into the backfield, then watch as Luck simply moved away from them. Jake Locker will be able to do exactly the same thing. The Dolphins have to get to him and get him on the ground, and they have to make sure they keep containment, or Locker will hurt them with his legs.

3. Sun Life Stadium Atmosphere - The Dolphins are seeing ticket sales increase lately, with the team able to sell this game to the 85% threshold required to keep the game on TV, and did not need a league extension to the deadline, nor did owner Stephen Ross have to buy the tickets. (Apparently, I was wrong in that statement. The team in fact did buy some of the tickets). In fact, the team has already announced that the Week 13 game against the New England Patriots is already sold out (the Week 12 game against the Seattle Seahawks has not sold out yet). Will the uptick in ticket sales equate to a livelier Sun Life Stadium and a bigger home field advantage for the Dolphins? Hopefully this game will show us that it will.

"On behalf of Steve Ross and the entire Miami Dolphins Organization would like to honor and thank all the brave men and women who currently serve and those that have served our country. We join the NFL and Dolphin fans in saluting all our branches of the military and veterans everywhere who have sacrificed so much to protect this great country." - Miami Dolphins CEO Mike Dee on the Dolphins' Salute to Military and Veterans, 11/10/12

"I didn't have a lot of preconceived notions, I honestly didn't. Since April 10th when these guys reported for the offseason program, as I've stated before, I've liked the way they've approached their jobs. I like the degree of professionalism they exhibit, and I think we have a chance to be a good football team. I still believe that. I didn't sit around and say it would be great to be 4-4 at the halfway point in the season. I didn't say it would be great to be 6-2 or 2-6 either. The best that I can, I like to live in the moment. What's that saying? Plan for tomorrow, live for today, and forget about yesterday or something? I'm not real philosophical. Something like that." - Miami Dolphins Head Coach Joe Philbin on if the team is where he thought it would be midway through the season, 11/9/12

"I knew he'd be confident, I knew he'd feel good. We knew all those things going in. He handled the game plan well, which again, we thought he would. He moved around well, his reactions were good, just things you look for to see if someone is limited in any way where we felt that he wouldn't be able to play at the level he needs to physically. We didn't see any of that. Like I said yesterday, we had some very competitive practices with pads on against the defense, ones-on-ones with two-minute and pass periods, have-to-win situations. He handled it well. He didn't look like he was worried in any way about his health or shied away from anything, and was stepping into his throws. So all the things you want to see, I think the best you can in practice, we saw it. There is no reason to think he can't play at a high level on Sunday." - Tennessee Titans Had Coach Mike Munchak on what he wanted to see out of Jake Locker this week, 11/9/12