Dolphins at Bengals: Where to Watch, How to Watch and What to Watch

Share All sharing options for: Dolphins at Bengals: Where to Watch, How to Watch and What to Watch

After losing two straight overtime contests, the Miami Dolphins look to bounce back with a road trip to face the Cincinnati Bengals later today. Miami will have their hands full today with a potent offensive attack led by second year quarterback Andy Dalton. How can you watch the game? Of course, we have all the information you need. 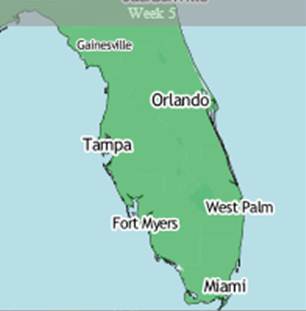 The television coverage for this game is pretty simple to explain. If you live in the Cincinnati area (basically, south of the Cleveland area to just north of the Kentucky/Tennessee border, and from the southern Illinois through the western half of West Virginia) you will get the game. As for Florida, the entire state gets the Dolphins this week, incluing the Mobile, Alabama market, southern Alabama around Dothan, and the southern portion of Georgia, including Albany but not quite up to Savannah.

Obviously, CBS is going to be the place to watch this week in the markets, but, outside of the light blue area in Florida, or every where else in the country, DirectTV's NFL Sunday Ticket package will air the game on channel 707.

For our international fans, we can help you with a little bit of information about the games you will get this week. In Canada, at 1:00pm Eastern, CTV will air the Eagles at Steelers contest, except in Ottawa, Manitoba, Alberta, and British Columbia, which will get the Packers at Colts game. TSN2 will be showing the Browns at Giants game at 1:00pm Eastern, while RDS will have the Falcons at Redskins. In the late time slot (4:25pm Eastern), CityTV will air the Bills at 49ers, and RDS will show the Broncos at Patriots.

In the UK, SkySports will air the Eagles at Steelers contest at 18:00 Western European Time. They will then transition to the Broncos at Patriots at 21:25 WET. The Sunday Night Football game, featuring the Chargers at Saints, will air at 01:20 WET Monday morning on Channel 4.

In Australia, the early games will air at 4:00am Monday, with Fox Sports showing the Packers at Colts and One HD airing in the Eagles at Steelers. The late games, at 7:15 am Monday, will have the Broncos at Patriots on One HD. The Sunday Night game, Chargers at Saints, will air at 11:20 am Monday on ESPN Australia

And, for our AFN viewers, AFN Prime Atlantic will be airing the Falcons at Redskins game, while AFN Sports has the Eagles at Steelers in the early time slot (7:00pm CET, 8:00pm in Iraq/Kuwait, 9:30pm in Afghanistan, 2:00am Monday Japan/Korea). In the late slot, AFN Prime Atlantic will cover the Bills at 49ers and AFN Sports will have the Broncos at Patriots (10:00pm CET, 11:00pm in Iraq/Kuwait, 12:30am Monday in Afghanistan, 5:00am Monday in Japan/Korea) . AFN Sports will also air the Sunday Night Football Chargers at Saints game.

1. Miami Offensive Line vs. Cincinnati Defensive Line - The Bengals are the top team in the AFC with 16 sacks already this season, one behind the league leading Arizona Cardinals. The Dolphins allowed four of those Cardinals sacks last week. They are going to have to do better against the Bengals this week. Left tackle Jake Long has struggled in the first quarter of this season, and rookie right tackle Jonathan Martin has looked like a rookie at times, although he has only allowed one sack on the year. If quarterback Ryan Tannehill is to have any sort of success, he has to have time to throw the ball, meaning the offensive line for Miami has to win this battle.

2. Dolphins Secondary vs. Bengals Receivers - It seems like this battle is on the What to Watch list each week. This week it takes on added pressure for the Dolphins, as starting cornerback Richard Marshall has been ruled out of the game. Third year corner Nolan Carroll looks to get his fifth career start at cornerback, playing opposite Sean Smith today. Look for Jimmy Wilson to continue to play cornerback this week, despite the Miami coaches moving him to safety in the offseason. The Dolphins will face the eighth ranked passing offense on the year this week, with receiving threats all over the place, led by second year receiver A.J. Green. Along with Green, receiver Armon Binns and Andrew Hawkins and tight end Jermaine Gresham could all cause problems for the Dolphins.

3. Reggie Bush - Last week, running back Reggie Bush was clearly hampered by the knee injury he suffered two weeks ago against the New York Jets. He said earlier this week that he is feeling much better, whereas last week he tried to play despite the pain. The Miami offense is built to run through Bush, and the team is going to have to get him involved in the game, and involved early, to put the pressure on the Bengals' defense.

"Everything I think. I think all of the above. We're coming off a West Coast trip. Coming off two tough losses. We're going to play a very good team on the road again. So we've got to strap it up. We've got to get to work. We've got to put together, our staff, I told our staff, we need to have a good, solid game plan against these guys. We've got to get our guys to play hard and to believe in themselves and play our tails off." - Miami Head Coach Joe Philbin on if this week is a challenge because of the Arizona loss or because of the Cincinnati Bengals, 10/1/12

"There are similarities to the things that we've done, and that Kevin is doing there. They have good players. They're very effective, and they're doing a good job." - Cincinnati Bengals Head Coach Marvin Lewis on Miami Defensive Coordinator Kevin Coyle running a defensive scheme similar to the Bengals (Coyle previously served as the Cincinnati defensive backs coach) and if watching Miami film is like watching the Bengals defense, 10/3/12

"Yeah. They're really good. They're going to be some of the best guys that we've gone against so far, and it's how we handle it. We feel we've got the guys who can match up. We've just got to go out and execute. That's what it comes down to." - Cincinnati Bengals Quarterback Andy Dalton on Miami's front seven, 10/3/12