Dolphins at Jets: Where to Watch, How to Watch and What to Watch

Share All sharing options for: Dolphins at Jets: Where to Watch, How to Watch and What to Watch

The Miami Dolphins return to action today following their bye week. And, who better to face than the New York Jets. Obviously, the two teams, and the two fan bases, hate each other, but this week has a little more riding on it. The Dolphins, with a win will at worst stay a half game behind the New England Patriots for the division lead, and could even come out of the week with the top spot in the AFC East. The Jets are heading into their bye this week, with a 4-4 record a lot better than a 3-5. How can you watch the game? Of course, we have all the information you need. 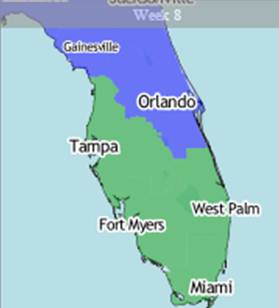 This week's coverage area is strange. It really is random where around the country you can catch the Dolphins this weekend. The game will be seen in Texas around the Odessa market out west, but not in El Paso, as well as the Bryan/College Station and Waco markets in Central Texas (meaning I will get the game on local market! - Thanks Ryan Tannehill for going to Texas A&M!), Continuing our move from west to east, the Jackson, Missisissippi market will pick up the Dolphins at Jets, and, of course, the majority of New York, the northern half of New Jersey, and most of eastern Pennsylvania (save the Philadelphia market), will get the AFC East showdown. As for Florida, you can see the green area on the map to the right. Basically, Central Florida south will get the game, except for the actual Orlando market. In northern Florida, the game will be seen from the Eastern/Central Time Zone boundary west to Pensacola.

Obviously, CBS is going to be the place to watch this week in the markets, but, outside of the green portions of Florida, or every where else in the country, DirectTV's NFL Sunday Ticket package will air the game on channel 710.

For our international fans, we can help you with a little bit of information about the games you will get this week. I'm changing up the format a little to make it easier to read (I hope).

United Kingdom (Daylight Savings Time ended in the UK this weekend - make sure you adjust accordingly):

1. Miami Dolphins vs New York Jets - Yes, I realize that is the game, but I'm not talking about the game. I'm talking about the game within the game. The AFC East division rivals game. The hatred game. The "hot sauce" game. The karma game. That game. The Dolphins and Jets hate each other. The players hate each other. The fans hate each other. This is an awesome game within a game. Add in the uptick in the normal trash talking, and this game has even more of that hatred bubbling out. Will the Jets "headhunt?" Will the Dolphins get retaliation for the Jets "targeting" Reggie Bush last week? There's so much drama right beneath the surface in this game, and it will be great to see how long until it boils over onto the field.

2. Ryan Tannehill and the Miami Wide Receivers - Tannehill has six NFL games under his belt now, and has gone through the bye week. As fans, we are all expecting to see continued development of the rookie quarterback. That development may only come if the chemistry between Tannehill and his receivers continues to build. We could see the Miami debut of Jabar Gaffney today, which should help.

3. Tony Sparano vs. the Dolphins - As often as former Miami head coach turned Jets offensive coordinator Tony Sparano said all the right things about the teams' Week 3 contest being just another game, it was clear Sparano wanted to stick it to him former employers, and he celebrated the Jets in in overtime like he had just won the Super Bowl. This week, in New York, Sparano is going to want to prove that the Week 3 win was not a fluke - he's going to want to shove the ball down the Dolphins' throat. Watch the Jets offense, and their offensive coordinator, to break out some new things (Tim Tebow?) just so Sparano can prove his worth.

"The game I saw on September 23 was a hard fought game by both teams. I didn't think it was a dirty game. I think players played hard. I suspect that will be what happens when the game comes around this Sunday. I'm more concerned with our players, not others. Certainly, it's a free country - they can say whatever they want." - Miami Dolphins Head Coach Joe Philbin on Jets trash talking, 10/25/12

"This game, to me, could really be a turning point for either team. For the Jets to be able to sweep one of your divisional opponents is crucial. For the Dolphins, it's about getting over .500."- Former Miami Dolphins and New York Jets quarterback Chad Pennington on the importance of this week's game, 10/25/12

"I don't even want to talk about him. He's a joke. I have to be on punt block to say something to him. He's not even going to play enough plays to touch Reggie." - Miami Dolphins Center Mike Pouncey, speaking about Jets linebacker Aaron Maybin's comments saying New York will try to knock Reggie Bush out of Sunday's game, 10/25/12