It's no secret: the Miami Dolphins and New York Jets don't like each other. There's something extra in the air when these two teams meet, and this week will mark the second time they clash this season. Inevitably, when the game gets close, the trash talking gets louder. Except now, Laron Landry has decided to take it to a new level - and he's pretty dumb for it.

The Miami Dolphins and New York Jets meet for the second half of their annual home-and-home series. And, it should come as no surprise that the trash talking has begun now that the game is getting close. Of course, LaRon Landry may want to learn the difference between trash talk and stupid statements.

The Jets' safety was the guy who took a shot at Miami running back Reggie Bush's knee during their first matchup five weeks ago. Bush ended up missing the entire second half of that game with a bruise to the knee, and has been slowed by the injury over the team's last three games.

Before the game, New York head coach Rex Ryan had talked about wanting to put some "hot sauce" on Bush. After the game, Jets linebacker Calvin Pace decided to tell the media, "I guess he was doing his thing for a quarter or two. We had to put him on out. We didn't see him again."

Of course, both Ryan and Johnson said later that their comments were misunderstood, and there was no targeting or "any kind of bounty system" leading to the injury on Bush.

After their last meeting, Bush simply said that the season ending injury to Jets' cornerback Darrelle Revis was karma coming back and biting the Jets for all of the rhetoric.

All of that back and forth from the team's Week 3 contest served as a jumping off point yesterday. Ryan told the New York media yesterday, "I apologized for my [hot sauce] comments. I expect [Bush] to do the same."

Bush said, after hearing of Ryan's comments, "I don't believe that at all. They're the ones that started it. If there was ever any retaliation, it would come from us. But with this team, the caliber of guys and the character of guys we have on this team, we play with respect for the game."

Ryan, who spoke to the Miami media after his comments to his hometown reporters, backed off his request for an apology from Bush, saying he didn't really need one.

And then Landry decided he needed to speak up. Jets beat writer Manish Mehta tweeted out the statements Landry made about Bush:

Landry on Bush: "Just watch the way he runs on Sunday. I'm not going to overall it or make it a story" #nyj

So @mrlandry30 is threatening @reggiebush & using the word " head hunting " where is the @nflcommish when you needed him. #Bounty

Landry apparently did not enjoy being called out about his need to target players' heads:

@robi2184 @reggiebush @nflcommish oops sorry for the terminology!!! Flying around you weak ass...maybe they should play water polo

Of course, Landry deleted the tweet after writing it, but Robi grabbed the screen shot of it as well: 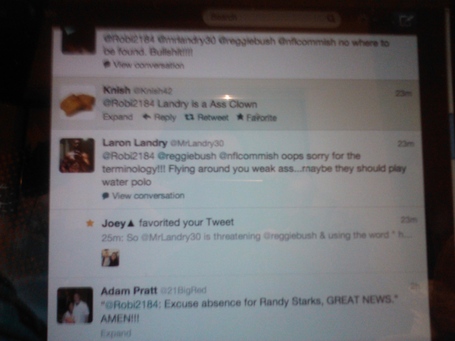 Landry clearly took the trash talking to a new level - and a level nearing Commissioner Roger Goodell attention levels. Of course, this is all just words, and really should not cause any action from the NFL based solely on these words; but it sure will cause attention to every move Landry makes on the field to come under a microscope.

Plus, trying to intimidate a player like Bush, who takes pride in his preparation and is one of the hardest working players in the league, is probably not a great move. Former Dolphins beat writer turned NFL.com reporter Jeff Darlington had the same thought:

If Landry hoped to scare Bush with last game's hit, I'd guess he's only going to now motivate Bush with his words. Should've stayed quiet.

I actually agree w/ Landry: His hard hits might make Bush think twice. But now he just sparked reason for Bush to deliberately overcome it.