A look into the life of BSerious72: Photos with Miami Dolphins

Share All sharing options for: A look into the life of BSerious72: Photos with Miami Dolphins

I've wanted to do this post for awhile now and thought the bye week blues would be a good time to share. For all of those who don't know me outside of BSerious72, my name is Brian and I am a 25 year old travelling Engineer from South FL. Since birth I've been dressed in Dolphins gear and have been a die hard fan since I learned to master my motor skills and stopped shitting my pants ( a few years ago lol). Anyways, growing up I've been lucky to live in the area and go to games every Sunday with my dad. I've been to about 30 Dolphin games or so, including 3 in other cities (Tampa Bay, Buffalo & Atlanta).

Below are a few cool Dolphin pics, stories and memories that I hope you enjoy. I wanted to create this post to share them, but also encourage you to share your favorite Dolphin stories or all the players you have met. I'm not as popular as Ohio, but I have had some pretty sweet stories. 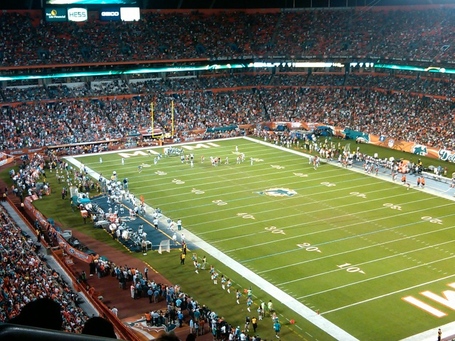 It also starts with my Brandon Marshall man-crush. I had a pleasure of watching this guy play every Saturday at my college, UCF. Well, he went off to Denver his rookie year and I was out with a few friends at a local UCF bar and who's there... BMarsh! Only a decent amount of people actually recognized him but I HAD to say "What's Up". I went up to him and got a few photos and said "Bro, Miami needs a receiver you should come to South FL.". So, you're welcome Miami fans, or I'm sorry... however you look at it! 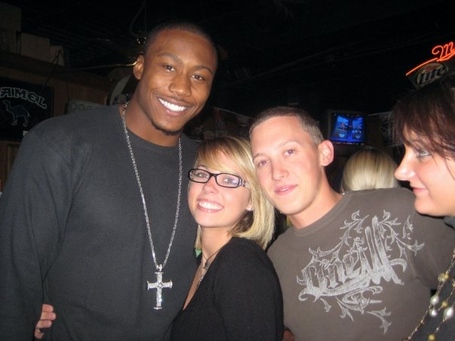 Road trip to Atlanta for the start of the 2008 season. Sweet stadium, nice trip but we got smoked Week 1 by the Falcons. Can't believe we ended up going 11-5 this year, if only we broke out the wildcat THIS game! This was the game of Greg Camarillo's butt catch, if anyone remembers. 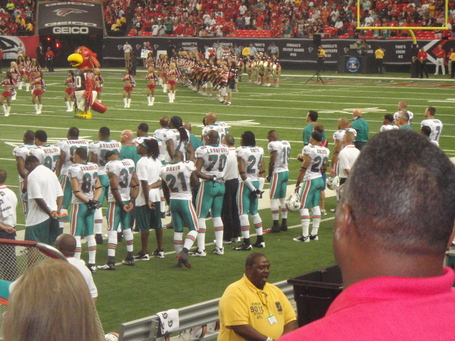 So back in South FL, two years back, I'm on my computer and Brandon Marshall pulls a Chad Johnson and tweets "First 50 people to go to Chili's gets dinner on me". Well, I wasn't doing anything so I called all my friends to see if they wanted to ride. They all were busy, so screw it, I went solo. Got to Chili's and Marshall had pretty much reserved the entire Bar and Lounge area. I sat at the bar and Marshall came from table to table and talked with everyone and signed stuff and took pictures. Before he left he visited EVERY single person. Told him about meeting him at UCF and reeling him to Miami!

All in all, I see why Marshall is blasted but I've met him twice and he is one of the nicest soft-spoken athletes I have ever met. My uncle said he came into his dealership with his wife (who apparently was drop dead gorgeous) to look at a Mercedes and said he was the nicest guy and even signed autographs for all the workers. So figured I'd share these stories for those who have a personal vendetta for the guy! BMarsh you are still the MAN, but i hope you ball out tonight for my fantasy squad or I take back all the nice words. 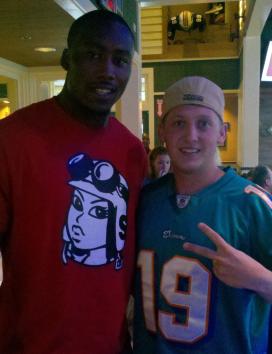 This was the Tennessee Titans game in 2010 which ended up being Chad Pennington's last game. This was Randy Moss's first game as a Titan and Miami held him without a catch including a BONE-JARRING hit by Rashad Jones that caused a fumble. Bye bye Chad, little did I know I was one of the last to see him on the field. CP10 4EVA. 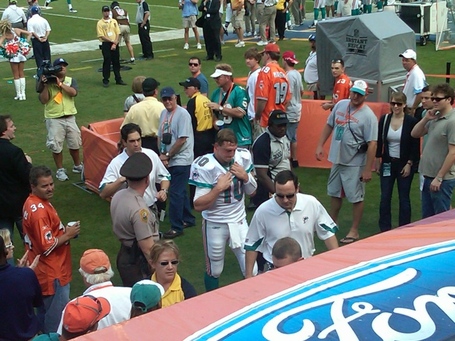 A few plays later Henne goes out. FML. Oh well, enter Tyler Thigpen who ended up winning the game for us dispite losing our top 2 QB's! I loved getting Thiggy Wit It. 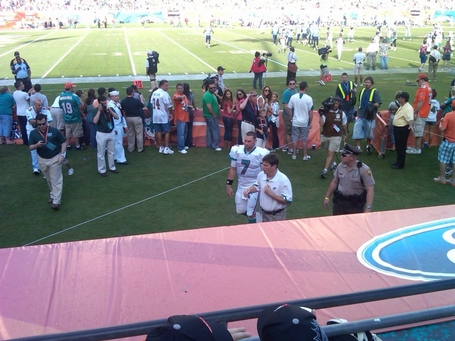 2011 Draft party at Sun Life stadium. Ended up in VIP with a few players to watch Miami draft Mike Pouncey. Overwhelming response was boos lol. Anybody recognize this famous Dolphin!? 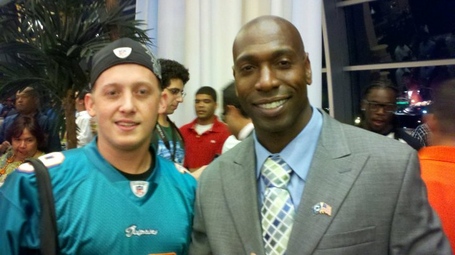 Also got to hang out with possibly my favorite Dolphin. Bess was cool as hell and chatted with him for awhile. He is one of the few NFL players I'm taller than, but I'm pretty sure he can still take me lol 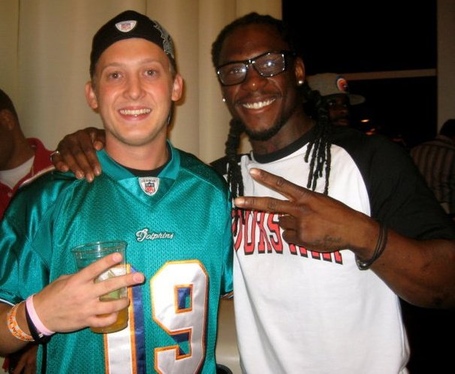 Also, most of you here are familiar with my story of OJ McDuffie and his perfect game. If this is the first time you are hearing about this I really encourage you to click the link below and read the post I created about this story. It is one of the cooler ones you will hear and it ended up making CBS Sports and I was featured on ESPN Sportsnation. Never thought I'd make ESPN before!

The rest of my photos take place at Miami's Touchdown Club. The TD club is a business gathering that takes place every Tuesday. It has moved from Shula's in Miami, to the stadium club level and now takes place in Bokamper's in Miramar. It's hosted by Joe Rose, Kim Bokamper and was hosted by Jim Mandich as well, before his passing. My father is a member for business purposes and usually lets me tag along when I'm home. It's broadcasted on the radio and additionally, a few Dolphin players usually make it to each one and give interviews while we eat and watch. All the proceeds benefit the Mandich foundation, so I'm sure Griffin will agree when i say "FUCK CANCER"; the organization has raised tens of thousands of dollars every year! For all Fin fans who do business in South Florida I encourage you to check it out!

Here are a handful of guys I've met at the TD Club. Alot of these pics also include my pops.

The Robot. Programmed him to Smile. SUCCESS!!! 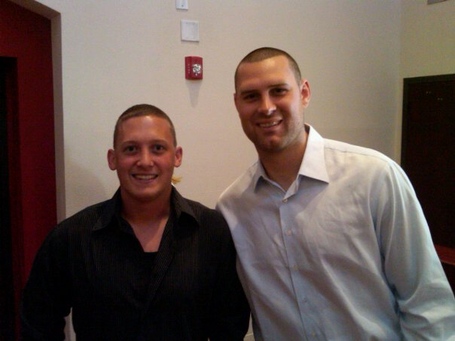 Met Ike Alama Francis the week after we lost to Pittsburgh in that controversial BS game. I was there. Ike recovered the football in the endzone and the officials still gave the possession to the Steelers. and when he was asked about it here he said "No doubt. That ball was mine". Thanks again Steratore, i hope you get hemorrhoids. 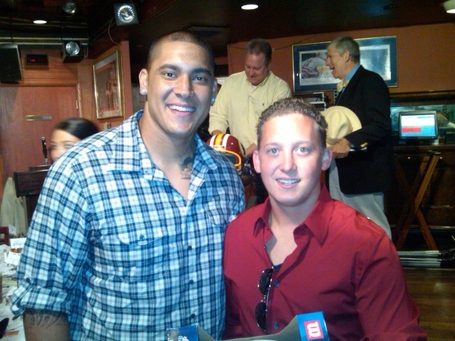 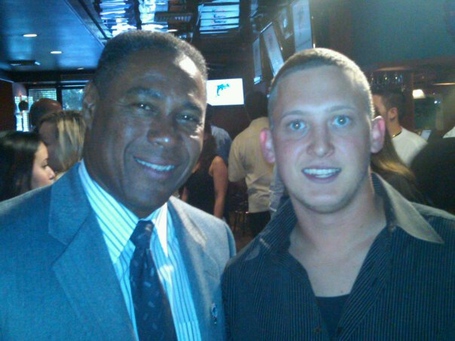 Hard hitting safety, Rashad Jones. Talked to him about his college teammate at Georgia that went to my high school. 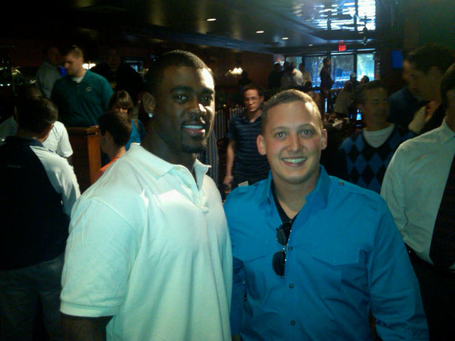 Vontae Davis my dude! Goofiest, funniest guy ever. He sure is sucking this year but I miss him lol 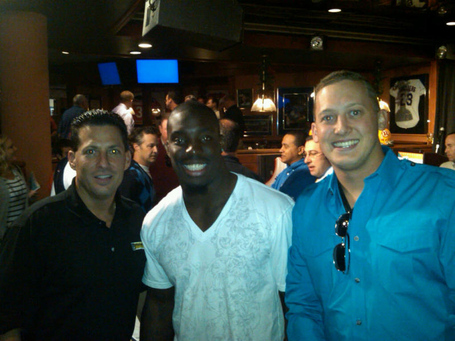 Other corner, Sean Smith who I met this year. Me and Sean are born on the same exact day and are the same age. I told him this when we met. Dude's a beast this year. 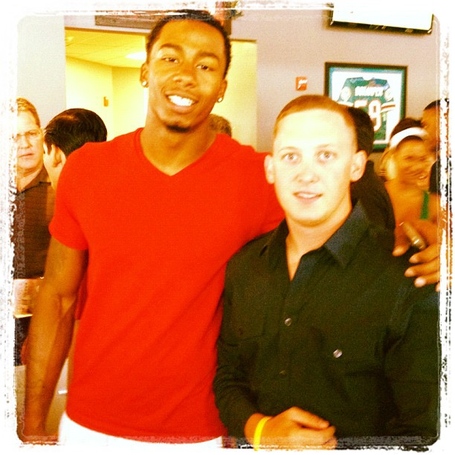 Channing Crowder. This guy is all over South FL and a few of my buddies have run into him. All personality, guy is absolutely hilarious. Could use a shave here though, looks like the Geico caveman lol 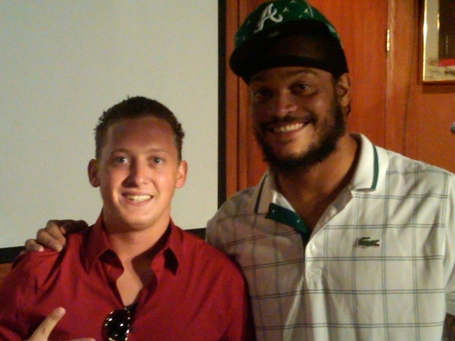 Jake Long, a MONSTER of a human being. Puts my 5'9 size in prospective, pretty sure he could rip off my limbs if he wanted to. 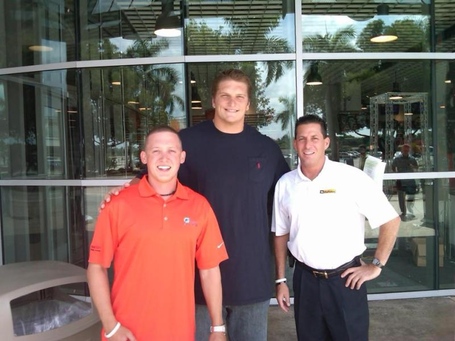 Dan the Man! In a bit of a rush but who cares we HAD to get a pic. Met Marino a few times briefly before. 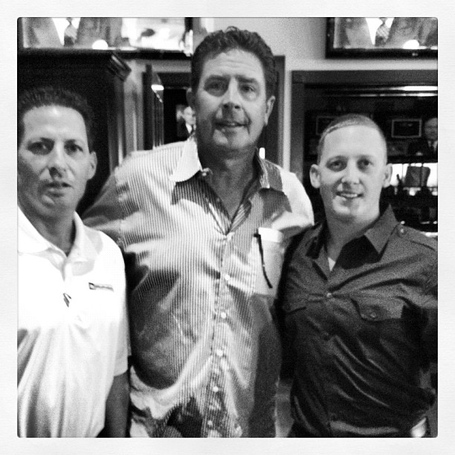 Only one word to describe this pic: PERFECT! Shula, the ultimate OG. 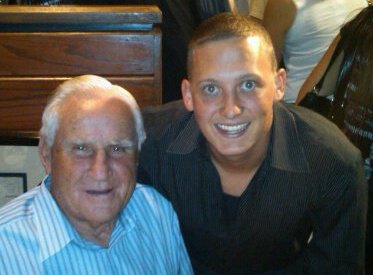 That's all I got for now, I'm sure a few other players or stories will come to me over time but I wanted to share before we get locked and loaded for the Jets game!
Please feel free to share your Dolphins stories and photos below, I want this post to be a gathering of everyone's
"Miami SWAG" where people can tell their greatest moments! So sound off below and I hope you enjoyed this post!
Go Fins and almost more importantly.... F the Jets!!!
-B