Last weekend, the Miami Dolphins beat the St. Louis Rams 17-14. The Dolphins were clearly struggling in the game, but had only given up two early field goals before a 29 yard touchdown pass from Ryan Tannehill to Marlon Moore. That pass deserves a second look.

Share All sharing options for: A Phinsider Breakdown of the Miami Dolphins' Ryan Tannehill Touchdown Pass to Marlon Moore

The Miami Dolphins beat the St. Louis Rams last Sunday to climb back to 3&3 on the season. Despite being outplayed, the Dolphins were able to climb back into the game when they scored on a 29 yard touchdown pass in the second quarter. Up until then, Miami was not having any sort of success on offense, but the long pass from rookie quarterback Ryan Tannehill to a wide receiver, Marlon Moore, who came into the game without a single reception on the season, put Miami into the lead - a lead they would not give back.

The play came with 5:35 left in the second period. The Dolphins were facing second and five at the Rams' 29-yard line. As Miami came to the line, Tannehill recognized the coming blitz from the Rams, who would send seven rushers on the play. Tannehill audibled the play, adjusting the protection to make sure everyone was picked up. During the pre-snap setup, Rams cornerback Janoris Jenkins, who is covering Moore in man-coverage, had his eyes in the backfield watching Tannehill (red arrow). 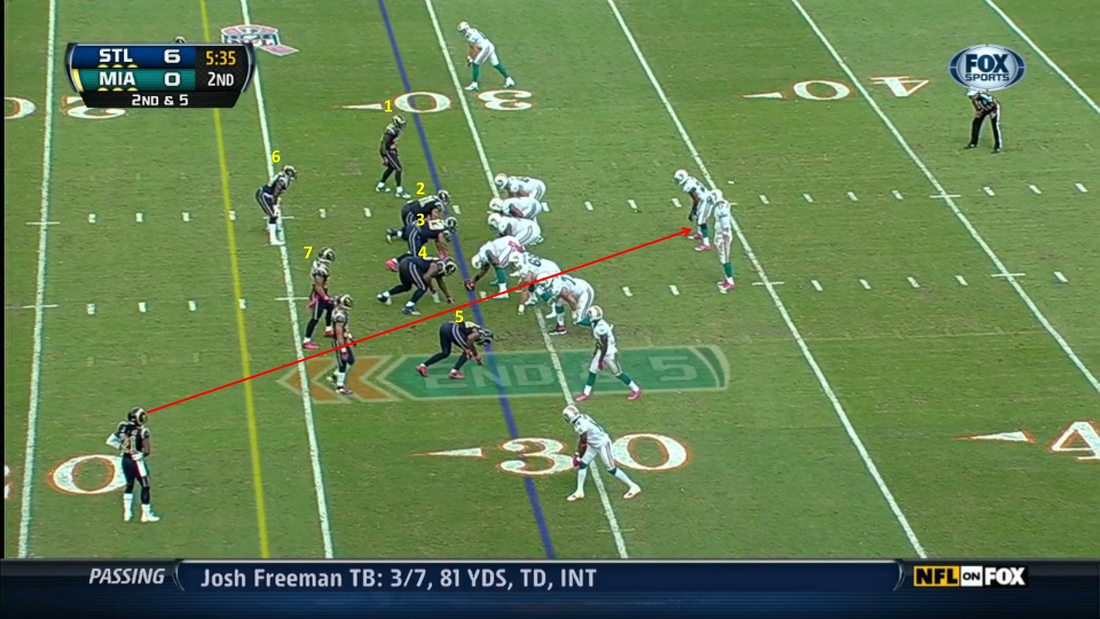 Just before the snap, we get a look at the entire field. Brian Hartline, on the top of the picture, and Moore on the bottom are each going to run double moves, with an out route turning into a fly route. Davone Bess, lined up in the slot next to Moore, is going to run a crossing route. Circle in light blue is running back Reggie Bush and safety Quintin Mikell, who is one of the blitzing defenders on the play. Bush is going to pick up Mikell, getting just enough of a block onto the safety to keep him from disrupting the pass. Meanwhile, that red arrow is still there as Jenkins stares at Tannehill. 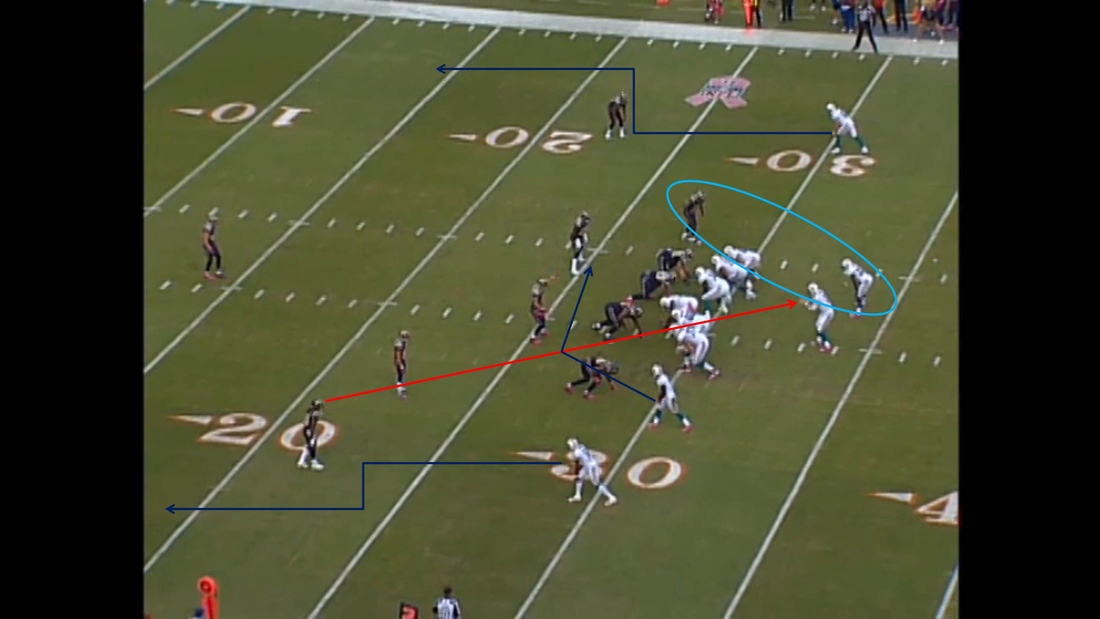 At the snap, that red arrow is still there. 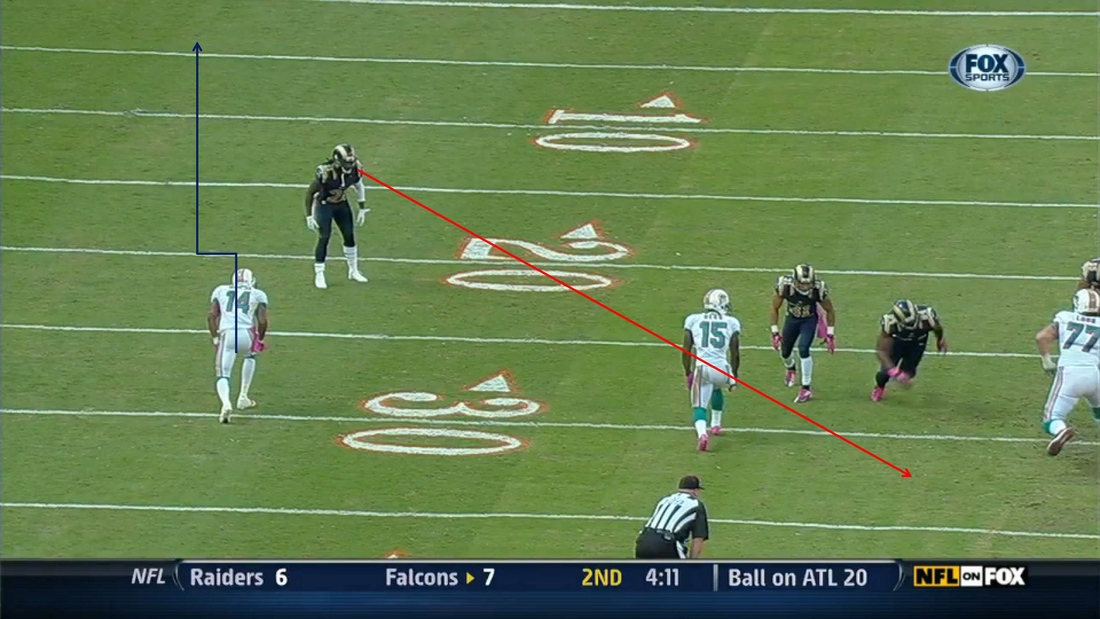 Meanwhile, Tannehill is starting to drop back, and is looking to the right at Hartline's route. Bush is lining up for his block on the fast attacking Mikell, while the offensive line is successfully picking up the other six rushers. On the outside, Moore is a yard beyond the line of scrimmage, but that red arrow is still there, and Jenkins has not moved his feet yet. 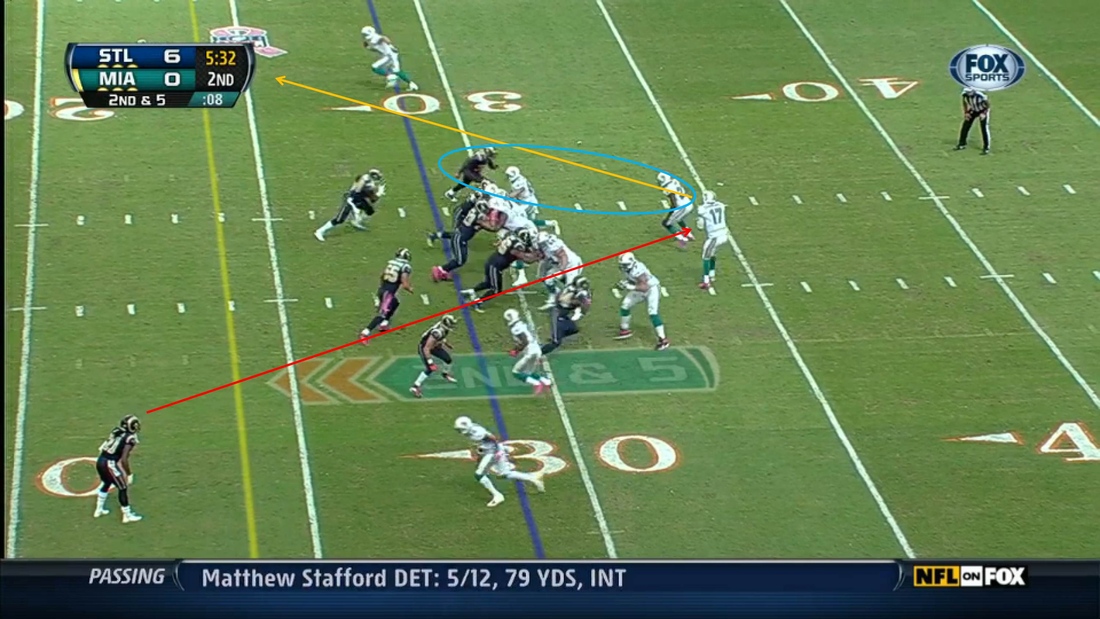 As the play develops another step, Tannehill is now turning his attention from looking at Hartline to looking at the deep safety, Craig Dahl, freezing him in place. Bush is set nicely to pick up the quickly advancing Mikell. 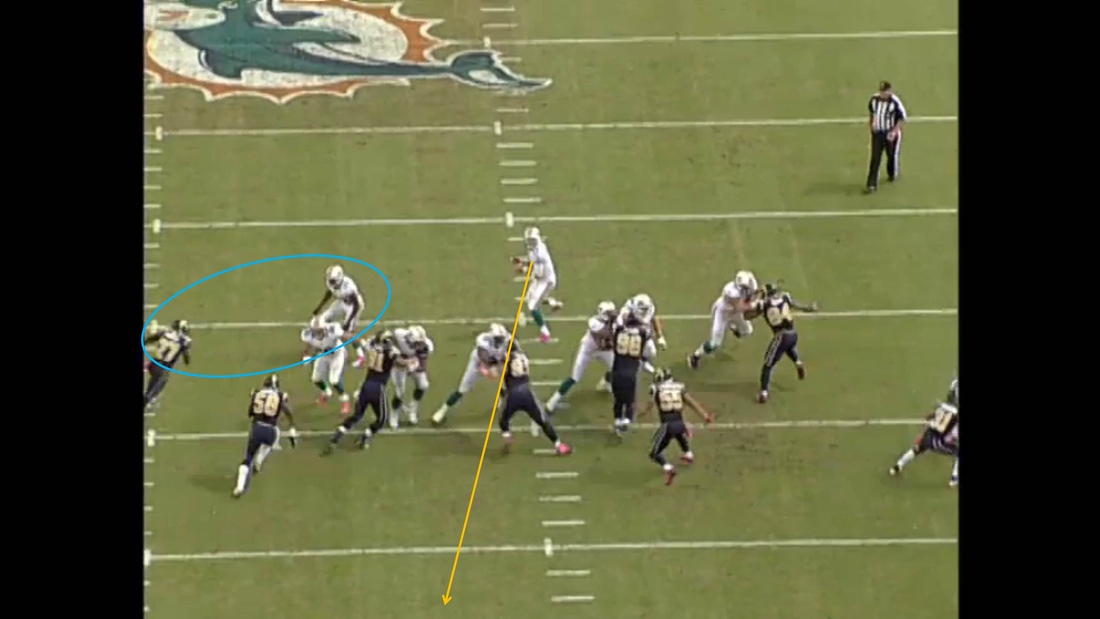 Moore is now about four yards down the field, and that red arrow is still sitting there, with Jenkins clearly flat footed and not moving. He is memorized by Tannehill, and he is about to regret it. Bush is about to engage Mikell to Tannehill's right. 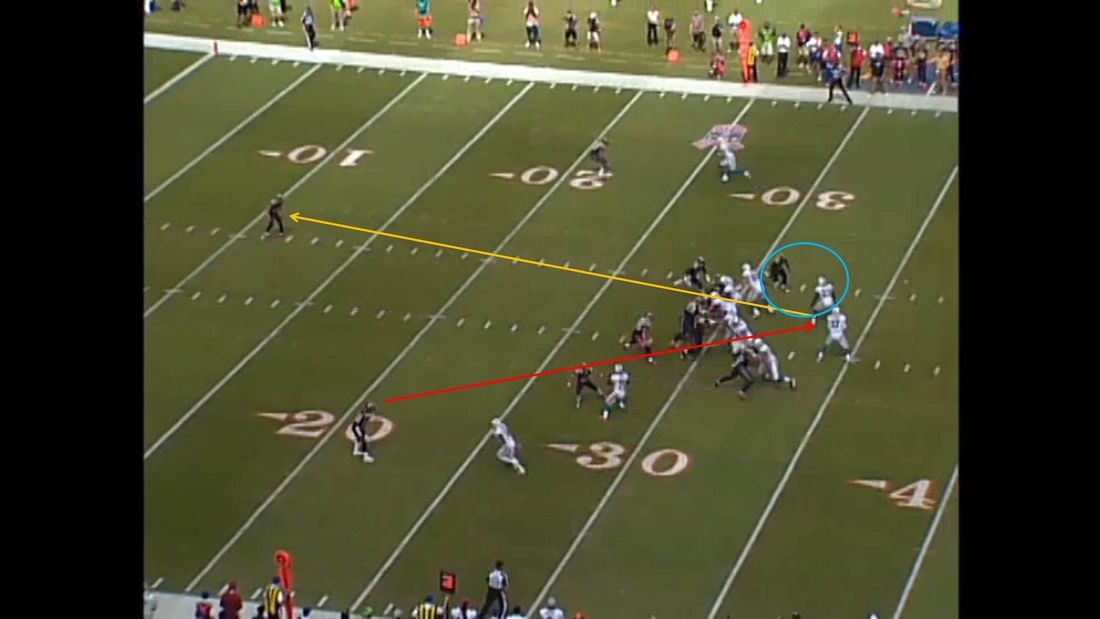 Four more yards down the field for Moore, who has now reached Jenkins. Yet, the cornerback still has the red arrow stuck to him, even as Moore simply runs around him. 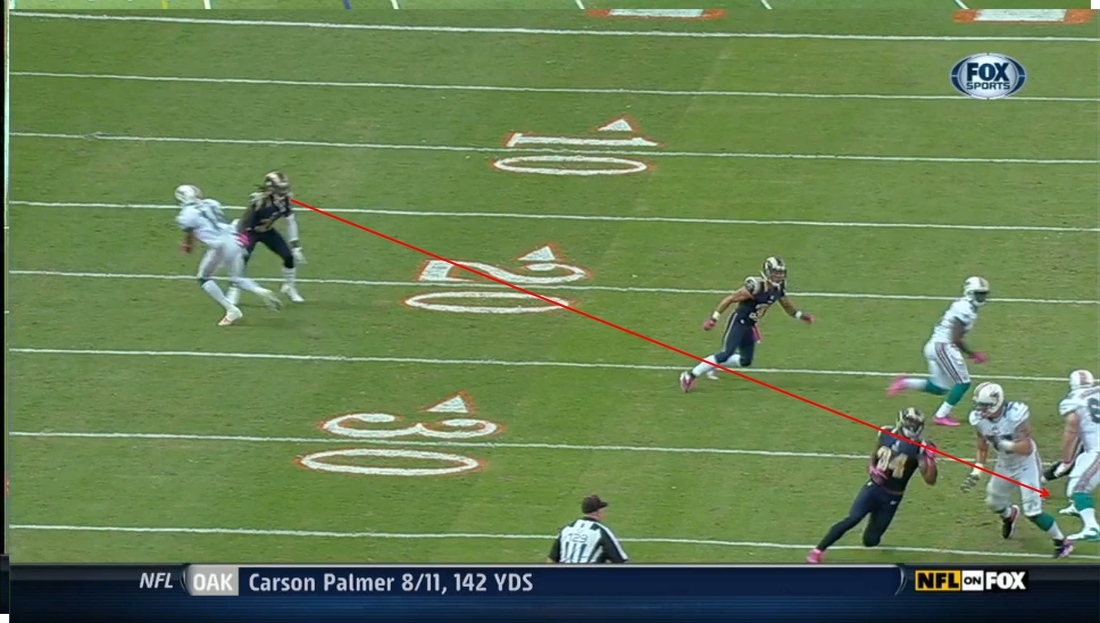 As Moore is running around Jenkins, Tannehill is just now bringing his eyes over to that side of the field. Meanwhile, Bush and Mikell have met five yards behind the line of scrimmage. Bush is about to start moving backwards, but it's enough to keep Tannehill safe. 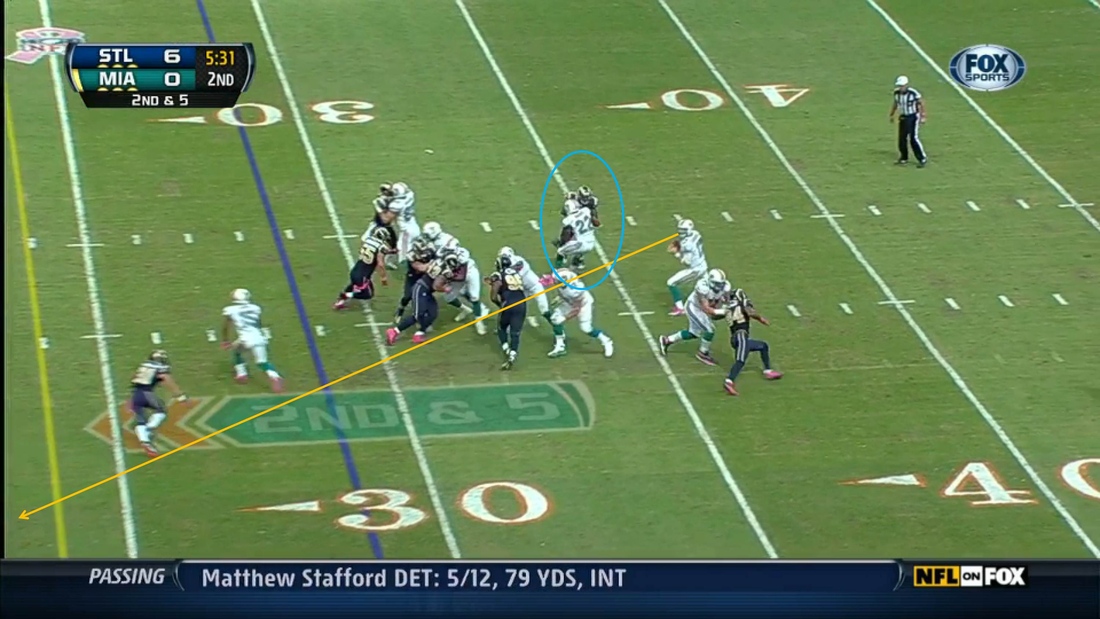 Hey, look at that. There's a red arrow going from Jenkins toward Tannehill. But now, there's also a yellow arrow which does absolutely nothing to help Jenkins cover Moore. By this point, Moore is two yards behind Jenkins, yet the cornerback is moving forward. That wrong first step sealed the touchdown for Miami. 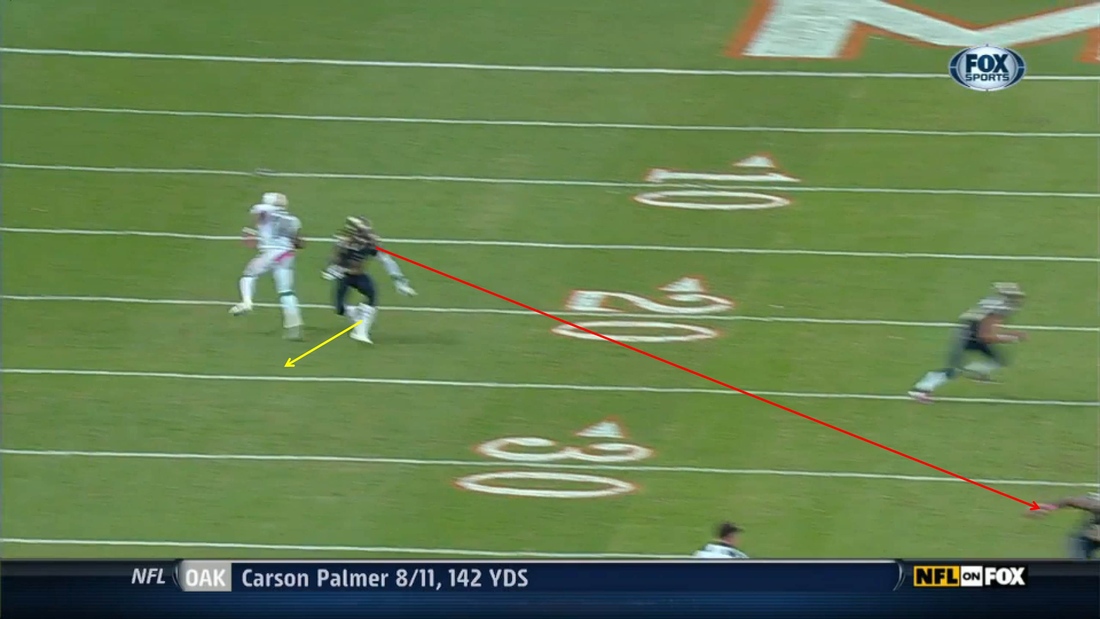 Looking at the coach's film, Tannehill is now looking at Jenkins, who is still staring at Tannehill. The Miami QB is already starting to throw the ball at this point, knowing Jenkins has zero chance of recovers, and Tannehill's look at the deep safety held him in place, and out of the way of this throw. Meanwhile, if you look closely at the blue circle, Bush is beginning to stumble backwards from the hit with Mikell. 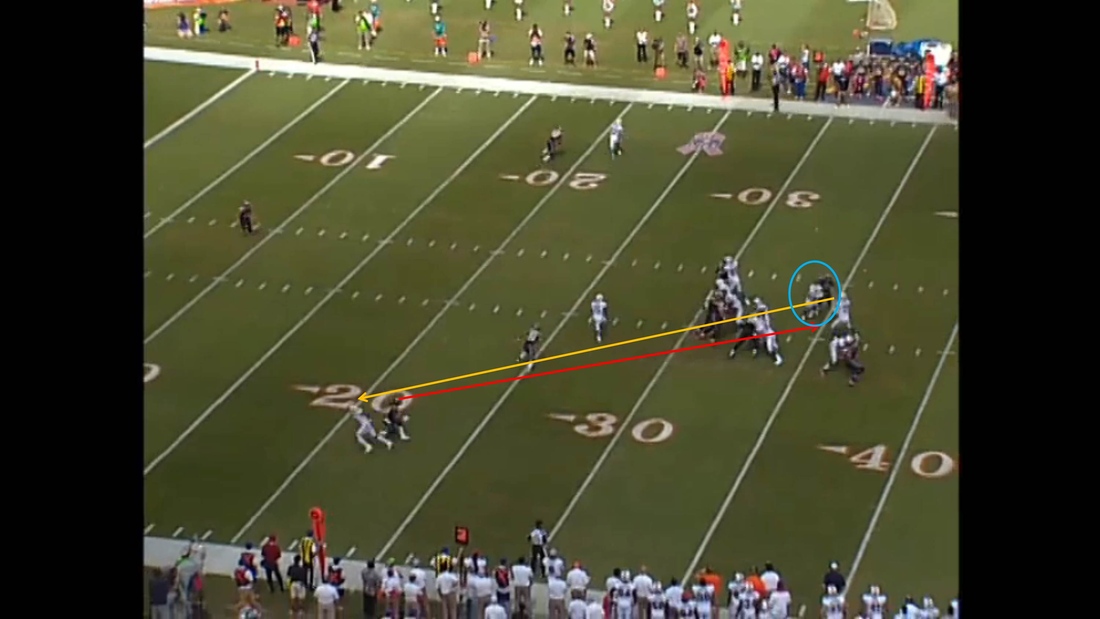 The blue circle changes to the blue arrow in this one picture, but this gives you a better look at what's happening to Bush. And, for those of you keeping track, yes, Tannehill is doing his Michael Jordan impression in this throw. 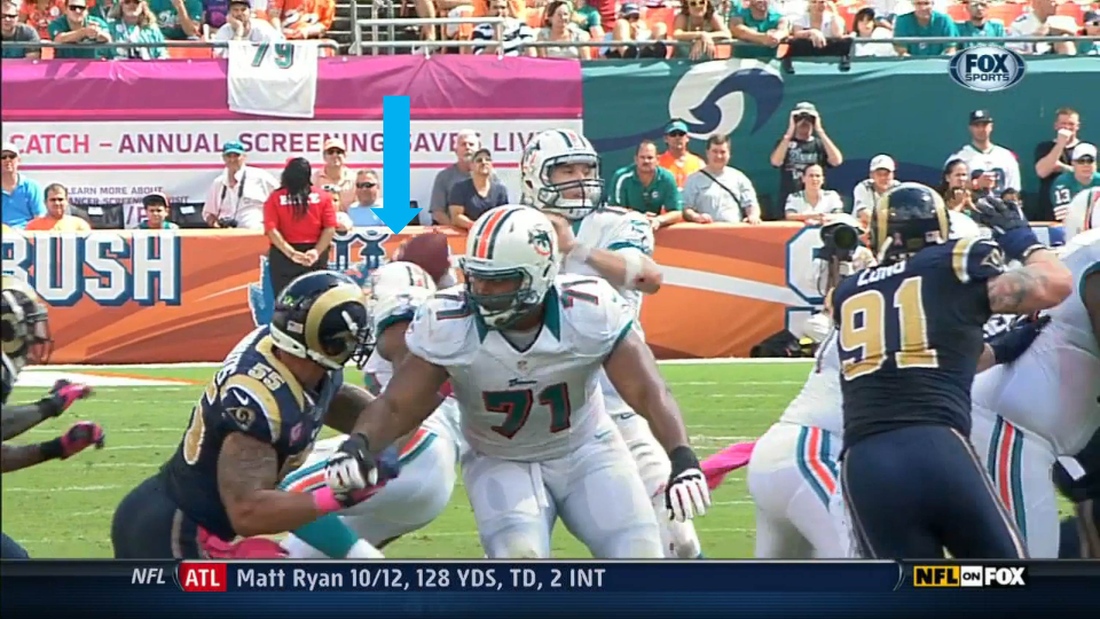 Hey, look at that. The quarterback is throwing the ball. Maybe the cornerback should have realized a wide receiver just ran right past him. Jenkins is still staring at Tannehill, but at least is correcting his movement so he is now trying to at least follow Moore - who is already four yards beyond Jenkins. 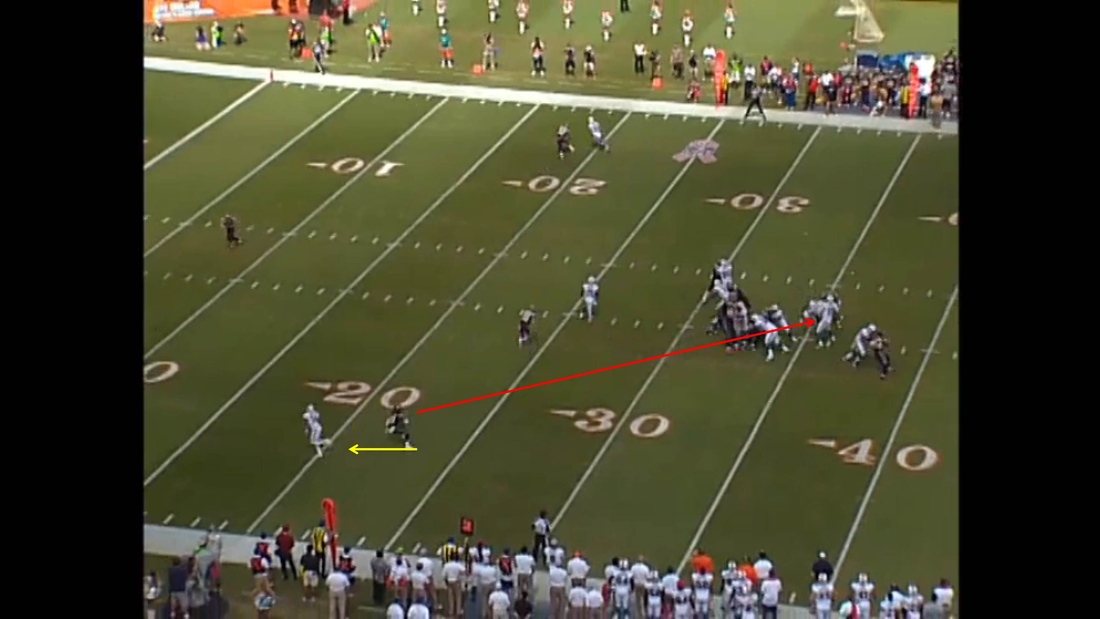 Here's a good luck at Bush getting blown up. The endzone camera of the coach's film really shows that Tannehill could not step into this throw because Bush is falling at his feet. 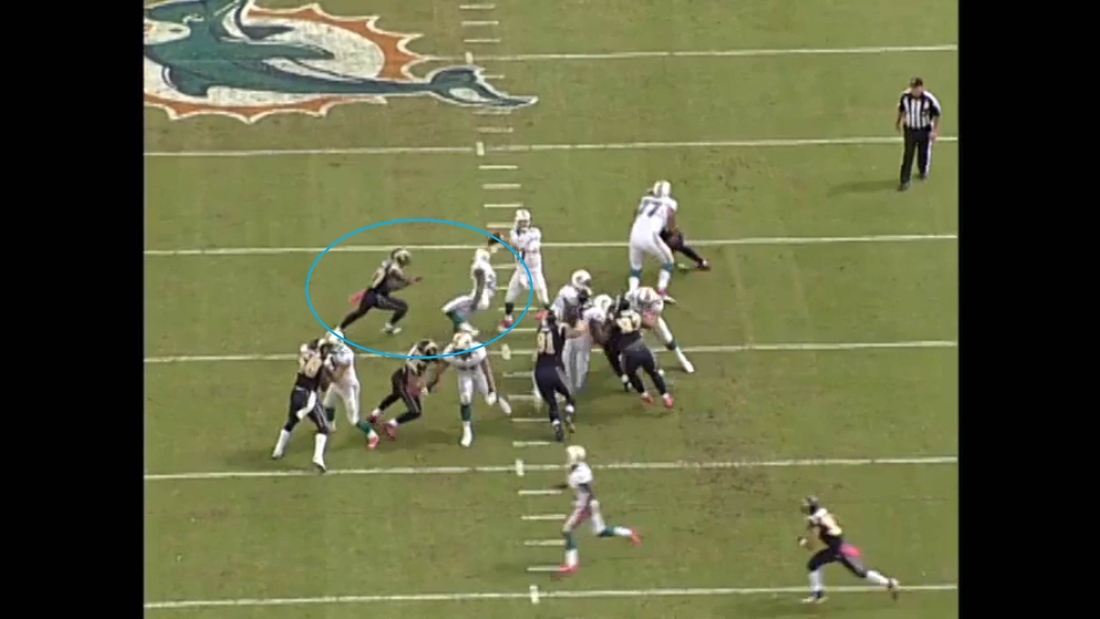 Tannehill let's go of the ball at the 36 yard line as Bush falls into him. Mikell, who Bush was blocking, is just reaching Tannehill at this point. The other six rushers from the Rams were stonewalled, including Jake Long taking right defensive end Robert Quinn ten yards behind the line of scrimmage. 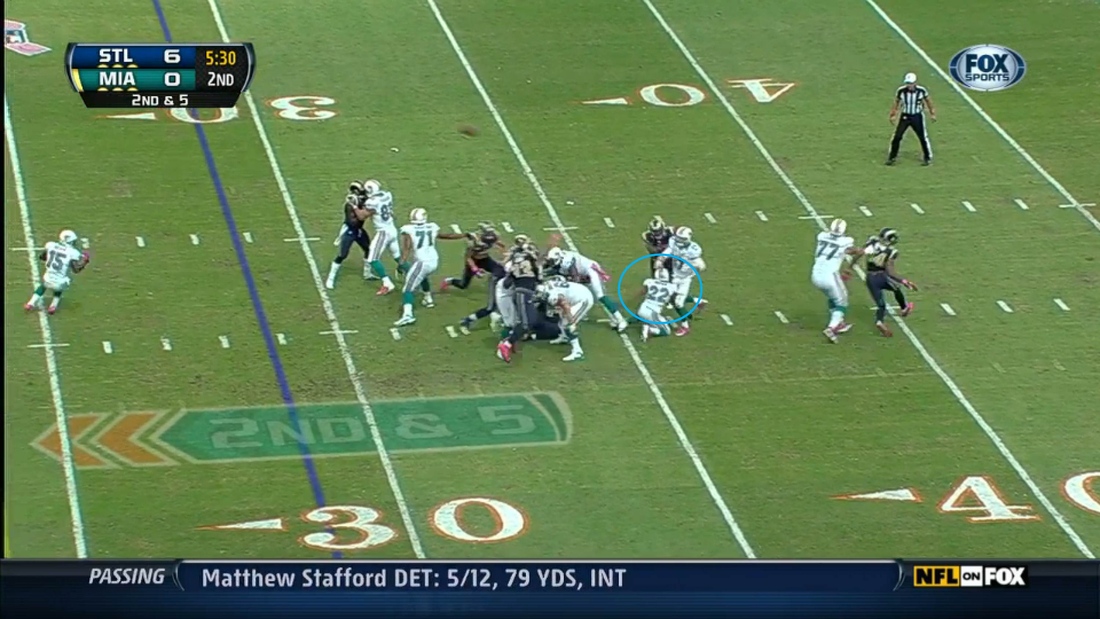 You can now see exactly how open Moore is. The ball is still flying to the now streaking Moore, while Jenkins tries to recover and Dahl make a move to get across the field. 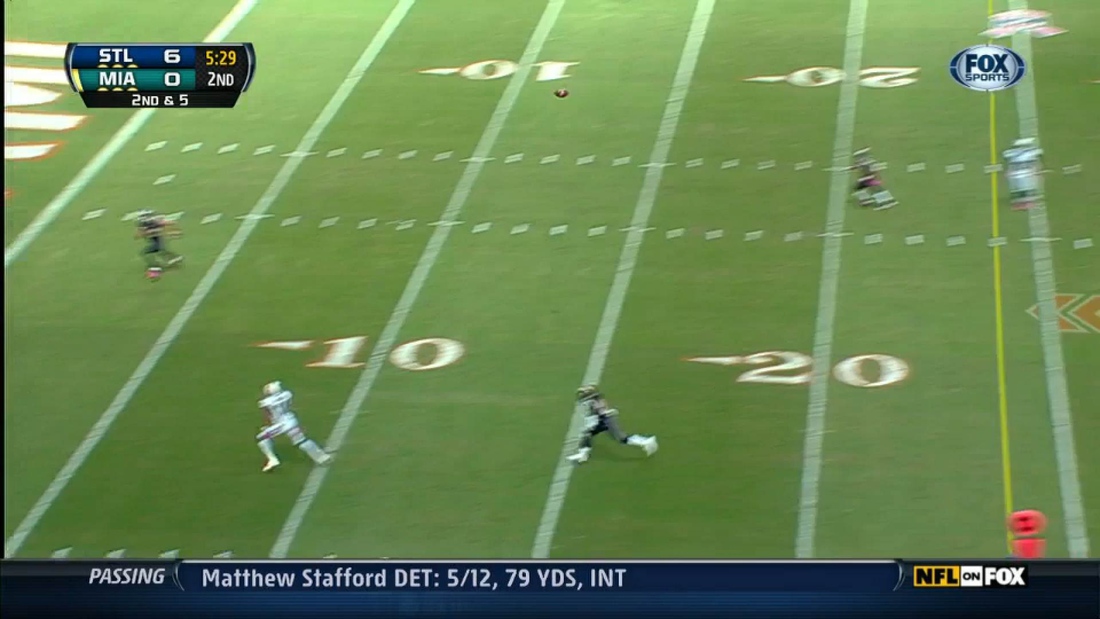 Moore catches the ball, 34 yards down field from Tannehill's throw, right as he is crossing the two yard line. Tannehill hit Moore exactly where he needed to and without an ability to step into the throw since Bush was at his feet. At this point, Jenkins has completely given up on the play, knowing he messed up (after the play, he's seen nodding and hitting himself in the chest). 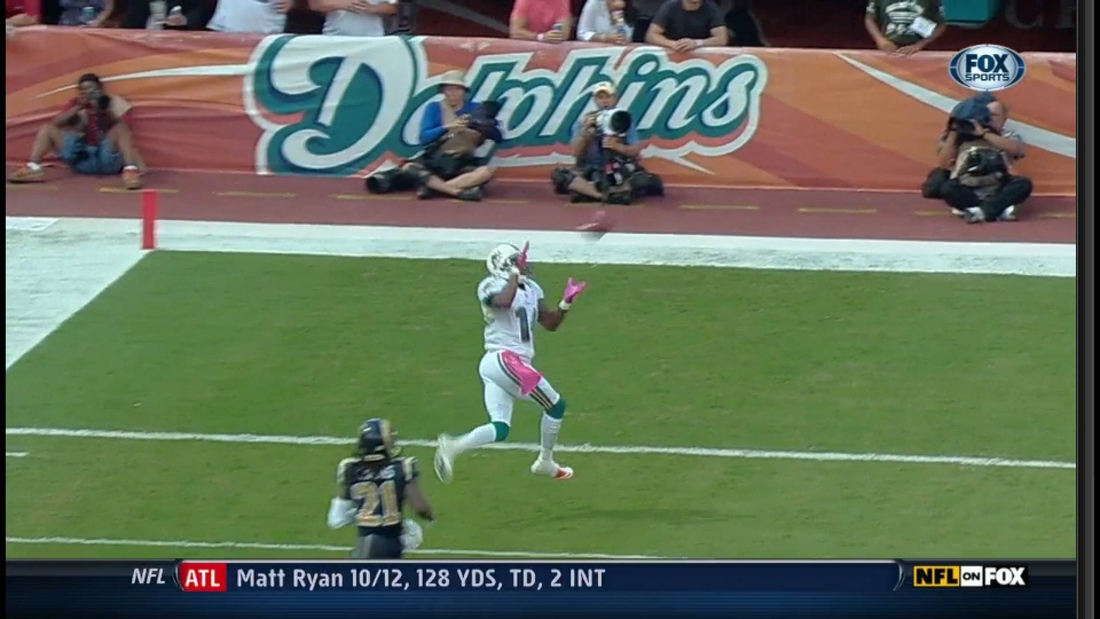 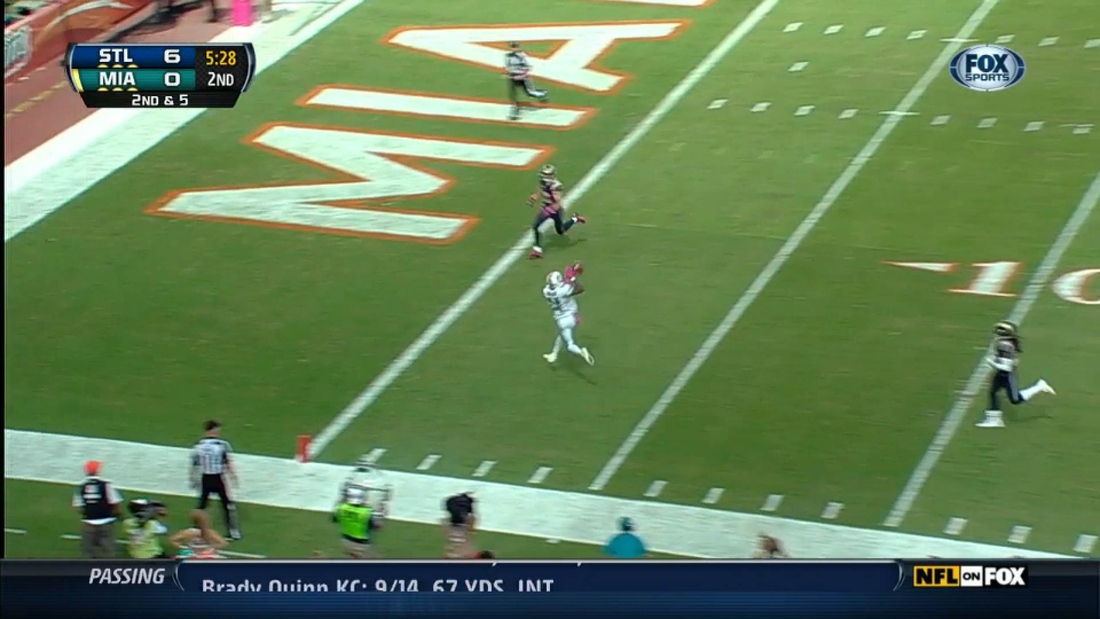 After running down the field to meet up with Moore, Tannehill looks pretty happy to tie the score against the Rams, with Miami taking the lead with Dan Carpenter's extra point. 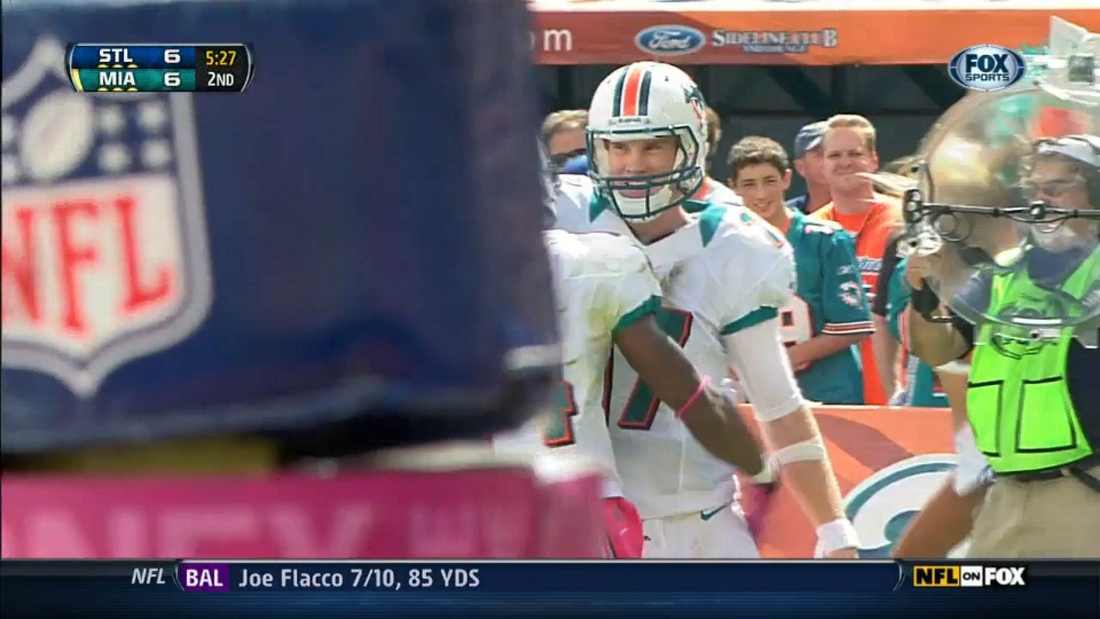 While the main reason the Dolphins scored so easily on the play was clearly Jenkins staring at Tannehill the entire play, but there are several other things that went well on this play to allow it to happen. Tannehill recognized the blitz and adjusted the protection prior to the snap. The offensive line and Reggie Bush did a great job making sure all 7 pass rushers were picked up. Tannehill looked off the safety perfectly, and threw a perfect pass. And, Moore ran a perfect route. He attacked Jenkins, even if the cornerback was not moving his feet, then made the double move to get open deep.

This play was a great moment in the game for the Dolphins. However, it should make fans happier about the future. Tannehill seems to be fully in control of the offense and knows what he has to do, and where he has to look, to complete the pass he wants.