Rams at Dolphins: Where to Watch, How to Watch. and What to Watch

Share All sharing options for: Rams at Dolphins: Where to Watch, How to Watch. and What to Watch

The Miami Dolphins improved to 2-3 last week with a win over the Cincinnati Bengals. With the bye week scheduled for next week, Miami will be looking to come away with a win today against the St. Louis Rams to head into the bye with a .500 record. How can you watch the game? Of course, we have all the information you need. 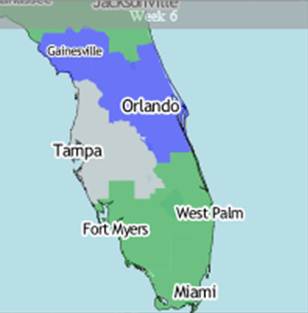 Time: 1:00 pm Eastern
TV - Fox
Announcers - Chris Myers and Tim Ryan
*NOTE: This is Miami's first game on Fox this season. Make sure you are checking the correct station.

Like last week, the television coverage for this game is pretty simple to explain. If you live in Missouri, you are going to get the game, except in the Kansas City market. That will extend through most of Illinois, exept for the northwestern portion and the Chicago market. Florida, meanwhile, will get the game from the Fort Myers and the Melbourne area south, as well as from Jacksonville to Tallahassee. Orlando to Gainesville will see the Dallas at Baltimore game, while the Tampa area will not have an early game on Fox due to Kansas City at Tampa Bay being on CBS at the same time.

Obviously, Fox is going to be the place to watch this week in the markets, but, outside of the green portions of Florida, or every where else in the country, DirectTV's NFL Sunday Ticket package will air the game on channel 705.

For our international fans, we can help you with a little bit of information about the games you will get this week. In Canada, at 1:00pm Eastern, CTV will air the Cowboys at Ravens contest, except in Ottawa, where you will see the Lions at Eagles. TSN2 will be showing the Colts at Jets contest at 1:00pm Eastern. In the late time slot (4:pm Eastern), CityTV Toronto and Sportsnet West/Pacific will air the Bills at Cardinals, and RDS, the rest of CityTV, and SportsNet East/Ontario will show the Patriots at Seahawks.

In the UK, SkySports will air the Lions at Eagles contest at 18:00 Western European Time. They will air the Giants at 49ers at 21:25 WET. The Sunday Night Football game, featuring the Packers at Texans, will start at 01:20 WET Monday morning on Channel 4.

In Germany, the Cowboys at Ravens game will air at 19:00 Central European Time on ESPN America, followed by the Giants at 49ers at 22:00 CET and the Chargers at Saints Sunday Night Football at 02:15 CET.

And, for our AFN viewers, AFN Prime Atlantic will be airing the Lions at Eagles game, while AFN Sports has the Cowboys at Ravens while AFN Xtra comes in with the Rams at Dolphins, in the early time slot (7:00pm CET, 8:00pm in Iraq/Kuwait, 9:30pm in Afghanistan, 2:00am Monday Japan/Korea). In the late slot, AFN Prime Atlantic moves over to cover the baseball playoffs while AFN Sports airs the Giants at 49ers and AFN Xtra airs the Patriots at Seahawks (10:00pm CET, 11:00pm in Iraq/Kuwait, 12:30am Monday in Afghanistan, 5:00am Monday in Japan/Korea) . AFN Sports will also air the Sunday Night Football Packers at Texans game.

1. Miami Offensive Line vs. St. Louis Defensive Line - This was a key to last week's game against the Bengals, and it's probably even more critical this week. Chris Long and Robert Quinn are no joke pass rushers, and while Quinn draws the short straw in trying to beat Jake Long this week, Chris Long could find himself abusing rookie right tackle Jonathan Martin throughout the game. The rookie is developing nicely for the Dolphins, but he is still a rookie and is still getting used to playing the right side after being a left tackle through college. The line once again has to step up this week to give Ryan Tannehill the chance to throw the ball.

2. Dolphins Running Game - Throughout the season, this has routinely been the spot to worry about the Miami secondary. Today, I am going to trust that they will play well enough to not include them on this list. Instead, I am going to look at the running game. To beat the Rams, Miami is going to have to return to its rushing attack from early on this season. To do that, Reggie Bush needs to be healthy and ready to go. The other side of that is, what kind of role will rookie running back Lamar Miller have today. Second year back Daniel Thomas is out this week with his second concussion of the season. How Miller responds to an increased role this week will go a long way to determining the winner of this game.

3. Halftime - Most of us won't get to see the Dolphins' halftime show this weekend, but it's going to be a major part of this game. Linebacker Zach Thomas and defensive end Jason Taylor will go into the Ring of Honor today, and will rightfully be inducted together. The emotions of the ceremony could be a huge factor in this game - just like last year's season finale when the Dolphins won in Taylor's last game.

"I think they're ahead in the turnover margin I believe. They're not a highly penalized team. They're playing well. They're a well-coached team and they're certainly getting better as the year's gone on and it's evident on the film. The film from the game the other night that they played certainly was probably, I can't speak to their, certainly it was their best defensive performance of the year. They have good players. They're well-coached. They're probably getting accustomed to the system and how things work and all that, but they're a developing team and they're doing a nice job. I would say the turnover margin is probably one of the reasons." - Miami Head Coach Joe Philbin on the Rams having middle of the road statistics but a 3-2 record, 10/11/12

"It's their front. It starts with (DT) Randy Starks. They're big up front. (LB) Karlos (Dansby) in the middle and their safeties fill the run. They're real stout and they're disciplined and they understand run schemes. They adjust from week to week based on your run concepts and they do a good job taking it away." - St. Louis Rams Head Coach Jeff Fisher on why it's difficult to run against Miami, 10/11/12

"You know what? Reggie is playing the best he's played in this league as a running back. He's running the ball extremely well. He's already had a couple of big, long runs for touchdowns. But more than that, you can see that he's very comfortable in that offense. They're very comfortable in getting him the ball a lot of ways. He's an extremely, extremely important part of that offense and he's very dangerous right now." - St. Louis Rams Assistant Head Coach Dave McGinnis on Miami RB Reggie Bush, 10/11/12

"They're defensive guys and they're a prideful bunch of guys, both of those guys. I'm proud of them, for one just to get put into the Honor Roll so early after being retired. It's a blessing to have the opportunity to see two Hall-of-Famers get up there." - Miami Dolphins Linebacker Karlos Dansby on Jason Taylor and Zach Thomas being inducted into the Ring of Honor, 10/12/12