The Miami Dolphins lost to the Arizona Cardinals on Sunday 24-21 in overtime. It was the second straight overtime loss for Miami, despite playing well in both games. One of the highlights of the game was the fourth quarter touchdown pass from Ryan Tannehill to Brian Hartline.

Share All sharing options for: A Closer Look at Brian Hartline's 80 Yard Touchdown

Lost in the Miami Dolphins' second straight overtime loss, this one at the hands of the Arizona Cardinals, was actually the impressive performance on both sides of the ball by the Dolphins. When any quarterback sets a passing record for the Dolphins, passing Hall of Fame quarterback Dan Marino in the process, it really is a feat that should be noticed. Yet, it seems like no one has noticed that Ryan Tannehill did exactly that yesterday, coming up just one yard short of the NFL record set by last year's golden boy Cam Newton.

Tannehill passed Marino on an 80-yard touchdown pass to wide receiver Brian Hartline in the fourth quarter, also giving Hartline the team's single game receiving yardage record. The play gave the Dolphins a 21-14 lead, and appeared to put the Cardinals away. Unfortunately, Kevin Kolb was able to drive Arizona the other way in the last two minutes of the game to tie it, before the Cardinals would go on to win in overtime.

The Dolphins lined up with two tight ends, with Jorvorskie Lane and Reggie Bush in the I-formation. Brian Hartline was wide right, running a post route. The Cardinals cheat up one of the safeties, although he is going to drop back into a zone coverage. 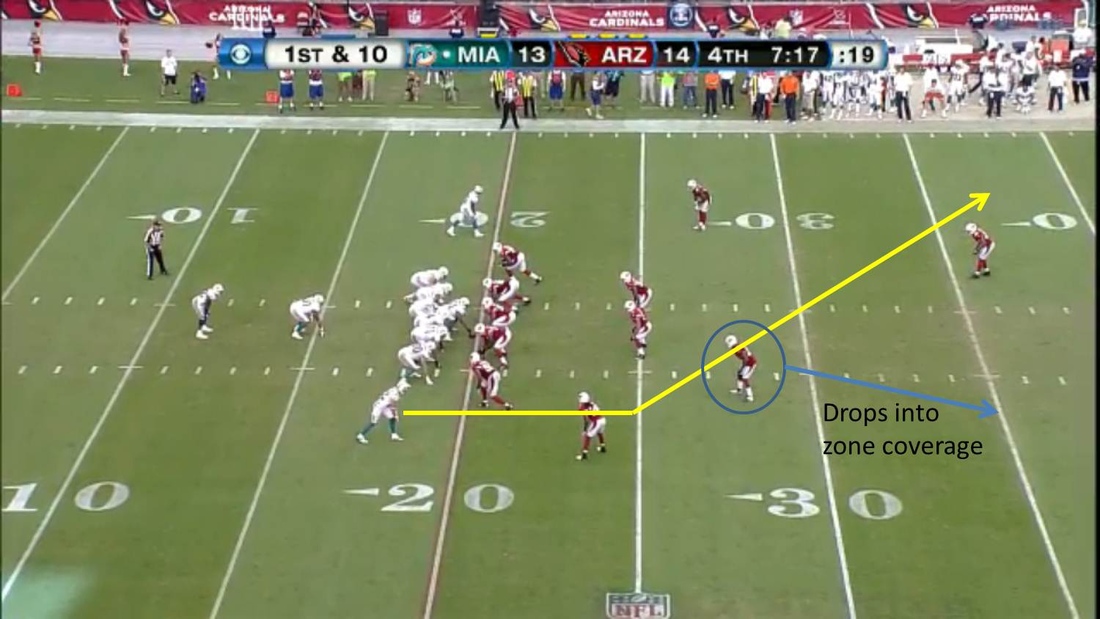 At the snap, the Dolphins run a play action fake to Reggie Bush, which holds the linebackers, giving Hartline a clean break across the middle. 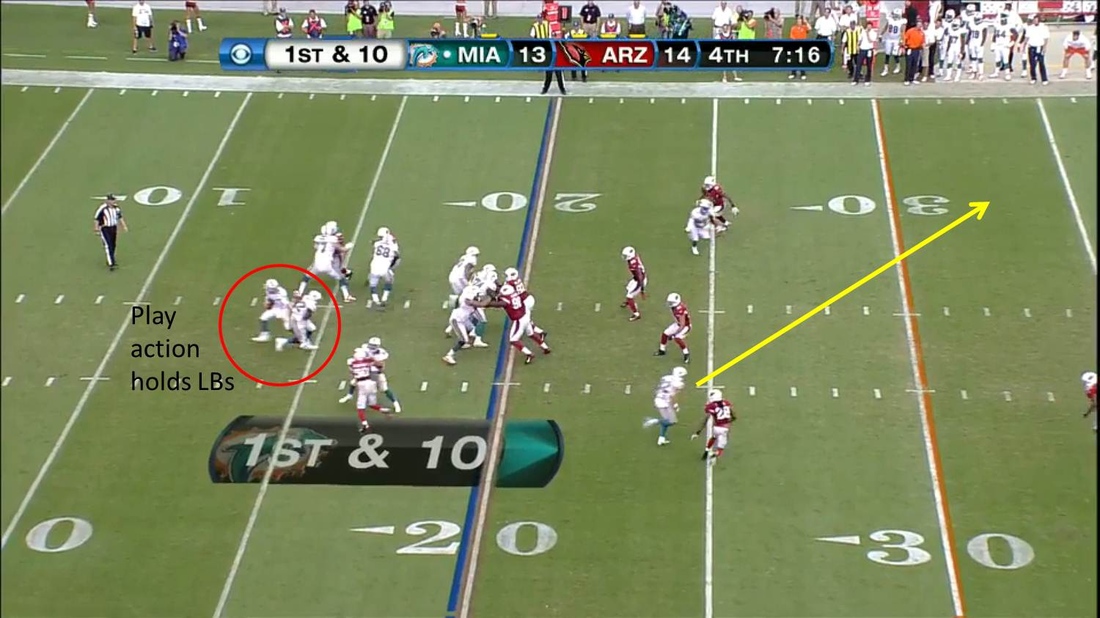 Meanwhile, Hartline gets a clean release, and immediately establishes the inside route on the cornerback, Greg Toler. 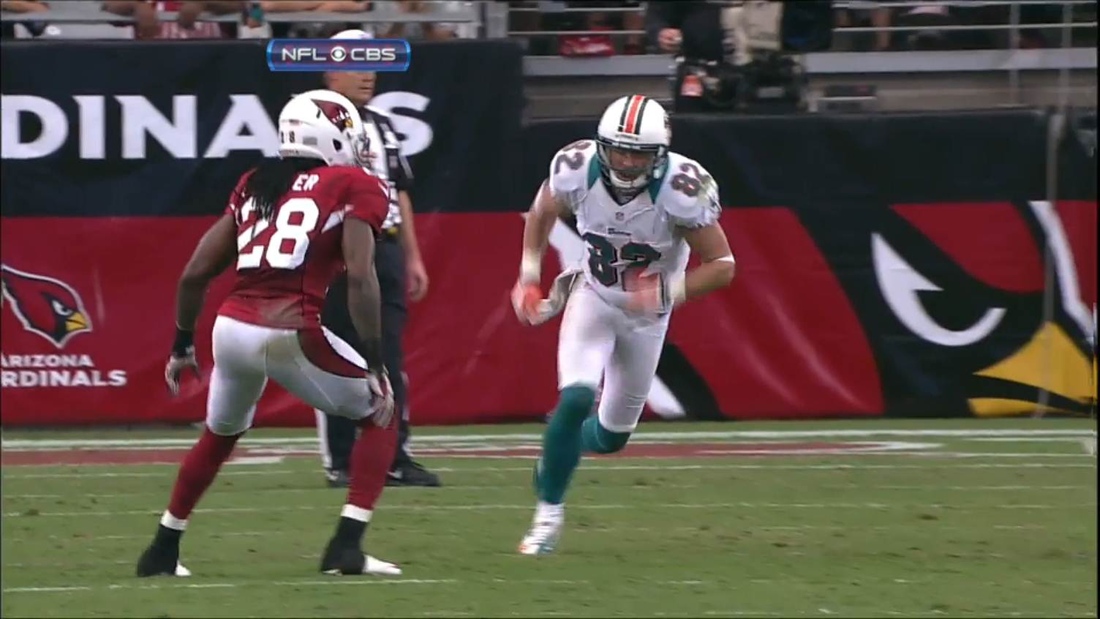 As the play develops, Tannehill steps up into the pocket, avoiding the pass rush. While he is clearly looking down field at Hartline, who at this point is running free, the entire Arizona defense seems to fixate on Bush, who after the fake handoff has slid out into a route, and is left wide open three yards beyond the line of scrimmage. The safety, who does not seem to realize Hartline has gotten behind him, starts to shade to the center of the field, being pulled by Bush's route. 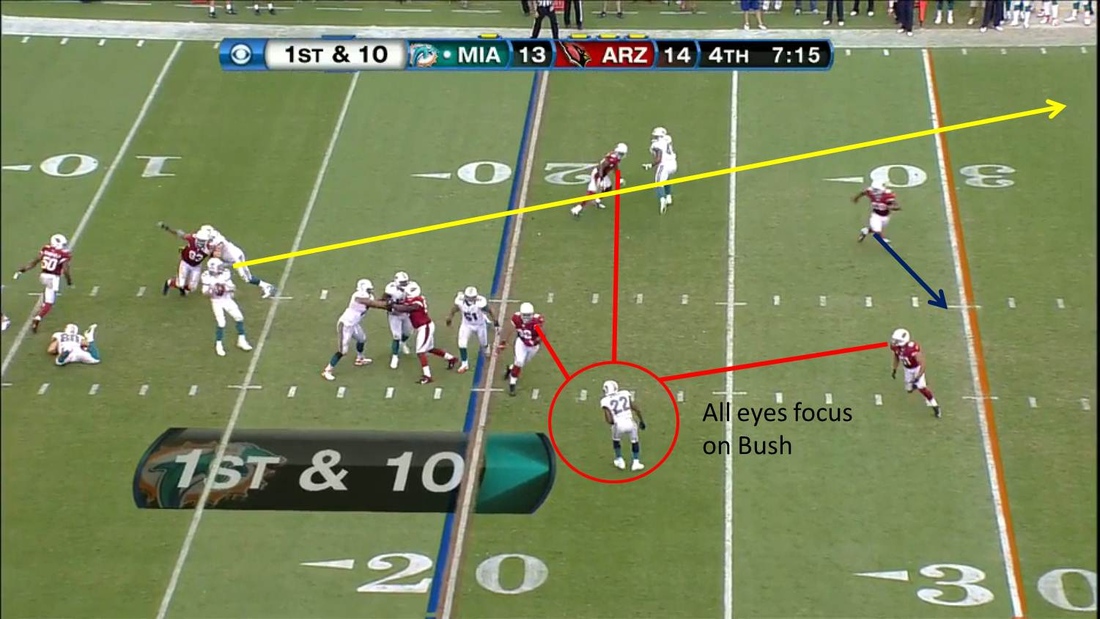 You can see here, as Hartline is passed off in the zone coverage from Toler to linebacker O'Brien Schofield, who should be covering him over the middle of the field until a safety can pick him up, Schofield is clearly fixated on Bush coming out of the backfield. 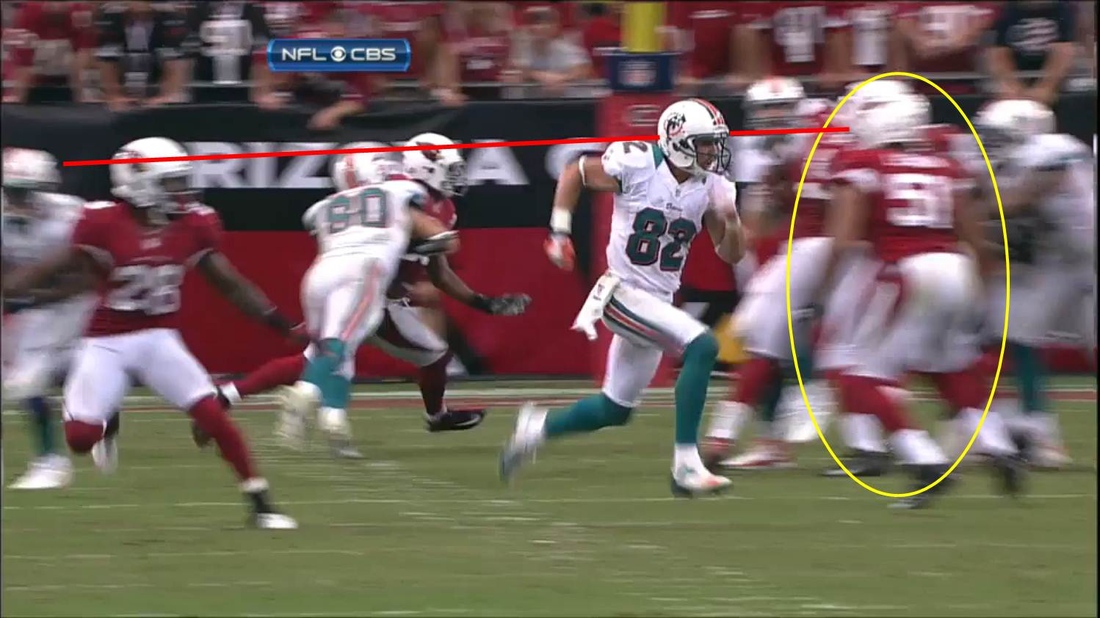 Just after Tannehill has thrown the ball, the Arizona defense realizes that Hartline is all alone behind them. 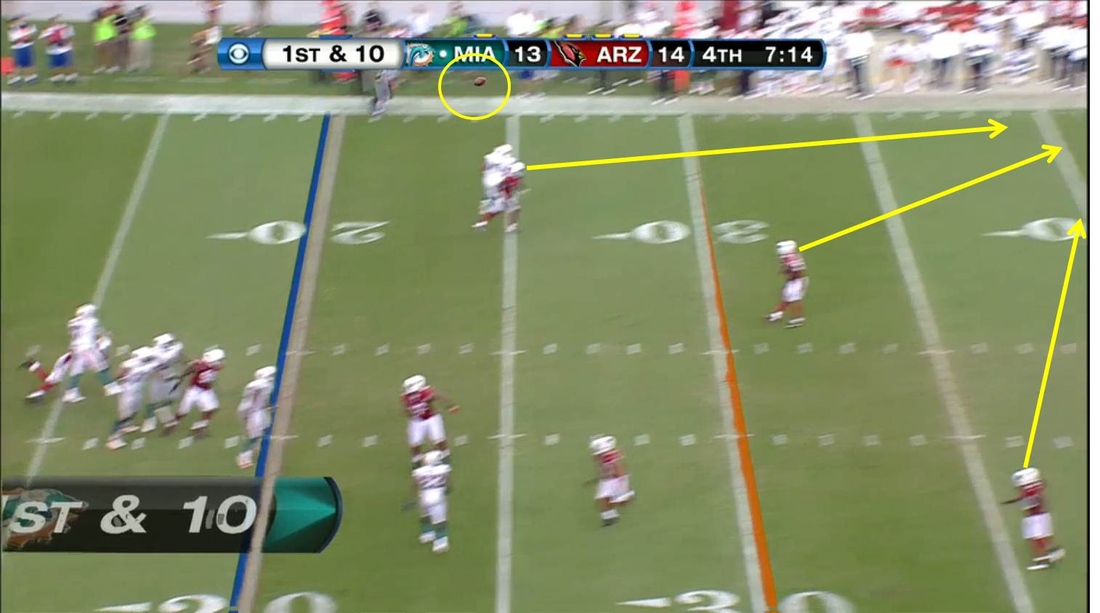 Safety Adrian Wilson begins to move toward Hartline, but seems to be jogging and watching to see if the receiver catches the ball, rather than running full speed to make a play. 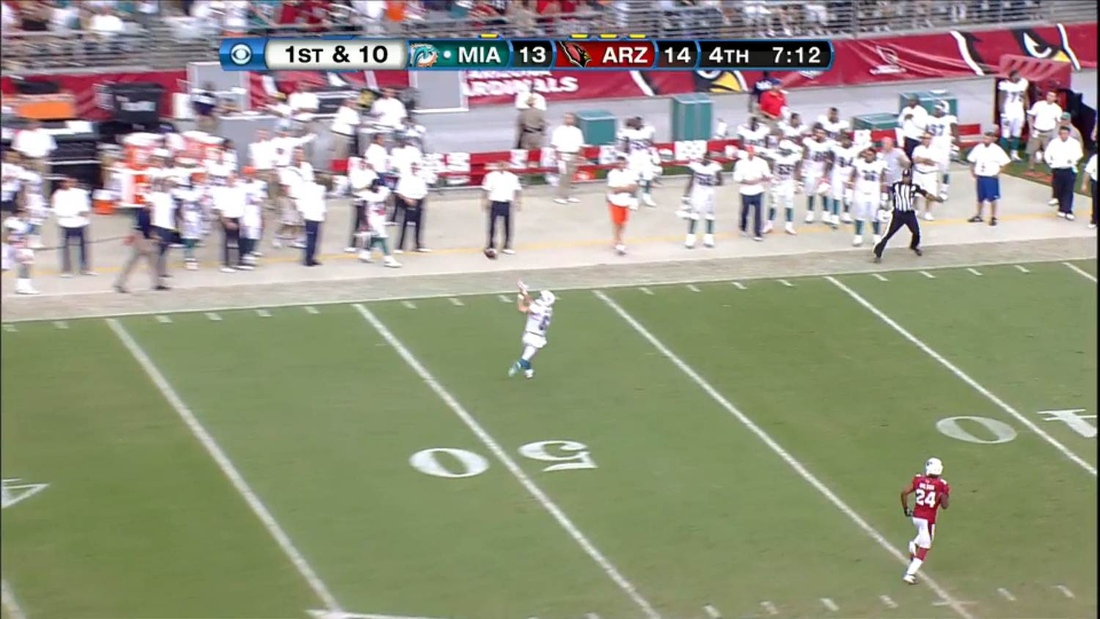 Tannehill drops the ball in to Hartline perfectly, 35 yards down the field. From here, it's simply a footrace between Hartline running straight down the sideline and Wilson trying to take the right angle to cut him off. 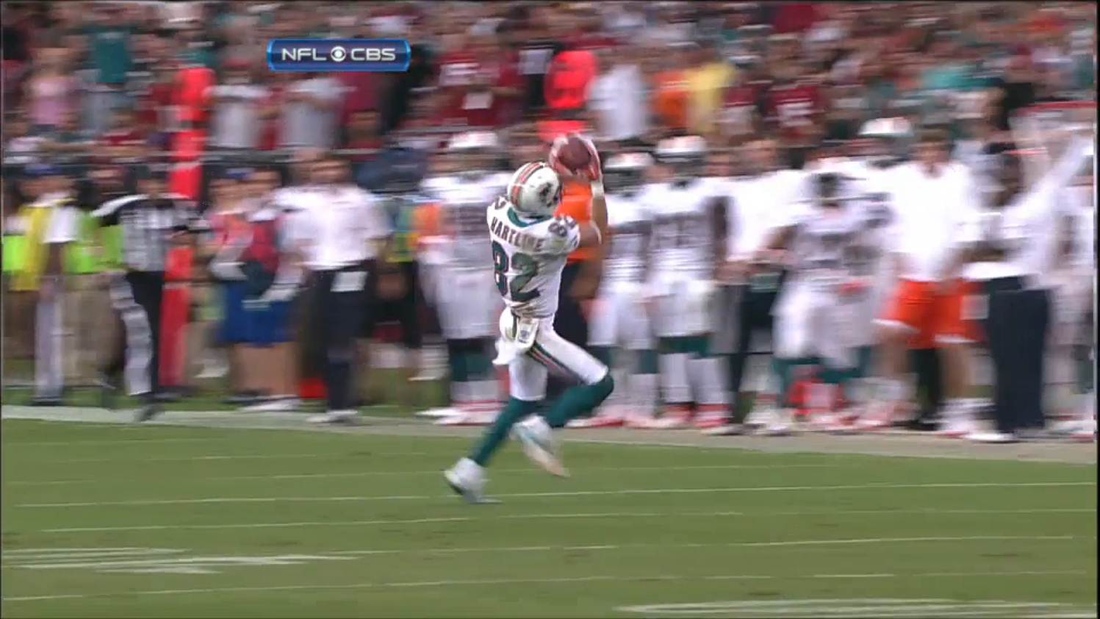 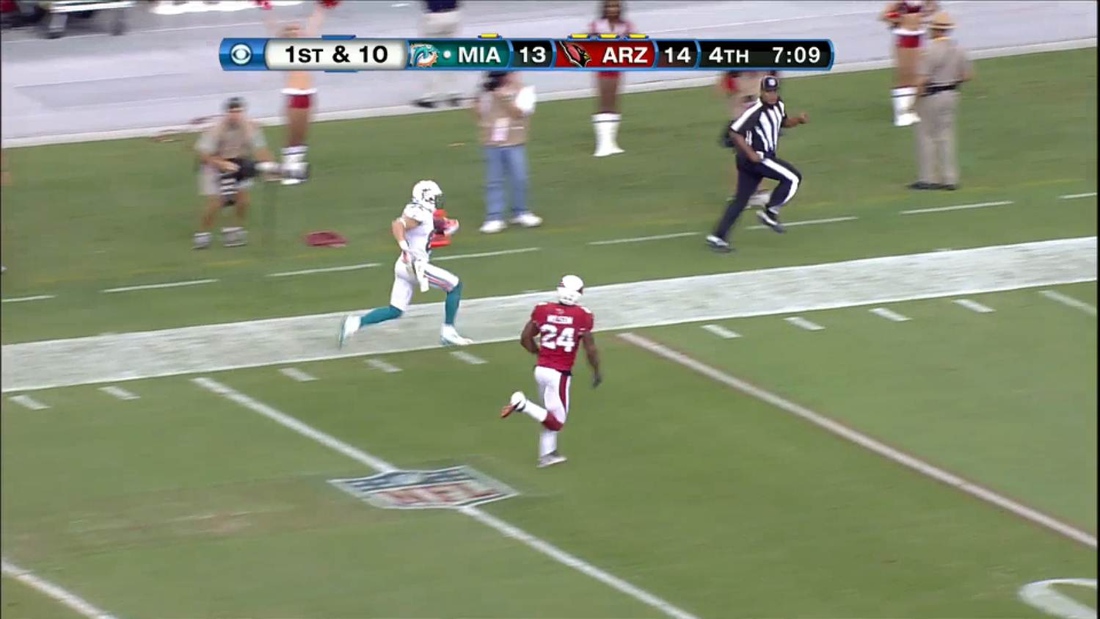 Wilson manages to get to Hartline inside the five, but the wide out is able to keep his feet just long enough to dive for the goal line. 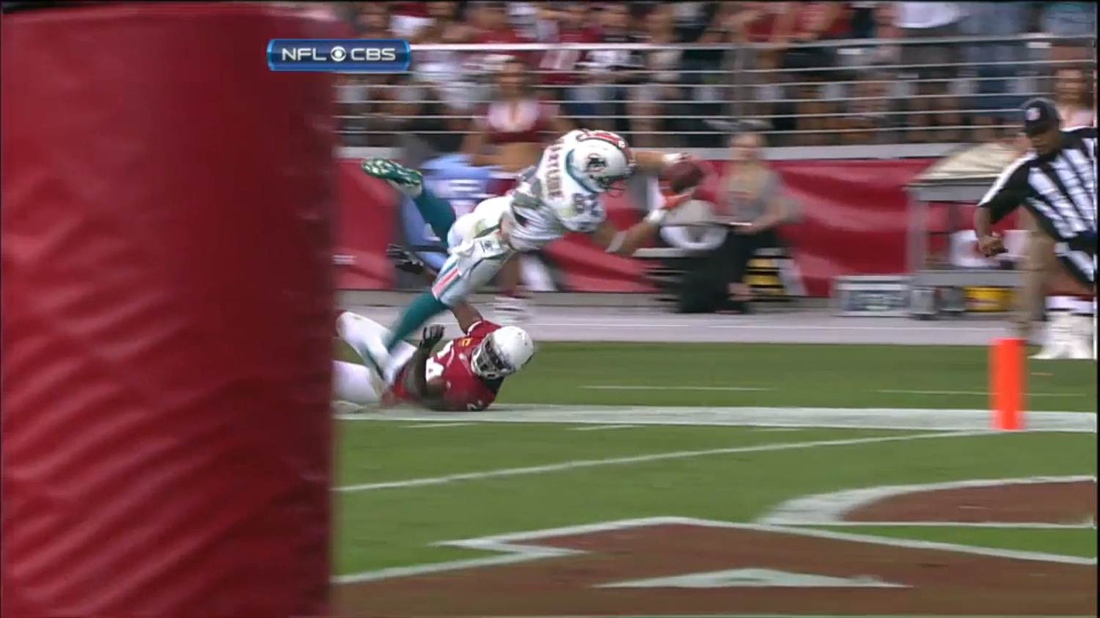 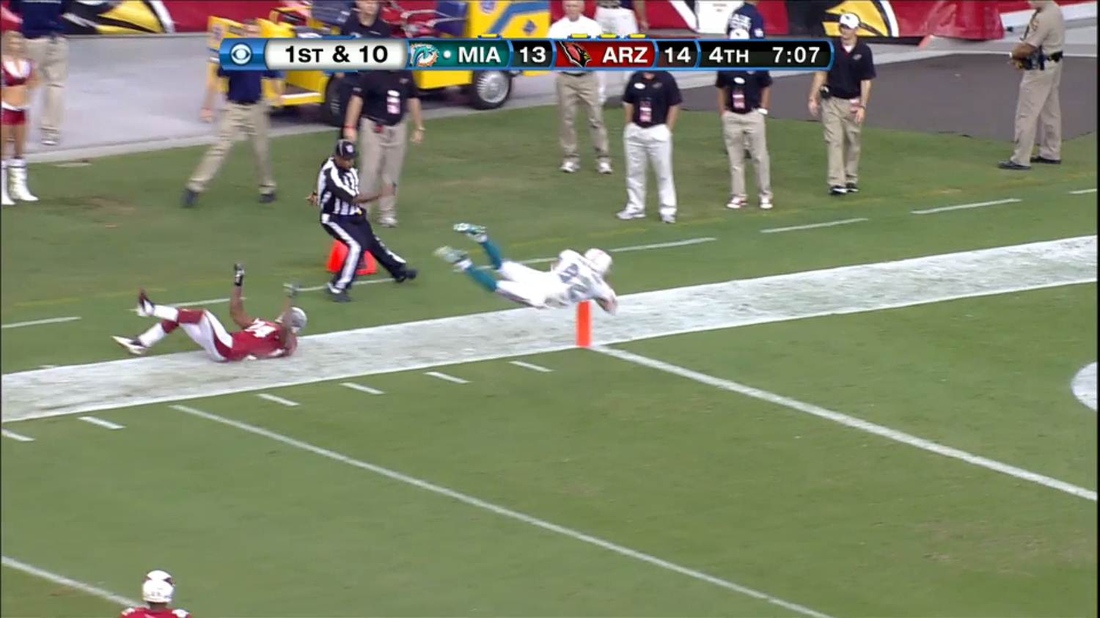 And then the celebration was on. 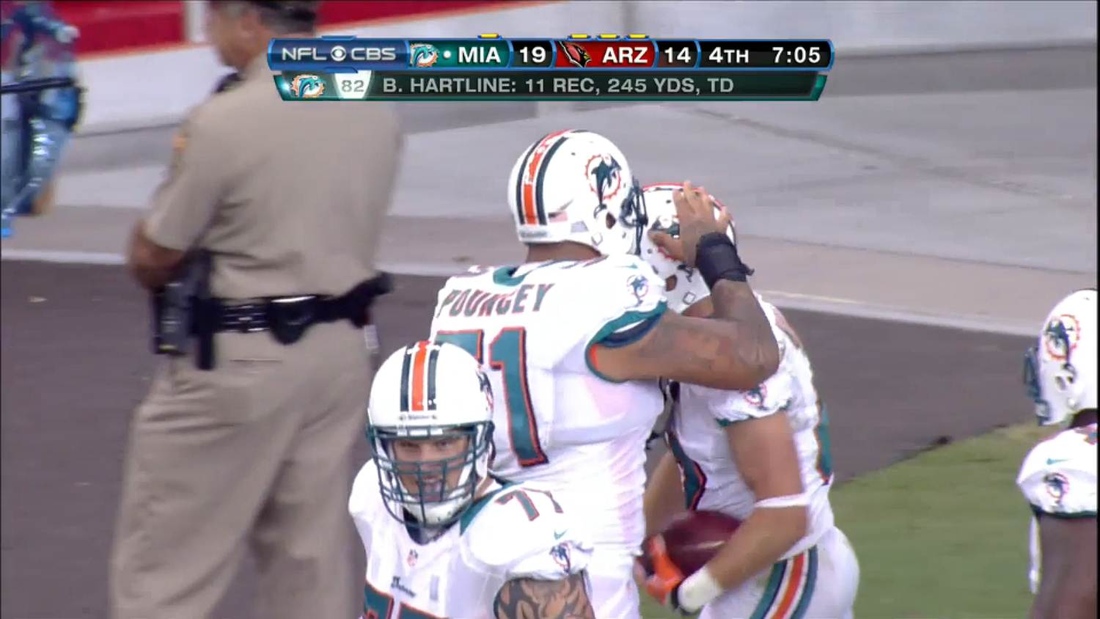 And, the whole play: