Share All sharing options for: Miami Dolphins Caption This - Week 17

The NFL regular season ended this past Sunday, and, as such, we reach the end of our regular season photo caption contest. Each Wednesday, we try to take a look at one picture from the Dolphins most recent game, and come up with an appropriate caption for it. It's a chance to step away from the reality of a disappointing Dolphins season, and have a little fun for a while.

This week, we take a look at linebacker Jason Taylor staring at Jets head coach Rex Ryan. I ask you, what were the two thinking in this moment?

Before we get to the captions, however, we need to take a look back at last week's caption contest: 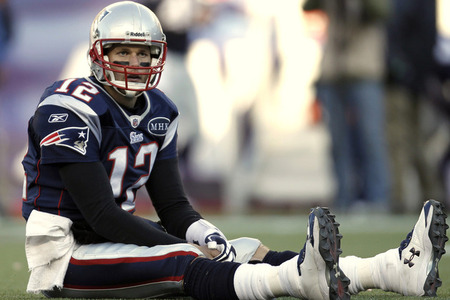 The Week 16 Caption This contest took a look at New England Patriots quarterback Tom Brady as he sat on the ground following a sack by the Dolphins. The winning caption from last week was written by t.shug:

"Maybe if I stay on the ground they'll throw a flag"