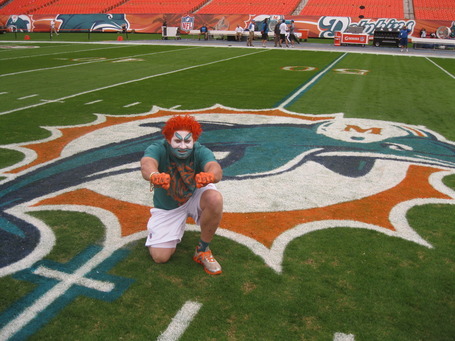 As the 2011 season started, the people at Guinness asked all of us here at the Phinsider a simple question - who was our boldest fan? And, the answer was even simpler - Ohio Fin Fan For Life easily claimed the top spot as our boldest fan.

But, the story doesn't end with the announcement made on the site back then. Far from it.

A couple of days after the announcement on the site, OFF4L continued over to the Facebook side of the contest, and filled out the questionnaire located over there. Answering questions like "How BOLD a fan are you?" Ohio explained how he wears Dolphins face paint to every game - home and away, or "How committed are you?" to which he explained he leaves his home in Ohio every year for the last five years, to travel to Miami to catch as much of the season as he can. After finishing the entry, he was notified that winners of the contest would be announced in December, with the prizes given out then.

Well, on December 12, Ohio was notified by email and phone that he had indeed been declared a winner in the contest. But, he's not just A winner. He's one of five Grand Prize winners.

So, what does he get? We'll, let's look at the timeline for the prize he has received. He flies next Friday to Indianapolis for three nights, before flying home on Monday. What's happening in Indy next weekend? Oh, yeah - the Super Bowl!

Ohio will be in attendance at the announcement of the 2012 Pro Football Hall of Fame class, and will attend a ceremony honoring him as one of the boldest fans in the country.

And, maybe the scariest part of the prize is that a bronze bust is being made of Ohio. That's right. Guinness is making a bronze bust of him - just like a Hall of Fame bust - to be displayed in the Guinness Boldest Fan display in the Hall of Fame. Yep. In the building housing the busts of Dan Marino, Don Shula, Bob Griese, Paul Warfield, Dwight Stephenson, Larry Csonka, Jim Langer, Larry Little, and Nick Buoniconti, there will now be a bust of OFF4L. Kind of freaky, isn't it?

Even through all of the excitement, Ohio never faltered in remembering that it was you, the Phinsider readers, who started him on the path to land this dream award. On the bust, Ohio had them put:

So, as you enjoy all the festivities of this upcoming week, just remember, one of our own, and wifey, is getting to experience it firsthand. And, it's thanks to all of you. Congratulations Giffin! 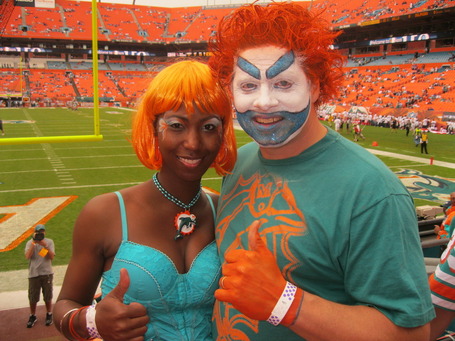