Miami Dolphins wide receiver Brandon Marshall is expected to be wearing the first Nike apparel as the shoe and athletic gear giant takes over from Reebok - a pair of Vapor Jet gloves. With all the speculation that Nike could be bringing the Pro Combat series from the NCAA to the NFL - and much fan hype about what new team jerseys could look like - any apparel that Nike releases will immediately come under scrutiny.

And, the release of the gloves has not dodged that scrutiny. 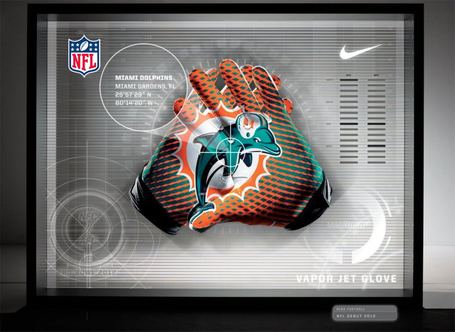 Before we go any further, I must remind everyone that these gloves are prototypes. The are going to be worn during the Pro Bowl, just so that Nike can get feed back from the players. Any visible changes could very easily change back to what is currently in use. But, on to the speculation.

The first thing people picked up on the Dolphins logo was the color of the Dolphin has changed. The aqua looks lighter on the gloves than it does on the current version of the logo. Now, it could just be the picture or the glove, but until Nike releases the full uniforms planned for next season, people will continue to wonder if the Dolphins' aqua color is changing.

Now, this is a minor change. It's not like the logo itself changed - as appears to have happened to the Carolina Panthers logo. It's a shade change. But, it could also signal other changes to come.

Nike and the NFL have tried to quiet the speculation recently, with the NFL's director of communications, Brian McCarthy, telling Pro Football Talk's Mike Florio, "We anticipate new uniform technology (i.e., performance-driven, lighter materials). That's what Nike's [Charlie] Denson was referring to in his interview in 2010 regarding changes.

"Logos are controlled by teams and the NFL," McCarthy added. "That will not change. Teams have to apply to league to make changes to logos and colors."

For now, the speculation will continue - nothing can be said about the new uniforms until after the Super Bowl, when Reebok's contract officially ends. Plus, the league has said the new uniforms will be unveiled in April, with the 2012 Draft, so there's still plenty of time for fans to develop their own ideas for new Dolphins jerseys. And, if the team is looking to make any changes, perhaps they can address why the Dolphin on the helmet doesn't wear the team's helmet.