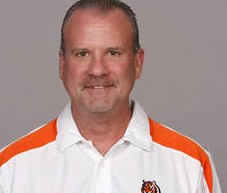 Multiple reports have come out today saying the Miami Dolphins are close to signing Cincinnati Bengals defensive backs coach Kevin Coyle as the team's new defensive coordinator. Coyle's hire would be the first by the team since making Joe Philbin the new head coach.

"Bengals secondary coach Kevin Coyle concluded his interview with the Dolphins on Thursday. It is not wrapped up yet, but all indications are Coyle will be Miami's new defensive coordinator after 11 seasons here as the secondary coach."

Coyle has served on the Cincinnati coaching staff for the past 11 seasons. His first two years with the team, his first job in the NFL, Coyle was the team's cornerbacks coach. Coyle was promoted to defensive backs coach in 2003, overseeing a defense that has intercepted 150 passes over the past nine years - 125 by defensive backs.

Reedy also states that, if Coyle does indeed finalize the deal with the Dolphins, Jacksonville Jaguars linebackers coach Mark Duffner would likely come with him, serving as the Dolphins' linebackers coach and assistant head coach. Prior to joining the Jaguars, Duffner worked with Philbin and the Packers and the Cincinnatie Bengals, with Coyle.