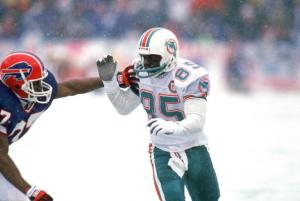 During the recent Dolphins Cycling Challenge, Miami Dolphins wide receiving great Mark Duper was one of the many riders raising money for the fight against cancer. Little did Duper realize, he would soon be fighting the disease himself.

Duper, who teamed with Mark Clayton in the 1980s to form the Marks Brothers, catching pass after pass from Dan Marino, told the Miami Herald, "It was like, ‘OK, this is not right. I know I'm out of shape, but I'm not that out of shape.' "

Following the ride, Duper went to see his doctor, who conducted several tests, eventually diagnosing Duper with cancer. An ultrasound showed Duper had a football-sized tumor on his right kidney. The doctors also worried that the disease had spread to Duper's liver.

Further tests, including a CAT scan, showed that what the doctors thought might be cancer in his liver, was really harmless lesions, and his liver was clean.

On January 12, Duper went in for surgery, directing the doctors that, "Whatever's there, you take it out." After a successful surgery, doctors determined the cancer really was contained within kidney, and reported that Duper has a 95% chance of being cancer free.

Since his surgery, Duper says he feels great and is sticking to his recovery schedule. The doctor, however, seems dubious of Duper's ability to do nothing physical for 6-8 weeks. "I guarantee you he's going to be swinging a golf club way before six weeks," he joked.

Duper, who has often visited hospitals to see patients, told the Herald, "Seven or eight years ago, I probably would be pretty much doomed. The research has advanced a helluva lot, which is great. I'm just here to tell the story."

With today being Duper's 53rd birthday, it's a good day to be able to tell the story.