Share All sharing options for: Miami Dolphins Caption This

After earning the bye week last week, the Phinsider's weekly picture captioning contest returns this week. With the Dolphins' season over, it's time to look around the league and find some of the best pictures from the NFL season - or even other sports and leagues as the offseason progresses.

Before we get to this week's photo, we need to take a look back at the effort from two weeks ago. It was a, we'll say rough, effort to caption the photo of Rex Ryan and Jason Taylor sharing a moment. Maybe Little Nicky 21 stated it best in the thread:

Lol @ how not funny we are

Well, someone was going to win the contest. Continue reading to see the photo from two weeks ago, and to eneter your caption for this week's contest. 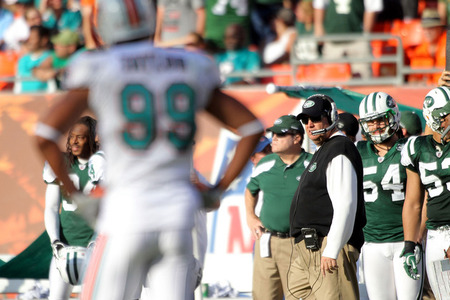 And, our winner was, none other than Little Nicky 21:

Also, rex ryan is in the picture..

This week, we take a look at New England Patriots quarterback Tom Brady punting the ball against the Denver Broncos. The quick kick came on third down in this past weekend's Divisional Playoff game. So, your challenge is to caption the picture with what the Broncos, fans, you, commentators, anyone was thinking as Brady punted the ball.

If this week's picture strikes that creative nerve, leave your caption below in the comments. If you find a caption entry that you really like, click on "actions" then "Rec" at the end of the comment. That's it.