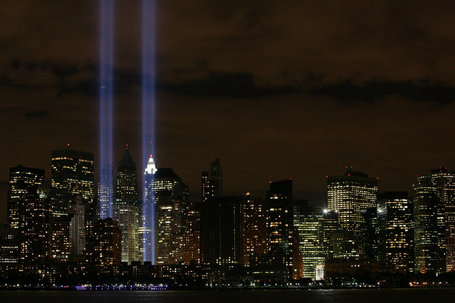 Ten years ago today was one of those days that will forever be etched in our memories.  No matter where you were, or what you were doing, you can remember exactly what was happening when you heard/saw/felt the events of September 11, 2001.  As our own Phinsider tribute to the thousands of men and women who died on that senseless day, I have asked some of the Front Page contributors to the site to share with us their recollections of that dark day.

"Like everyone, I'm sure, 9/11 remains a very vivid memory for me.  I was going to FSU, and my roommates woke me up in a panic.  I remember walking down the hallway, and seeing the TV from a distance in the living room, and my jaw dropped.  The first plane had just hit, and no one was sure what was happening - we just knew it wasn't good.  After the second plane hit, we knew thie was a day none of us would EVER forget.  My buddies and I sat there in front of the TV from about 9am until 2am, just amazed by the coverage.

"I'm so proud to be an American, and I'm so proud of the men and women who serve this country - including your very own new Phinsider blog leader Mosul.  God Bless those families that lost a loved one in those buildings, and may thus Sunday be a day of celebrating those lives lost."

"Every generation has their "I know where I was when..." moment. For some, it's Pearl Harbor. For others, it's the assassination of JFK. For my generation, it was obviously 9/11. And perhaps because of the proximity of lower Manhattan to my town where I was born and raised, I can recall that day's events - and the days/months that followed - like it was yesterday.

"I was a senior in high school - ironically enough, John F Kennedy Memorial High School - that fateful morning when an announcement was made over the school's PA that an airplane had flown into one of the Twin Towers. Moments later, a second announcement was made regarding the second plane hitting the other tower. But we weren't told right away (probably because the news didn't report it yet) that these were the acts of terrorists.

"First block (we had 4 blocks/day rather than 8 periods) ended at 9:17 am. My second block class was gym. Not knowing the extent of what was going on, I went to gym class. We were to play softball outside that day. But while organizing teams for the day, we saw three military fighter jets fly directly overhead - presumably en route to NYC. That was all I needed to see. I headed back into the locker room, got changed, and left with a couple friends.

"We got to a buddy's house and turned on the TV just before the first tower collapsed. Minutes later, the second tower went down. Stunned disbelief would be an understatement. I don't think any of us could comprehend what we were watching.

"After watching the news for a little while longer, we decided to drive over to the mall. No - we weren't shopping. One of the entrances to the mall's parking lot in my town is up a big hill. From that hill, you were able to see the two World Trade Center towers. But on this tragic morning, all there was to see was a giant cloud of dust and smoke. That was the moment it got real for all of us in my car, I suppose.

"We obviously weren't alone up on that entrance road to the mall. It was well known for having a great view of the World Trade Center. One man was up there with his son - no older than 5 or 6, I'd guess. The man just stared at the smoky sky, speechless. Then as he was leaving, he turned to us and said, "Do you fucking believe this?"

"The following April, a few friends and I went to NYC for the day during our Spring Break. It was the first time any of us would have been in the city since 9/11. It also happened to be when the city had put up those Twin Lights for the first time as a memorial where the towers once stood. Standing there at Ground Zero and looking up at the two beams of light shining into the heavens, you really didn't know what to think; what to feel.

"Ten years later, I still don't - which I think pretty much sums it up."

"I was just starting my senior year of high school in September 2001, and like many 17-year-olds, my thought pattern at that point was a shallow, never-ending cycle of guitars, girls, football, my car, etc. All of that changed on a warm Tuesday morning, however, as I began to comprehend what was happening in New York City on that day, Sept. 11, 2001

"That morning was very much typical for me, living in a suburb just outside of Chicago, until I first heard about a plane crashing into the World Trade Center at the beginning of third period that day. I initially assumed it was just an accident, and likened the event to a story I had read as a child about a small plane that crashed into the Empire State Building. Soon after hearing the initial news, we were told that a second plane had just flown into the World Trade Center, and I knew then that these were no accidents involving small planes.

"Students in my Contemporary Literature class started to panic a bit ... and then a lot. It was then that my teacher turned on the classroom television, and that was the first time I was introduced to the horrific visual of the Sept.11 terrorist attacks. It was like something you'd see in a high-budget Arnold Schwarzenegger film, but there was nothing fiction about this, and the images made me feel confused, scared, and then physically sick. I had never seen a skyscraper on fire, and to see the Twin Towers absolutely engulfed in smoke was just horrific. Honestly, I'd give anything to un-see the death and destruction that took place in the New York City skyline that morning. To this day, seeing those images, and also the footage of the Twin Towers collapsing later that morning, just makes me cringe.

"A few class periods later, we learned the Pentagon had also been attacked, and then we heard about the passenger revolt that had taken place on a hijacked airplane flying over Pennsylvania. At that point, I honestly didn't know what to expect next, and I spent the rest of the day just praying that no other attacks would occur. Thank God, they didn't.

"Amidst all the anger and paranoia I felt in the weeks and months following the Sept. 11 terrorist attacks, I saw something that actually made me feel as if everything was going to turn out all right. The United States of America is built on a phenomenal, unshakeable foundation of pride, hope, trust and goodwill, and those values were fully on display throughout the rest of 2001 and much of 2002. Americans were able to put any many of their differences aside, support each other, unite and stand up against an enemy who had brought unprecedented level of grief, shock and pain to each and every citizen of this country. Americans were there for each other-hugging, pounding fists, exchanging high fives, whatever-and it was an amazing thing to see. I will never, ever forget it.

"Together we stand, divided we fall."

I really want to say thank you to all of these guys.  It's not an easy thing to try to go back and feel those feelings again.  I am glad they were willing to do so.  Please feel free to share your own story below.

[UPDATE: Head to SB Nation's Memorial Remembrances page to see my story, as well as that of some of the other NFL bloggers memories.]