The Case For Chad Henne and the Long Ball - Part 2

Share All sharing options for: The Case For Chad Henne and the Long Ball - Part 2

Don't ever say I don't listen to the readers of the Phinsider.  Since, apparently comparing Chad Henne to the only three quarterbacks that the Dolphins have to face twice every year did not appease the debate over Henne and the long ball, I got comments like these:

There are so many things wrong with this post...  by Altersreality

How about you set up a chart analyzing Henne with the rest of the league instead of the AFC East which is only known for one QB.

You placed Henne next to mid tier QB and he did not distinguish himself so what does that tell you?

I’m still waiting for your answer to my post. I didn’t say he had a problem from 1-20 yds. Why post them in your answer? Was it so you could build Henne’s stats up? How did you pick Sanchez and Fitzpatrick? Are they representative of above average QB’s in the game?
It wasn’t fair to Henne to include Brady in the mix either. 4 successful QB’s in the NFL was all that was required. The case for "Chad Henne and the LONG BALL" has still not been stated.

Since I need to pick out 4 "successful" QB's in the NFL (I would have thought a Hall of Famer and the quarterback who has led his team to the AFC Championship game each of the last two years would cound as "successful" but I guess not), here's part two to my Confessions....or to Chad Henne and the Long Ball.

Even though Truth Warrior doesn't understand why I would pick the 1-20 yard passes in my post, I'm going to use them again.  I feel that they show how a QB does in all aspects of his game - not just a random look at one set of completions.  If a QB throws one ball over 41 yards and completes it, that's a 100% completion percentage.  Is that the same as a guy who goes 4-for-8?  No.  So, if I show how accurate he is through all of his throws, it sets up the case a little better.

Not knowing what quarterbacks would "provide the answer to [Truth Warrior's] post," I selected four playoff quarterbacks.  They include Drew Brees, future Hall of Famer Peyton Manning, the common "wish the Dolphins would have selected him instead of Jake Long" Matt Ryan, and Jay Cutler.

Same format as Part 1, but different camparison QBs in the mix this time.

With that, here are the behind the line of scrimmage

First observation here is, Brees threw behind the line of scrimmage A LOT! I'm going to assume a good number of those passes were to running back Reggie Bush, which could be a good thing for Henne.  Second things is, Manning is abnormal.  Who has a 90% completion percentage any where? Henne actually falls into fifth place in completion percentage at this range, but he is comparable to both Ryan (2 more completions on 1 fewer attempt) and Cutler (1 fewer completion on 4 fewer attempts) when you really look at it.

Once again, we see Henne in last place in completion percentage, but it's not a big jump from Ryan's 69.3% or Cutler's 69.2 to Chad's 65.0%.  Brees and Manning again show why they are some of the top QBs in the league, joining Tom Brady (see Part 1) in the 70%+ completion percentage.

At this range, Henne actually moves up to first pace in completion percentage.  Both Brees and Manning drop back down to mortal levels, while Cutler actually falls below 50%.

On to the longer ranges, starting with 21-30 yards:

What surprises me here is how far Manning fell.  Brees continues to stay among the league leaders here (although, Brady was at 52.9% at this range), while Henne falls smack in the middle of this group.

As I said this morning, this is probably Henne's most difficult range.  Interestingly, however, is how little Ryan and Cutler attempt deep passes.

Of the eight quarterbacks considered in these two posts, only Mark Sanchez attempted more passes over 41 yards than Brees, and both ended up completing just one.  The completion percentage at this range becomes a crap shoot.  Interestingly, however, the two sure-fire Hall of Famers, Brady and Manning, both failed to complete a pass past 41 yards, with Brady going 0-for--6, while Manning went 0-for-1.

Now, to compare the accuracy of each of the playoff QBs with Chad Henne, here's the associated chart and graph: 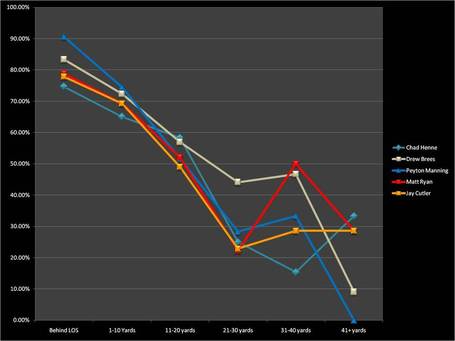 From this comparison, it still shows Henne is comparable to even "successful" QBs in the league - unless these guys still don't meet that criteria.

Once again, does this mean Henne will be great?  No.

Does it mean maybe he isn't as bad as a lot of people seem to want him to be?  Yes.

With the addition of Reggie Bush, and Brandon Marshall and Henne working to repair their dysfunctional relationship, Henne's potential could be reached this year.