The Case for Chad Henne and the Long Ball

Share All sharing options for: The Case for Chad Henne and the Long Ball

Last night there was a discussion about Miami Dolphins' quarterback Chad Henne andd his inability to throw the long ball.  He was described as "insanely inaccurate on the deep ball," here on the site by Joel311.  In fact, this comment by Truth Warrior is what made me think about this post:

So now Henne is an above average QB, right?

Please put up some stats of Henne’s completion percentage beyond 15 yards. He still can’t put the ball in a receivers hands in full stride. He’s done it 2 times that I remember. Once to Ted Ginn and once to Brian Hartline. Two completions do not a career make. Does anyone think that the Pats, Jets, Steelers, etc. are concerned about Hennes deep game. He doesn’t have one. He remains a limited player in a game that requires a full compliment of talent. Reggie Bush was a surprise, I was very impressed with his game. His offense was probably the reason the running game and Hennes passing was successful. You are sadly mistaken if you think that Henne is the answer.

So, I'm going to do exactly as Truth Warrior asked.  Let's take a look at Chad Henne's 2010 numbers and compare them to the other AFC East quarterbacks.

We'll start with passes thrown behind the line of scrimmage and build from there.

Basically, from the "Passes behind the line of scrimmage" category, we can see that the New England Patriots are freaks, gaining 512 yards, or a 7.21 yards per attempt average, from behind the line of scrimmage passes.  Henne comes in second in the yards per attempt and in quarterback average.  He also has the second highest completion percentage behind Brady.

But, this isn't what we want to discuss.

Again, Brady is in his own realm.  He out gained Henne by three hundred yards, who out gained Sanchez by another three hundred yards.  Henne was also second in completion percentage and quarterback rating behind Brady.  He did lead the four quarterbacks in interceptions at this range, doubling his closest competitor, 10 interceptions to Fitzpatrick's 5.

Now, we are getting to the longer range passes, with the 11-20 yard category.

Henne jumps into the lead in completion percentage at the 11-20 yard range.  He trails Sanchez by two hundred yards gained herre, and he is third in QB rating, mostly due to his low touchdown numbers here.  He also is tied with Fitzpatrick for the second highest interception count, one behind Sanchez's seven.

Henne falls to third in this range for both completion percentage and passer rating, behind the ridiculous numbers of Brady. Although Brady only took 17 shots between 21- and 30-yards, Henne's longest pass was just 34 yards; in the 21-30 yard category that's just sad.

As the ball travels further through the air, Henne's numbers go down some more. For the 31-40 yard range:

This is probably the range Henne has the most difficulty with; some of it may be Henne, but a part of it is probably also the lack of a deep threat last season, and the conservative nature of former offensive coordinator Dan Henning. Fitzpatricck suddenly springs to life on the deep ball, here, finishing just behind Brady in completion percentage, touchdowns, and passer rating.  Henne's bring up the rear across the board here, with an anorexic 15.4 completion percentage.

And the final category is the 41+ yard range.  Hene acquits himself well here:

For the longest pass category, Henne beats everyone in just about every passing category, with Sanchez claiming the passing yardage lead with this one 74-yards pass.

To get a better understanding of the accuracy of each quarterback, consider the following chart and graph: 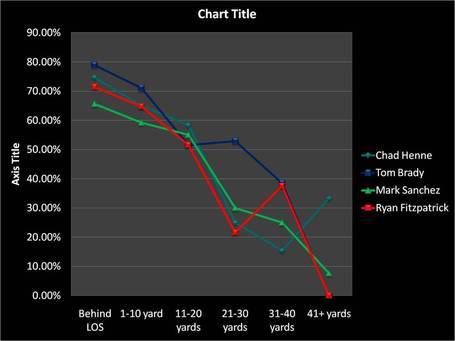 What should be plainly obvious is, Chad Henne is right in the middle of the pack with the rest of the AFC East.  Sure, Tom Brady, a future Hall of Famer, is often the top quarterback in the division at each range, but Henne is often the second best.  He does fall behind Mark Sanchez at the 21-30 yard and 31-40 yard mark, but he's still performing as a average quarterback. I wouldn't categorize Henne's 2010 performance as "insanely inaccurate on the deep ball" - but maybe I just need to wake up and stop looking at the actual numbers Henne puts up.

Will Henne perform at Brady's level?  Probably not.  But, could he out perform Mark Sanchez, who has led the Jets to the AFC Championship game each of the last two year?  He already does.

With the addition of Reggie Bush, and Brandon Marshall and Henne working to repair their dysfunctional relationship, Henne's potential could be reached this year.