The Miami Dolphins dominated the Oakland Raiders this past weekend, winning the game 34-14. And, it should never have even been that close. The Raiders were shut down by the Miami defense all day, being held to just 152 yards through the first 52 minutes of the game. However, in the last 8 minutes, the Raiders were able to double their offensive showing, gaining another 152 yards, and adding the two touchdowns - thanks to an extremely soft, prevent defense.

But, that's not the point. The point is, the Dolphins defense came out and decimated a division leading Raiders team. The Raiders came in to the game as the 4th ranked rushing attack in the league. They left Miami with a grand total of 46-yards on the ground.

The defense was simply amazing. Now, we take a look at five of the best plays from that defense last week. 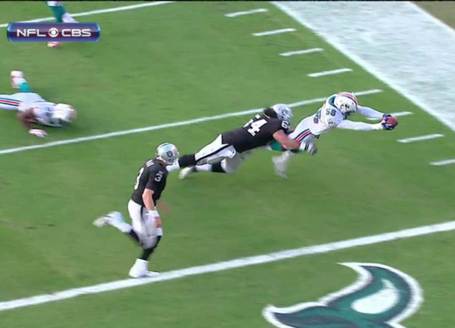 Late in the third quarter, the Raiders were trailing 27-0, and looking for a spark to get anything going. Dolphins quarterback Matt Moore had just run for a touchdown pass, and the Raiders were setting up on their own 20-yard line following the Dan Carpenter touchback. On first-and-10 from the 20, Raiders quarterback Carson Palmer dropped back for a pass, only to throw an incompletion intended for tight end Kevin Boss. On second down, Palmer again dropped back, this time looking for wide receiver Louis Murphy. However, Palmer floated the pass behind Murphy, who deflected the ball into the air, where Boss then tips it, and linebacker Kevin Burnett came down with it. Burnett ran through the Oakland offense, scoring a touchdown on a 34-yard interception return, and giving the Dolphins a 34-0 lead. 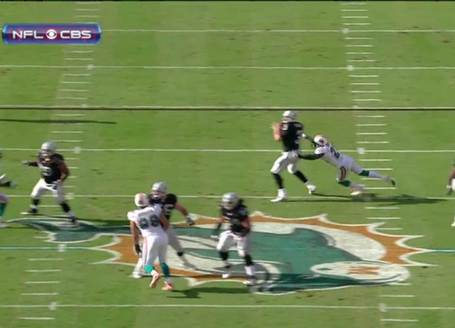 With two minutes to go in the first half, the Dolphins were forced to bring punter Brandon Fields into the game for the first time. Fields kicked the ball 53-yards to the Oakland 17, where wide receiver Julius Pruitt downed the ball. From there, the Raiders took over, trailing 13-0. On the first play of the drive, Palmer looked deep, finding wide receiver Chaz Schilens for 16-yards. Palmer went to Schilens on the next play, gaining another 30-yards, before a holding penalty wiped out a 14-yard Palmer pass to wide out Darrius Heyward-Bey. With the ball at the Dolphins 47-yard line, Palmer looked deep down the right sideline for T.J. Houshmandzadeh, but the pass was incomplete.

As that play ended, the commentators began talking about Oakland kicker Sebastian Janikowski. The Raiders, they were saying, were already within Janikowski's field goal range, especially with the tail wind the Raiders had at that moment. However, Dolphins cornerback Vontae Davis had other ideas in mind. On the next play, as Palmer dropped back to pass, Davis came on a corner blitz, cutting through the line and getting a clean shot on Palmer. The sack dropped the Raiders back seven yards, and resulted in, following another incomplete pass, a Shane Lechler punt rather than a Janikowski field goal. 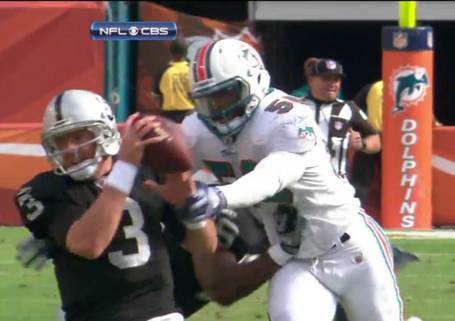 The start of the second quarter began with the Raiders moving the ball, having started at their own 20-yard, now with first-and-10 at their own 48. After a 10-yard penalty for intentional grounding to open the quarter, followed by a negated 17-yard pass due to another Oakland penalty, this one a holding call, running back Michael Bush gained 1-yard on a left tackle run. The next play saw Palmer drop back, looking for Boss across the middle, only to have linebacker Karlos Dansby intercept the pass and return it 13-yards - only for the play to be negated by an illegal contact penalty on Burnett.

With the original call on the field of illegal contact on Karlos Dansby, and fans trying to figure out who Dansby contacted, the Raiders ran two quick plays: a Pamer incompletion intended for Heyward-Bey, followed by another 1-yard run by Michael Bush. At this point, the illegal contact penalty was credited online to Burnett, and the linebacker quickly made everyone forget about that call. On third-and-nine from the Oakland 35-yard line, Palmer dropped back to pass. Burnett blitzed straight up the middle, timing his run perfectly. Michael Bush attempted to pick up Burnett's blitz, but got picked by Palmer's drop back - and Burnett easily slid through the block, wrestling Palmer to the ground. 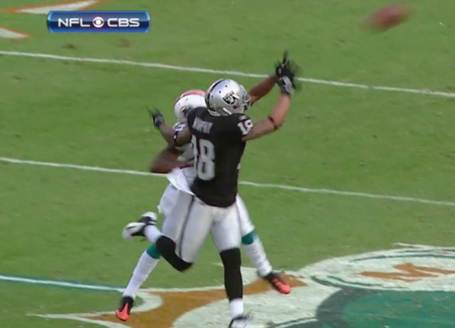 After watching the Dolphins' Clyde Gates return the second half kickoff 77-yards, followed by a three play touchdown drive (Reggie Bush 1-yard run for the score), the Raiders were trailing 20-0, and looking to start the second-half better than the first. Starting with the ball at their own 20-yard line, the Raiders were able to move the ball 11-yards before they lost their momentum. On 3rd-and-10 from the 31, Palmer dropped back after two straight incompletions, looking to get the team moving again. With Murphy running a post route, Palmer looked to gain the first down. However, cornerback WIll Allen stayed with Murphy step-for-step, and turned to look for the ball along with Murphy. Allen put up his hand and knocked the ball away from the receiver, ending another Raiders drive, with punter Shane Lechler returning to the field to punt on the next play. 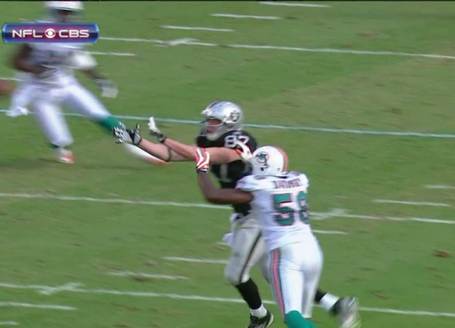 With about 8:30 to go in the second half, the Raiders were trying to find any way to get something started. Having just received the kickoff following a Davone Bess touchdown to put Miami up 13-0, the Raiders had actually moved the ball into Miami territory. With 6:39 to go in the half, Palmer looked toward tight end Boss to get the team moving. The Dolphins, having struggled over the past few years covering tight ends, were looking to continue dominating Palmer's passing attack. Looking short, Palmer attempted to deliver the ball to Boss, who had gained a step on linebacker Karlos Dansby when Dansby looked to slip for a second on the turf. But, Dansby wasn't going to be beat, closing in on Boss as he tried to catch the pass, pulling away the tight end's left arm before he could complete the reception. The ball fell to thr ground, and, following another incomplete pass to Boss, the Raiders were punting again.