Share All sharing options for: Miami Dolphins Running Back Reggie Bush - Guess He Really Is an Every-Down Back

No single player has frustrated Miami Dolphins fans this year like running back Reggie Bush. And, it's not even Bush's fault that fans are frustrated. It was the system and the play calling. The Dolphins were determined to prove Bush was an every down back, and were running him, every down, straight up the middle. It wasn't working.

But, something changed. Somewhere along the line, Bush became effective. The play calling opened up a little more, and Bush took advantage. Suddenly counters, end-arounds, and off tackles were in vogue, which opened up the middle for Bush. By going away from the traditional "feature" back running between the tackles, the Dolphins found their feature back.

Bush has demonstrated his lack of fear of contact. In yesterday's game against the Oakland Raiders, Bush was looking to deliver the hit, rather than take it. He was running toward defender, rather than running out of bounds. In the third quarter, Bush was given the ball on a right end run from the Raiders 33. He broke through the line, running down to the Raiders 15-yard line, where, rather than stepping out of bounds, Bush turned back into the Raiders' Tyvon Branch. Branch actually came up after the play, yelling at Bush for the hit.

Unfortunately, the play was called back due to a Mike Pouncey holding penalty. 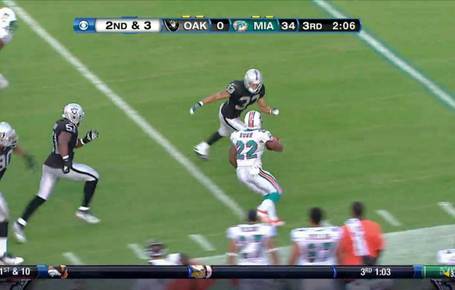 But, it still shows, Bush will look for the hit, rather than scamper out of bounds.

When the Dolphins made the trade for Bush, bringing him from New Orleans to Miami, there was a lot of excitement for the former USC Trojan (and Heisman Trophy - possessor?) coming to the Dolphins. There were dreams of what Bush could add to an offense desperately in need of explosiveness.

There were also questions about why the Dolphins would trade for Bush rather than go after Darren Sproles. Those questions deepened as Bush struggled to start the year, but Sproles succeeded as Bush's replacement with the Saints. The frustration grew every time Bush ran into a defensive tackle and gained no yards.

But those questions seem to be gone now. Bush ran for 100 yards yesterday, his second time eclipsing the century mark this season. That's also the third time he has done it in his career. Bush also set a new career-high in rushing yard in a season, now sitting at 667 yards. His previous season total was 581 in 2008, his second year in New Orleans.

Bush is currently on pace to reach 889 yards on the season. And, the remaining 222 yards required to reach that total will come from a bruising, looking for contact, every down, feature running back.