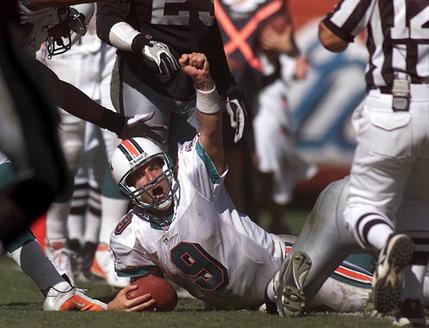 Ten years ago, the Miami Dolphins hosted one of the most memorable games against the Oakland Raiders ever. To make it even better, this was the first Dolphins game I attended. Perfect timing!

This game took place on Septemeber 23, 2001 - the return of football after the September 11th terrorist attacks. Everyone was still reeling from the attacks, and football was an escape from the reality of the world. I was sitting in the first row of the upper deck, on the 50 yard line - American flag draped over the railing, and loving every minute of the whole thing.

The Dolphins defense was dominating in 2001. Just think, this was the prime of Jason Taylor and Zach Thomas' careers. This was Brock Marion, Patrick Surtain, and Sam Madison. This was the strength of the team.

But, it wouldn't be what was remembered from the game.

"You had to wipe the tears away and play football," Taylor said after the game. He was not the only person wiping away tears that day.

Even the typical boos and jeers for the visiting Oakland Raiders were less vocal than normal. Everyone was just ready to share the moment and the game. Oh, and those jeers did change to cheers for one Raiders player - Jerry Rice. Rice would finish the game with just one catch, but the entire stadium did recognize the greatness that was on the field.

Once the game really started, the defenses for both teams dominated, with the Raiders' defense picking off two Jay Fiedler passes. The second interception came early in the fourth quarter, giving the Raiders the lead, and control of the game. It looked like the Dolphins were done, with Oakland leading 15-10 with 1:41 left in the game.

But, Fiedler had other ideas. With no timeouts, the quarterback completed his first four passes of the drive, moving the Dolphins from their own 20-yard line to the Oakland 18-yard line. With the ball on 4-and-3, the Raiders were ready to celebrate their win. Fiedler, however, calmly connected on a 9-yard pass to Dedric Ward, and the drive continued, setting up first-and-goal from the Oakland 9-yard line. The crowd was going nuts, watching what could happen. Was it possible Fiedler, one of the most embattled quarterbacks in Dolphins history - simply because he was the guy who replaced Dan Marino - could lead a comeback?

The next play, Fiedler scrambled for 7 yards, then quickly rushed everyone to the line and spiked the ball. The Dolphins, down by 5, were 2-yards away, with 12 seconds to go in the game.

Third down, 2-yards, and 12 seconds. That was the task. And, Fiedler responded. "I saw that patch of grass in front of me, and I knew I could make it," Fiedler said after the game. The play was a designed bootleg from Fiedler, who couldn't find anyone open in the endzone. Fiedler pump faked a pass, and took off for the endzone. Standing between him and pay-dirt was longtime Dolphins defensive end Trace Armstrong.

"I tried to turn him into the middle of the field," Armstrong said. "But he did a great job of getting away from me and getting into the end zone."

Fiedler dove for the endzone, with the crowd erupting as the refs hands went up in the air. The Dolphins had done it. Fiedler had done it. On the first game after 9/11, with a packed stadium, the Miami Dolphins had provided the fireworks, and a "W." It was perfect.

"We ran a play that was really our two-point play so in that situation that was the play we thought we'd have the most success with from the 2 or 3-yardline," Fiedler explained later. "I knew going into that play we would have had enough time for two plays if I threw an incompletion. It was a bootleg out to the right with a number of different options to throw the ball, with a fourth option being for me to run the ball.

"I came out of the pocket and James McKnight and Oronde Gadsden were both working the back end of the end zone and Hunter Goodwin, our tight end, was working the front end of the end zone," Fiedler continued. "I thought for a second I might have had a window to throw to Hunter but didn't pull the trigger on it and as I continued to roll out to the right side I got some pressure from Trace Armstrong coming up the field.
"As I avoided the pressure I just saw the daylight of the goal line and knew once I turned it upfield I was going to be able to get into the end zone before the defenders peeled off and got there. It probably looked a lot closer on film than it looked in my head and thankfully I was able to make it there and dive across the goal line at the right time."
The moment was captured forever on the cover of Sports Illustrated magazine, a cover still seen as one of the magazine most iconic in its history. "I've still got plenty of them," Fiedler told MiamiDolphins.com recently. "I think my dad ordered 150 copies right after that. All the newsstands in Oceanside, N.Y. were sold out pretty quickly."