Despite another Miami Dolphins loss to the New England Patriots this past Saturday, there were several defensive plays that stand out. As usual, today we take a look at the Gillette ProGlide top five defensive plays from the previous game, before you vote for your favorite. 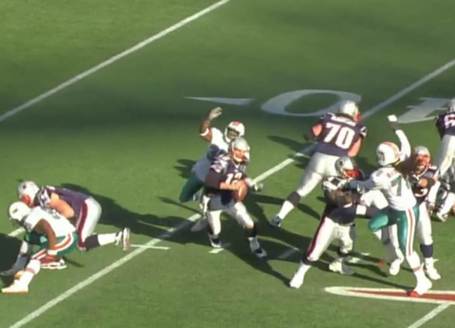 One of the keys for a Miami victory this week was to get pressure on Patriots quarterback Tom Brady, and keep it there. The Dolphins started the game doing just that. On their first possession, the Patriots were looking to answer an opening drive field goal from the Dolphins. After getting the ball at their own 13-yard line, the Patriots moved up their side of the field behind several run plays, and a 16-yard completion to Wes Welker. On 3rd-and-8, from their own 48-yard line, Brady took the snap with 7:41 left in the first quarter. Out of the shotgun, Brady barely had time to complete his drop when Dolphins safety Yermiah Bell, coming off a blitz from the defense's right side, climbed up his back and brought him down for a six-yard sack. The Patriots were forced to punt the next week. 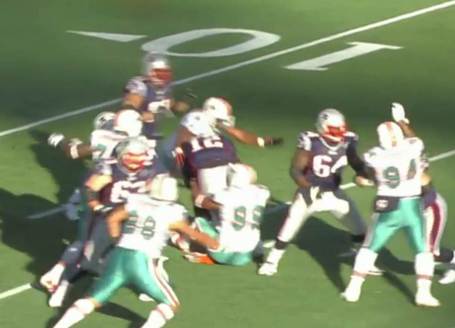 After holding the Dolphins to one first down, followed by a punt, the Patriots once again got the ball, looking to change the 3-0 score line. On 1st-and-10 from their 21-yard line the Patriots lined up with eight players on the line of scrimmage, including tackle Nate Solder who reported as an eligible receiver. Brady, under center, took the snap and dropped back into a seven-step drop. Following a play action fake, Brady looked into a quickly collapsing pocket, with Kendall Langford immediately in Brady's face. As the quarterback looked to move around Langford, a hard charging Jason Taylor wrapped up Brady, and brought him to the ground, with Cameron Wake coming in at the end of the play, just to remind Brady that he was there too. The sacks was the 139.5th of Taylor's 15-year career, putting him two behind Michael Straham for 5th all time. The Patriots would go three-and-out on the drive. 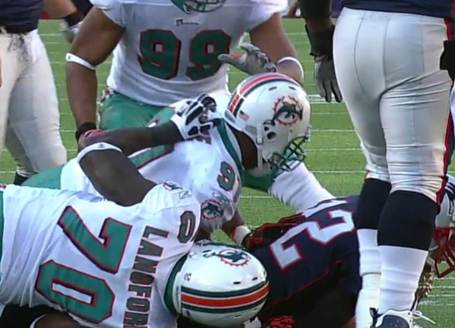 After Taylor's sack, you knew it wouldn't be long before fellow linebacker Cameron Wake would want to get in on the action. With the Dolphins leading 17-0, and the second quarter clock winding down, the Patriots once again forced the Dolphins to punt, putting the ball in Brady's hands with 3:57 left in the half. On first down, Brady scrambled for 1-yard before being tackled by Karlos Dansby. Second down saw Brady throw incomplete to Aaron Hernandez. On 3rd-and-9. Brady was once again in the shotgun, looking to keep the drive alive. The Dolphins were constantly moving before the snap, disguising where the pressure would come from. Will Allen blitzed from the defense's left, Jason Taylor, who originally lined up on the right side of the defensive line, came across and up the "A-gap" on the left. Brady looked to find a pocket, found nowhere to go, and Wake, who had been on the left side, around whom Allen blitzed, found himself directly behind Brady. The quarterback ducked as Kendall Langford added pressure directly up the middle, only to have Wake grab him from behind. As the linebacker got up to celebrate his sack, instead of his typical celebration, he modified it to start with Taylor's sack celebration. The Patriots punted the next play. 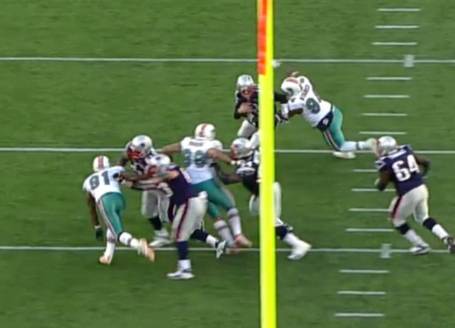 After squandering their 17 point lead in the third quarter, the Dolphins defense was reeling, and trying to find a way to stop Tom Brady from breaking the 17-17 tie mid-way through the fourth quarter. The Patriots had taken possession of the ball at their own 2-yard line after a Matt Moore interception. Brady immediately went to work, finding Rob Gronkowski and Wes Welker on consecutive first down plays to move the ball 26-yards. After a 5-yard scramble, Brady handed the ball to rookie running back Stephen Ridley for a 5-yard gain before returning to the air. Over the next three plays, Brady threw an incompletion, followed by a 42-yard pass to Wes Welker (which, incidentally, gave Brady his career single-season high in passing yards, after he got his career single game high against the Dolphins in Week 1), a 4-yard Ridley run, and another incomplete pass. The only thing seeming to slow the Patriots attack were penalties, as Aaron Hernandez was called for a false start before the Welker pass, and Gronkowski was flagged for an illegal formation penalty after the Ridley run. On 2nd-and-15, Ridley was once again handed the ball, gaining 5-yards back to the Dolphins' 19-yard line. On 3rd-and-10, Brady once again lined up in the shotgun formation, only to have defensive end Randy Starks abuse former Dolphin Donald Thomas, and come in for the sack. With the 10-yard loss on the play, the Patriots had to settle for a 42-yard field goal, to give them the 20-17 lead. 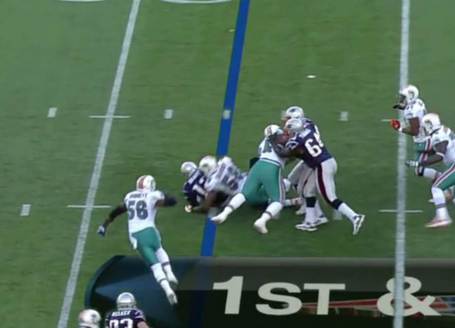 The sack fest in this week's defensive plays ends at number 5, with the Karlos Dansby tackle on a 1-yard scramble by Tom Brady, as was talked about up in the Cameron Wake sack write up. As you can see in the picture, with the blue line being the line of scrimmage, it's as close to a sack as any "1-yard scramble" can be. Dansby should have had a sack, but as Brady fell, he managed to fall forward and over the line of scrimmage.

Which one of the nominees do you think was the Gillette ProGlide defensive play of the week?