Share All sharing options for: Miami Dolphins Caption This - Week 16

After last night's random live thread, it's time to continue our break from the reality of another poor Miami Dolphins season with the NFL Week 16 Caption This contest. Each week, we try to come up with an interesting photo from the most recent Miami Dolphins game, and run a photo caption contest with it.

This week, we take a look at the Dolphins' game last Saturday against the New England Patriots.

But before we get to the picture, we first have to take a look back at last week's winner. First the picture: 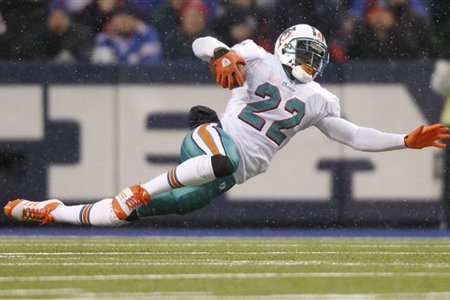 Brantner78 backed up his Week 14 win by repeating in Week 15. His winning caption:

"Five minutes after this picture was taken, it was confiscated by the NCAA. Apparently, he is also not allowed to POSE like the Heisman..."

I'm also going to put in an honorable mention caption this week, because it was the last caption added, and I'm sure a lot of you all didn't see it, but I really liked it. With that, the honorable mention goes to TheLikeMy with the caption:

"The analysts all said it would be a cold day in hell when Reggie Bush broke the 200 yd rushing mark. I didn't realize Hell was in western NY"

This week, we take a look at Patriots' quarterback Tom Brady sitting on the ground after being sacked by the Dolphins in the second quarter of the game. Which made me wonder, what's going through Brady's mind?