Coming off a humiliating loss against the Philadelphia Eagles during week 14, it seemed as if the Miami Dolphins might have lost all of their momentum. They certainly had to face a few obstacles coming into last Sunday's game against the Buffalo Bills. The Dolphins had lost their head coach and their best offensive linemen, and no one knew if they were able to overcome these tough challenges.

On Sunday, the Dolphins came out with offensive and defensive power force, scoring 3 touchdowns from outside the "Dead-Zone" and coming out with 3 interceptions. Most of you would have liked to see a breakdown of Reggie Bush's 76-yard run to the house, or Brandon Marshall's 65-yard TD catch. However it was Anthony Fasano's 22-yard Touchdown that gets to be broken down today, enjoy. 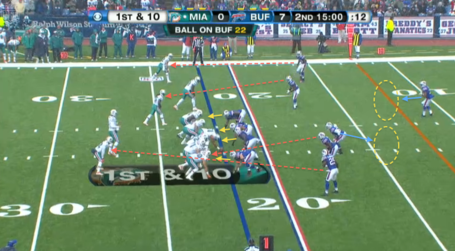 The Dolphins come out in a Shotgun, Trips left formation with Brian Hartline lined up as the farthest receiver to the left, Brandon Marshall lined up closest to the line of scrimmage to the right of Hartline, and Davone Bess lined up as the slot receiver. Miami also had Reggie Bush line up next to Matt Moore and Anthony Fasano lined up next to Marc Colombo. Indications show that the Dolphins are either calling a quick screen to the left, a dump off pass to Reggie Bush, or a draw play. The formation alone is one of they crucial components on why this play works because it confuses the defense, which eventually causes one person to be open. But more from that later.

On the defensive front, the Bills come out in a 4-3 under defense, however, instead of bringing in a second or third linebacker, the Bills bring out cornerback, Drayton Florence, and safety, Bryann Scott, to help out on the right side of the field. As for assignments, Buffalo has Drayton Florence playing man coverage on Reggie Bush, Bryann Scott playing man on Fasano, Nick Barnett playing shallow zone between the 20 and 15, Justin Rodgers playing man on Davone Bess, Aaron Williams playing man on Hartline, and finally Jairus Byrd playing a deep zone coverage.

**NOTE: As for Miami’s offensive assignments, both Brian Hartline and Brandon Marshall will be running "Go" routes, Davone Bess will go left for a quick screen, Reggie Bush will be running a Comeback route, and lastly Anthony Fasano will be running a "Post-Out" pattern. And so the play begins. Also, notice the deep coverage that Aaron Williams has on Brian Hartline. This turns out being another key on making this play work. 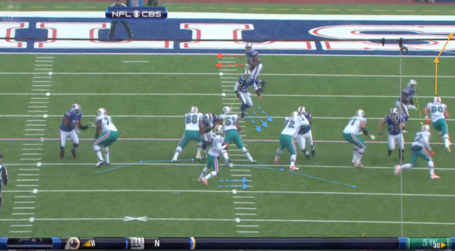 On this zoomed-in image of the snap you can see 3 keys on what makes this play work out.

**NOTE: Miami does an excellent job at the line by effectively blocking all four rushers on the play.

FRAME 3: The Snap (Zoomed Out) 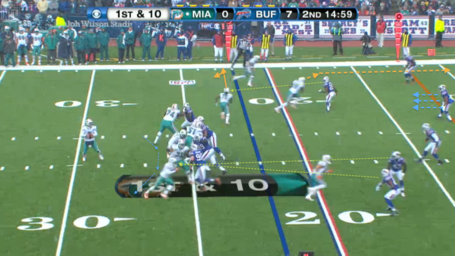 This is the zoomed-out version of the last frame. Once again you can see how Bryann Scott is now slowly drifting away from his coverage on Fasano and eying down Reggie Bush’s route. This is a completely inexcusable situation for Scott. The most plausible explanation someone can give for this blown coverage is either he thought Drayton Florence was playing man on Fasano or he thought that George Wilson would have the backside covered.
Speaking of George Wilson, unlike Bryann Scott, he did have a perfect understanding of the type of coverage each player was playing, and once Davone Bess went sprinting to the left side, he knew that Justin Rodgers would be racing after him as well, leaving one-on-one coverage between Jairus Byrd and Brandon Marshall. Unfortunately, Jairus Byrd was never playing man coverage, he was playing zone, but more from that later. 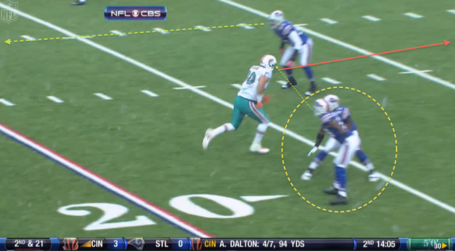 Here we have an in depth view of the confusion of Bryann Scott. However first let’s take a look at what Nick Barnett was doing during the confusion. Barnett seems to be extremely focused on the eyes of Matt Moore; so focused that he didn’t even notice the 255 lb. TE just race right passed him. As an experienced linebacker, Barnett has to know where the receivers, especially when playing zone coverage.

Now we get to the blown coverage part of the post. Bryann Scott finally was able to completely drift away from coverage and follow the footsteps of Reggie Bush, leaving Anthony Fasano completely free to get open. In a split second, both Bryann Scott and Drayton Florence were able to notice the confusion on the play and looked back at Fasano. Unfortunately for them, it was already too late. 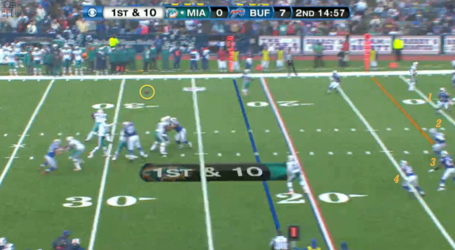 Once the ball was thrown, there were 1, 2, 3, 4 players lined up around the first down marker playing zone coverage. But wait, if there are 4 defenders covering 0 players, shouldn’t there be more than one player wide open?

From what I mentioned before, there was a domino affect from the type of coverage the Bills were playing on the left side of the field. Let’s look at this affect by order:

All of this later translates into 4 defenders being left alone at the 15-yard line, and two of Miami’s best receivers left in the end zone being covered by one Safety. 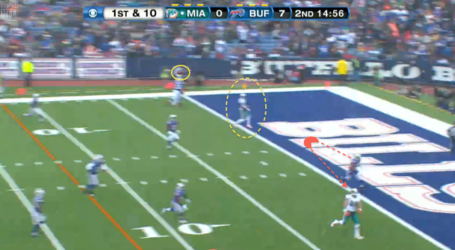 As you can see, George Wilson hesitated in the end zone. At first, he stayed his course throughout his zone coverage, waiting for Moore to make his throw to Brandon Marshall. However, once he saw that Anthony Fasano was left wide open (due to Bryann Scott) he had to turn his body around and race about 13 yards to reach the quick TE. He was too late, however, and Fasano was able to catch seemingly the easiest touchdown of his career.

P.S: Did anyone else think for a second that the ball had sailed over the head of Fasano?