After an excruciating loss against the Eagles on week 14, the Miami Dolphins looked to bounce back against the Buffalo Bills who took a turn for the worst after starting off as one of the best teams in the NFL. Miami had an outstanding defensive performance on Sunday that was visible on the very first drive when Cameron Wake sacked Ryan Fitzpatrick for a loss of 10 yards. In total, Miami racked up 3 sacks on the day, 8 QB hits, 4 tackles for loss, and an astonishing 3 interceptions. Let’s take a look at the big defensive plays of the game. 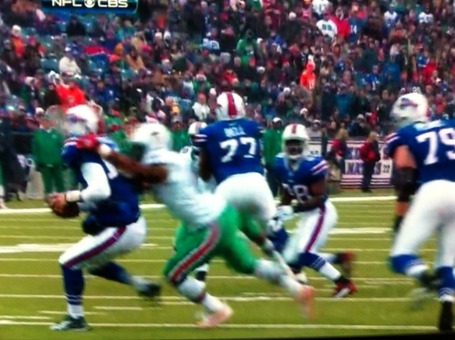 Buffalo had a quick first down to star the game, and it seemed as if they were about to get in stride, however Cameron Wake was doing everything possible to get by RT Erik Spears and sack the QB. After a holding penalty by Spears on the third play of the drive, Wake looked to take advantage of Spears’ conservativeness on the very next play. After 3 seconds of being held, Wake managed to get inside Spears and reach Fitzpatrick with only his right hand. After the sack of 10 yards, Wake drifted off from his usual sack celebration and borrowed Jason Taylor’s window smashing routine. Although Buffalo had two gains of 14 and 15 on the next two plays, they weren’t enough to get them the first down and so they had to punt it away. 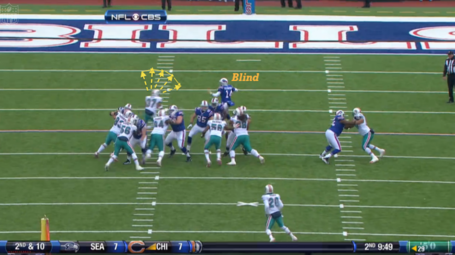 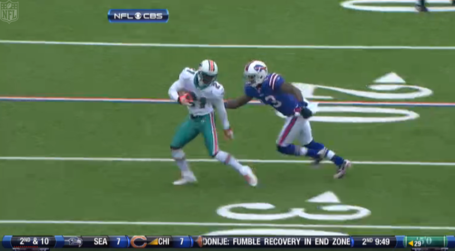 After kicking a field goal in the 2nd quarter, Miami was now up 10-7 on the Bills and looked to get the ball back immediately. After a 6-yard run on first down, Buffalo sought to catch Miami off guard and throw a quick pass to the right side. Mike Nolan, however, sensed the down-and-distance situation and called Safety Blitz on the play with Yeremiah Bell rushing the QB. This would make Ryan Fitzpatrick have to instantly react and hopefully have him force a bad throw.

As you can see, Bell is able to get into Fitzpatrick’s line of sight untouched. Scared, and unwilling to take the sack, Ryan Fitzpatrick blindly throws the ball to his intended receiver, Stevie Johnson. Unfortunately for him, Fitzpatrick could not see that Vontae Davis was right in the vicinity of where the ball was thrown (Due to Yeremiah Bell’s raised arms) and intercepted the ball, which was taken down to Buffalo’s 20-yard line. This setup another Dan Carpenter field goal and the Dolphins were now up 13-7. 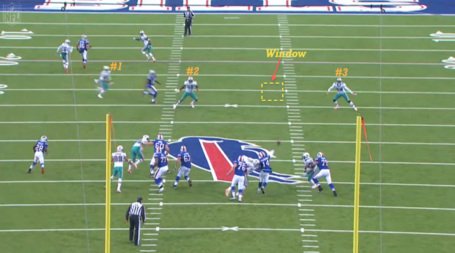 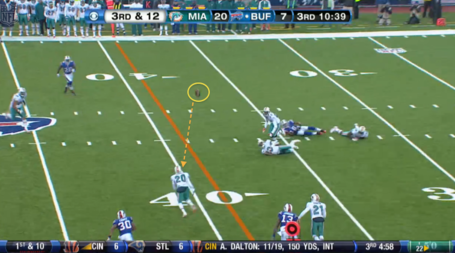 The Dolphins started off the 3rd quarter in an extraordinary fashion. After slowly reaching their own 35-yard line, Brian Daboll took off his conservative gloves and called a deep pass to Brandon Marshall, who had dropped 2 of his last 3 passes. Matt Moore’s 65-yard bomb to Marshall for a touchdown now had Miami up big on the division rival. After getting the ball to their own 49-yard line, it seemed as if the Bills were back in business, however a careless throw put Miami back in position to score.

Notice when Ryan Fitzpatrick threw the ball, he had to throw it in between three defenders and into the smallest of windows. It had to be extremely accurate and strong throw in order for the ball to get pass Sean Smith, Nolan Carroll, and Karlos Dansby. Once the ball finally got it’s supposed "destination," all three defenders were already on top of it. The ball ricocheted off the knee of Carroll and slowly drifted into the hands of Reshad Jones who came up with the sensational interception. 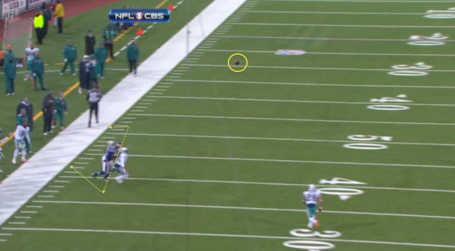 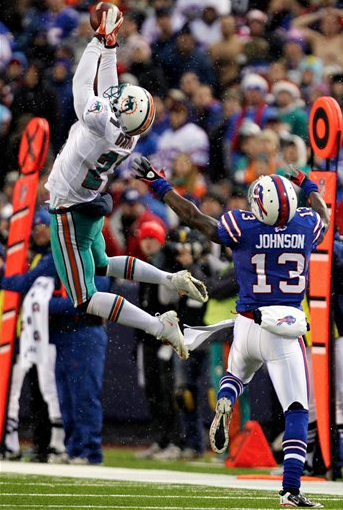 After Reshad Jones’ interception from the deflected pass, Miami was unable to do anything with the good field position and went 3-and-out. However, the intensity of the Dolphins defensive unit stayed hungry for another turnover, and who better to make a play than Vontae Davis?

Throughout the game, Buffalo didn’t really have any BIG plays down the field, and offensive coordinator, Curtis Modkins, looked to break that trend by designing a deep pass to the explosive Stevie Johnson. As you can see above, Vontae Davis acted like Dwight Howard inside the paint and completely boxed out Johnson from getting anywhere near the ball. Once the pigskin was in reach, Davis leaped into the air as a dog catching a Frisbee, and snatched the football for the amazing interception at the 40-yard line 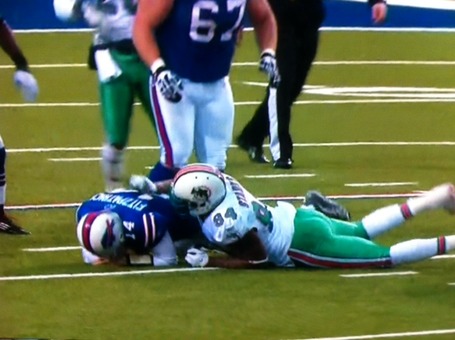 After Brandon Marshall’s 65-yard TD, the 3rd quarter of play was filled with punts and bad offensive drives. Fortunately, Miami’s defense was able to step it up and make big-time plays. After a Brandon Fields punt, Buffalo got the ball back at their own 30-yard line. After scrambling around the pocket for about 4 seconds, Ryan Fitzpatrick stepped up to throw the ball, however he did not see the 6’3" 305 lb. DT that was about to destroy him. Randy Starks was battling Andy Levitre throughout the play, but when Fitzpatrick finally stepped up to throw the ball, Starks ran him over and threw him to the floor for the sack. This play had to be replayed at least 3 times in order for everyone watching to have an "oooooo!!!" moment. The Bills would punt shortly after.