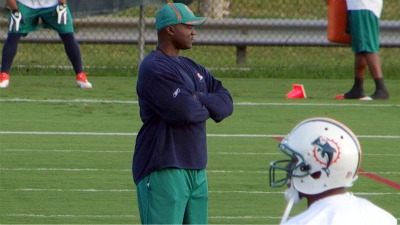 The Miami Dolphins fired head coach Tony Sparano earlier this week, promoting assistant head coach Todd Bowles to the interim head coach position for the remaining three games of the season. Bowles met with the media yesterday for the first time. Here is the transcripts of his press conference, as provided by the team.

(On how he moves forward from now after being named the head coach under these circumstances)- "I don't think you can get a head job on a 14-2 team so the circumstances are different. Me and Coach (Tony) Sparano are extremely tight. Moving forward we have a tough team. We've been in every ball game as far as that is concerned. We need to make sure we finish that way. There are no playoffs to look forward to but we have three AFC East division rivals. We're going to come out and play hard, play smart and try to win the last three."