The Miami Dolphins lost to the Philadelphia Eagles last Sunday, 26-10. Despite the score, the Dolphins defense was fairly effective against quarterback Michael Vick, tallying four sacks and an interception. They also held LeSean McCoy, who had been averaging 94.5 yards per game coming into the match up, to just 38 yards rushing on 27 attempts (a season low 1.41 yards per carry).

Let's take a look at the top five defensive plays of the week. 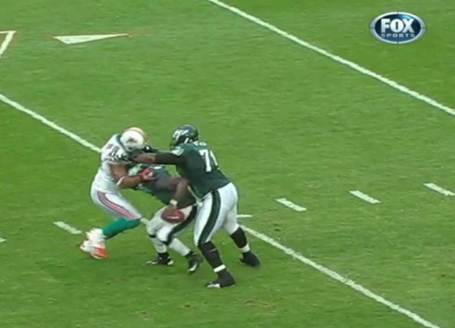 Taking the opening kick off, the Eagles looked to start fast against the Dolphins. Philadelphia quickly moved the ball from their own 20 yard line, into Miami territory, eventually reaching the Dolphins' 40-yard line. On 3rd-and-3, the Eagles were called for holding, moving the ball back to the 50-yard line, replaying the down. With a 3rd-and-13 facing quarterback Michael Vick, he dropped back to pass. Miami linebacker Jason Taylor, lining up in a four-point stance, quickly blew past the offensive line, finding a slipping Vick in the backfield, bringing him down for a 6-yard loss, and Taylor's fifth sack on the year. The Eagles punted on the next play. 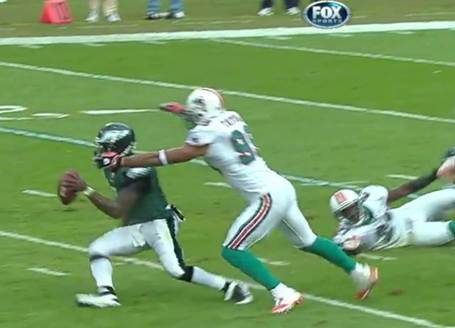 With the Dolphins scoring on their first possession - following the punt after Taylor's first sack - Philadelphia received the kickoff, looking to respond. Philadelphia moved from their own 20-yard line, up to their own 33, before a LeSean McCoy run lost them three yards on first down. After a Vick incomplete pass targeting Jeremy Maclin, the Eagles were faced with a 3rd-and-13. Now, stop me if you've heard this before. Vick dropped back to pass, with Jason Taylor lining up to rush him. This time, instead of the four-point, defensive end style stance, Taylor lined up in a two point stance, more typical of a linebacker. As Vick dropped back, pressure mounted, causing him to step forward in the pocket, before beginning to run for the line of scrimmage. Taylor, however, wasn't having any of it, and brought down the scrambling quarterback just before he could cross the line-of-scrimmage. The sack marked Taylor's second of the day, on the Eagles' first two possessions, and both on 3rd-and-13 plays, moving his season total to six, while he moved into sixth place all time on the sack list (138.5). The Eagles punted on the next play. 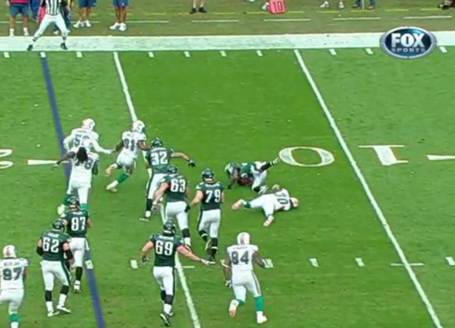 On their third possession, the Eagles were still looking to get into a rhythm. On first down, with 5:23 to go in the first quarter, Tony McDaniel sacked Vick, only to have the 10-yard loss erased when he was called for face-masking, after ripping Vick's helmet off during the tackle. On the next play, the Eagles turned to McCoy to try to find some yardage. Looking to find the edge on a right end run, McCoy was brought down for a 3-yard loss when Dolphins' safety Chris Clemons shot through the pulling blockers and swept McCoy's legs out from under him. From there, the Eagles would only continue to move backwards, eventually punting the ball five plays later from their own 10-yard line. 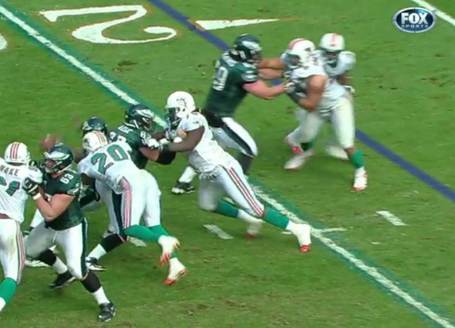 The second quarter opened much better for the Eagles, with two quick touchdowns putting the team ahead 14-7. Following a Miami fumble, Philadelphia was looking to continue their touchdown scoring ways. Starting at the Dolphins' 34-yards line, the Eagles moved down to the 18-yards line, and were looking to convert a 3rd-and-5 play, when Vick dropped back to pass. Miami safety Reshad Jones blitzed from out wide, cutting through the offensive line, and getting to Vick before he could even complete his drop. Jones, despite almost overrunning Vick, wrestled the quarterback to the ground, tallying Miami's fourth sack of the half, and keeping the Eagles to only a field goal on the drive. 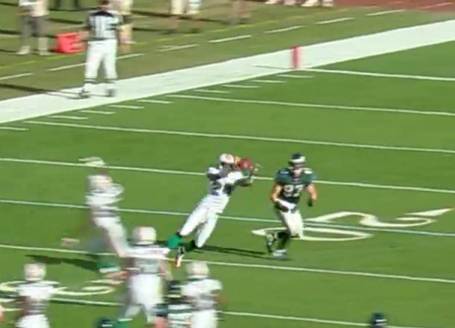 The Dolphins received the second half kickoff, going three-and-out and punting the ball back to the Eagles. Philadelphia took over at their own 44-yard line, and immediately moved into Miami territory on an 8-yard LeSean McCoy run. Former Dolphins running back Ronnie Brown carried the ball for no yards on 2nd-and-2 for the Eagles, before Vick completed a 7-yard pass to Jason Avant for the first down. On the subsequent play, McCoy was again giving the ball, this time being tackled at the line of scrimmage by linebacker Cameron Wake. On 2nd-and-10, Vick dropped back to pass, looking for tight end Brent Celek. However, cornerback Sean Smith stepped in front of Celek, picking off his second pass of the year. Smith returned the ball 7-yards before being tackled by Avant.