10 games, 11 months, 329 days. That's how long it's been since Miami won a regular season game. For months the Dolphins were being recognized as one of the worst teams in the NFL. Rumors of owners talking to coaches and catchphrases like "Suck 4 Luck" got into the minds of the coaches and players, and it seemed as if this team had lost its motivation to continue.

However, this past week, coach Sparano realized that it's just him and the players out on the field; no owners, no media, no rumors, just football. When Miami came in to battle Kansas City in Arrowhead Stadium, they didn't care about how the season was going so far, all they cared about was beating a team that had just won 4 straight.

Not only did the Dolphins beat the Chiefs, they embarrassed them in there own house. Miami came in with a chip on their shoulder and smothered a team that had seemingly the most momentum coming into this game than anyone else. Drive after drive they made plays that even made the "suckers" leap out of their chair in euphoria. However one play in particular left Dolfans in a lost for words other than "Wow." After completing two big-gain passes to the rookie out of Tulsa, the Dolphins looked to get there first touchdown of the season from outside the Red Zone. Here's a look at Anthony Fasano's big 35-yard TD touchdown catch. 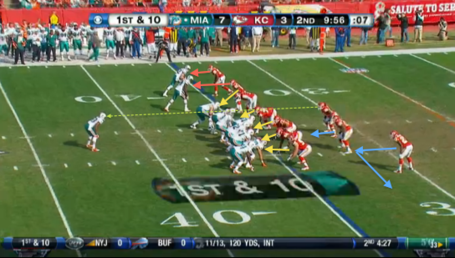 Miami comes out in an "Ace Formation," but with a little twist to it. Two receivers are lined up to the left of Matt Moore and the second TE is lined up to the right. First thought on the play…. RUN TO THE RIGHT! Fortunately, Matt Moore’s Manningesque instincts kicked in before the snap and he noticed that there were 3 Linebackers all bunched up to the right expecting the run. Moore calls an audible on the play and changes it to a bootleg deep pass to Anthony Fasano down the left sideline.

At the top of the image we see Brandon Marshall and Brian Hartline covered by Brandon Carr and Brandon Flowers. Both Marshall and Hartline are going to run slants to the inside to leave the left side open for Fasano; Hartline will go deep to distract the safety (Kendrick Lewis) and Marshall will go middle to distract the Linebackers. A big reason why this play was successful lies in the back-to-back 20+ yard gainers that Charles Clay had before the play. The defense suspected that they might want to go to him a third time, and disregarded Fasano.

Speaking of defense, the Chiefs are lined up in a 4-3 over defensive set with 5 rushers placed at the line. Tamba Hali will be blitzing the left side while Derrick Johnson, Jovan Belcher, and Donald Washington all play zone. Kendrick Lewis is playing deep zone coverage as well, but we all know how that turned out. And the play begins. 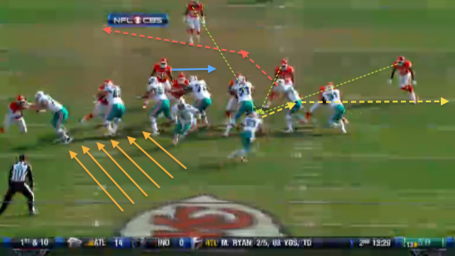 1. Immediately after the fake, all four zone defenders eye down Daniel Thomas, expecting a screen.

2. Because all linemen are pushing to the left, it appears as if Fasano is part of the group and doesn’t intend to go anywhere but to block.

3. Both the "screen" and the "Linemen Camouflage" make Derrick Johnson (#56) slide over to the right to prevent a pass to Thomas, allowing Fasano to break out deep to the left side. 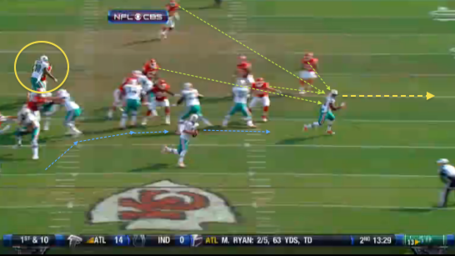 Now that Matt Moore is finally rolling out to his right side, all of the attention is focused on Daniel Thomas. Moore knows he has an open DT33 who can take the ball 15-20 yards down the field, but he quickly realizes that his audible panned out beautifully by noticing that Fasano is going to have no one covering him. But how?

To the left of the frame Brandon Marshall has made a solid block on Brandon Flowers allowing there to be open grass to the left. Also, Derrick Johnson backed off from his zone coverage and shifted his whole body towards Daniel Thomas, allowing Anthony Fasano to escape with ease.

Side note: Notice how the O-Line is able to give Moore the protection and space he needed to completely satisfy the play. Jake Long, Richie Incognito, Mike Pouncey, Vernon Carey, Marc Colombo and Charles Clay were all a critical part in order fro this play to succeed, and you can see it there. 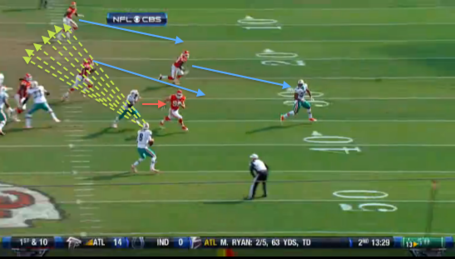 Once Matt Moore firmly plants his feet, you can notice that he never had the intention of throwing it to Daniel Thomas in the flat; Anthony Fasano was his MAIN target, and he was wide open on the play….but more from that later.

Don’t get me wrong; throwing it to DT33 wouldn’t have been a bad idea either. Actually, about 99% of the people watching the game (including me) expected the ball to go Thomas who seemed to be wide open. However, as my SAT teacher used to say, "At times there might be two right answers, you just have to find the BEST of the two" and in this case the "Best of the two" happened to be running down the left sideline begging for the ball. But once again, more from that later.

On the play, Daniel Thomas is used as the big distraction. Not only was he able to draw the attention of all the linebackers, but he was able to force the deep safety (Kendrick Lewis) away from his coverage as well.

Side note: Charles Clay comes up big once again on the play by pushing away Andy Studebaker away from Matt Moore giving him an even safer pocket to throw in. 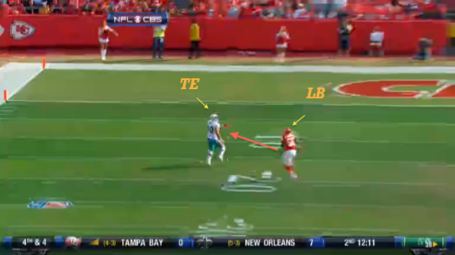 What!? Is Anthony Fasano really that open? Is a Linebacker really trying to cover him? Yes and yes. Quickly after Frame 3 Fasano was able to sneak away from coverage and sprint down field, which was left open thanks to Brian Hartline, Brandon Marshall, and especially Daniel Thomas. About three seconds after Fasano drifted away, Derrick Johnson had an "Oh no!" moment in which his eyes burst out of his head as he tried to catch up with the sneaky TE. Unfortunately for the Chiefs, Dolfans have known for years now that when a linebacker is put up against a TE who just so happens to be 5 feet ahead of him, the linebacker will usually lose that battle. 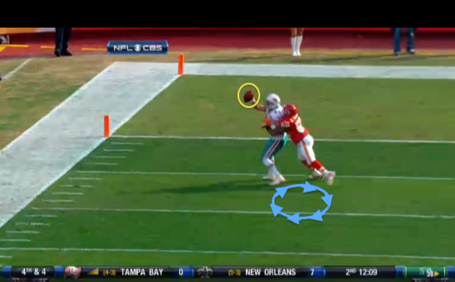 At first glance it seemed as if Fasano was celebrating before actually scoring the touchdown by putting his hand in the air, however he knew that a 243lb Linebacker was coming his way and that it was going to take a lot of strength and length to get those last 6 yards. So, Anthony shifted his body 360 degrees in order to face the end zone, which then allowed him to stretch out his arm an extra two feet and use his big body power in for 6.