Last week, we introduced a new segment to the Phinsider, the Gillette ProGlide Defensive Play of the Week. Continuing that series, we take a look today at the Top 5 Defensive Plays from the Miami Dolphins Week 12 loss to the Dallas Cowboys. 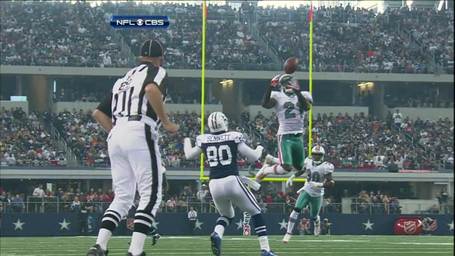 The Dolphins kicked off to open the game, with the Cowboys running the first offensive series of the game starting at their own 20-yard line. After a one yard pass to Dez Bryant, quarterback Tony Romo found Laurent Robinson for 9 yards, giving the Cowboys a first down at their own 30. The Cowboys then tried to find some running room, with DeMarco Murray gaining two yards, before a Sean Smith pass interference call moved the Cowboys into Miami territory. Dallas continued to move the ball, with Murray gaining 4 yards on a left tackle run. On 2nd-and-6 from the Dolphins 39-yard line, Romo dropped back, looking for Martellus Bennett on a go route down the sidelines. As Bennett ran up the sidelines, cornerback Vontae Davis, with help over the top, undercut the pass, tipping it up to himself, before returning the interception 25 yards. 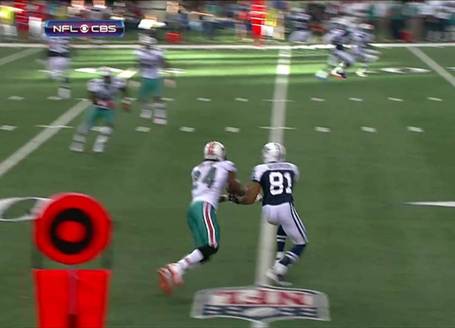 With 6:08 to go in the first quarter, the Cowboys got the ball back after a Dolphins punt, starting the drive on their own 3-yard line. Dallas then proceed to run the ball on first and second downs, gaining 11-yards, and a first down. From the Dallas 14 yards, Romo dropped back to pass, looking for Robinson on a 12-yard go-route. This time, it's Sean Smith that steps in front of the receiver, coming away with Miami's second interception of the game, leading to the Dolphins first points of the game, taking the lead 3-0. 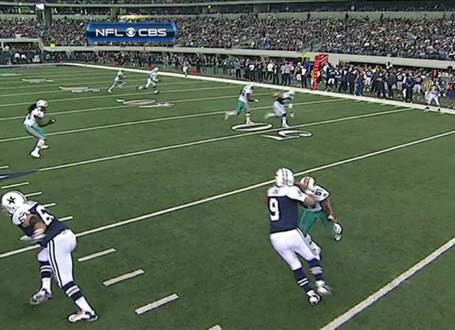 This play may not have had the immediate results the interceptions have, but it was a great play. With the first quarter coming to an end, the Cowboys were moving the ball. Starting at their own 15-yard line after the Dolphins scored, the Cowboys were looking to respond following the Smith interception. Dallas started with a 3-yard Murray run, followed by a 22-yard pass from Romo to Robinson. With the ball at their own 40-yard line, the Cowboys again turned to Murray, who gained 10 yards on two runs to move the line of scrimmage to the 50. With the Cowboys looking to continue the momentum they were gaining, the lined up again, snapping the ball with just 0:12 to go in the quarter. Romo took the snap, faking a run to Murray, and attempting to bootleg to his right. Cameron Wake, coming off the offense's right side, took one step toward the fake before diagnosing the play and correcting toward Romo. The quarterback immediately started looking for tight end Jason Witten in the flat, but realized, Wake and Karlos Dansby had that covered, and Wake was closing fast. Romo then attempted to side step Wake, but did not have a chance to get past the linebacker. Wake brought Romo down for an eight yard sack. After the sack, the Cowboys would have an incomplete pass, a 12 yard gain (on 3rd-and-18), a five-yard false start from punt formation, and a punt. Wake's sack ended any momentum the Cowboys were gaining at the end of the first quarter. 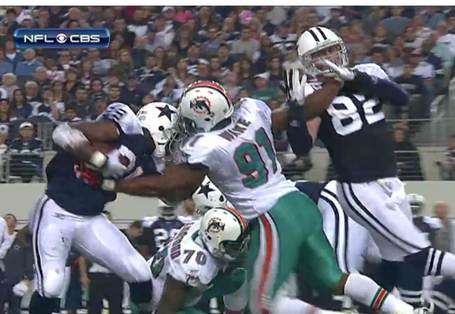 Wake was not done with getting into the Dallas backfield. Later in the second quarter, the Cowboys were once again driving, having started at their own 38-yard line, with a 2nd-and-6 play from the Miami 29-yard line. Romo handed the ball off to Murray, who started to run up the middle, before attempting to bounce it outside to his right. The mistake was running towards Wake. Cameron collapsed the Dallas offensive line, driving Witten parallel to the line of scrimmage, and right into where Murray wanted to go. Releasing from the block, Wake then found Murray and wrestled him to the ground for a 5-yard loss, and again ended the Dallas threat to the endzone. The Cowboys would eventually get the ball to the Miami 14, but would settle for a tying field goal, with Wake again being the one responsible for ending any momentum the team had. 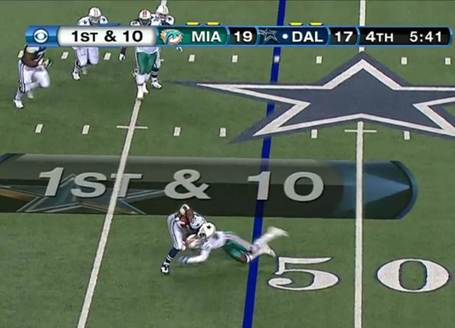 With just over 7-minutes remaining in the game, and Miami leading 19-17, the Cowboys got the ball back, looking for an answer to the Dolphins' field goal. The Cowboys rot the ball on their own 26, and immediately started moving it. A 4-yard pass from Romo to Robinson was followed by am 18-yard pass to Murray. The Cowboys came right back to another Murray pass, looking to continue the move forward. However, linebacker Kevin Burnett had a different idea. Murray caught the ball on a drag route, about two-yards behind the line of scrimmage. Burnett, meanwhile, was about 6 yards away from the running back. The linebackers was not going to let Murray get another big game, quickly closing in on the running back, and stopping him for a 1-yard loss. While the Cowboys would eventually win the game on their next possession, Burnett's tackle essentially ended the Cowboys drive, with Dallas having two incomplete passes, three penalties, and a punt on 3rd- and 4th-downs.

Now, it's up to you. Which one of these five plays was the Dolphins' Gillette ProGlide Defensive Play of the Week?