On a beautiful Thanksgiving day, the Miami Dolphins traveled to Dallas to take on the Cowboys in what was meant to be a great showdown. Both teams were riding on a lot of momentum, losing zero games in the month of November, and were looking to make it four straight. Unfortunately for the Dolphins, all streaks come to an end.

After failing on Red-Zone opportunities one after the other, Miami figured if they were to score a touchdown, why not make it from outside the "Dead-Zone." The Dolphins were stuck in a 3rd and long situation and a Brandon Fields sighting was among us, however a strike to Brian Hartline down the left sideline had them back in business. Due to the lack of Red-Zone efficiency, Brian Daboll figured he would take a shot deep down the field with a "Go big or go home mentality." Miami was able to get fans off their Thanksgiving plates and yell in euphoria after seeing what had just occurred. So with all that being said, let's take a look at the play of the year. 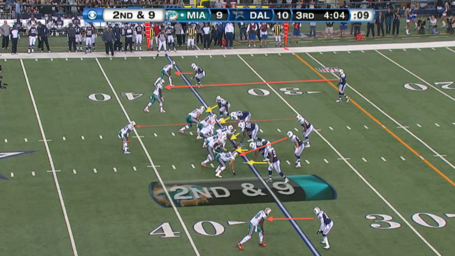 Miami comes out in a typical Single-back formation with Davone Bess lined up to the far left, Charles Clay lined up in the "Slot" as a receiver, and Brandon Marshall lined up to the right. Due to the personnel placement (Two TE’s and a lone halfback), you would think the Dolphins would have a play set up for Reggie Bush; maybe a run to the right or a quick screen to the left with Clay and Bess blocking. The threat of Reggie Bush and the formation the Fins’ line up in leads us to the first key of the game, but more from than in a bit.

On the defensive front, the Cowboys line up 4-3 under defense, however instead of two safeties playing deep, Rob Ryan moves Barry Church in to play a very deep man-coverage on Charles Clay. To the left of Church, both Linebackers near the hash (Sean Lee and Bradie James) will be playing "man" as well; Lee on Anthony Fasano and James on Reggie Bush. As for the remaining DB’s, Terrance Newman will be playing "man" on Marshall, Mike Jenkins will doing the same with Bess, and Abram Elam will be playing deep zone coverage (Not shown on frame). And so the snap begins.

**NOTE: On the play, Davone Bess will be running a "deep-in" at the 23-yard line, Charles Clay will be running a quick slant to the inside, Reggie Bush will step two yards to the left in case of a dump-off pass, Anthony Fasano will run a "deep-out," and lastly Brandon Marshall will a run a simple "Go" route. On the Cowboys D-Line, linebacker Anthony Spencer will be blitzing the strong side. 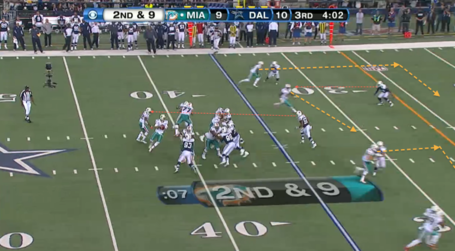 For the past few weeks, Charles Clay has earned the respect of Dolfans around the Nation. His ability to make plays without even having the ball in his hands is outstanding. Slowly but surely, Clay is starting to become a target that defenses must prepare for due to his blocking and catching capability. Why do I mention Charles Clay? You’ll see in the next frame (But you can kind of assume why from this frame)

As you can see Bradie James is creeping up a couple yards in order to stop Reggie Bush and Sean Lee is battling with Anthony Fasano to the right, leaving no linebackers left to cover the middle of the field. At the bottom of your screen you can see Brandon Marshall slowly drifting away from Terrance Newman, which we all know is THE MAIN KEY to the play, but as the saying goes…"more from that later."

**NOTE: Notice how Matt Moore’s pocket is getting smaller and smaller, making it difficult to throw an accurate deep pass. 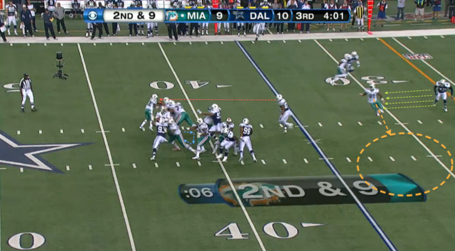 2) Anthony Fasano’s "Deep-out" makes Sean Lee drift away from the middle as well.

3) Because of Barry Church’s extremely deep coverage, Charles Clay’s slant route allows there to be about 3 yards of separation from Church and him. This turns out being one of the crucial keys in this play succeeding.

**NOTE: Again, the pocket is now getting tighter leaving Moore little room to step up and make an accurate pass. 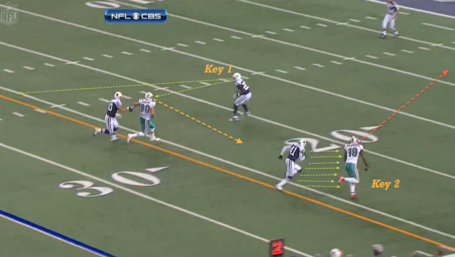 Thankfully, CBS is able to give us an extremely good view on what was happening on the right side throughout the play, which is much appreciated. Back to the play. Notice how two "keys" were marked next to Abram Elam and Brandon Marshall. First let’s take a look at the first key.

KEY 1: The moment when Charles Clay got open, is the moment where hesitation hit the mind of Abram Elam. His first instincts are to move forward in order to stop a big gain from Clay, supposing he gets the ball. Once Elam moves forward however, he notices that Anthony Fasano might get open as well, which even furthers his hesitation process leaving him with a quick decision to make. However, Elam never noticed what was happening behind him, which leads us to "Key 2."

Key 2: Brandon Marshall's (6'4" 230 lbs.) quick move to the outside allows him to get in stride and beat Terrance Newman (5'10"193lbs.) by a surmountable amount, and due to Elam’s in-decision, Marshall is now completely wide open, and it all depends on the throw. 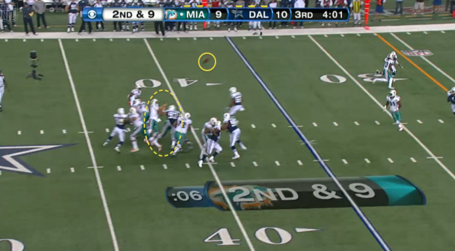 As you can see, Jay Ratliff is able to get enough room off his blocker to be able to hit Matt Moore’s right hand just when he threw it. The lack of blocking at the line could have definitely ruined a perfectly called and designed play. This has been a rarity, seeing as for the last 3 weeks the offensive line has played superior to its opposing D-Linemen. 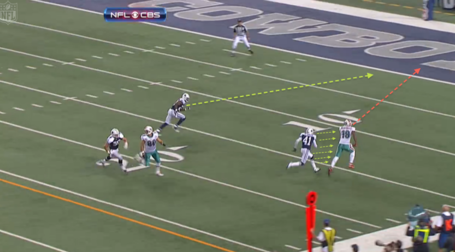 Now that the ball was thrown, Elam quickly notices the ball is intended for Marshall and Terrance Newman was completely beat on the play behind his back, making him sprint across the field in an attempt to stop Marshall. Unfortunately for Elam, too much ground was lost on the in-decision. Marshall now has the advantage on the play, having Newman trail him by a couple of yards. 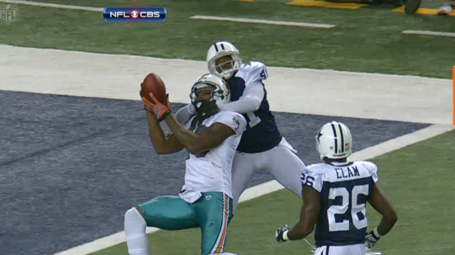 Although Moore’s pass is a little under-thrown due to Ratliff’s hit, Marshall is extremely able to make up for it by making one of the best NFL catches of the year so far. Newman tried to put Marshall in a sleeper hold before he got to the ball, but we all know that you cannot tame a monster.