Have you ever heard of anything called a "3-game win streak?" I haven't, and neither have Dolfans around the country for a couple of years. Coming into week 11, Tony Sparano had one thing in mind; win or go home. A win still gave Miami the smallest of chances at even thinking about a shot at the playoffs, so again I say "win or go home."

On Sunday, the Dolphins came out with a certain swagger about them that frightened the Buffalo Bills, who were left injured and depressed after Miami steamrolled over them with a high powered offense the first half and a hard hitting defense the second half. After Miami took the lead with an Anthony Fasano touchdown, Brian Daboll called a play which would have everyone watching in awe. This play led Miami down the field and helped acquire the 14-3 lead heading into the 2nd quarter. With all that being said, let's take a look at the momentum changer which was, the Charles Clay catch. 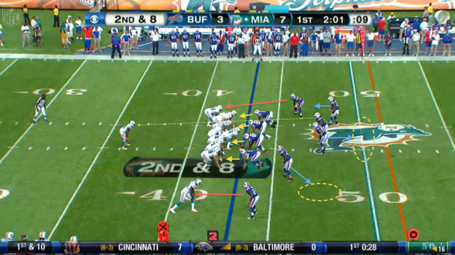 The Dolphins come out in an "H-Back" set with Reggie Bush being the lone running back and Anthony Fasano & Charles Clay lined up next to each other as Tight Ends. However, instead of bringing in the extra Wide Receiver on the play, Miami brought in Jeron Mastrud to help out Marc Colombo with his block.

On the play, Brian Daboll called a simple play-action pass with Reggie Bush coming off the fake for a screen, both Anthony Fasano and Brandon Marshall doing a short post cutting in at about the 43-yard line, and finally Charles Clay streaking down the left sideline in hope for a wide-open spot.

On the defensive front, the Bills line up in a 4-3 under defense (Line backers shifted to the strong-side), but instead of bringing in a FS to play deep, they bring in the rookie corner out of North Carolina, Da’Norris Searcy (#25) to play shallow zone at the 50-yard line. This turns out being a BIG factor later on in the play, but more from that in a bit. On the play, all three linebackers (Kelvin Sheppard, Nick Barnett, and Byron Scott) will play shallow zone, with Barnett playing more to his right, eyeing down Reggie Bush along the way, Sheppard more to the middle, and Scott playing more towards Brandon Marshall.

**NOTE: Miami brings in the extra blocker (Jeron Mastrud) to fully secure the pocket so that Matt Moore has enough time to air it down the field. 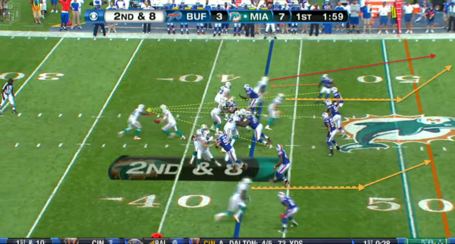 Over the past few weeks, Reggie Bush has shown his brilliance running the ball; tearing up defenses left and right, and making them game plan for his explosive ability. As you can see, Matt Moore fakes the handoff and 4 defenders (Da’Norris Searcy, Kelvin Sheppard, Nick Barnett, and Byron Scott) immediately turn their heads towards Reggie, expecting the run. Now, the one defender that Moore HAD to fake out on the play was Searcy, because with him being caught in-between the 50 and the 45, it left Anthony Fasano and Charles Clay get covered by only one player (Drayton Florence).

To the bottom of the frame, Brandon Marshall makes a quick jump off the line and quickly gets inside of Terrence McGee, forcing the deep safety, Jairus Byrd, and Byron Scott to head in his direction. This is key to the play because now the whole left side is going to be left open with both Charles Clay and Anthony Fasano being covered by a single CB. 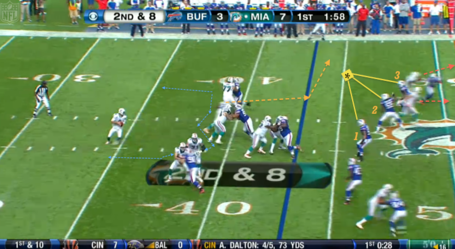 At this point, Miami is now certain that the play should result in a big-gain. After finally setting up his feet at the 35-yard line, Matt Moore makes a quick look to his left side, making Searcy, Barnett, and Sheppard drift away from their coverage and head toward the line of scrimmage to stop the dump-off pass to Reggie Bush. Once this happens, both Charles Clay and Anthony Fasano are able to break away from the defensive zone coverage and streak to the left to find some open field.

This is where Daboll’s incredible play calling finally comes to effect. Because there is only one defender left to cover both Fasano and Clay, Fasano’s short inside-post leaves Drayton Florence with a big decision to make. "Should I head towards Fasano, who’s already caught a touchdown pass and seems to be a favorite target of Matt Moore, or should I keep playing man on Charles Clay?" Well, because there was a safety playing deep, Florence makes the "right" move and stays back with Fasano at the 40-yard line. However, what Florence didn’t know was that Jairus Byrd was not playing deep zone coverage anymore; he was concentrated on Brandon Marshall’s post pattern over the middle.

***NOTE: Notice how much time and space Matt Moore has to make the throw. He has about a 5-yard radius pocket, making receiver no sense of urgency or pressure at all during the play. 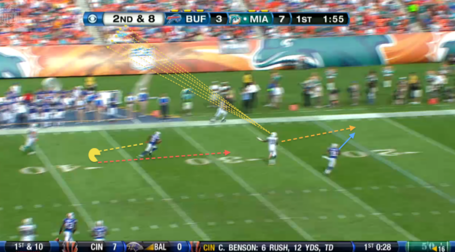 It looks like Florence made the wrong move by getting off his man. After he notices the pass was never intended for Fasano, Florence tries to make a quick turn-around to get to Clay. Unfortunately for him, he was separated by too much grass and could not keep up. The play now rested in the hands of Jairus Byrd who seemed to have gained enough ground to make a play, meaning Matt Moore’s pass had to be dead-on accurate, or the beautifully designed play would have been wasted. 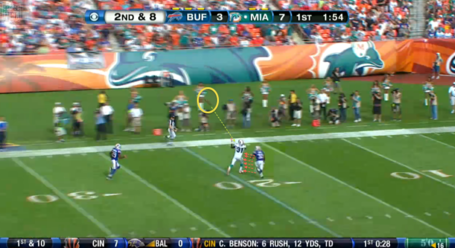 Whoever did not say "wow!" after the catch must have been a Bills fan, because it took a tremendous amount of skill and concentration to make that pitch-n-catch. The whole play-action, the whole fake, the whole delivery all came down to 1 yard at the end…1 yard! Byrd was quick to Clay, but the ball was just placed perfectly in the hands of Clay for Byrd to having anything to do with it.

We all know what happened at the end. Miami capped off the drive with a touchdown from Reggie Bush, Matt Moore delivered wo more touchdowns at the half, and the defense played the role of a closer by literally wrecking the lives of the Buffalo Bills; not letting them get any sort of momentum on the game.

The Dolphins now play the player-factory Cowboys on Turkey day and they will need to play like this or even better to get the W. I’m sorry the post took a while to come and was a little short, but I hope this is sufficient. To all of you, have a happy Thanksgiving and great Dolphins game!

P.S: Click on the frames to make them larger.