The Miami Dolphins dominated the Buffalo Bills this past Sunday, with several defensive plays standing out as the Defensive Play of the Game. With that performance, I happy to welcome Gillette ProGlide on board to sponsor a new weekly post where we look back at the top five defensive plays of the game.

This week has a ton of plays that could be nominated. It's always a good thing when that happens. Make the jump to see the nominees and to vote. 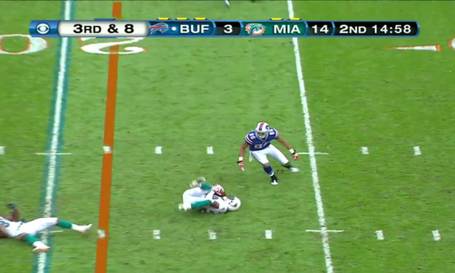 Defensive Play #1: The first nominee for this week is the first play of the second quarter. The Bills had just received the kick off following Miami's second touchdown, and were looking to respond. The Bills started their drive at their own 11 after a holding penalty on the kick off. A two yard run by Fred Jackson on first down was followed by an incomplete pass from Ryan Fitzpatrick. On third-down-and-eight from their own 13, the Bills lined up in the shotgun, looking to convert. Fitzpatrick threw a bullet pass to Brad Smith on a slant route and Smith, trying to prepare for the inevitable hit, deflected the ball up into the air. Miami Dolphins cornerback Nolan Carroll snagged the ball out of the air, rolling to the ground with the interception. The Dolphins took over at the Bills 23-yard line, and 5 plays later, Charles Clay caught the ball i nthe endzone for his first career touchdown and a 21-3 Dolphins lead. 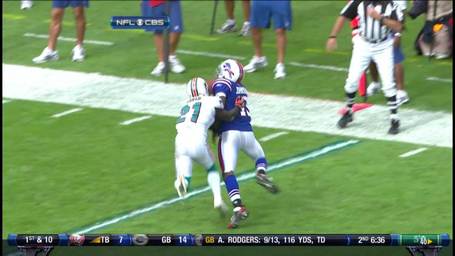 Defensive Play #2: A little later in the second quarter, the Bills started a drive at their own 9-yard line after a 40-yard Brandon Field punt. The Bills opened the drive with a 4-yard run from Fred Jackson, followed by another run, from Jackson, this time for three yards. Once again faced with a third down, the Bills lined up in the shotgun. This time, Fitzpatrick attempted to find Stevie Johnson - but, cornerback Vontae Davis had other ideas. Davis stretched in front of Johnson, knocking the ball away on what should have been a first down, leading to another Bills punt. 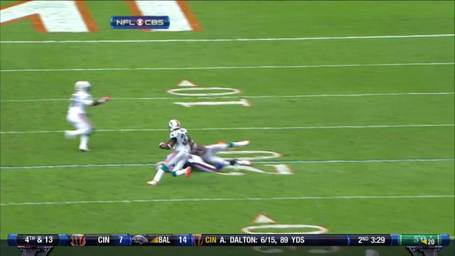 Defensive Play #3: The next Bills drive, starting at 3:10 to go in the second quarter, once again found Fitzpatrick trying to pass out of a shotgun formation. On first down, Fitzpatrick found running back C.J. Spiller, who was tackled by Will Allen for no gain. The second down play resulted in an incomplete pass as Fitzpatrick looked deep for Stevie Johnson. Clearly struggling to move the ball, the Bills' quarterback again dropped back to pass, looking for David Nelson, who was hit as the pass arrived. The ball bounced up into the air, and safety Yermiah Bell was there to take it and run, returning the ball 20-yards to the Bills four. Six plays later, Davone Bess was on the receiving end of a Moore touchdown pass, sending Miami to a 28-3 lead. 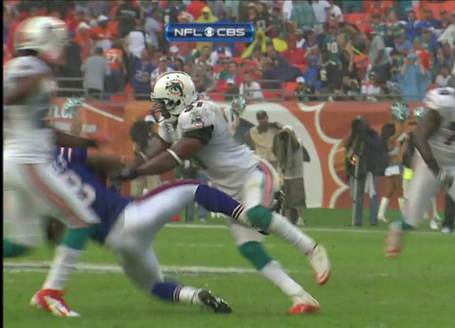 Defensive Play #4: Following the punt Chris Clemons blocked and Lex Hilliard recovered for a touchdown, the Bills were looking to finally start moving the ball. In one of their longest drives of the day (a nearly 6 minute, 11 play drive that still resulted in a punt), the Bills had the ball at the 50-yard line on a 2nd-and-7 play. Fitzpatrick lined up in the shotgun, looking for Naaman Roosevelt. The two connected on a 12-yard gain, down to the Miami 38-yard line. But, Bell made Roosevelt regret making the catch. Bell absolutely crushed Roosevelt as soon as he caught the ball, laying his shoulder straight into the chest of the receiver. 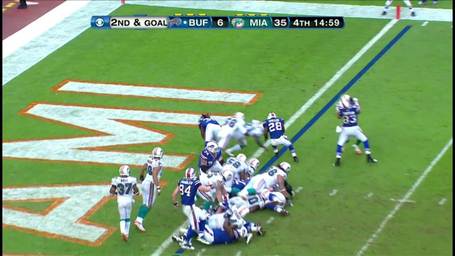 Defensive Play #5: As the fourth quarter opened, the Bills finally found themselves threatening the Dolphins defense. With the ball at the Miami 1-yard line, the Bills lined up on a 2nd-and-goal play. Running off tackle to the right, Spiller had a clear line to the endzone. Well, a clear line until Davis and Burnett crushed the Bills running back, knocking him back just before he could end the Dolphins streak of not allowing a touchdown, which now stands at 12 quarters.

Now, it's up to all of you. Which of these five plays was the defensive play of the game? Make sure you vote!

And, since you are in a voting mode, head here to vote for Charles Clay as the Pepsi NFL Rookie of the Week and here for Matt Moore as the FedEx Air Player of the Week!